evaluated. I have 3 of...
I have some TY Beanie Babies that I would like to have evaluated. I have 3 of a 4 pc set that McDonald gave with their meals in 1998 or 99 I believe. I have ERIN the Bear introduced Jan. 31, 1998, Date of Birth March 17, 1997. not sure if this is an error or not but on the Tush tag is the date 1993.I have MAPLE The Bear Introduced Feb. 27, 1997, Date of Birth July 1, 1996. Tush Tag says 1993..I have Britannia The Bear, date introduced Dec. 31, 1997, Date of Birth Dec. 15, 1997..Tush Tag says 1993.These are all in original plastic packaging. The slot opening on back has been opened in order to see the tag. Otherwise all in super shape.Would like to have your opinion as to their current worth .Will send pictures on request. Thank you.
Show More
Show Less
Ask Your Own Antiques Question
Share this conversation
Customer reply replied 3 years ago
I need an Appraiser, not a Lawyer. 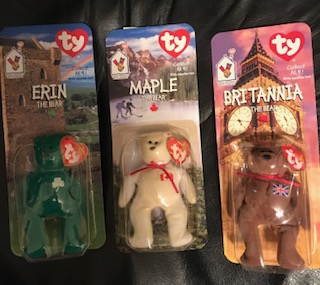 Hello, and thank you for your question. I am reviewing it now and will reply again in a moment. ~Nora

I have not found a match to all of these for you.

I will opt-out and open your question again to all the experts at no additional charge. If someone knows the answer they will post a response to you here. You do not need to re-list your question and this does not cost you extra. There is not a guarantee that you will receive a response.

I will not be able to respond back after opting-out

I do hope you find the information that you seek.

I'm hoping you just appreciate getting the truth and won't shoot the messenger (me).

There is a horrible con, a scam going on throughout the internet with regard to some previous highly collectible items from the 1980-90's. You've probably seen your bear for sale at prices in the thousands of dollars right? This raises everyone's hopes - I've even heard of families who went out and bought a car or lavish vacations anticipating they'll pay it off once they sell their $30,000 bear for even half that. A 'sure thing' right?

This is where it gets pretty disgusting. These bears never sell for the prices you see listed on various auctions and sales sites. Never. In fact, the going price for most Beanie Babies are under $20. Quite often in the $5-10 range. You see, even though there's "mistakes" - there are a lot of them. This means supply is pretty high (they are far from 'rare') and the era of high priced, long waiting lines beanies is over. This means demand is low. So, high supply, low demand = modest or very cheap prices.

Some scammers go so far as to set up what's called 'shell bidders' . They sometimes do it themselves using a different name, but often it's an associate - perhaps from a different state making it look like a good bid - but the bottom line is that ultimately no sale is actually made and a $10 beanie baby is actually not selling for $30,000 or more.

No one can pinpoint when or where this scam began, but the Snopes.com website that exposes frauds, lies and nonsense first reported their findings of it being ‘false’ on a 2016 story from the UK. I believe it began years before that though. They also blast the claims that certain Disney VHS tapes are worth hundreds or even thousands of dollars. Also ‘false’.

One way to prove this to yourself is to go to eBay and do an 'advanced search', but be sure to check the "completed listings" box . You'll see the reality of those high priced listings and get an idea of what they actually sell for.

We know that 'trolls' surf the net trying to stir things up as nameless, faceless cowards with no ethics and little character. It may be just another of their games. They have no idea how much hope it gives struggling people who think this is their lucky day. Having their hopes dashed when the truth comes out can be devastating. It's just plain wrong.

I'm sorry to deliver this news to you, but I'm on a mission to make what those low life's do wrong, right again.

A rare handful of special Beanie Babies do have high values. One in particular is called Chef Joel Robuchon, issued in August 2006. Only 200 were made and they sell, if authenticated, between $1,200 - 6,000 depending on the sales venue and condition of the bear.

# 1 Bear. Only 250 were issued for top tier Ty sales employees . I’m not clear on the year.
2010 Hong Kong Toy Fair Bear. A limited number of bears for this event are made for these fairs which makes them collectible, usually valued at up to $1,800 at best.

1993 Korean tagged Patti Platypus were only made for a short time with values now, as above, up to $1,800. This is one of the original 9 Beanie Babies ever made.

From 2001-2002 M.C. Beanie was created for a MasterCard promotion. Fun fact: It’s the only Beanie Baby with the word “Beanie” in the actual name! It can sell for up to $1,800; however, some reports claim the brown nosed bear sells for a little more. I can’t confirm this.

I found a place that I cannot endorse or comment on because I have no personal experience with them, but they claim to buy your collectibles if they are among the actual profitable collectibles out there. :

When it comes to the "teeny beanies" issued by McDonald's I'm afraid the news is even less encouraging. Despite claims around the net, there were more productions of these items than any of the others.

One of the rare, 'honest' and informed sites discussing their (lack of) value is right here:

Bottom line: I can't stress this enough - for who knows what reason a scam started several years ago giving extraordinary values to collectibles from the 1990's (mainly) and even some earlier years. Perhaps some con decided if they listed their goods at ridiculous prices and spread it around, someone would either pay that price or even half of it and they'd get away with pretty much robbing gullible individuals.

We have to look at the cold, hard facts behind collectibles: If it says "collectible" on the item or package, you can bet that everyone collected it. This means there's a huge supply of that item and the demand is likely limited to the people who already have it. This renders the collectible no more valuable than it's original sales price or even lower once the hype is over.

Many internet sites proliferate the scam by buying into the misinformation. I've seen too many to count seemingly 'official' and believable websites that just take info from the scam sources and post it as truth. They are either lazy and not interested in doing their own due diligence/research or they are equally gullible. Some authors of website information are paid per article which makes their motivation to just copy and paste as fast as they can in order to produce more articles and earn more money.

I've always been a 'mass information skeptic' who, even long before computers, would research every claim that seemed even a little bit 'too good to be true' and in nearly 100% of the investigations, it's proved right (if it sounds too good to be true, it usually is)

Verified
August Abbott and 87 other Antiques Specialists are ready to help you
Ask your own question now
Customer reply replied 3 years ago
Thank you so much for you in-depth report. Much appreciated.
Was this answer helpful?
Yes
No

LadyTanya65
Certified Antique Appraiser/ Speaker
2,500 satisfied customers
Show more
Disclaimer: Information in questions answers, and Show Less
Disclaimer: Information in questions, answers, and other posts on this site ("Posts") comes from individual users, not JustAnswer; JustAnswer is not responsible for Posts. Posts are for general information, are not intended to substitute for informed professional advice (medical, legal, veterinary, financial, etc.), or to establish a professional-client relationship. The site and services are provided "as is" with no warranty or representations by JustAnswer regarding the qualifications of Experts. To see what credentials have been verified by a third-party service, please click on the "Verified" symbol in some Experts' profiles. JustAnswer is not intended or designed for EMERGENCY questions which should be directed immediately by telephone or in-person to qualified professionals.