S. I hope you enjoyed your trip! I bought this lovely

For Robert S. I hope...
For Robert S. I hope you enjoyed your trip! I bought this lovely painting on a whim. I couldn't fully decipher the signature (possibly Jan de mie). I loved the subject matter and the professional quality framing. Hopefully it's something special! It measures 19 15/16" by 23 7/8" on the outside of the frame. Thanks, Robert!
Show More
Show Less
Ask Your Own Antiques Question 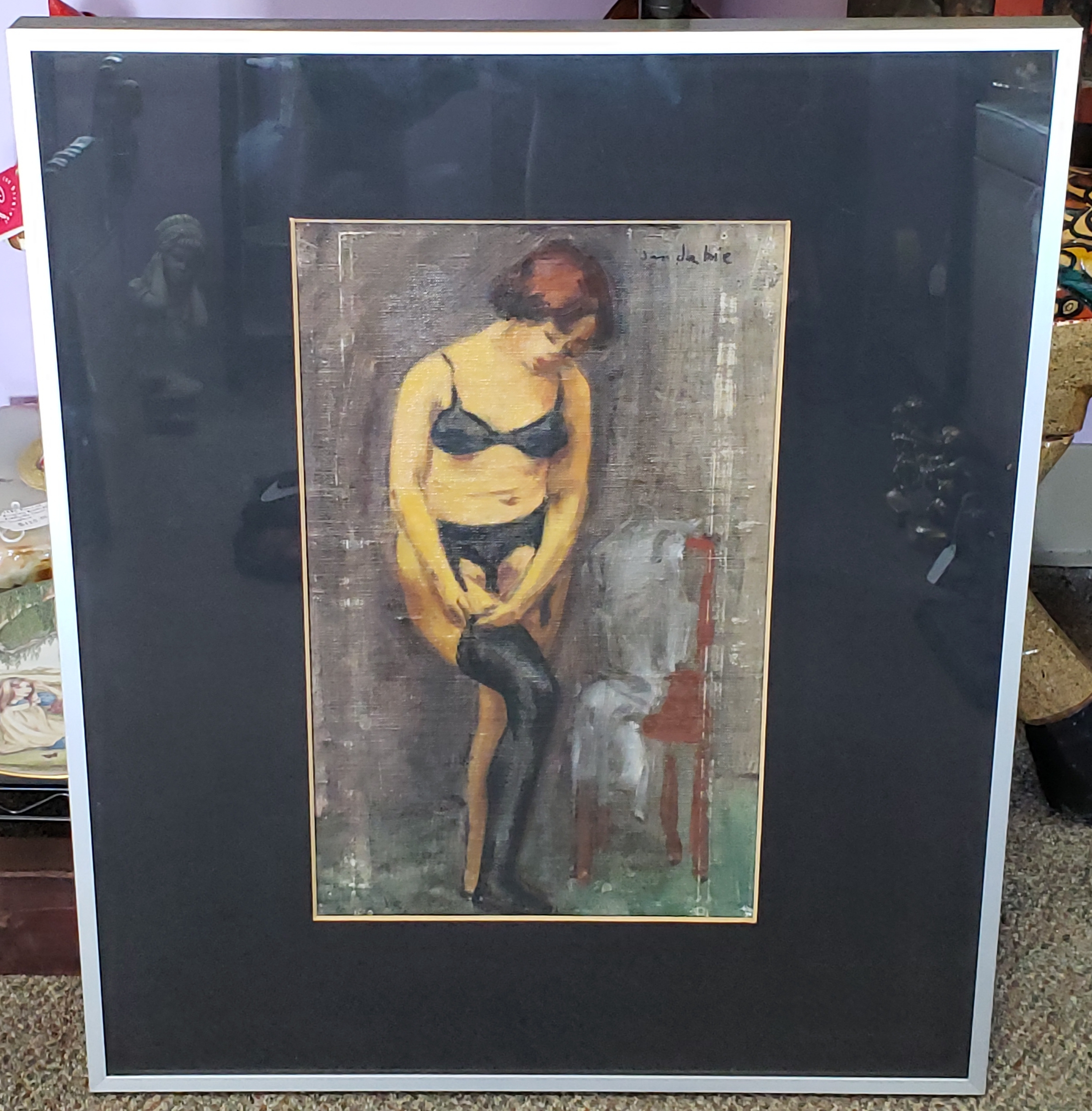 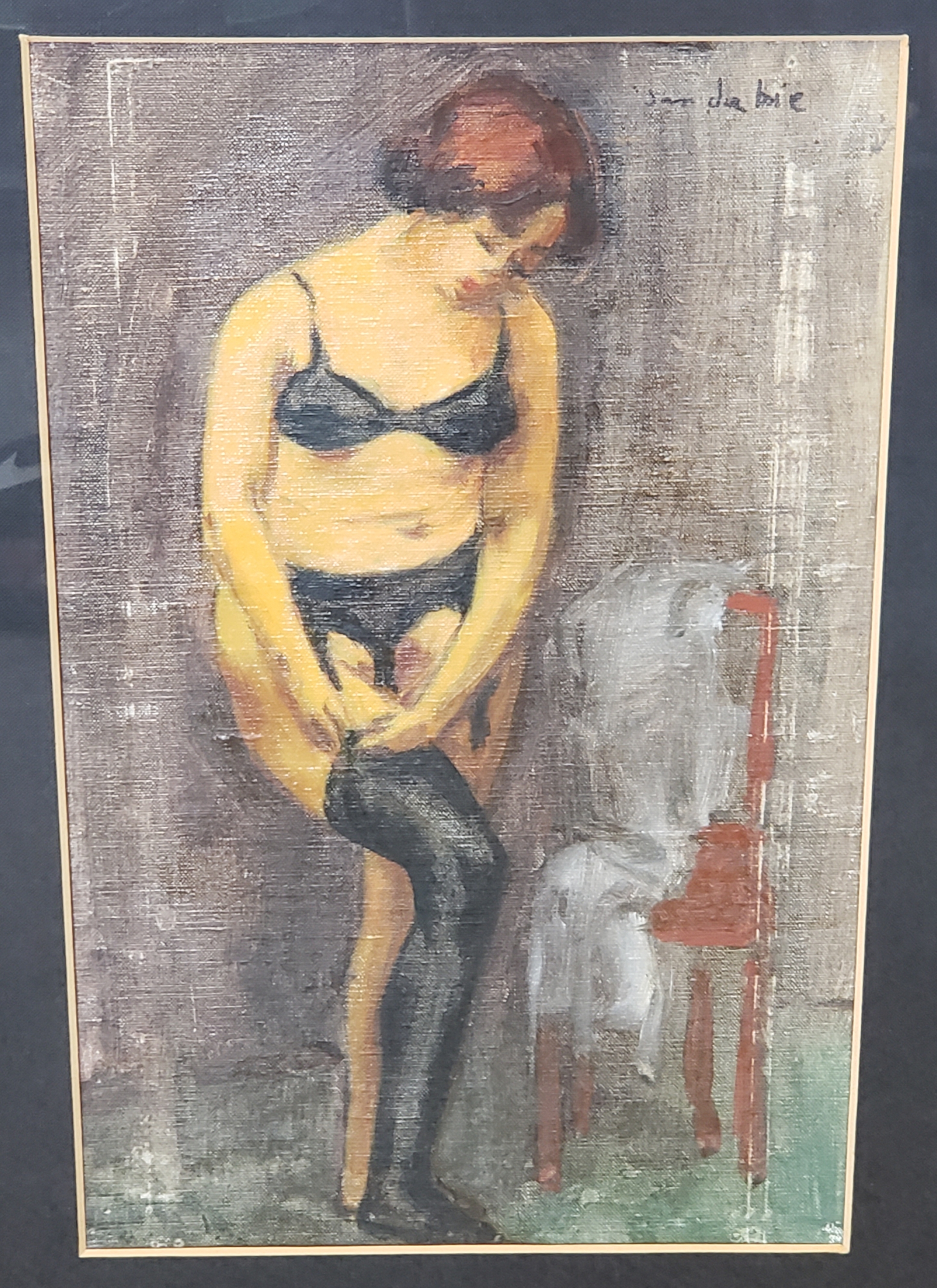 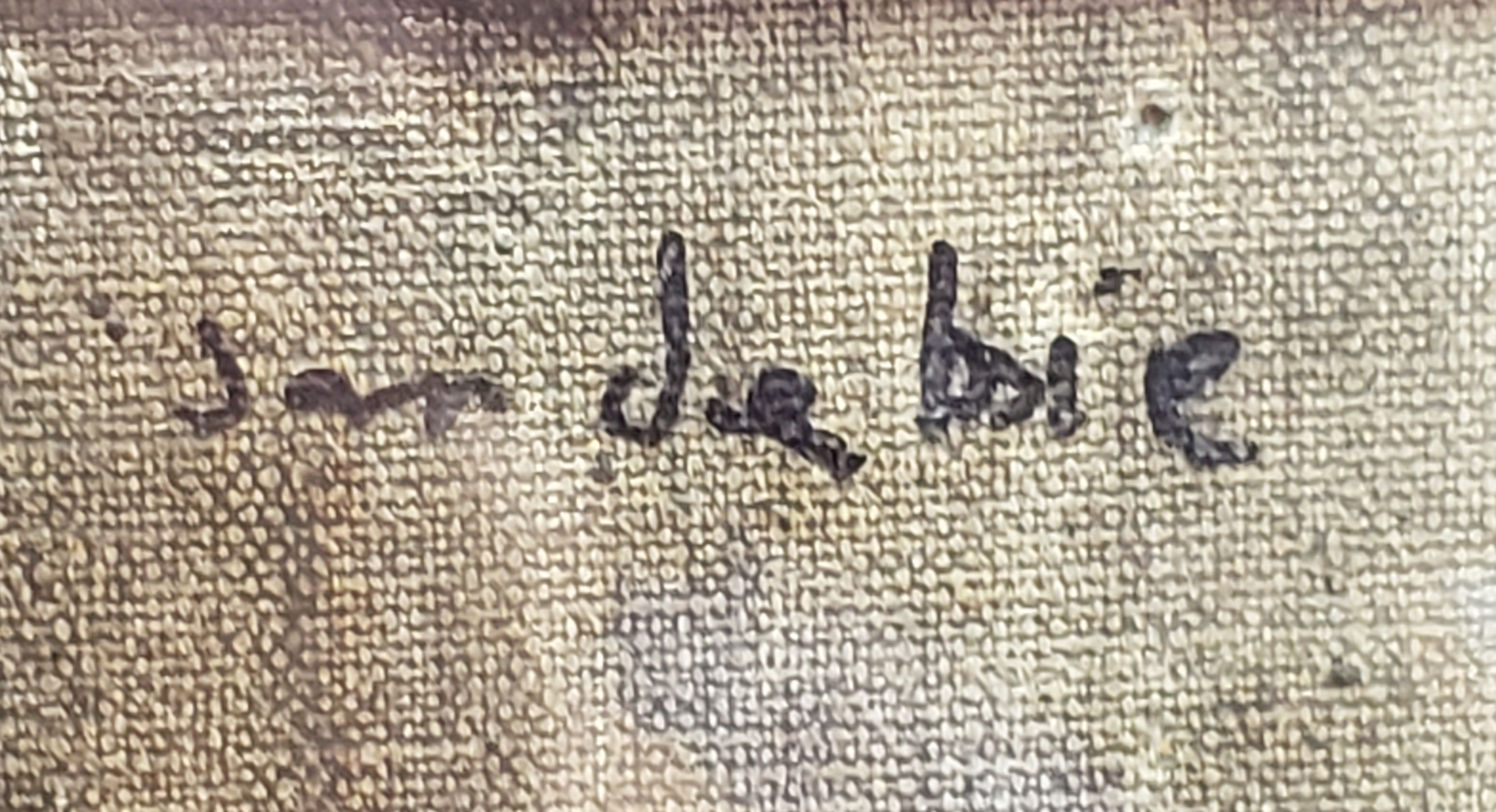 Answered in 1 hour by:
Antique Expert: Josie-ESA,  replied 2 years ago

I got back yesterday and still trying to catch up! Very nice break, thanks for asking, fully refreshed. Meanwhile, out job-hunting, I've also been offered a position that was too good to turn down so, sadly, I'll be hanging up my JustAnswer appraising hat for a while. That's not to say I won't be back, but I won't have time to do both for the next few months. It's hard to say "Bye for now" to long time customers like yourself, but in case I forget, I'd like to say a huge "thanks" now to you for all the appraisals you've sent my way. I do this work mainly because it's fun and (moderately) meaningful, and that's a great privilege, so thank you for allowing that to happen.

As for your new find, she's quite the seductress in her lingerie, though I can't decide yet whether she's putting it on or taking it off. If the latter, it's not in any great lustful abandon going by the white shift placed deliberately on the back of the chair.

The signature is baffling for me too. I can't turn it into anything close to a named and listed artist. It looks like "Jan Du Boie" to me.

It might be trying to pass itself off as Guy Pène du Bois (1884 – 1958) a heavyweight American impressionist whose signature, style and subject matter this vaguely resembles.

At best, ***** ***** describe it as 'follow of' or 'in the manner of' Pene du Bois, but there are a few features that betray a self-taught, rather than academically trained, artist. One is the choice of yellow to highlight the flesh tones (it's always more convincing to use cool colors on the light side and warm colors on the dark side when painting skin) and also the facial features and hands are a little too sketchily defined, creating a naif rather than impressionistic effect.

The balance and pose and placement are all well done and the whole composition has a peaceful quality to it.

As an original work of art, but by an unattributed artist, it would have a retail gallery value of $300-ish and as always, about 30% - 40% of this at auction etc.

Verified
Robert S. and 87 other Antiques Specialists are ready to help you
Ask your own question now
Customer reply replied 2 years ago
You've always given me a thorough, thoughtful, and very professional response that has been nothing short of excellent! I will miss getting to talk on here, but hopefully, we can catch up somewhere down the line! If you're ever in the New Orleans Area, my family's antique store is called Corner House Collections! Come stop by any time!One last thing. Before I only started referring questions to you, we used several other appraisers on this site, many of whose answers turned out to be altogether unhelpful and drastically incorrect. Do you have a personal recommendation for another appraiser on this site whom you trust in? Thanks, Robert!Enjoy your new job! Best of luck!

As far as other appraisers go, truthfully, there's no one individual who (a) offers a similarly full and detailed answer and (b) covers the range of items that I do, so you may have to shop around. Most of them will give you a fairly accurate value for an item, but not go into any great detail as to how or why, and offer comparables.

Thanks so much for your appreciative comments, and reference to your Corner House Collections. Noted! And I will certainly look in when in New Orleans!

So for now, go well and prosper, Denise, and keep having fun discovering and collecting treasures!

Robert S.
Antiques and Collectibles Researcher
BA
7,063 satisfied customers
Can U I.D. paintings and the artist signature? This painting
This painting is an original, oil on canvass; we need to I.D. the artist for an appraisal. the painting is 60 x 48 too … read more

Nora
Accredited Appraiser & Antique Expert
Post-Graduate from Christies London
32,540 satisfied customers
Show more
Disclaimer: Information in questions answers, and Show More
Disclaimer: Information in questions, answers, and other posts on this site ("Posts") comes from individual users, not JustAnswer; JustAnswer is not responsible for Posts. Posts are for general information, are not intended to substitute for informed professional advice (medical, legal, veterinary, financial, etc.), or to establish a professional-client relationship. The site and services are provided "as is" with no warranty or representations by JustAnswer regarding the qualifications of Experts. To see what credentials have been verified by a third-party service, please click on the "Verified" symbol in some Experts' profiles. JustAnswer is not intended or designed for EMERGENCY questions which should be directed immediately by telephone or in-person to qualified professionals.