S. Just posting this question for a second time. The thread…

For Robert S. Just posting...
For Robert S. Just posting this question for a second time. The thread on my other question identical to this one got closed for some reason.I have a very intriguing piece of artwork that I need some assistance with. This came out of a very prominent New Orleans Area estate recently. It is purported to be a pencil sketch copy of an etching Bernardo de Galvez. On the back side of the frame is an envelope from the galleryowned by prominent New Orleans art dealer Laurent Uter, who from my research, I discovered was the preeminent dealer in New Orleans during the 1870's and 1880's. There is a pencil notation on the back of the frame indicating the original etching was done by one Joachim Insarda of Madrid in 1781. I have gotten the best pictures I could of the signature and additional writing beneath the portrait. I would love to know if this was a work actually done by hand by Laurent Uter, was it framed by him, or does it predate his time entirely. It measures 11 1/16" by 14 1/4" on the outside of the frame. It measures 6 1/8" by 8 3/16" on the inside of the matting. Any info is appreciated. Thanks in advance, Robert!
Show More
Show Less
Ask Your Own Antiques Question 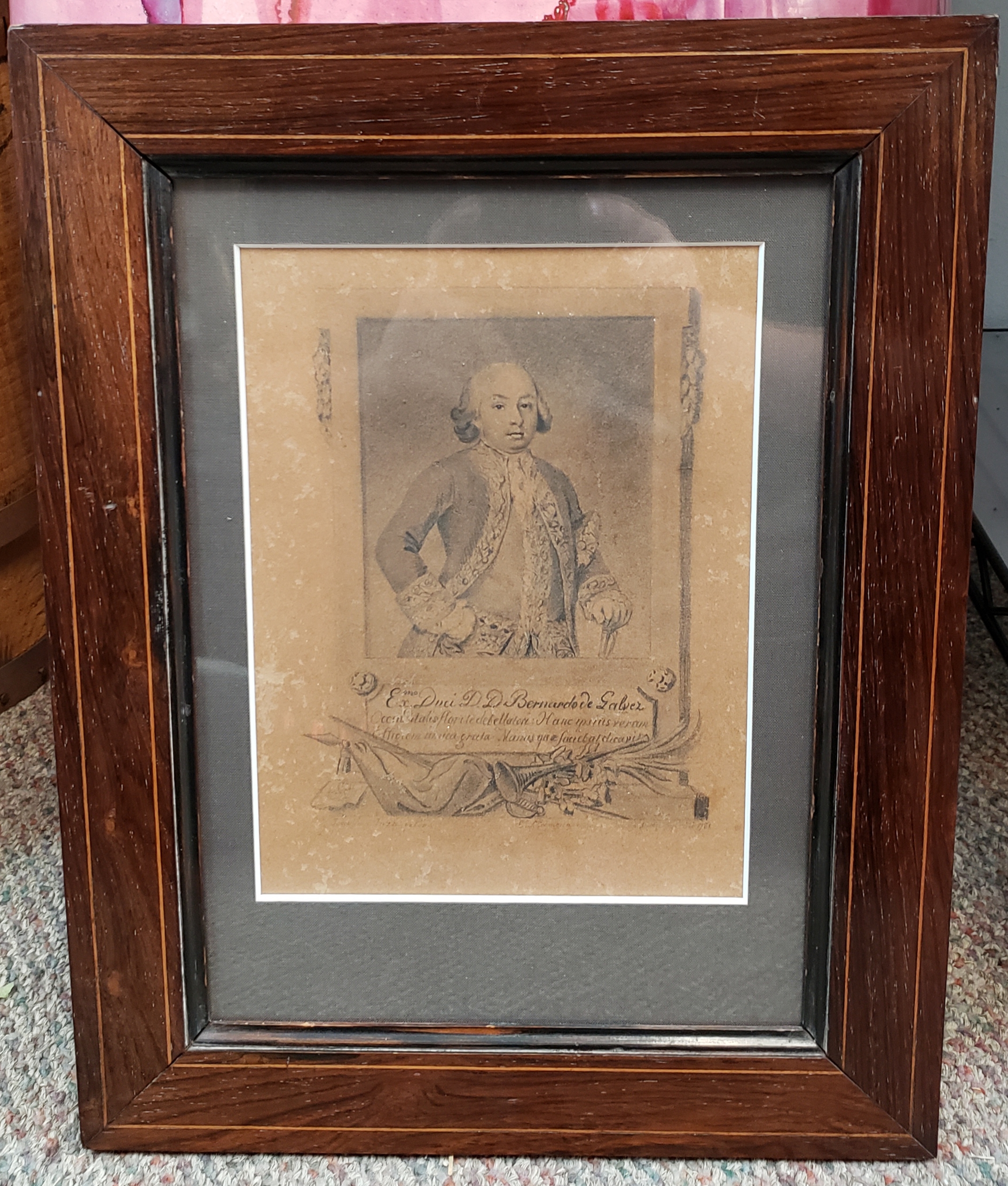 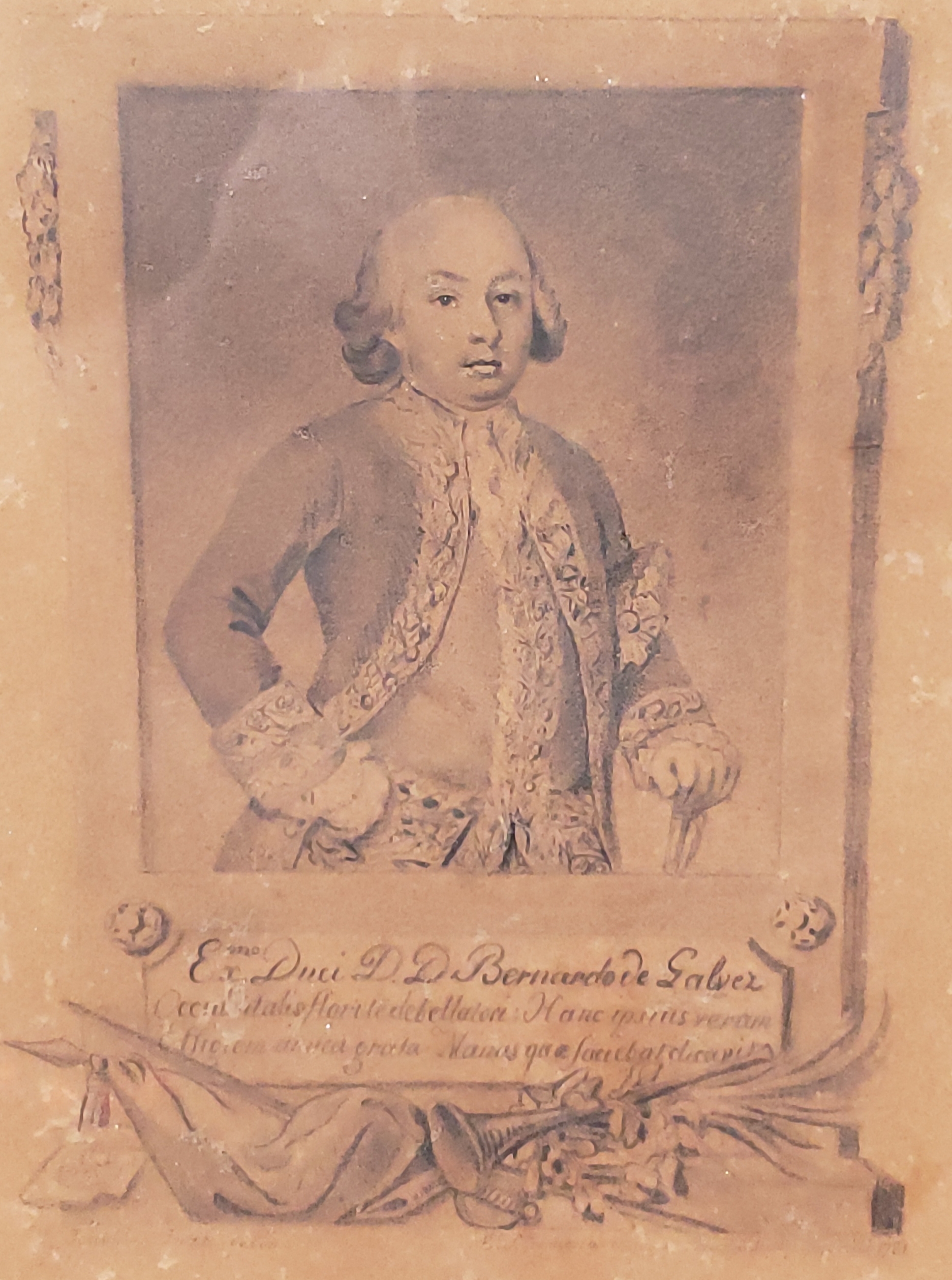 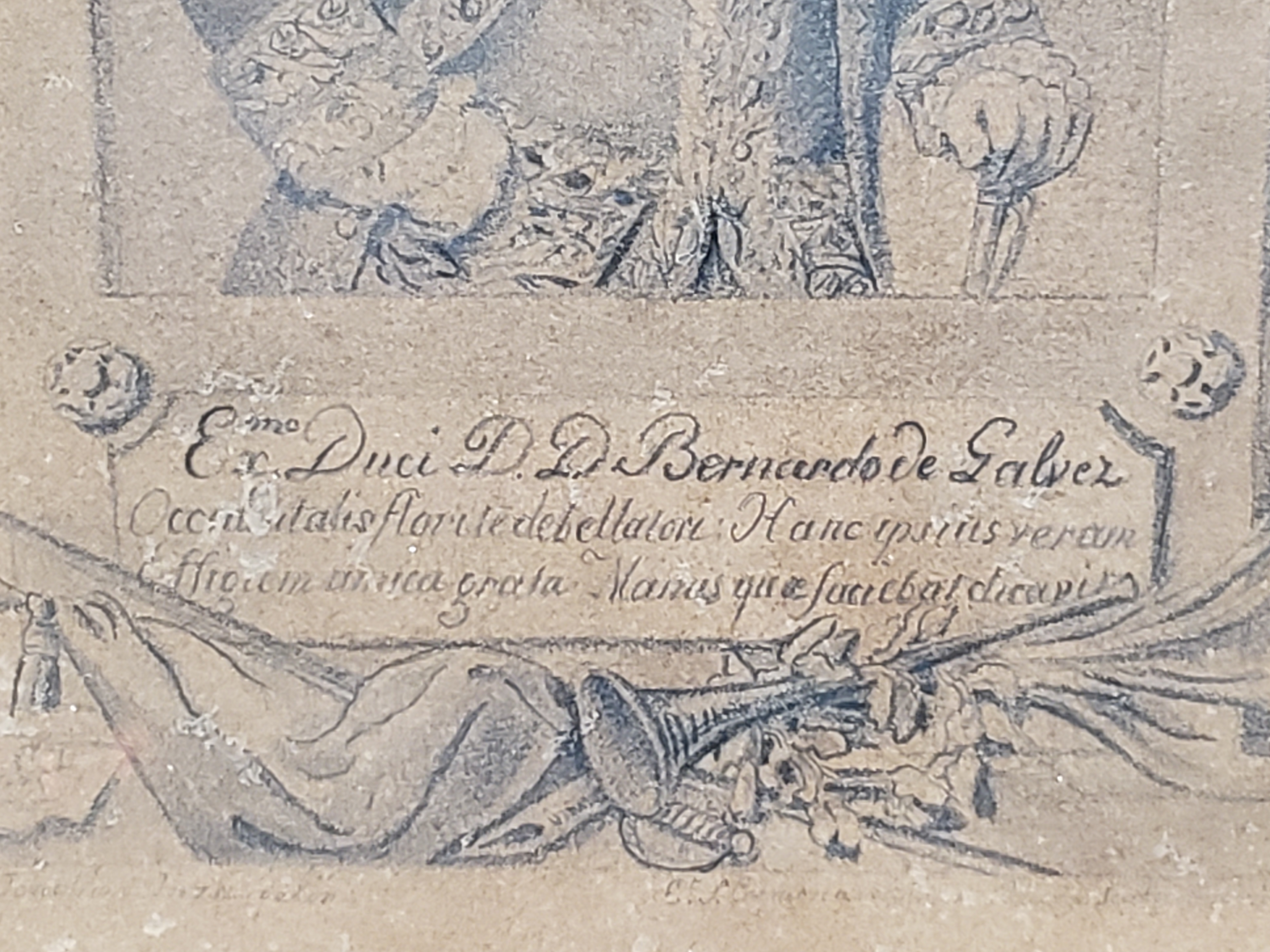 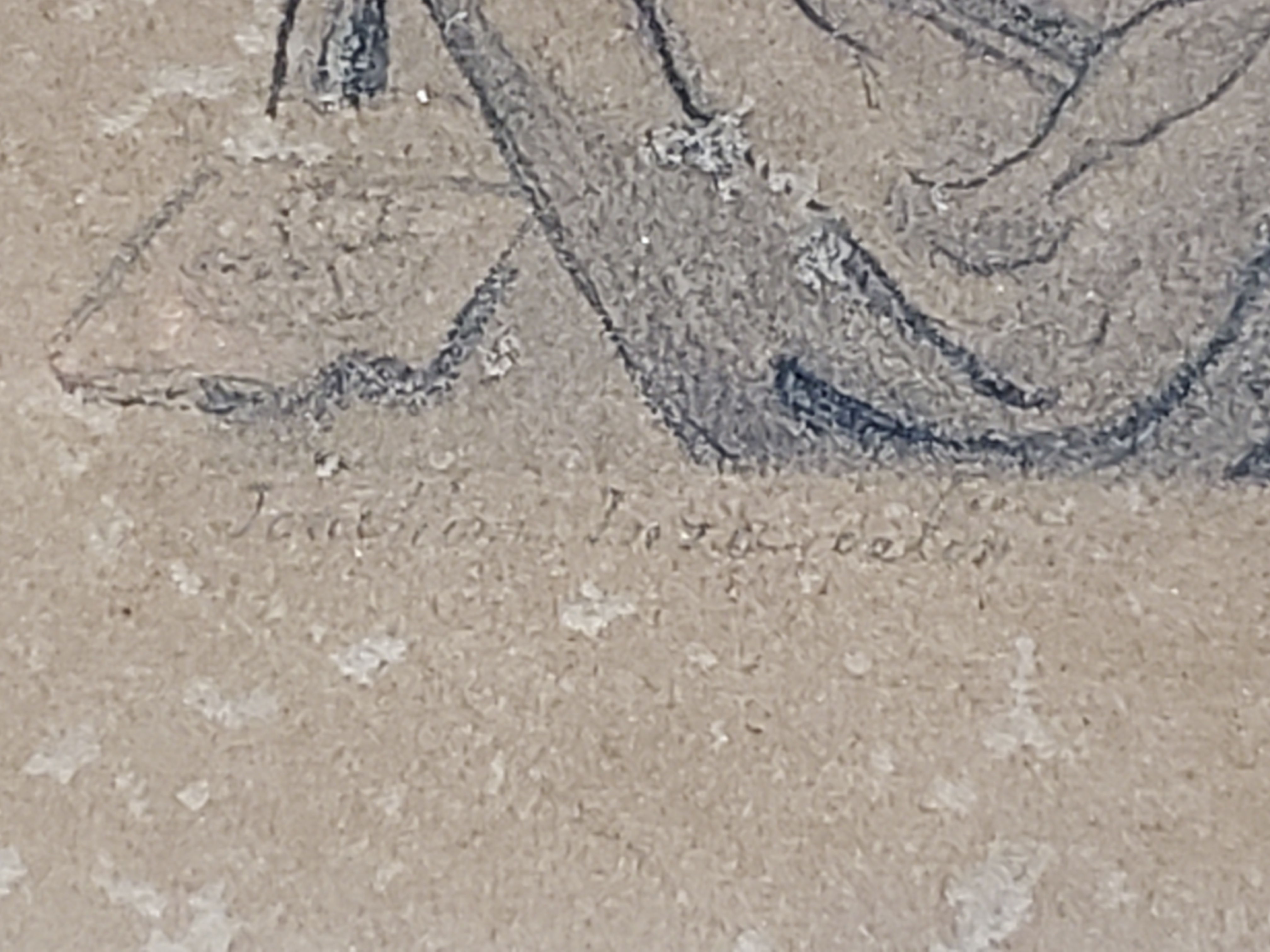 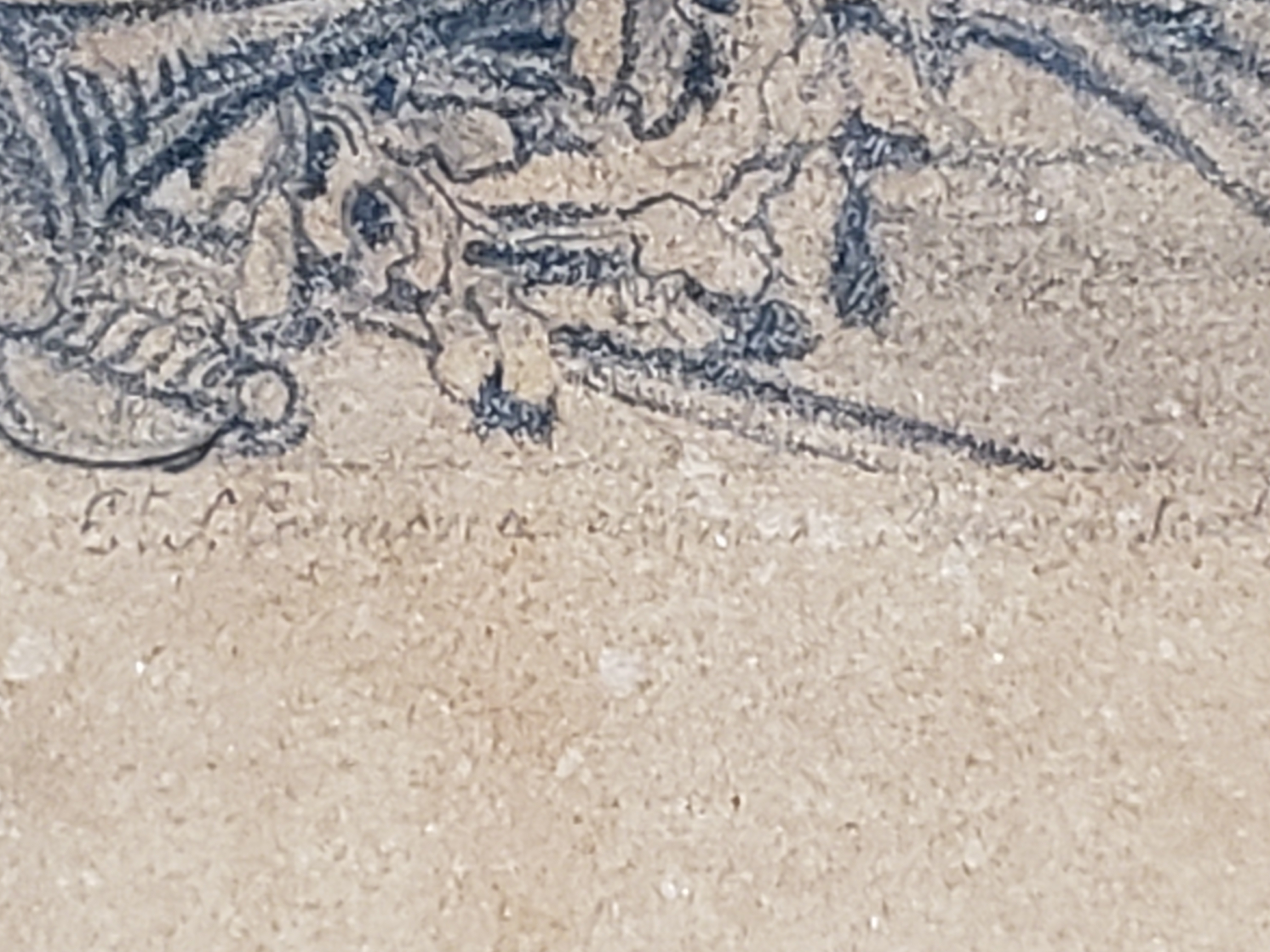 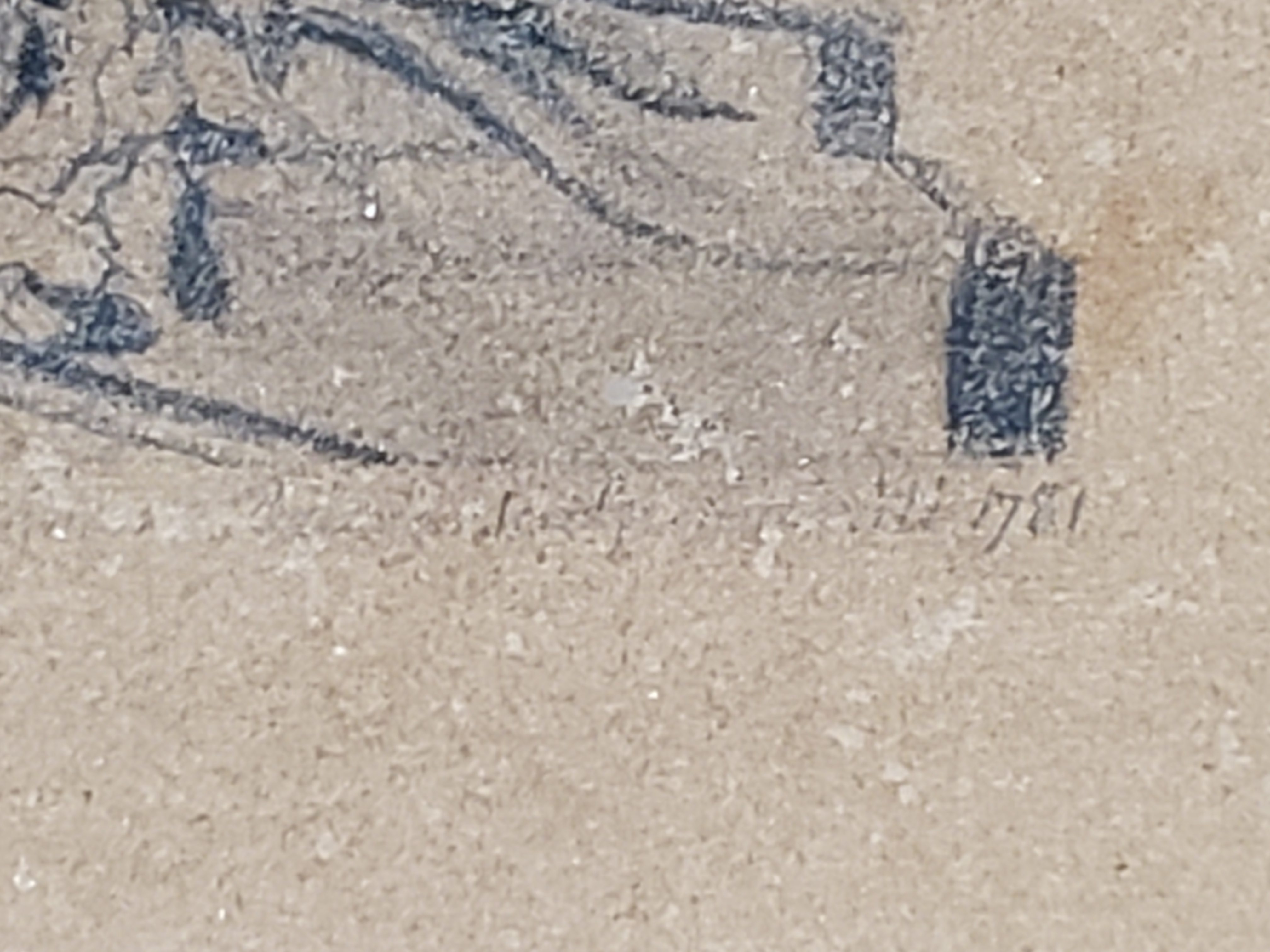 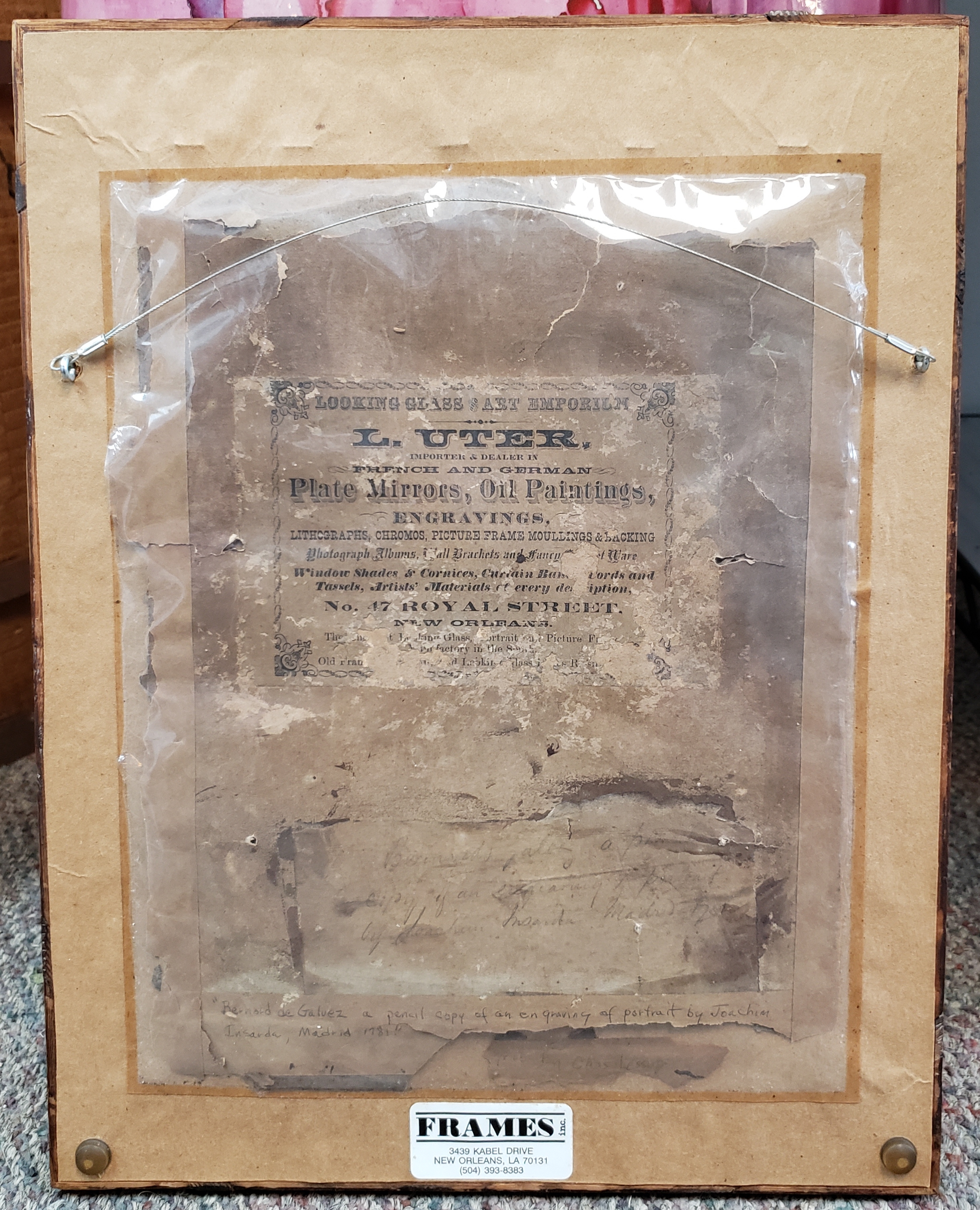 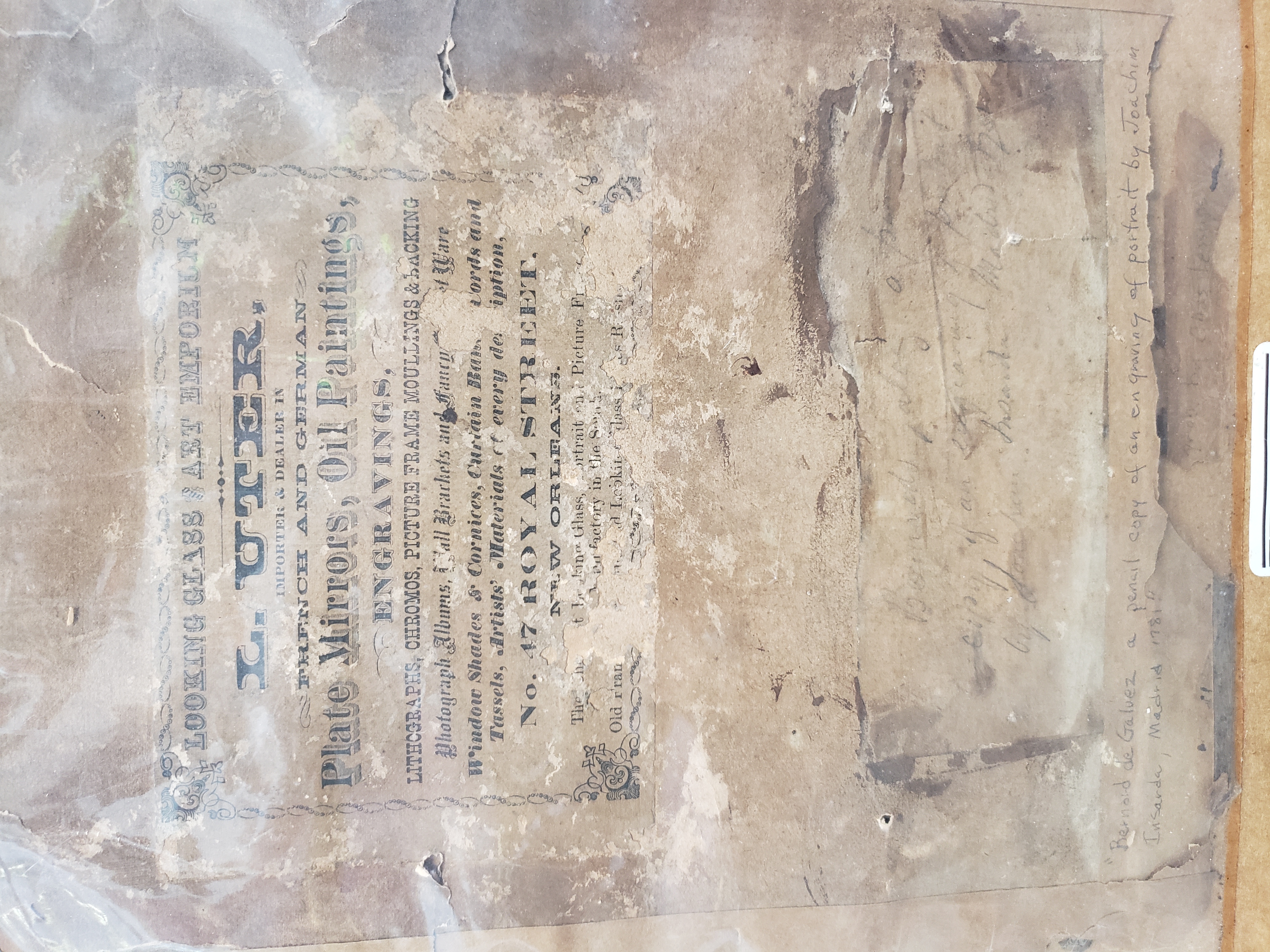 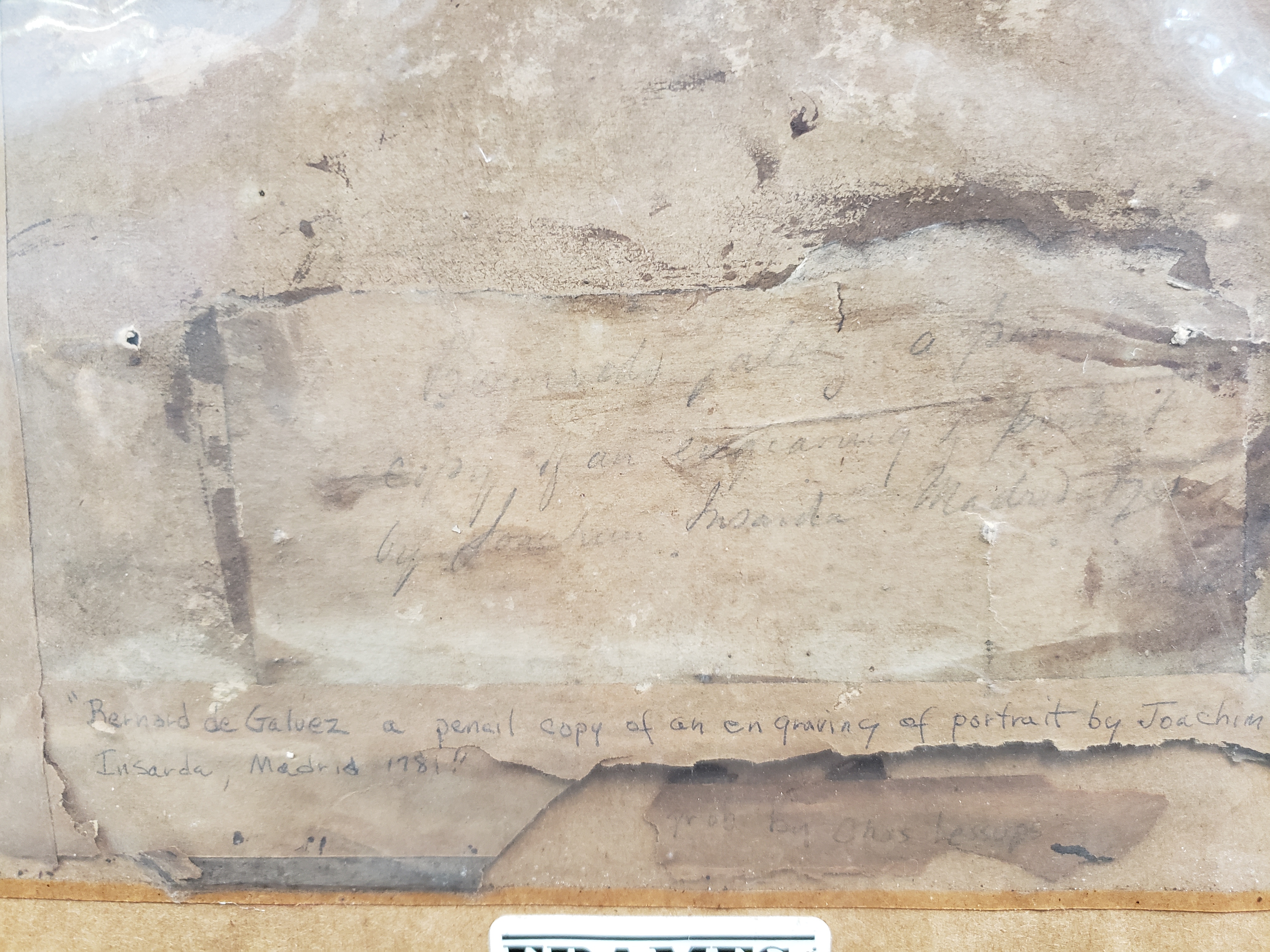 Answered in 2 hours by:
Antique Expert: Josie-ESA,  replied 2 years ago

Hi Denise,
Sorry I missed your earlier posting on this. Leave this with me and I'll see what I can find.

Hope you are doing well!

The short answer on this is that it appears to be an ink and wash, antique reproduction of a an 18th century print (the original was made in 1781) dating to the third quarter of the 1800s, assuming it's roughly contemporaneous with the splendid (and splendidly preserved) Laurent Uter label on the back.

A copy of the original of this print is part of the archive in the Prada Museum in Madrid and looks like this.

("Published by Carmona and engraved by Simon Brieva, of Madrid 1781")

The Latin inscription under the portrait reads:

Which I roughly translate as "Outstanding Leader D.D. Bernado de Galvez, paragon of valour in the Western World: I welcome you with this true likeness, by a friendly hand."

Intriguingly, the inscription of your copy corrected a couple of spelling mistakes in the Latin of the 1781 original, notably adding an extra f in Effigiem and another l in bellatoris.

Bernardo de Galvez (1746-1786) was quite an important military figure in 18th century Spain, especially in his capacity as Viceroy of New Spain, a territory that up until the Louisiana Purchase in 1805 covered all of Central America and Mexico, nearly all of the southwestern United States -including all or parts of today's California, Nevada, Utah, Colorado, Wyoming, Arizona, New Mexico, Texas and Florida. Spain also claimed areas as far north as British Columbia and Alaska.

He has a very specific and close association with Louisiana and particularly with New Orleans because on May 22, 1776, he was named colonel of the Louisiana Regiment, headquartered in New Orleans, and on July 19, appointed the interim governor of the province of Louisiana, which is all the purple bit in this map (excluding Florida which Spain ceded to England in 1763) but even so, the province went as far north as Canada!

Interestingly, he was extremely supportive of American Independence as he saw the fledgling Colonies as strong potential allies against English incursions into Spanish held territory in North America. For instance, the Spanish at that time controlled the Mississippi, and all its shipping, and were able to send arms, ammunition, medicine and other supplies to the Independence armies. He also offered asylum to fleeing American colonists who took refuge in New Orleans. The Spanish contribution to the US winning independence had just as much of a decisive effect as that of the French, who seem to get most of the credit.

All-in-all a very interesting piece, particularly for someone interested in the early history of New Orleans. However, being an original work of art, albeit a copy of a copy, it's really hard to put a value on it, but in the right venue, it would surely be worth at least $750 retail/insurance value.

What a great find and an interesting link to a lot of colonial history.

Verified
Robert S. and 87 other Antiques Specialists are ready to help you
Ask your own question now
Customer reply replied 2 years ago
Thank you very much for the thorough answer as usual! I appreciate it, Robert!

You are welcome! Glad to have helped as always!

Nora
Accredited Appraiser & Antique Expert
Post-Graduate from Christies London
32,539 satisfied customers
Show more
Disclaimer: Information in questions answers, and Show More
Disclaimer: Information in questions, answers, and other posts on this site ("Posts") comes from individual users, not JustAnswer; JustAnswer is not responsible for Posts. Posts are for general information, are not intended to substitute for informed professional advice (medical, legal, veterinary, financial, etc.), or to establish a professional-client relationship. The site and services are provided "as is" with no warranty or representations by JustAnswer regarding the qualifications of Experts. To see what credentials have been verified by a third-party service, please click on the "Verified" symbol in some Experts' profiles. JustAnswer is not intended or designed for EMERGENCY questions which should be directed immediately by telephone or in-person to qualified professionals.