S only. Happy New Year! I trust you had a good Christmas and…

For Robert S onlyGood morning...
For Robert S onlyGood morning Robert. Happy New Year! I trust you had a good Christmas and have taken some time off to recuperate.
I finally got the camphorwood chest uncovered. My mother had it made in Tsingtao China in 1947. I am assuming it was Tsingtao as that is where my dad was stationed. The only thing I remember her telling me was she picked the pattern out. There are two trays in the top (one pictured) . It is very good condition, none of the wood has cracked, just a few dings here and there. I have the lock for it but it's buried somewhere in the bottom of the chest. I will try to find it.
The chest is 42" wide, 21" deep and 21 3/4 high.
I found the brass plaque in a small box in the chest. Not knowing what it says I can't figure out what it goes to.
Thanks Robert.
J
Show More
Show Less
Ask Your Own Antiques Question 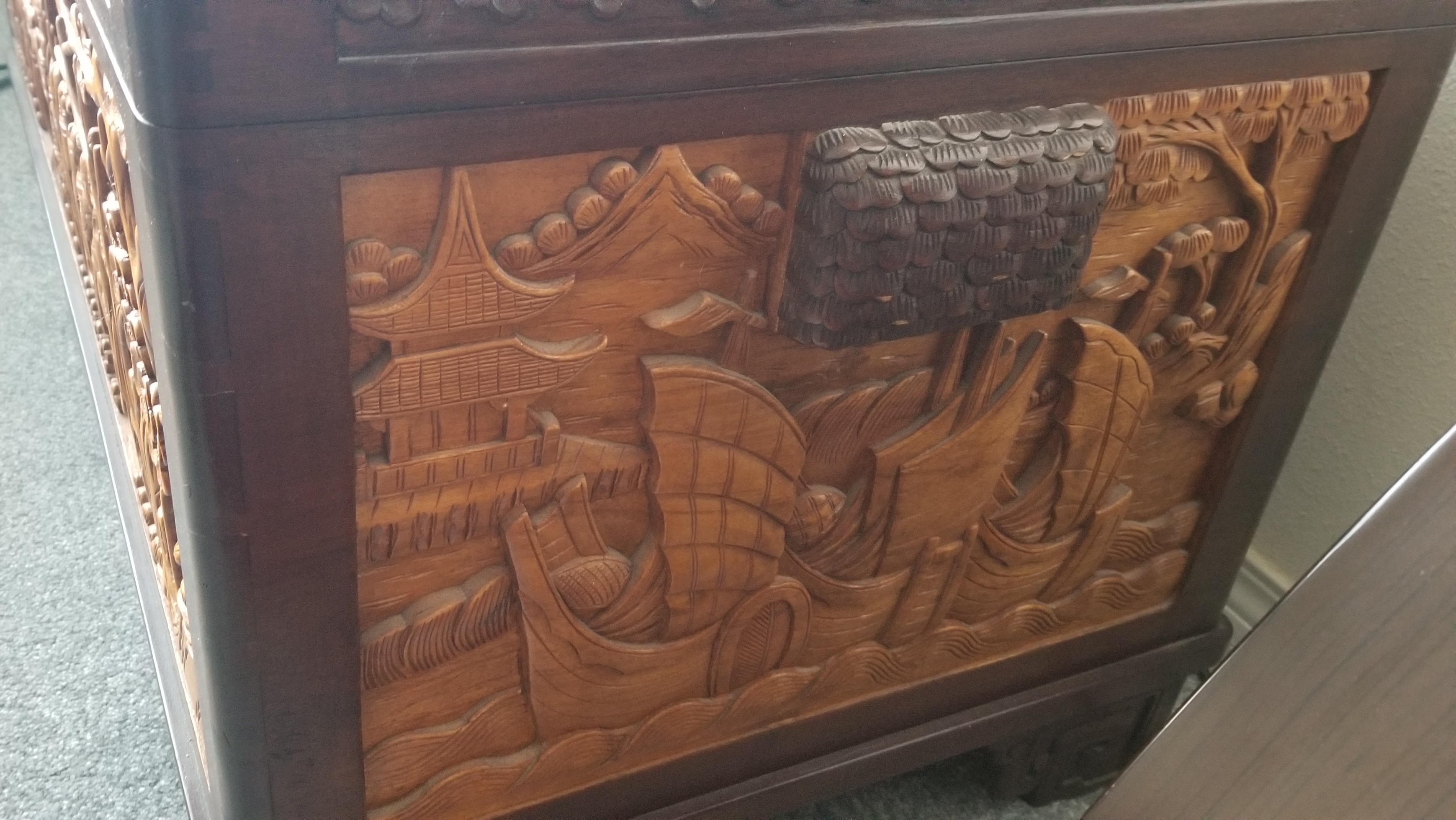 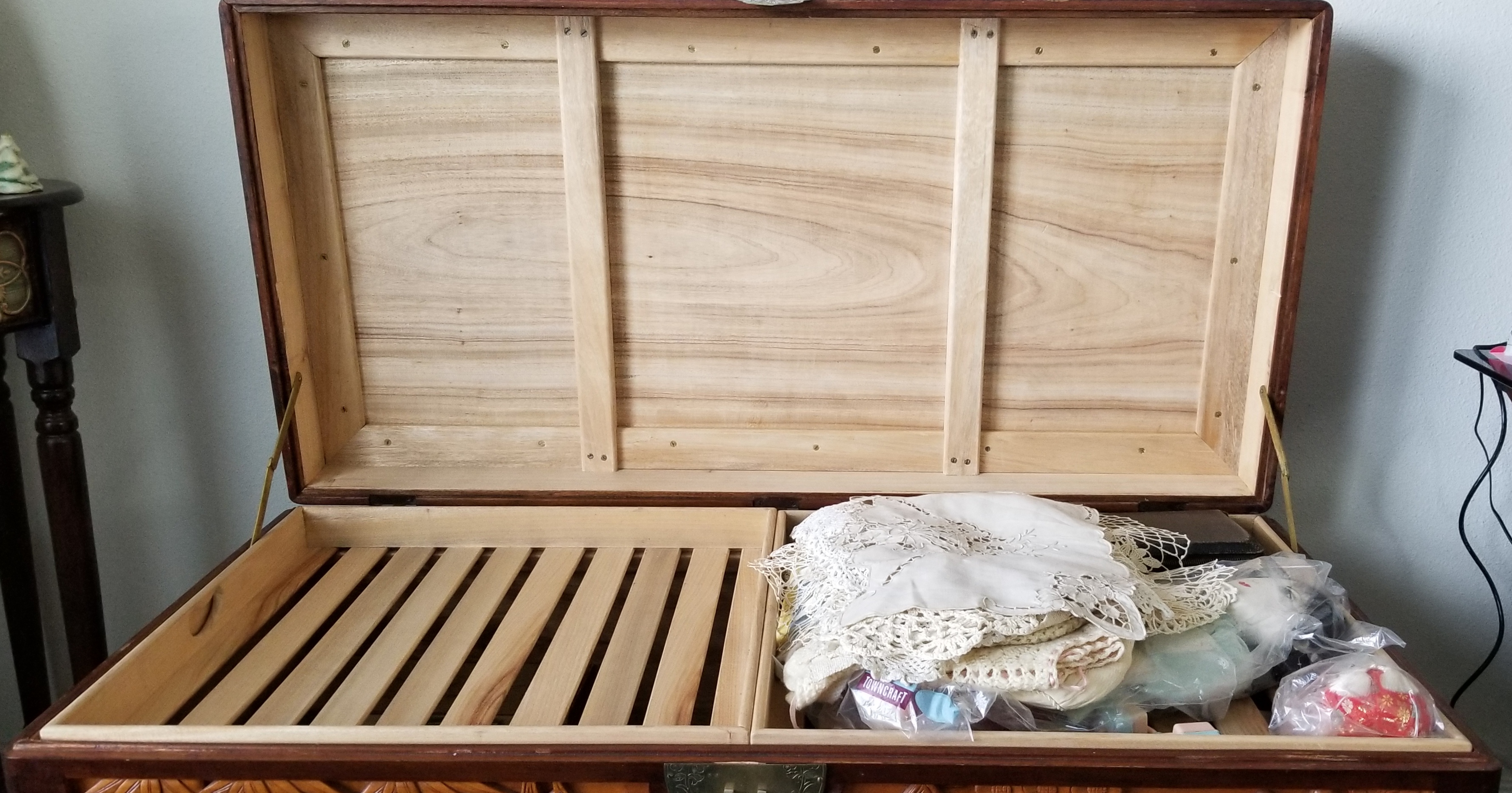 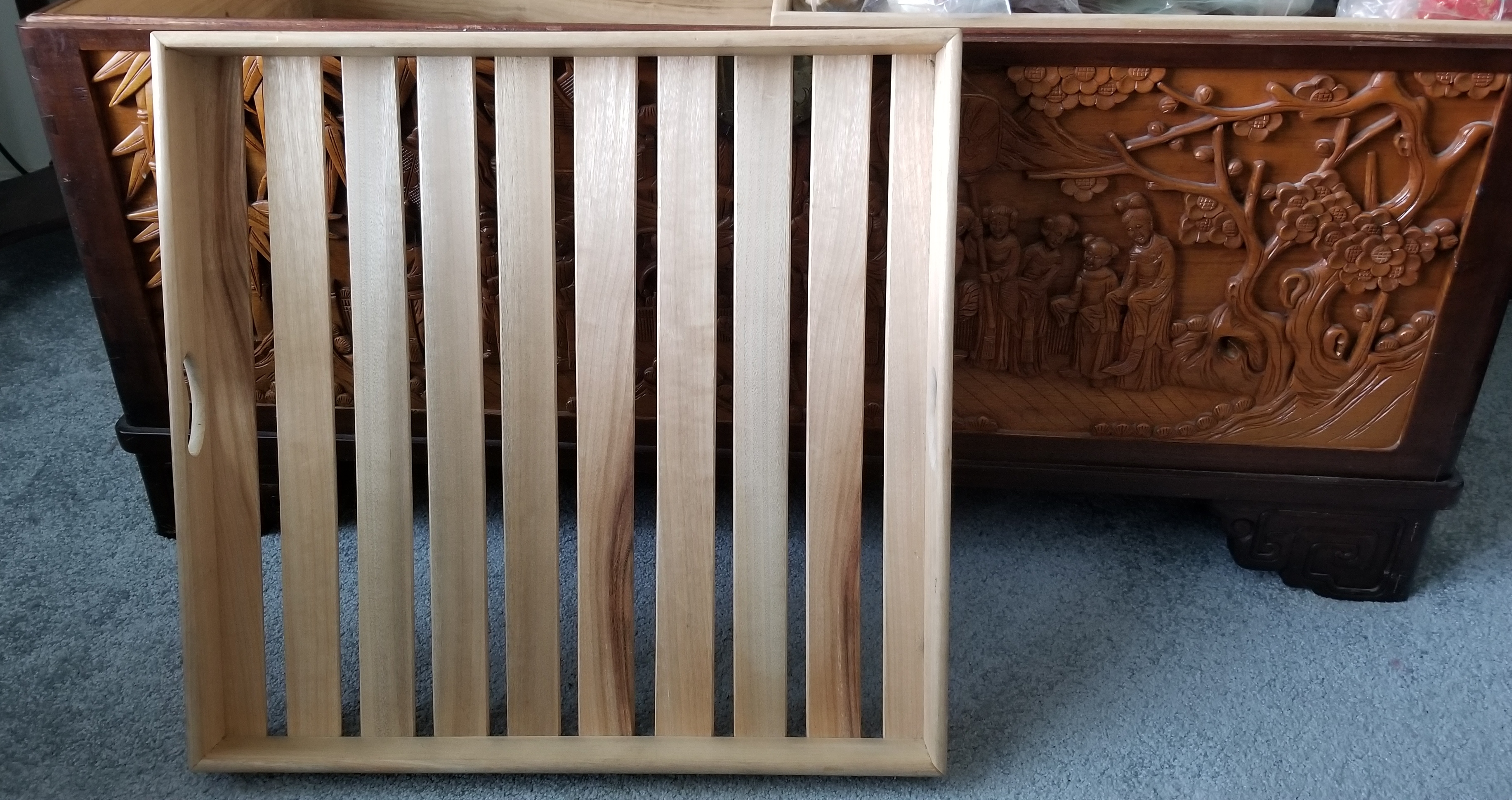 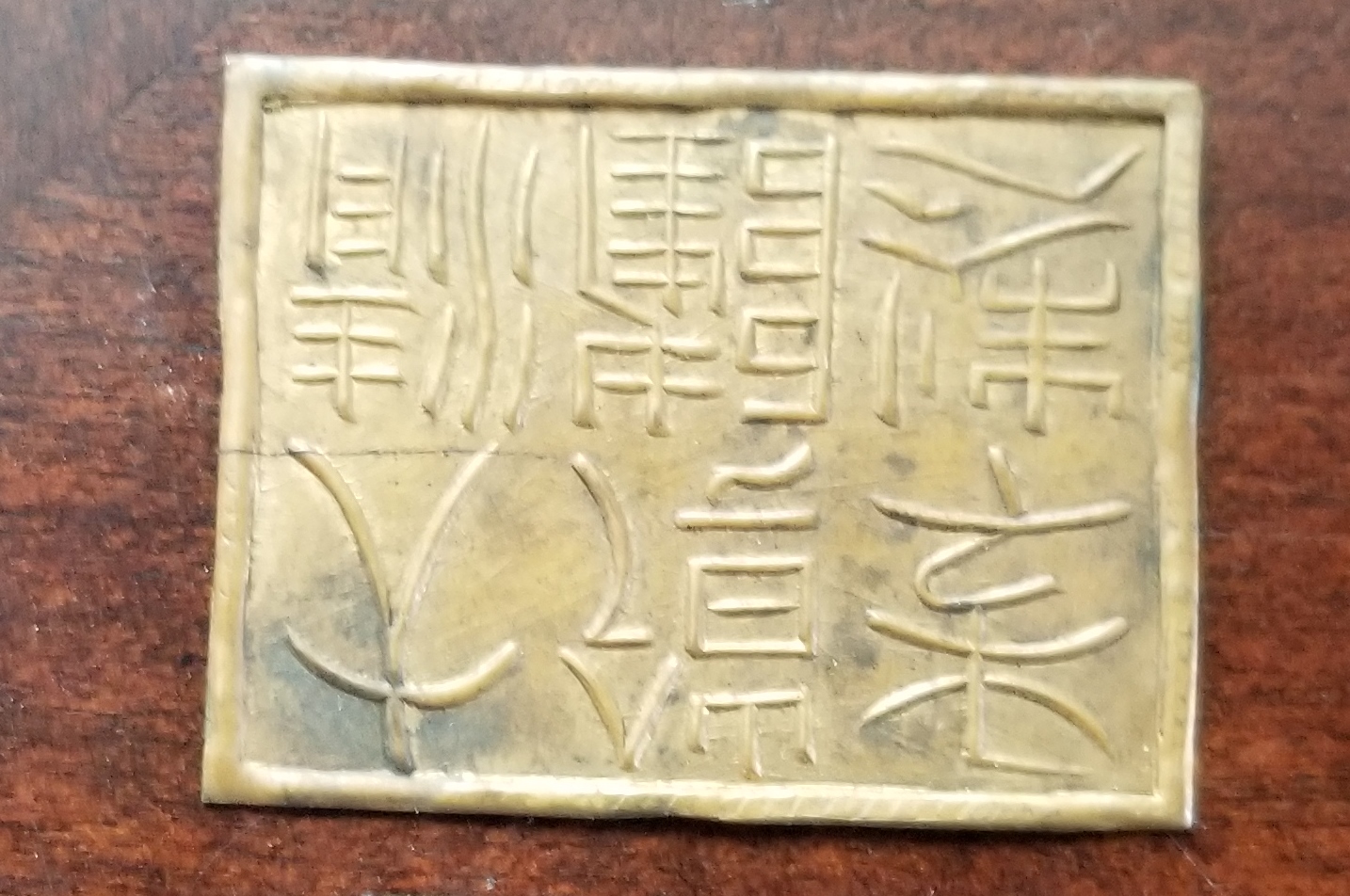 Answered in 1 hour by:
Antique Expert: Josie-ESA,  replied 2 years ago

Just letting you know I got the lovely camphorwood chest!

This is a beauty! And looks to be in superb condition, outside and in, complete with its immaculate slatted fitted shelves.

The top is a magnificent scenic of a Qing dynasty era, Mandarin 'royal' wedding procession, carved in high relief. No doubt some political marriage of the son of a senior official of the Imperial government to the daughter of another. IN the procession, the bride is being conveyed, hidden from view, in the ornate palanquin (like a small temple) carried by four men, followed by an entourage carrying wedding gifts. At the head of the procession, musicians lead the way to the exterior courtyard of a grand pavilion in south China (as evidenced by the tropical banana/plantain tree) where boys are playing with their amah (in the circular doorway). Receiving the procession is the groom and his father. (The groom is turning towards his father with an expression that seems to say, "Do I really have to go through with this?"). In the inner courtyard is the altar and attendants where the ceremony is about to take place.

Every face of the box is densely carved in panels of pale cedarwood (or possibly camphorwood, though this is usually reserved for the interior lining) and framed in a darker wood, an ebonized hardwood of some sort, decorated with a border of highly symbolic plum blossoms carved in relief. The word for "plum" 梅 in Chinese is a pun on the word "eyebrow" 眉 and used in the auspicious expression, "Happiness to the eyebrows" (喜上眉梢) as in happy eyes twinkling with pleasure, or radiant with joy, to the very tips of the eyebrows.

As for value, these carved camphorwood chests are becoming popular again after languishing terribly in value a generation or two ago. Possibly as a result of the Chinese now being so wealthy and wanting to repatriate all these treasures made for export to the West. Having said that, they are still way below the value they should be considering the weeks of carving that goes into the making of them. A chest of this age, detail and artistic merit currently would sell at auction in the range of $350 - $450.

It therefore has a full retail value of at least $1000 and is what you should insure it for.

I hope this helps!

PS. The brass plaque with the inscription is a zhuanshu 'seal script' Imperial seal that reads:

It's hard to know what this goes with. These Qianlong seals were (and still are) hugely popular and used for decorative purposes on all sorts of objects as a tribute to the great artists and craftsmen of old. The Qianlong period was 1736 -1795, but this brass plaque is probably second quarter 20th century at the oldest.

Verified
Robert S. and 87 other Antiques Specialists are ready to help you
Ask your own question now
Customer reply replied 2 years ago
Wow, I had no idea what all those carvings meant. There was no way the camera could capture its true beauty. Very happy with what you found out. Thanks Robert.
There are only 2 more pieces of furniture which I will get to in a week or so. Also will be sending you photos of the contents of the chest. Hope you have brushed up on your Chinese. lol
Was this answer helpful?
Yes
No