SECOND OPINION DO NOT CLOSE** - I have 2 Asian screens. The…

THIS IS A SECOND OPINION...
THIS IS A SECOND OPINION DO NOT CLOSE**For Nora only- Hi. I have 2 Asian screens. The first one I bought a few years ago and love it. It is hanging in a bedroom and is gold with a tree and birds. The back is paper. I would like to know more about it... if the person who painted it is an artist or if it was done by an individual forthemselves and the time period.
Then just a few weeks ago i was excited because I found another one... it is black and white... a very simple painting. However when I got home, I realized that there was a beautiful other side to it... so it is double sided in a sense. The other side is a similar painting as my first one.... gold with tree and birds but the color has some spots of turquoise or green in it.... what is the time period? Are there 2 different artists for the double sided screen? ? Is the artist known? And of course... estimated value...
Show More
Show Less
Ask Your Own Antiques Question
Share this conversation
Customer reply replied 2 years ago
Here are the files. 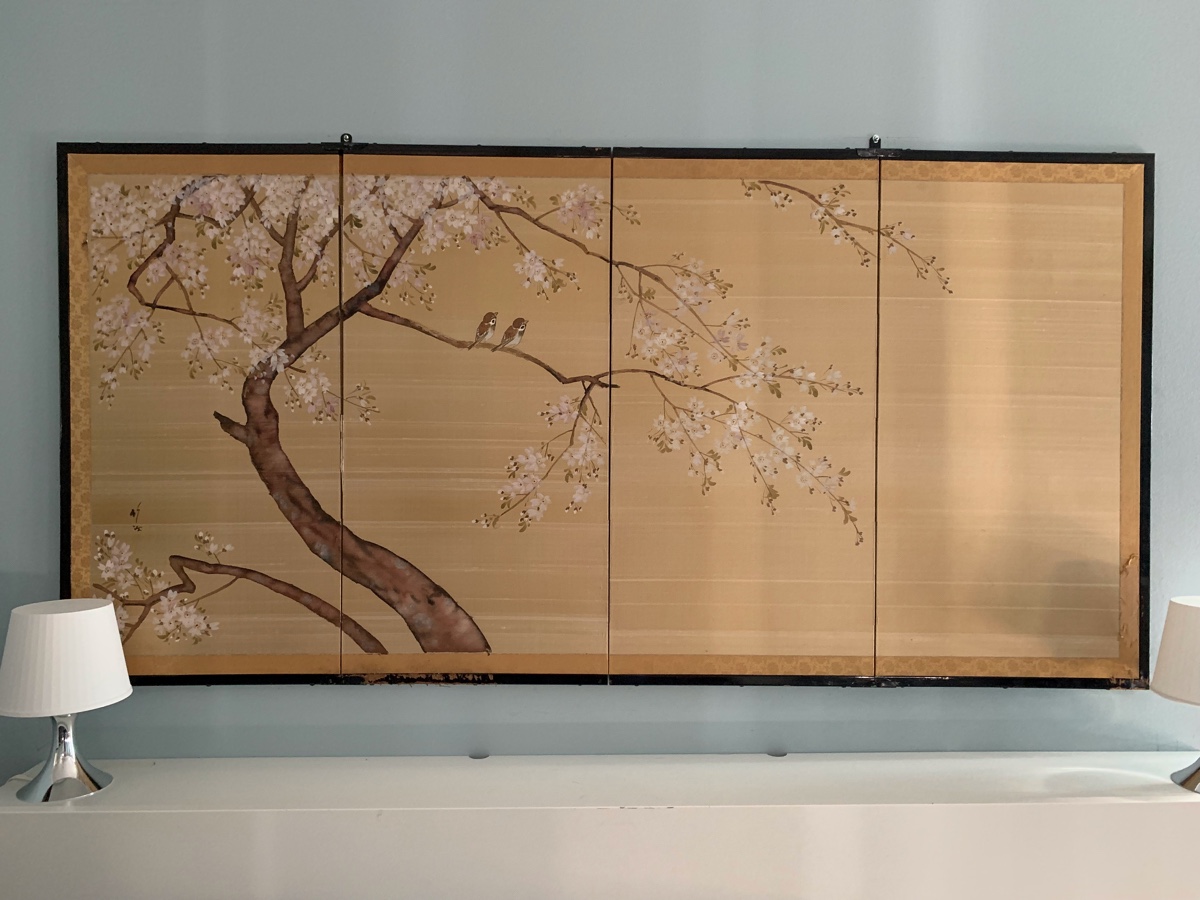 Answered in 3 days by:
Antique Expert: Josie-ESA,  replied 2 years ago

Hello, and thank you for your question. I am reviewing it now and will reply again in a moment. ~Nora

I will opt-out and open your question again to all the experts at no additional charge. If someone knows the answer they will post a response to you here. You do not need to re-list your question and this does not cost you extra. There is not a guarantee that you will receive a response.

I will not be able to respond back after opting-out

I do hope you find the information that you seek.

Both of these are Japanese (not Chinese, although they look as if they might be, because way back in the 1400s the Japanese copied the artwork and form from the Chinese) and yours are typical of the time period they were painted: the 1950s or 1960s.

The Japanese call these byobu, literally "wind wall" for blocking drafts or dividing a space for extra privacy.

(1) Your original one-sided screen is a traditional four-panel, low form of byobu, used for tea ceremonies as, when everyone is sitting, it provides a complete screen. The decoration is all hand painted on silk. The subject, a pair of small songbirds sitting in the branches of a yoshino cherry tree is a traditional composition of an art form that became popular among literati scholar/artists in China from the 13th century onward called "bird-and-flower painting" 花鳥畫

Unfortunately the signature in black is written in a style of deliberately scribbled calligraphy known as sosho which is notoriously hard to read (even Japanese scholars struggle with it). It was done to look spontaneous and artistic rather than to be legible.

Also, the artist's red rakkan seal below is too indistinct and faded to read either.

But then knowing the artists of these third quarter 20th century screens is only a curiosity, really, as identifying them does not make the screen any more or less valuable. There are very few collected 'names'. They were almost all done by unknown artists employed by the "stable-full" by manufacturers of Japanese export furnishing art, in order to turn these out in huge numbers at a time when every home in the land had a Japanese screen, an almost obligatory item of decor in post-World War II period.

As a result, there are a great number of them still around and for sale on the secondary market (auctions and on line venues) so prices are not nearly as much as one would expect for all that hand painted artistry. If you saw this one for sale in an antique store it would be priced at around $350. This is also the replacement value for insurance purposes.

(2) The second one is more interesting because it's two sided. I can also tell you who the artists are: this side is signed:

The subject, another "bird-and-flower" composition, a solitary bird in the branches of a type of plum called a mume cherry, very significant to the Japanese as this flowering tree is a popular and powerful symbol of winter, but it also represents resilience, hope and promise as it flowers at the end of winter (the first tree blossom of spring) around the time of the Japanese New Year.

The reverse, the landscape painted in black ink-and-wash is signed:

Again, this is another unknown, unlisted artist.

So, going by artistic merit, age, size, condition and so on, this two-sided screen would have a retail value of $650. This is also the replacement value for insurance purposes.

As always, expect get 30% - 40% of these retail values if you were to sell at a good local antique auction.

I hope this is helpful information!

PS. If you need me for any other Asian related item, or indeed almost anything antique, please don't hesitate to request me by name. Simply put "For Robert S. only...." in the subject line when you start a new question. Many thanks. R.

Verified
Robert S. and 87 other Antiques Specialists are ready to help you
Ask your own question now
Customer reply replied 2 years ago
Hi. Thanks so much for the extra info.

You're welcome! Glad to help.

Judith-on-Antiques
Antiques and Collectibles Researcher
Bachelor's Degree/Graduate Chef's Diploma
6,624 satisfied customers
Show more
Disclaimer: Information in questions answers, and Show More
Disclaimer: Information in questions, answers, and other posts on this site ("Posts") comes from individual users, not JustAnswer; JustAnswer is not responsible for Posts. Posts are for general information, are not intended to substitute for informed professional advice (medical, legal, veterinary, financial, etc.), or to establish a professional-client relationship. The site and services are provided "as is" with no warranty or representations by JustAnswer regarding the qualifications of Experts. To see what credentials have been verified by a third-party service, please click on the "Verified" symbol in some Experts' profiles. JustAnswer is not intended or designed for EMERGENCY questions which should be directed immediately by telephone or in-person to qualified professionals.