A German beer stein. The last one went back to the rowing…

Hi Robert A German beer stein...
Hi Robert
A German beer stein. The last one went back to the rowing club, thankyou. This one looks interesting. First the lid has two soldiers and a field gun. The thumbpiece is a crowned eagle.
The Images seem hand painted, the buttons are definitely hand gilded and very neatly. Have no idea what the writing says.
No marks to the base
Overall it is 9.5 inches tall including lid
Lots of photos
Your opinion as always please
kind regards
Chris
Show More
Show Less
Ask Your Own Antiques Question 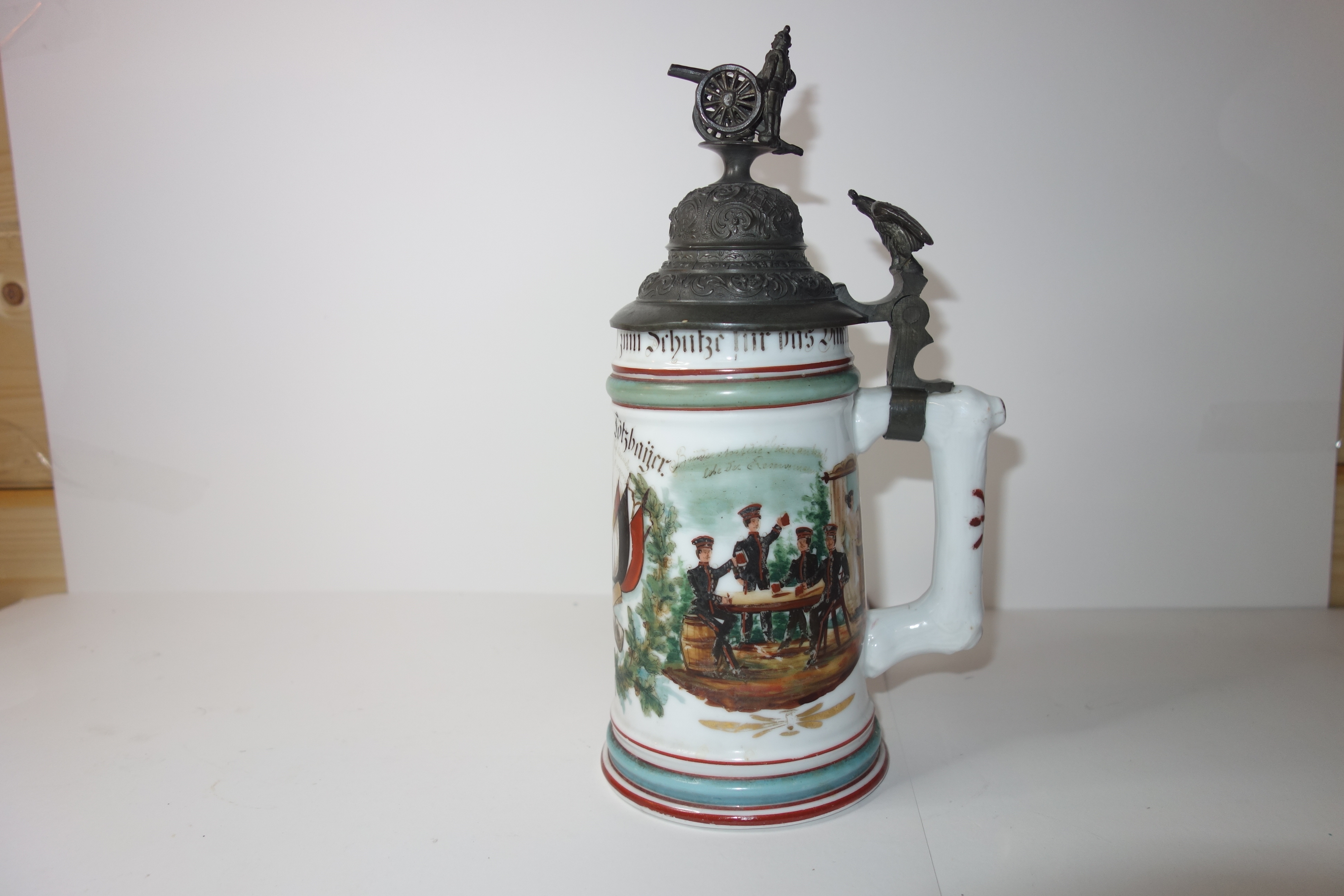 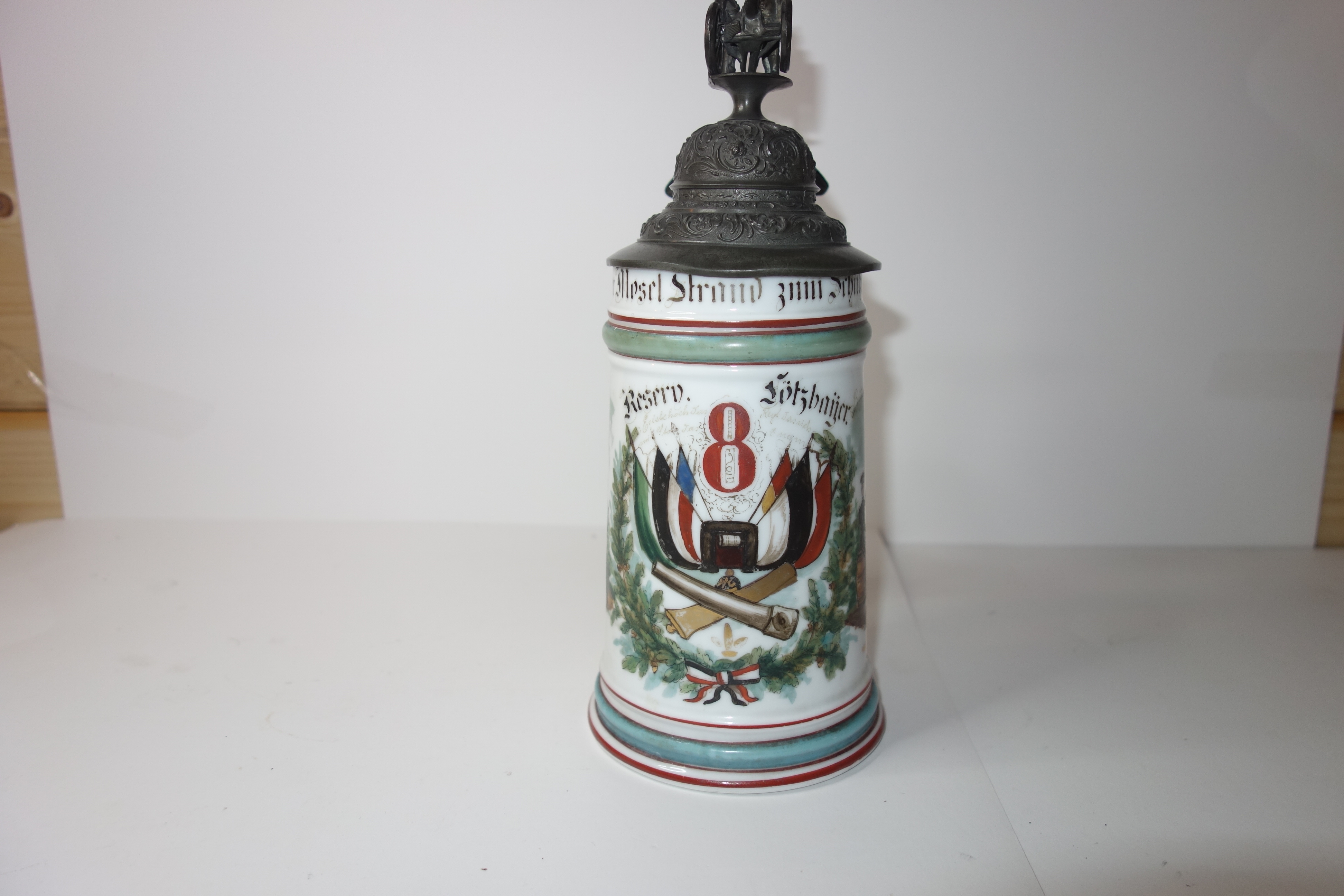 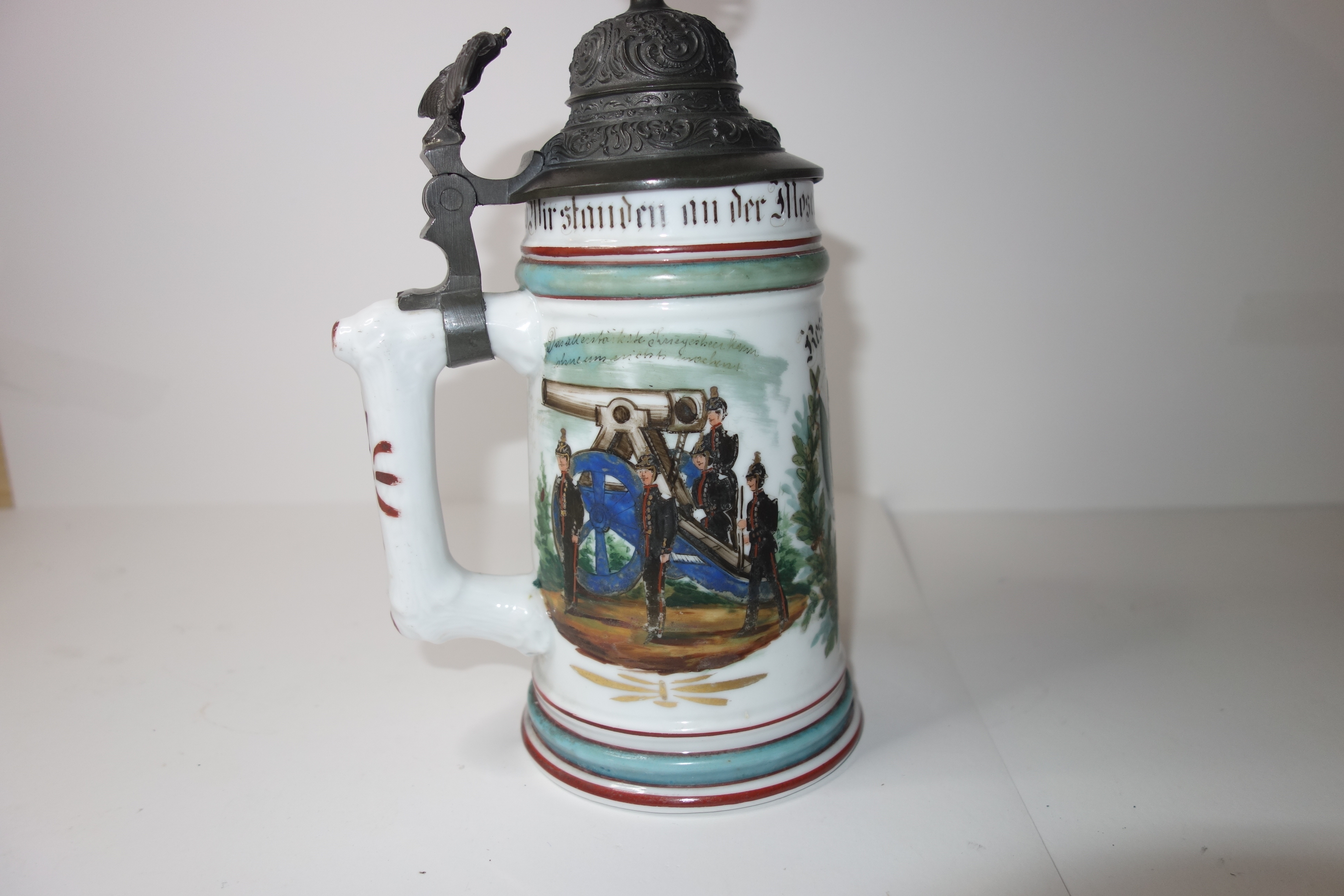 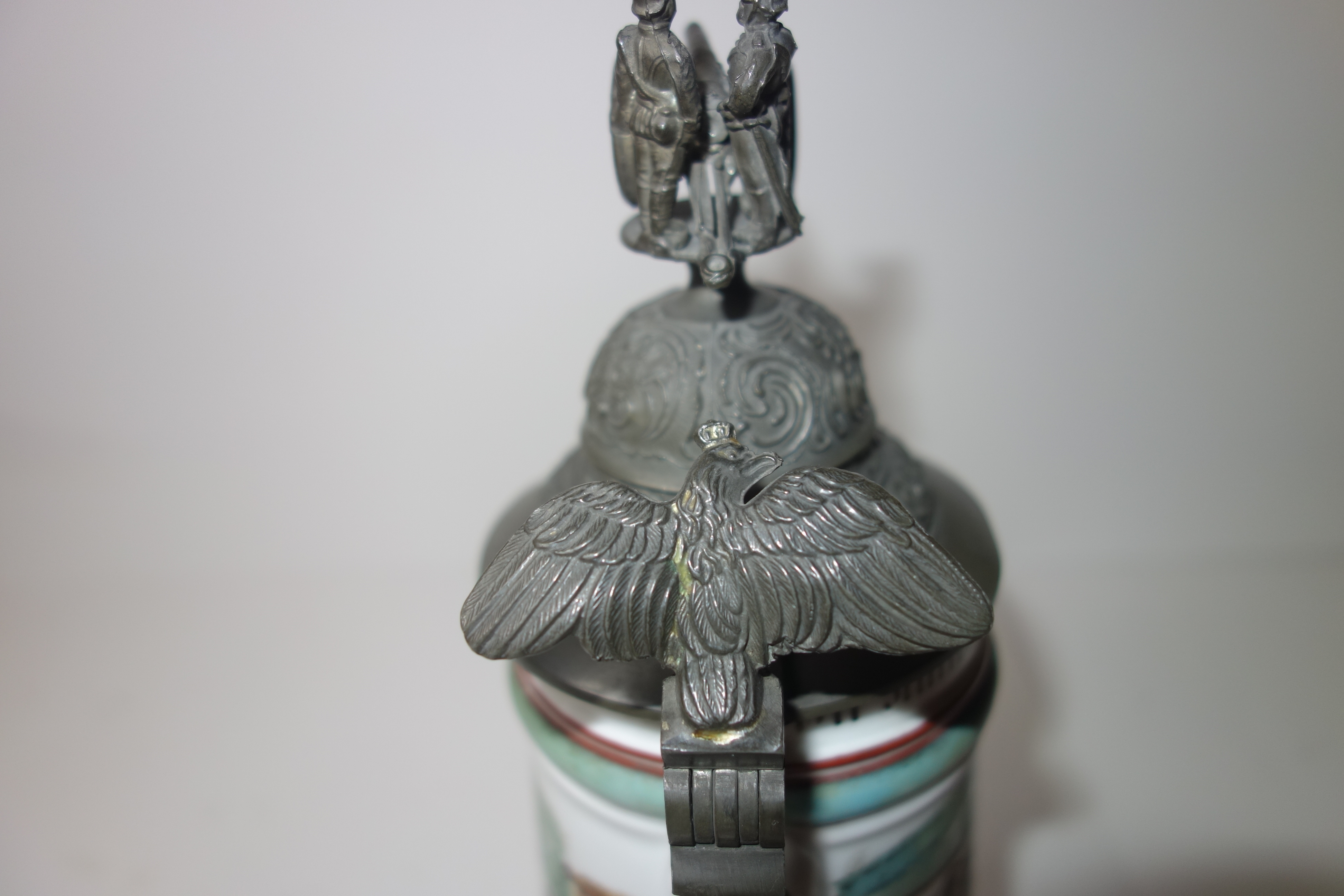 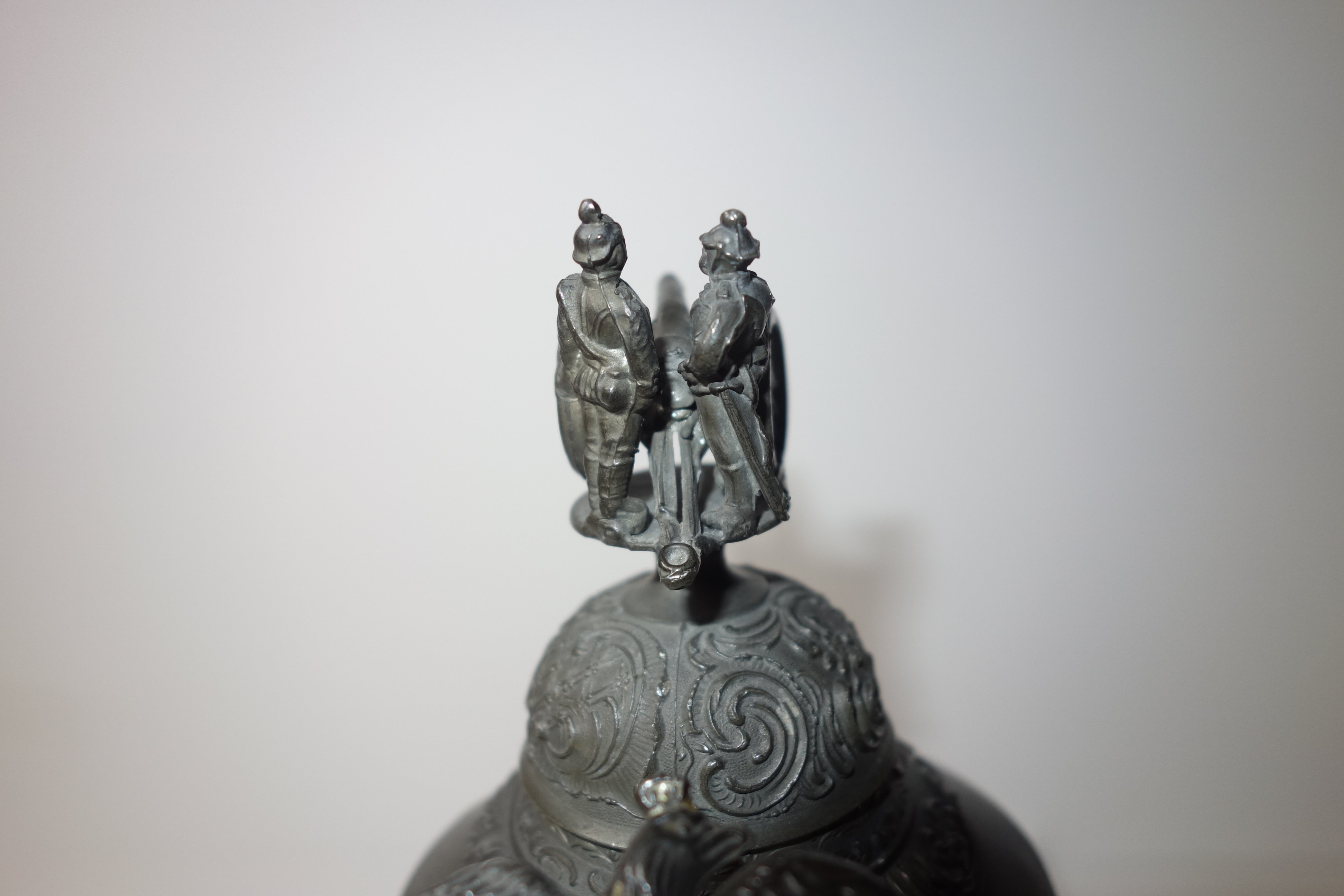 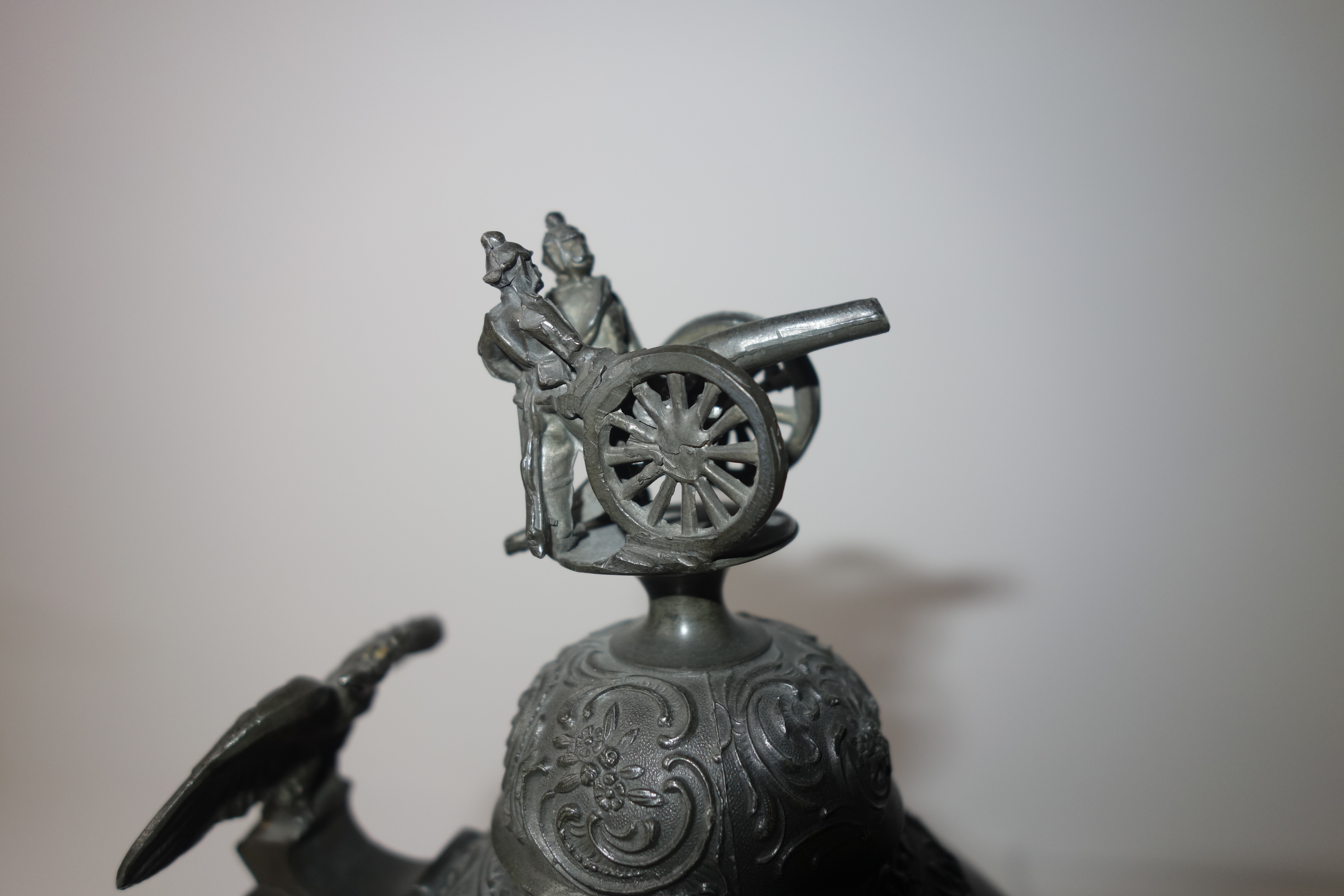 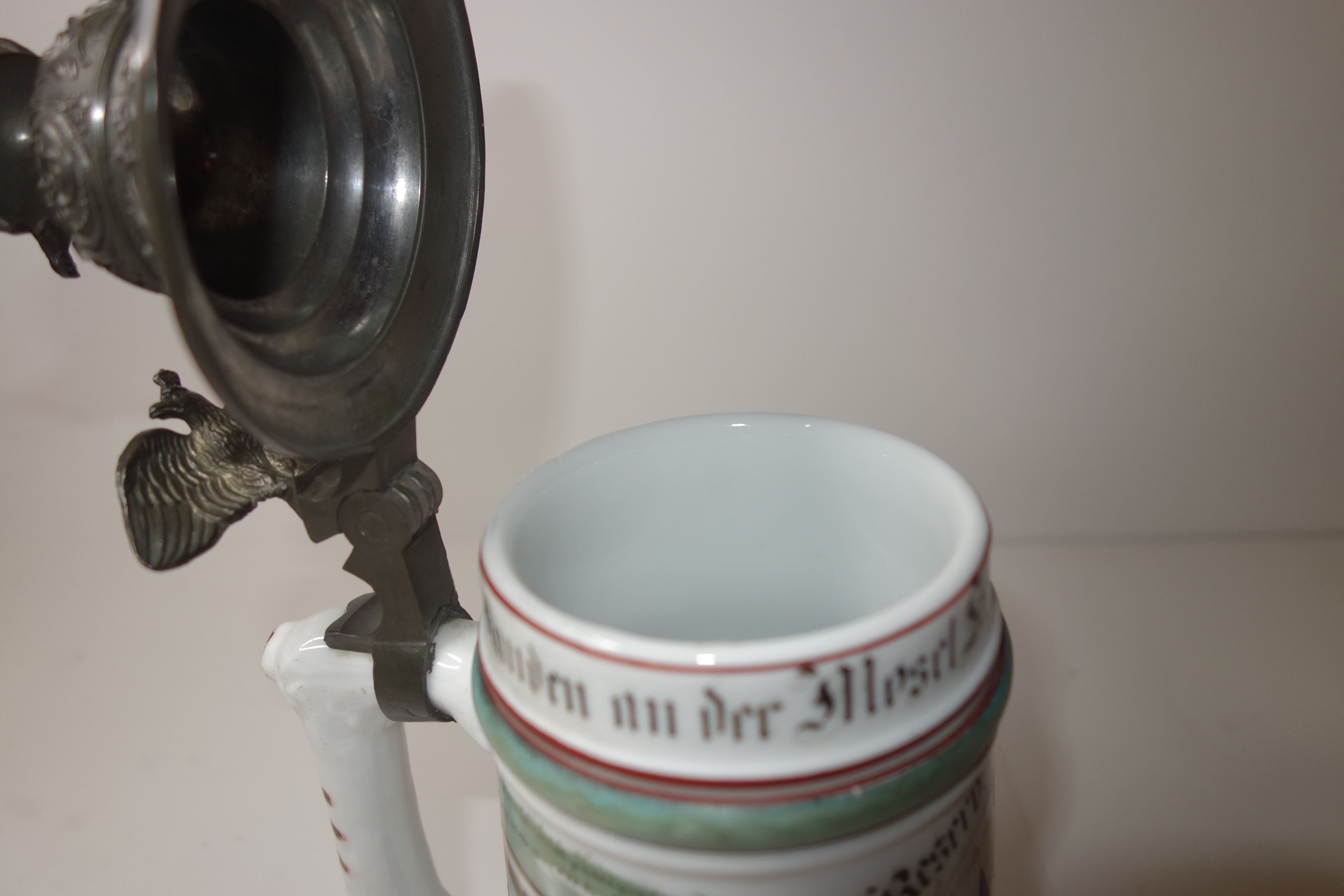 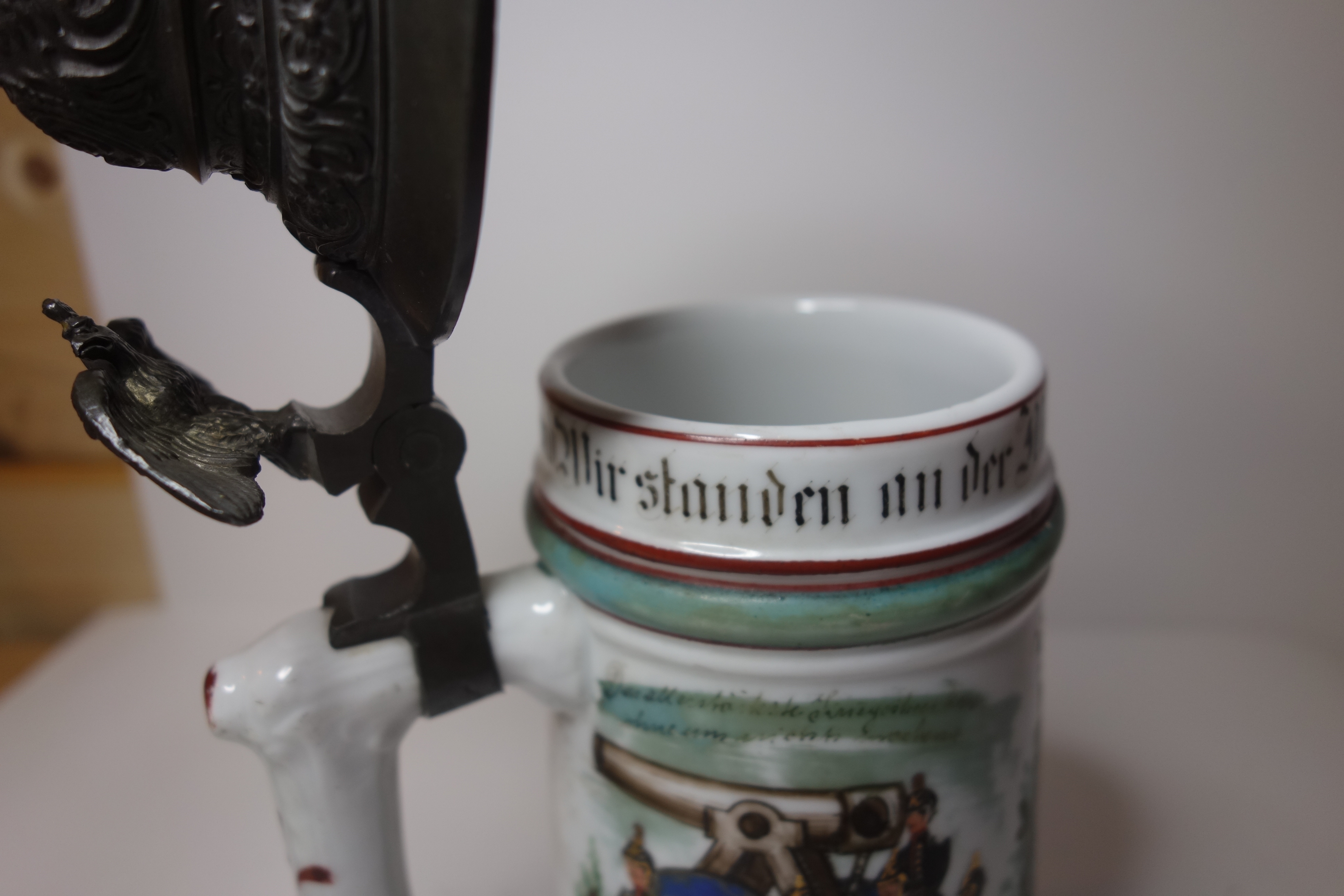 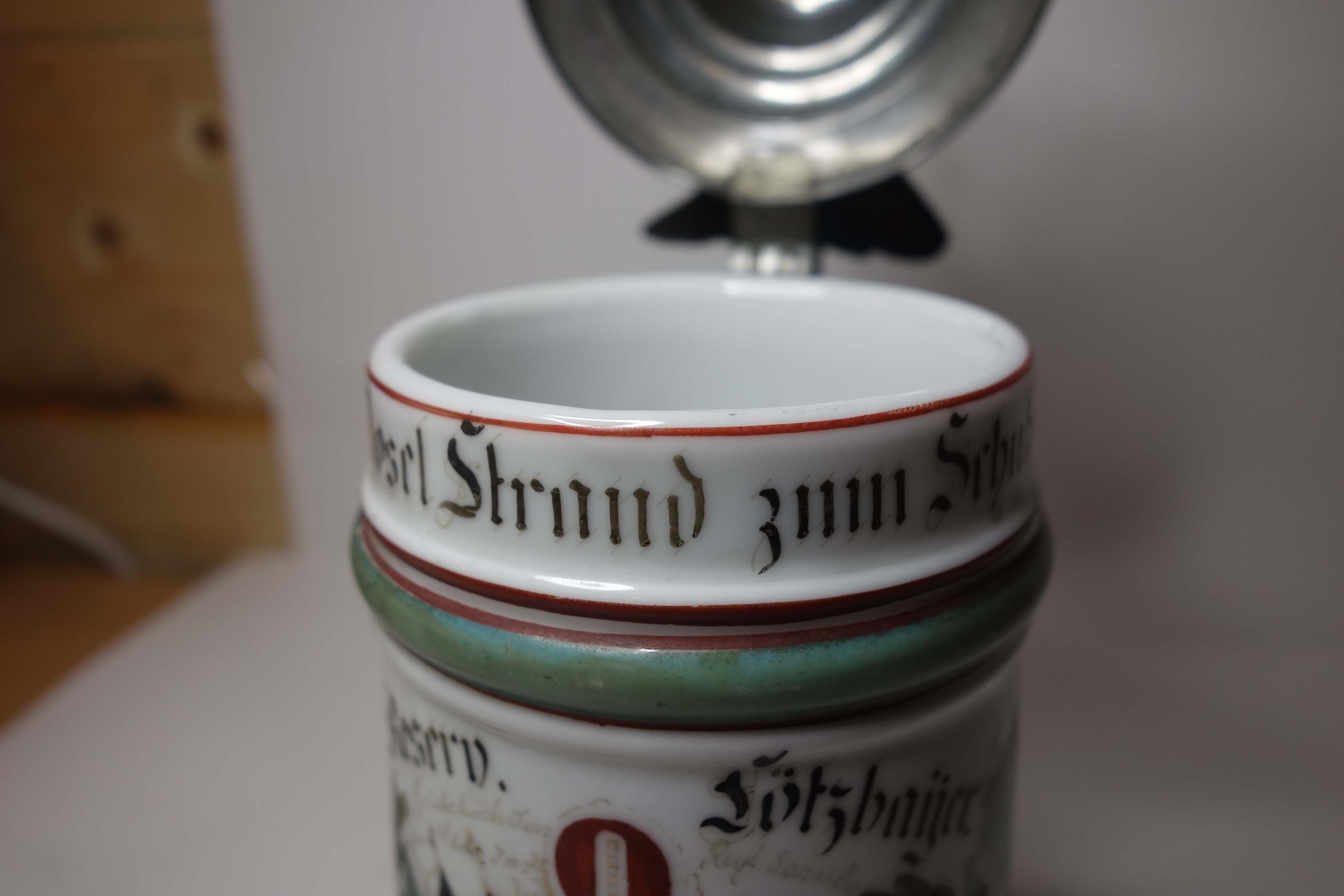 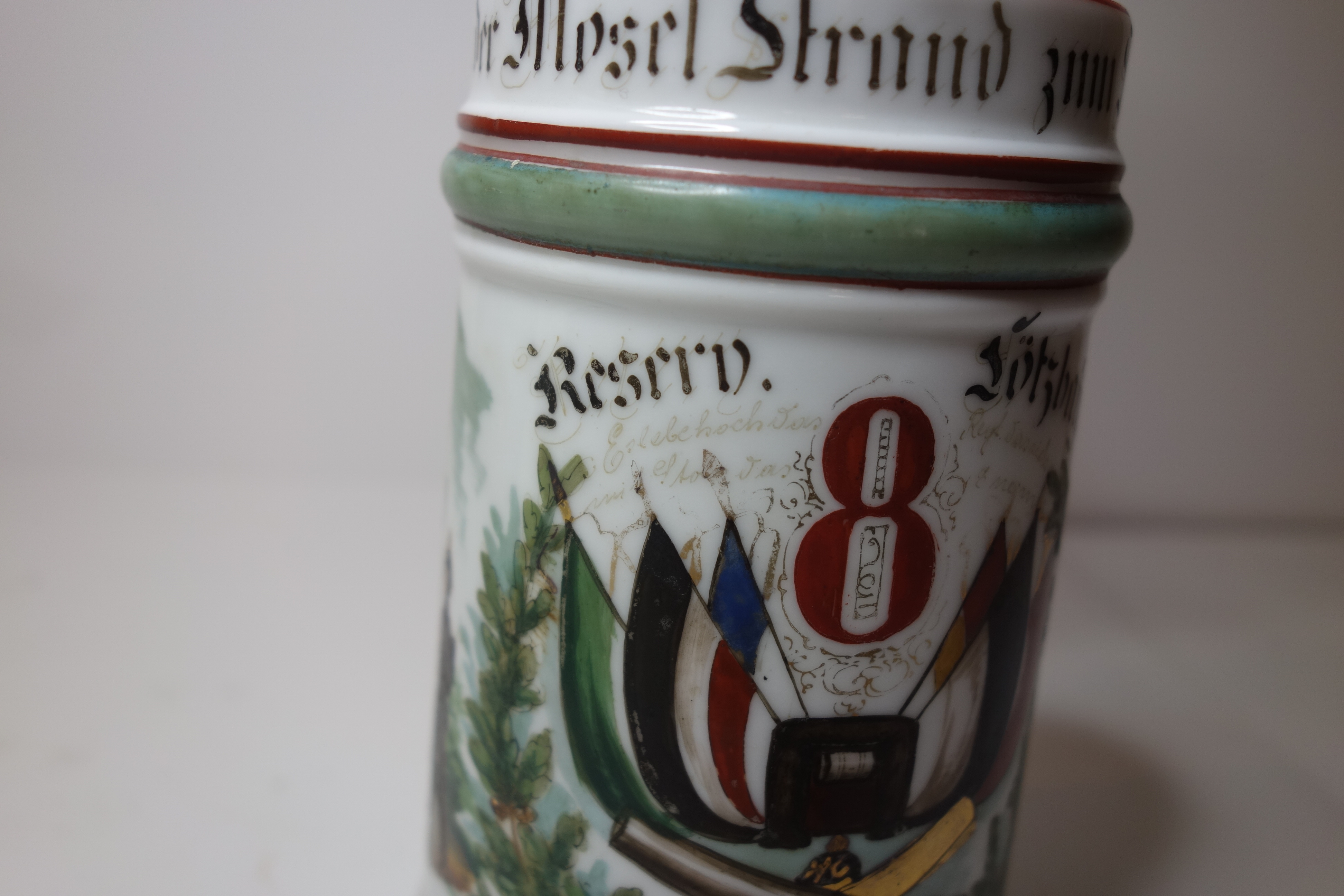 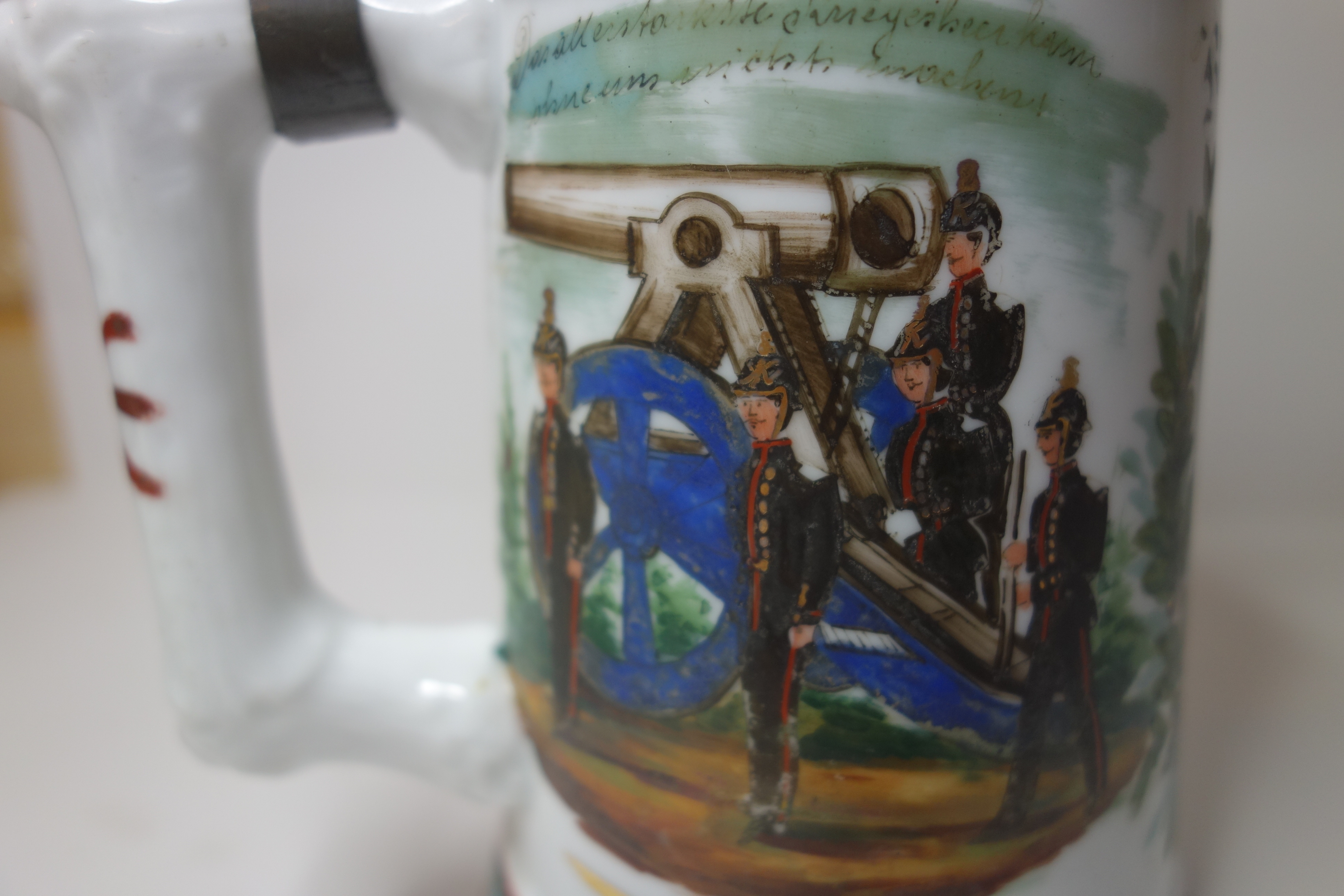 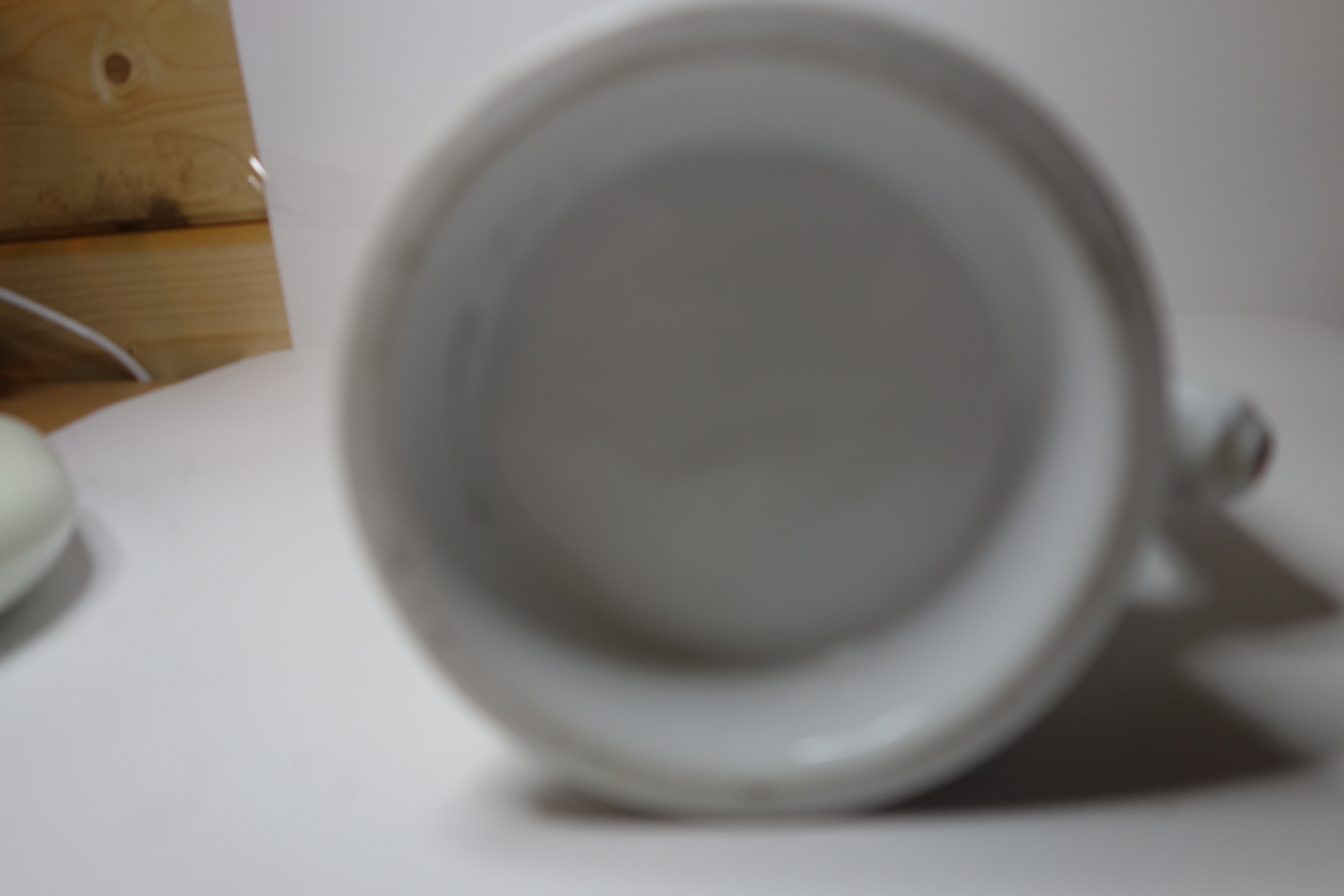 Got the beer stein! Another interesting one! More war booty no doubt. Many of these regimental steins came to the West when the Allied Occupation forces took over German barracks during the aftermath of WWII.

I'll have an answer for you soon.

Does the bottom have a lithophane image when you hold it up to the light?

Customer reply replied 2 years ago
By George it does, quite detailed too, looks like 2 men working at a bench. I have tried to photograph it for you 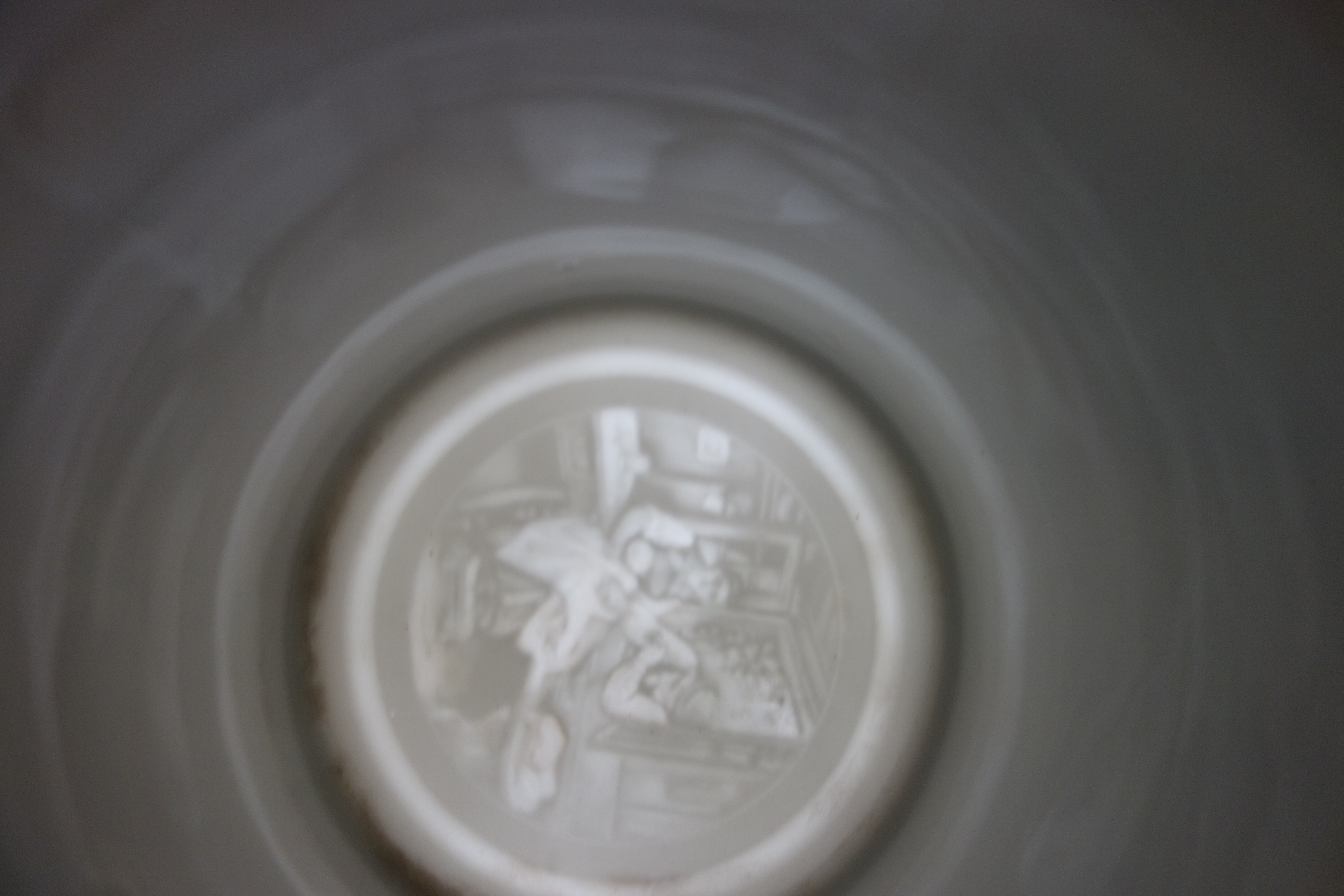 Thought it might! Easy to miss but important not to as these detailed lithopanes are collectible even if the rest of the stein was blank.

Great photo of it. That's not easy to do.

The image is a composition of the marital idyll, a husband at the window reaches in to pet the new baby on the wife's lap. He's holding a pipe in his left hand.

This is a German regimental beer stein, as I'm sure you've figured out. It became a huge craze in the German military from around 1870 - 1914 to have ones very own personalized beer stein (bierkrug) emblazoned with regimental colours and inscriptions. All men were required to enlist for military duty at seventeen and once active service was completed after three years one became a reservist and it was always the reservists who commissioned the steins. Along with all sorts of other personal objects such as pipes, swords, mugs, belt buckles, etc., they became symbols of patriotic loyalty to the fatherland at a time of upsurge in nationalism and imperialism, not just in Germany, but all over Europe, including Great Britain. All of which, of course, ended in the pointless industrial scale slaughter of World War I. German regimental steins also died a death in the process, too.

I can't see a date anywhere on yours (usually there's one in the inscriptions somewhere) but it dates stylistically to the 1895 - 1905 period which is borne out by the uniforms and magnificent finial with the howitzer and two cannoniers and the thumblift in the form of a crowned spreadeagle, emblem of Prussian Germany, all typical of the period.

So this is the personal bierkrug (beer stein) belonging to a reservist soldier with the last name "Lötzbayer", hence the script across the top of the main panel:

The inscription around the rim reads:

"We stood on the banks of the Mosel for the protection of the Fatherland",

a fairly frequently found inscription on steins of regiments garrisoned at Metz, which is located at the confluence of the Moselle and Seille rivers (now in France, then in Germany, captured during the Franco-Prussian war). Metz was an important German defensive position on the border with France.

The faint script writing is virtually illegible (to me) but is typical of its kind, witticisms and clunky military humour. The legend above the group with the cannon I believe translates as "The strongest warlord can do nothing without his men"

I had hoped this distinctive lithophane would be enough to identify the maker of the stein blank, but according to stein aficionados it remains unattributed. It's one of the nicest I've seen on these steins.

These German military steins are highly collected. The enameling is a little worn in places, but otherwise you have an almost perfect, and certainly unique object. It would sell on line in the $300 - $450 range, so a full retail value of $900 would not be unreasonable.

Verified
Robert S. and 87 other Antiques Specialists are ready to help you
Ask your own question now
Customer reply replied 2 years ago
This auction was over an hours drive away and I went especially for this item which came with a Villeroy & Boch example and cost me £25 + costs! I love it that my eye is still working!! I got loads of other stuff so a good day.
Last question how would you describe it to list it?
Kind regards
Chris

Well spotted and well hunted down! How very satisfactory!

I would describe it as:

Customer reply replied 2 years ago
Thanks
Was this answer helpful?
Yes
No

Appraiser Alan AOA C
Certified & Licensed Adjuster/ Appraiser
All Organizational & Government Required Courses
9,398 satisfied customers
I have an antique German beer stein. Theres a sticker that
I have an antique German beer stein. There's a sticker that says "HANDICRAFT MADE IN GERMANY". It has a pewter lid with a cannon. The handpainted scenes include a picture of the regiment with a cannon… read more