S only, I ran across a couple of items while packing. (I'm…

For Robert S onlyHi Robert...
For Robert S onlyHi Robert, I ran across a couple of items while packing. (I'm moving next month.) I will break it up into a couple of questions. They probably have little value and am not planning on selling them but would like a detailed description.First is a carving. It stands 7:" tall. I have taken several photos of the base, very hard to photograph and looks like worm holes to me. :-)2nd is an etched glass block vase my parents got in Hawaii in the early 50's. I don't know if it's Frank Oda or ? as I can't find a signature anywhere. The block is 7 3/4" long, 3 3/4" wide, 8" high. The overall length in the stand is 9", 4 1/4" wide.
Show More
Show Less
Ask Your Own Antiques Question 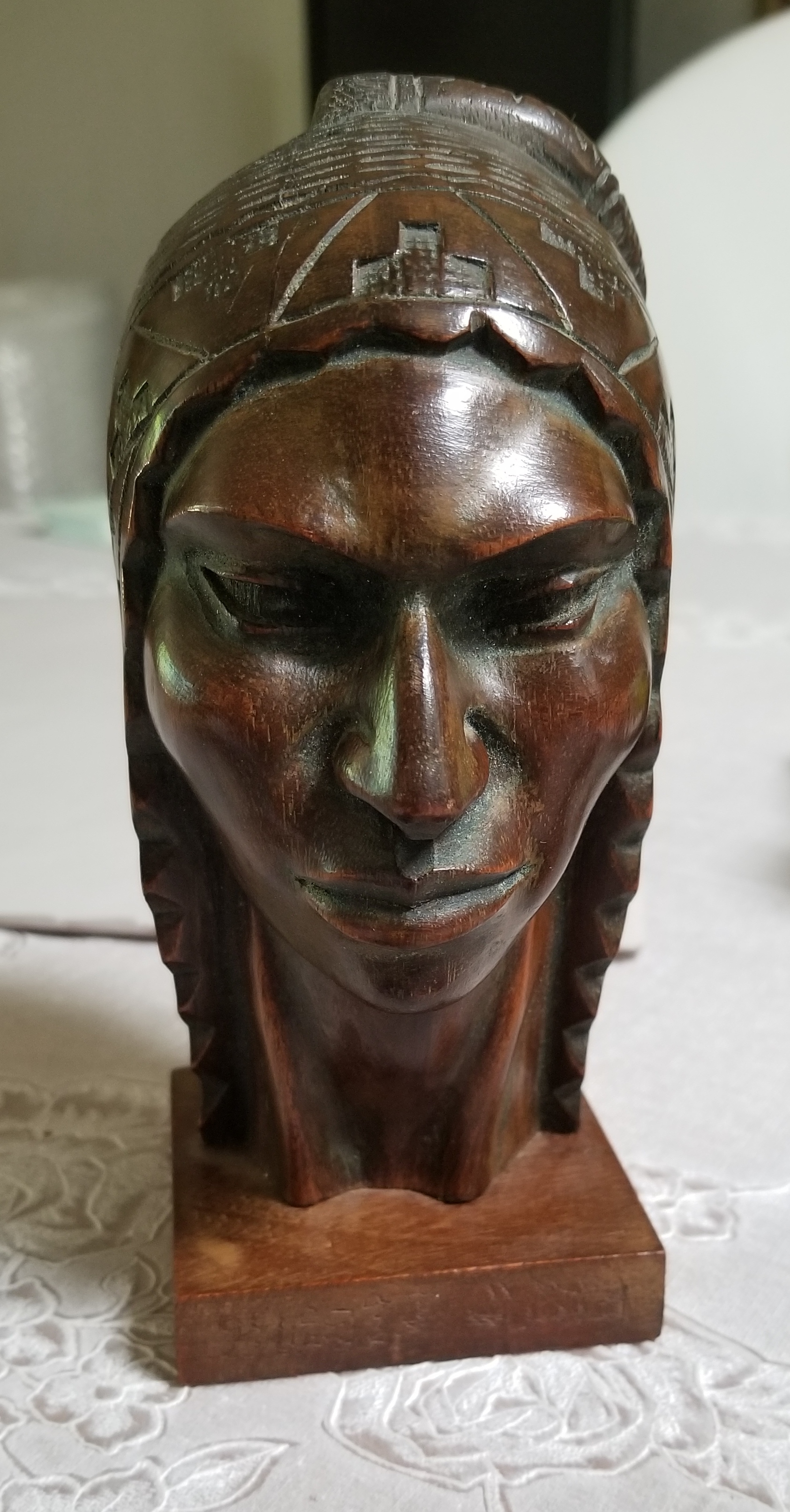 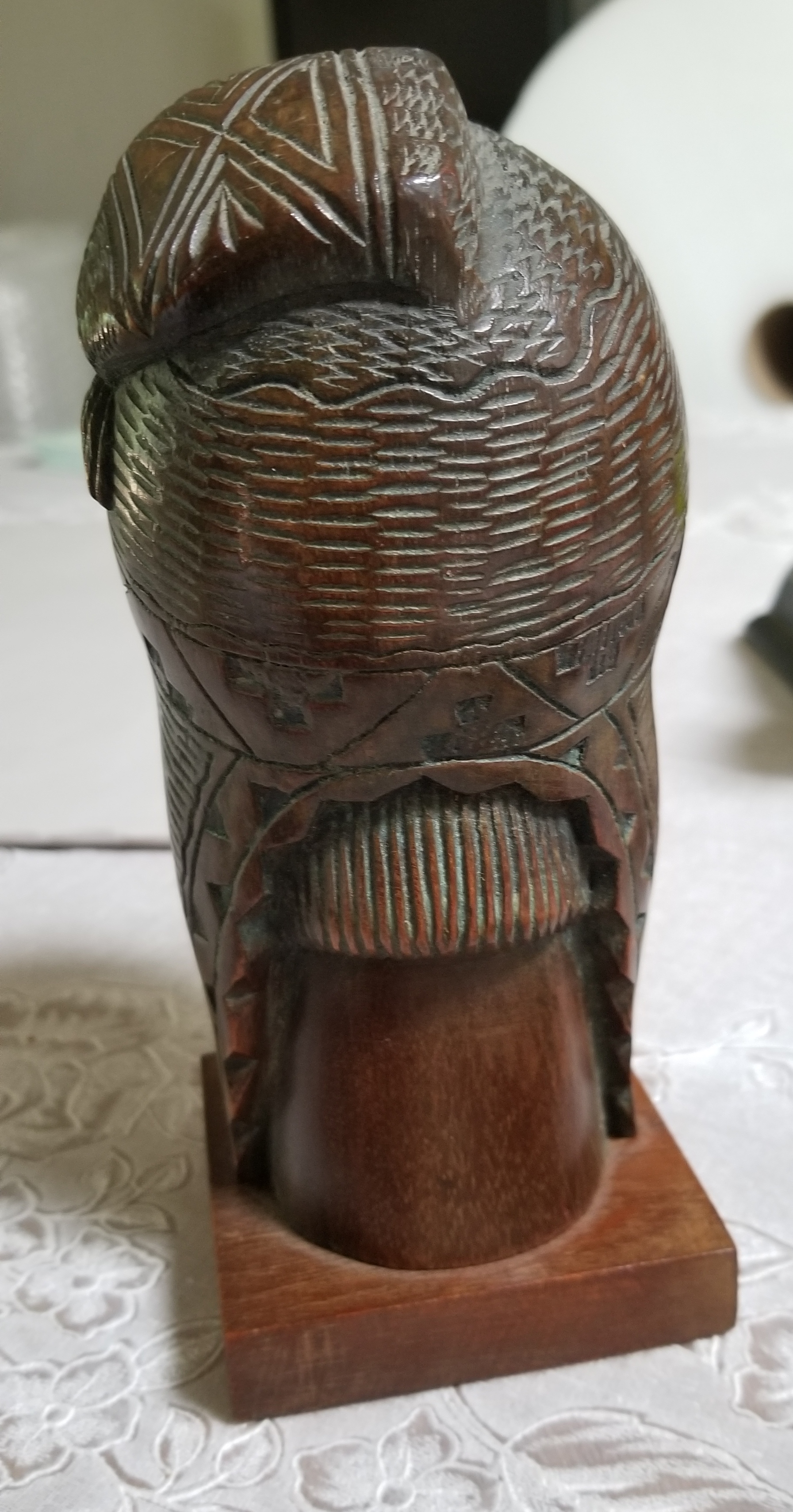 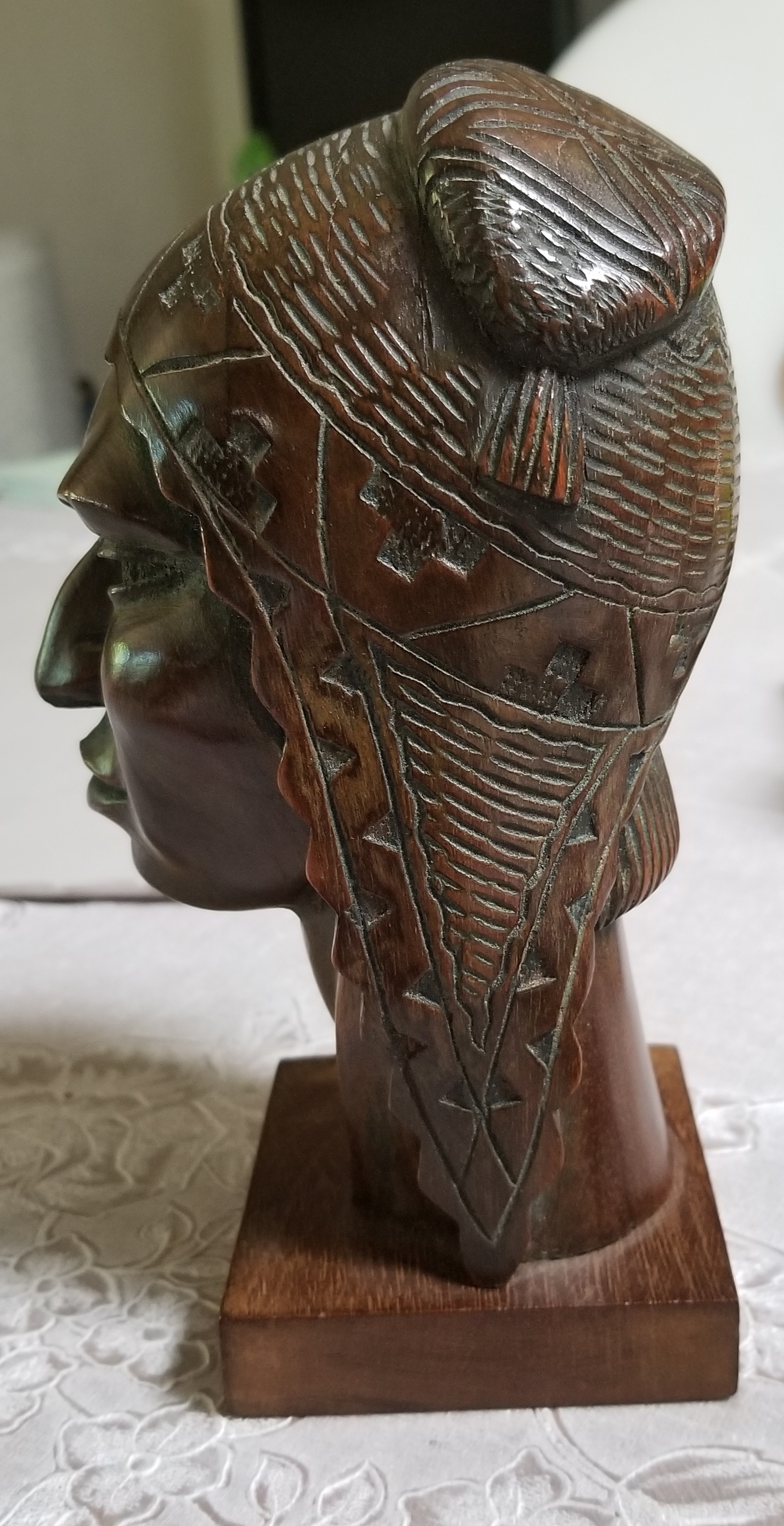 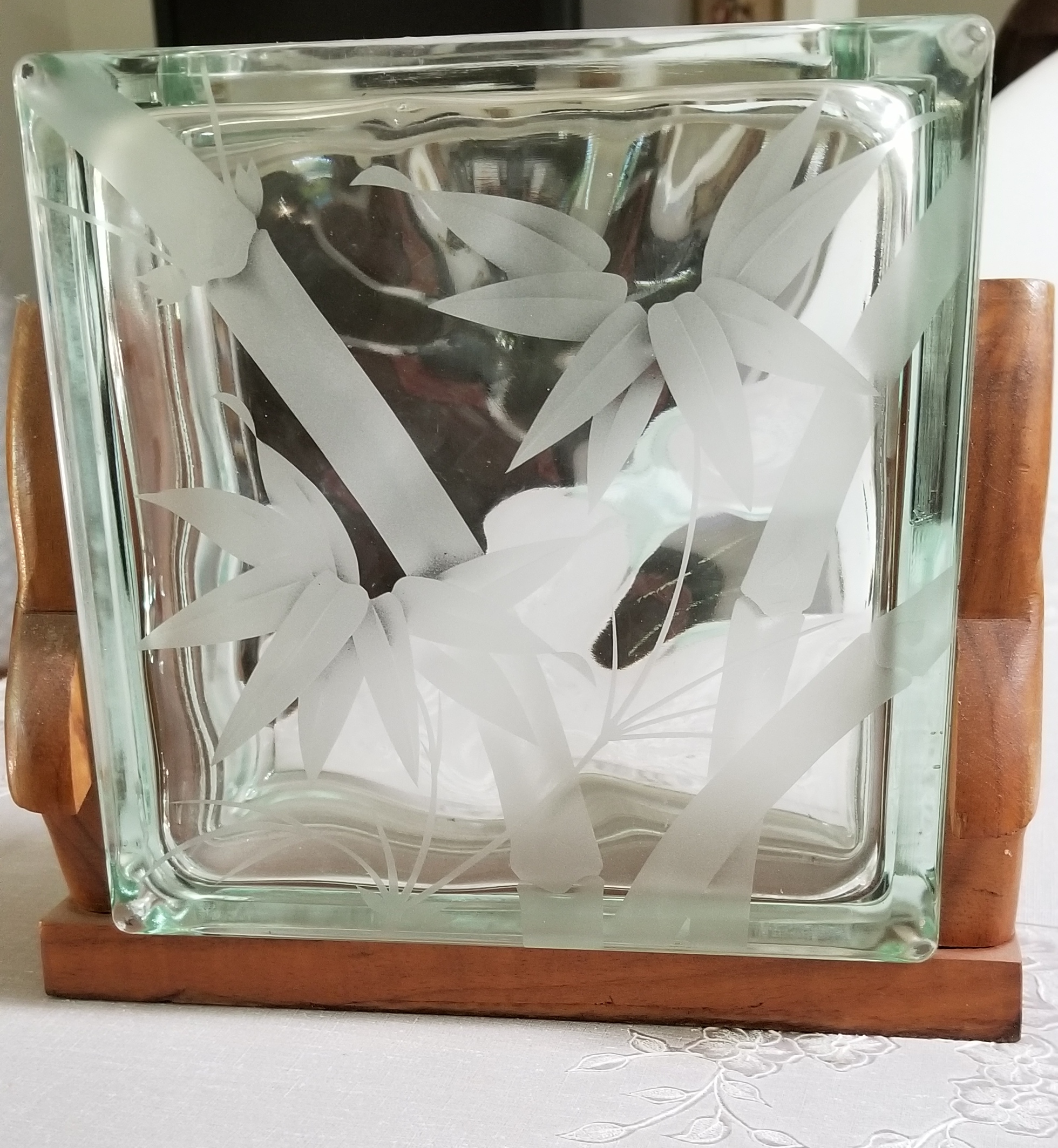 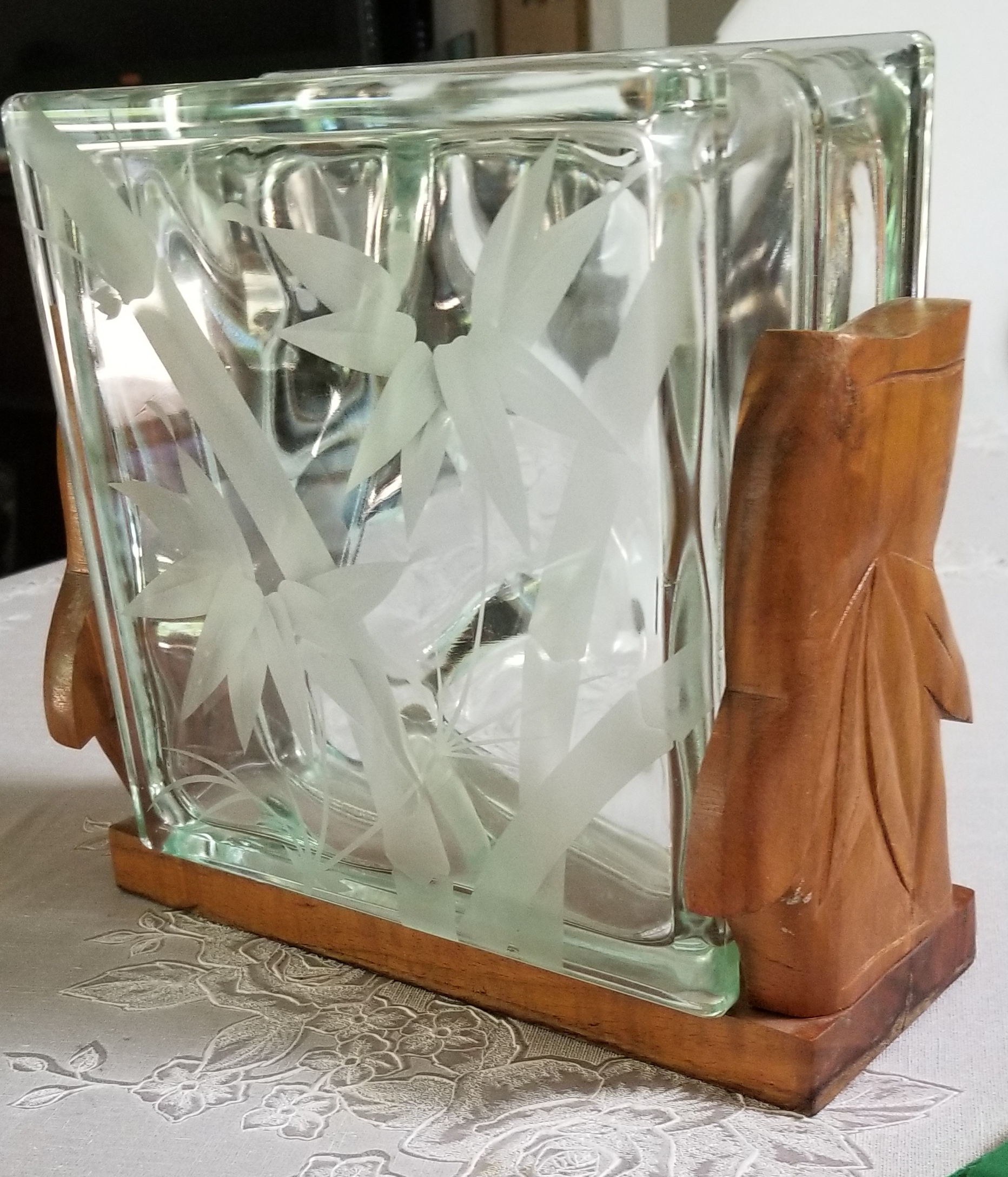 Answered in 14 hours by:
Antique Expert: Josie-ESA,  replied 2 years ago

Verified
Hello,
I'm Josie, a moderator for this topic.
I sent your requested Expert a message to follow up with you here, when she is back online.

Just letting you know I got the Indian head carving.

I'll have an answer for you as soon as I can.

This is a really beautifully carved depiction of a Peruvian man in a traditional knitted headdress, known as a chullo, and dates to the 1930s when all things Art Deco became so popular. Art Deco was strongly influenced by the fascination that artists had for traditional costumes and cultures and many of the geometric motifs were lifted straight from the ornament seen in Mayan, Aztec, Inca and Pueblo decorative arts, as here with the decoration on the chullo.

It's not known who precisely was the sculptor of these carved heads (they appear quite frequently in the salesroom) but there's a well known family of master carvers in Lima, Peru, all descended from a Javier Montalvo, any one of whom may have been the creator of this piece and who's work is all very similar.

The strange wormy 'writing' around the base is a mystery, and it's not on the bases of any others I've seen, so is no help in providing an attribution.

Prices for these are all over the place. There's a similar head, (it's bigger than yours at 12" so life size rather than half life size) being offered for sale (retail) here on 1st Dibs for $3400, but this is a ridiculously high price even so -most 1st Dibs items are way overpriced even by upmarket retail standards. Also, before you get too excited I've also seen these for sale on eBay go for as little as $17 as this 7" tall example, similar to yours sold for. Therefore somewhere in between these two extremes is where I would place yours.

Given a proper description of its origins and inspirations, and the artistic merit of the carving (very high) and the material itself, a dense hardwood similar to mahogany, also its age, I think $600 would be a fair retail/insurance value for your piece. If you were to sell at a good antique auction then expect about 40% of this, say $200 - $300.

These glass block sculptures etched with various botanical motifs, here bamboo leaves, are by Frank Oda of Hale Pua (House of Flowers) an art studio started by Frank Oda immediately post-World War II and continued until 2007 by his son Gary Oda. It's not easy to date them because they have been created in almost exactly the same way since the beginning, so it's great that you remember when your parents acquired yours so you know it's from the earliest period of the Hale Pua studio. Having said that, whether they are newer or older doesn't seem to have much bearing on value, the secondary market value appears to be around the same.

Hope this is helpful

Verified
Robert S. and 87 other Antiques Specialists are ready to help you
Ask your own question now
Customer reply replied 2 years ago
Thank you Robert. I have to say I'm a bit surprised about the carving. Those are my husband's passion. I think he bought it for about $5, who knew. The other 40 or so are already packed so will have to get to them another day. I was in the ballpark with Frank Oda. Always meant to do something with it but here we are decades later. LOL Many thanks for your expertise.

Yes. There seems to be growing collector interest in these early Art Deco era pieces by local master carvers. $5! What a find!

100% satisfaction guaranteeGet all the answers you need
Share this conversation
Related Antiques Questions
FOR RUSUFDAVI. Age, origin, value. Good. I have sent him all
I have sent him all the details.Customer: Chat is completed… read more

Glenda B.
Antique Appraiser
College
32,400 satisfied customers
I. Have an old opium pipe I would like appraised. I know
I know very little about it. It appeared in some items from a deceased couple who likely spent time in China in the early part of the century … read more

Nora
Expert in Fine and Decorative Arts: Renaissance through Contemporary
Post-Graduate from Christies London
26,584 satisfied customers
S. only Small carved elephants and buddha from China. These
For Robert S. onlySmall carved elephants and buddha from China. These were some more of the items my parents brought back from China in 1947. I took the photos some time back and I know you don't do i… read more