For Doris Only. MILK PITCHER...
For Doris Only. MILK PITCHER. Marked Edwin M. Knowles China Co.,VITREOUS inside a piece of pottery. 1514. Measures 5 inches high. 4 inches across bottom. No wear at all to the gold. Lightly crazed all over. I have a pendant. Carved, set in 14K. Will send when I manage to get better photos.
Show More
Show Less
Ask Your Own Antiques Question 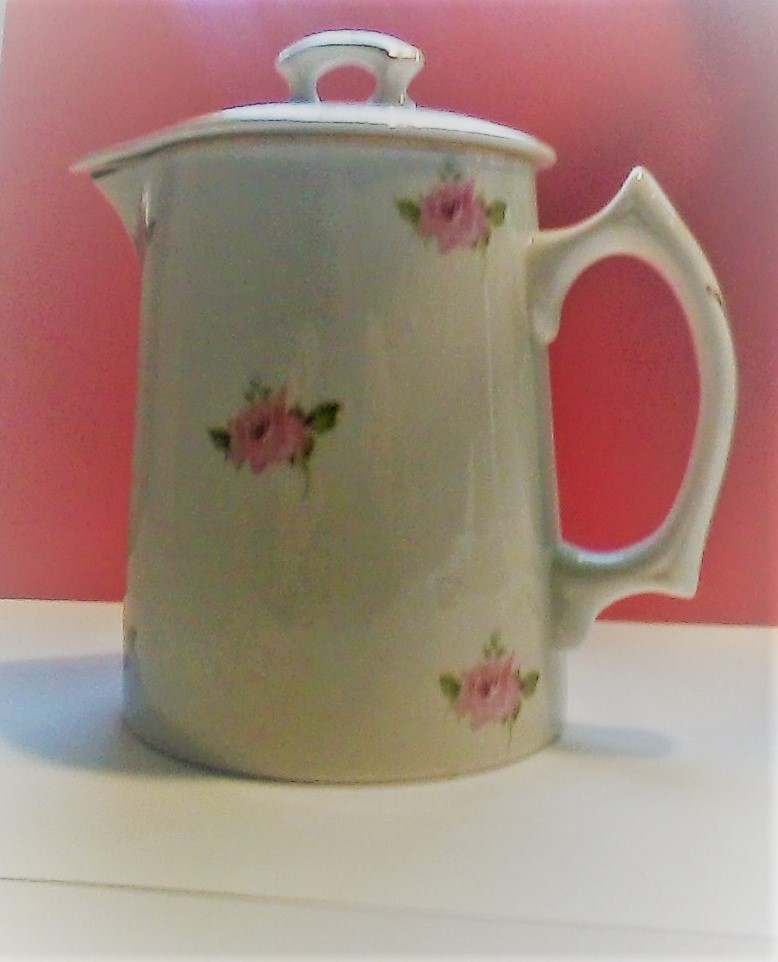 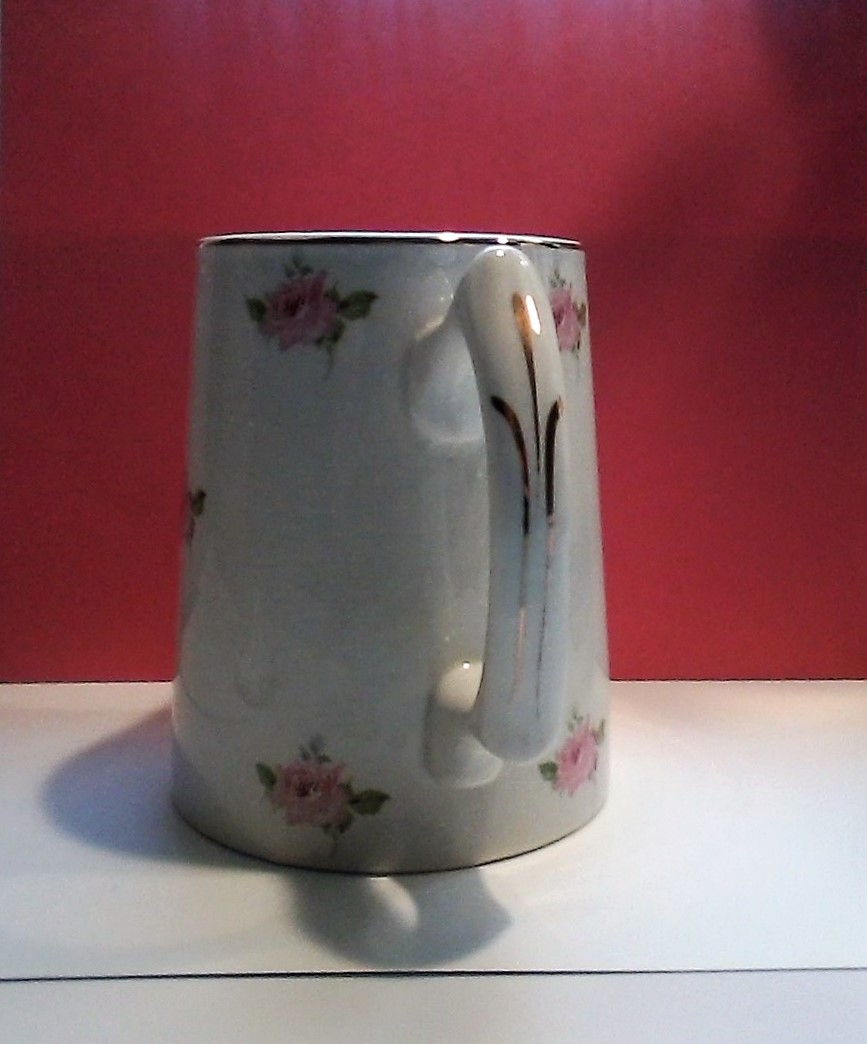 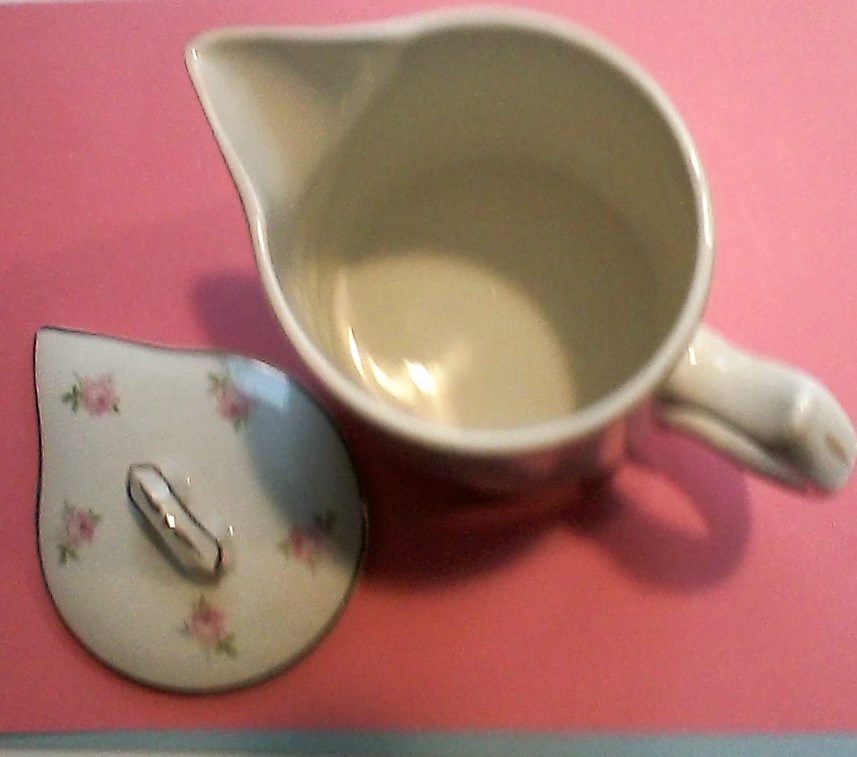 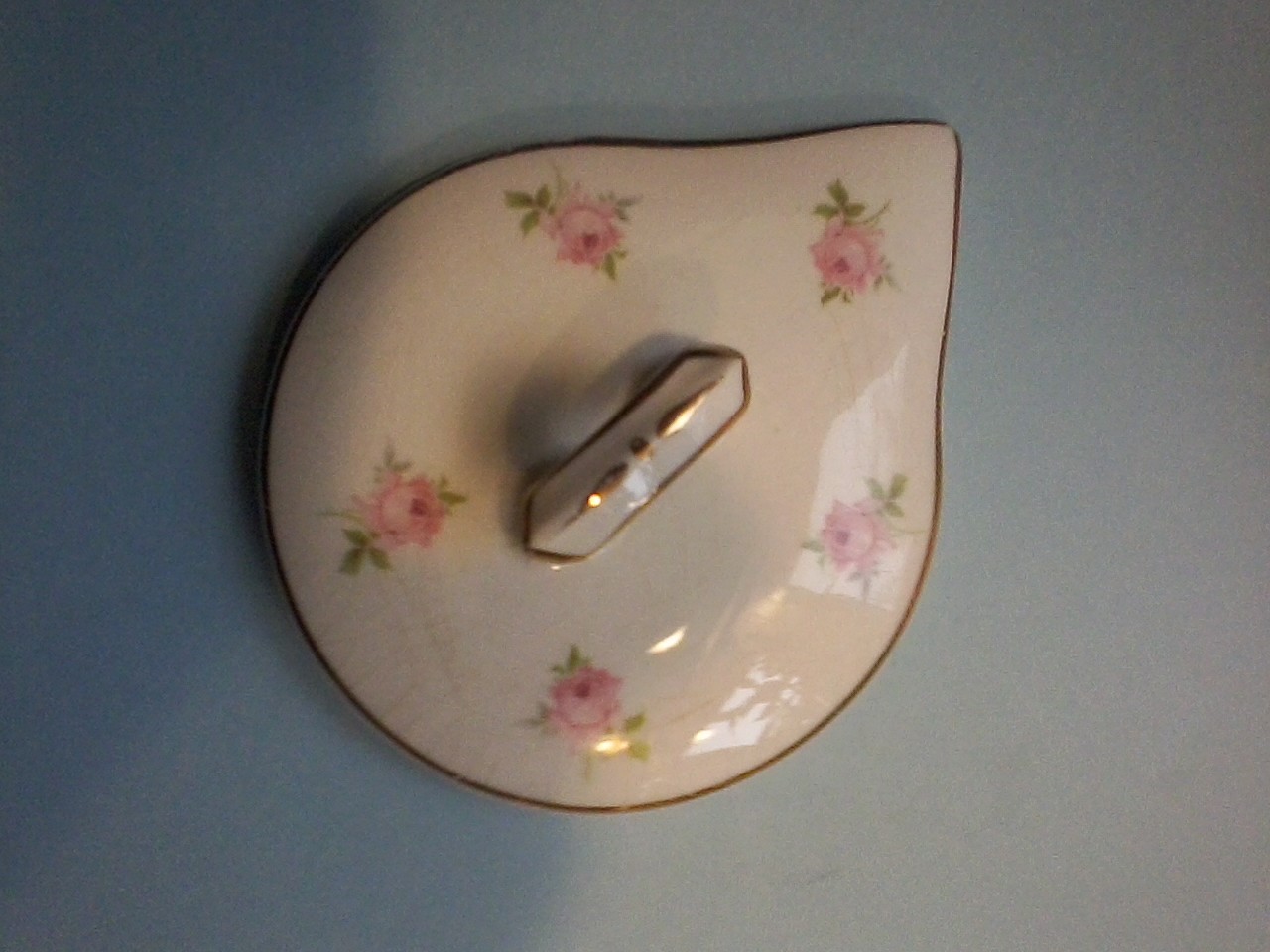 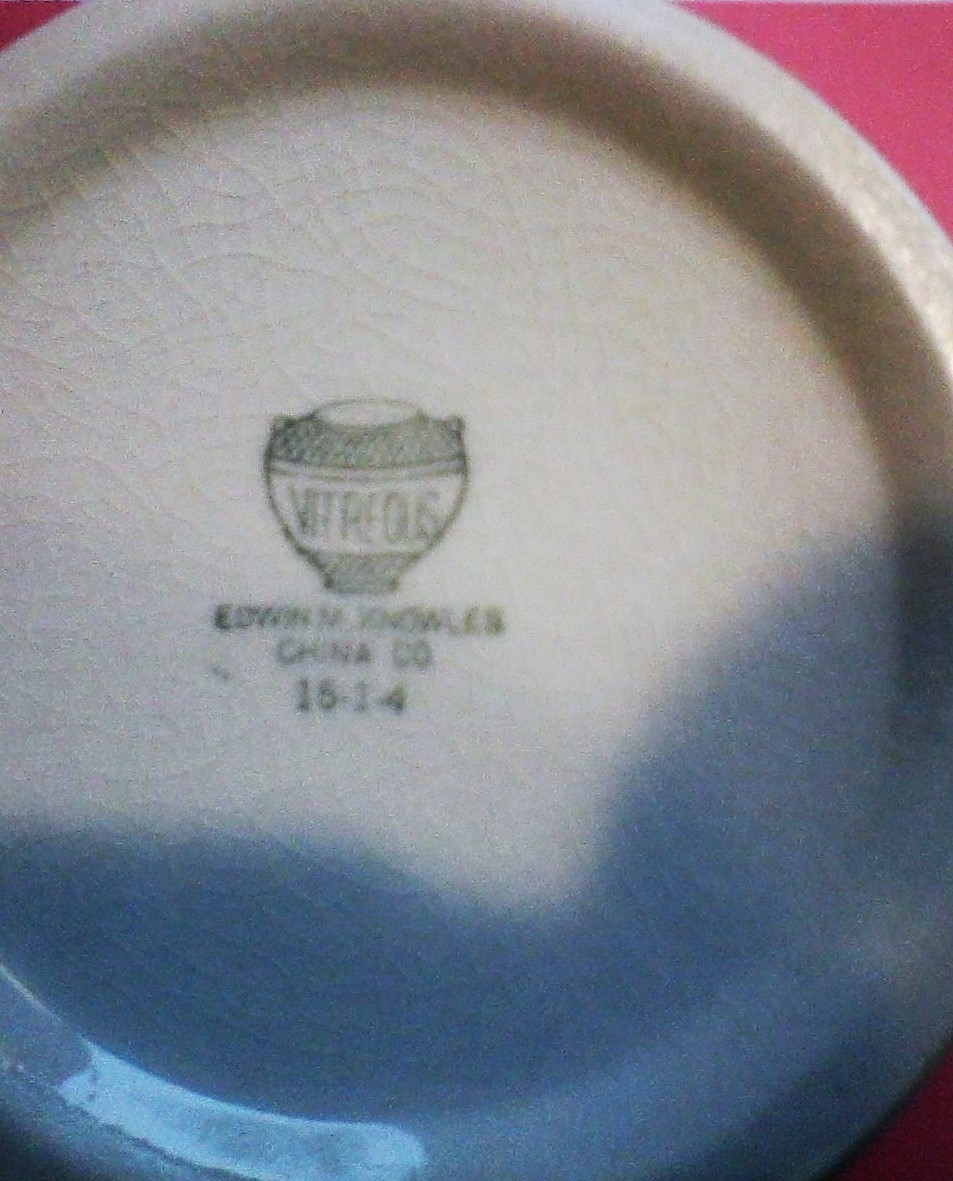 I am working on this now. In about 40 minutes I must go to the services for the head of my former girls school here..

She was just 50 and the current head. Her death was sudden and totally unexpected - liver cancer. It has been a shock to the whole school, including my sophomore granddaughter.

Customer reply replied 3 years ago
Ahhhh...so sad. My condolences. Cancer is insidious. I think of my beloved niece (Matthew's Mother) every day. Miss her so much. Not to worry. I'm not in any hurry. Waiting for Kay to take photos of pendant. She may stop by later. Mine are awful.

I wanted to locate the exact pattern but it does not seem to be listed in any of my resources.

The mark was used by the Edwin Knowles China Co (West Virginia) from 1900-1948. Knowles ceased production in the 60s.

It would be usual for this piece to be a milk pitcher. The examples I found of Knowles milk/cream pitchers were not lidded.

As a 5" inch lidded piece, this either was a small chocolate pot or a bachelor (individual) coffee pot.

I hope this helps.

Good pictures like this really help and, yes, they are hard to take, especially those of marks.

Verified
Doris and 87 other Antiques Specialists are ready to help you
Ask your own question now
Customer reply replied 3 years ago
This does not appear to be hand painted. How is the design applied? Is this called transfer?

This is a very good question. It is transferware. Although I have all ten fingers, I am a one finger typist; so, I copy and paste articles when they are good explanations or history.

"Transferware is the term given to pottery that has had a pattern applied by transferring the print from a copper plate to a specially sized paper and finally to the pottery body. While produced primarily on earthenware, transfer prints are also found on ironstone, porcelain and bone china. Ultimately, many thousands of patterns were produced on tens of millions of pieces. The process was developed in the second half of the 18th century in response to the need of the newly emerging British middle class for less expensive tableware. Many factories claim responsibility for the origin of the process, but, in fact, it was probably a combination of men and materials that came together in the English county of Staffordshire, where there had been pottery making since the 16th century. A combination of raw materials, men of science such as Spode and Wedgwood, cheap labor and new canals that connected Staffordshire to the major ports of Liverpool and London, made the transferware production possible and profitable.

At first, the transfer patterns were copied from the blue and white Chinese designs found on the hand-painted porcelain that was popular in the 18th century. At the turn of the 19th century, while potters were still using Chinese patterns as their primary source for inspiration, they began to incorporate European features into these designs. By the 1820s, arguably the golden age of transfer printed pottery, the number of potteries grew and thousands of patterns were printed to tempt any available market. The English may have lost the War of 1812, but their potters were ready to sell pottery with patterns lauding the new American nation to the American market. Important buildings, landscapes and war heroes are just a few of the patterns that appealed to Americans. There were many foreign markets, as well as the home market, to keep the potters busy.

The new technology, fueled by the Industrial Revolution, made Staffordshire the center for pottery making and development for more than 200 years. Although it has been estimated that approximately 90 per cent of British transferware was manufactured in Staffordshire, other areas of Great Britain such as Leeds, Liverpool, Swansea and Scotland were also producing transferware patterns for the mass market. It is only since the 1990s that the pottery industry has mainly moved its production off shore and out of Great Britain."

Obviously, the article I pasted addresses English transferware but the same methods have been used in USA.

Thank you so much for the positives.

Customer reply replied 3 years ago
Thank you. Getting ready to send Q re pendant. Kay was here and photographed. By the way, if you remember the coaster sets where I had 14 coasters and 2 caddies. Interestingly enough, I was on a trivia site and what should pop up but a window showing a set with SEVEN coasters. I wonder if, indeed, they were sold as a set of seven. Unusual if so. Here's the link. www.chairish.com/product/568616/sterling-glass-coasters-set-of-7

If you look at the type of merchandise Chairish often sells. It is often "consigned/used/old/vintage or antique" items.

I am absolutely certain the original 1920s set had 8 coasters with each caddy.

By the way, the ones on Chairish ar grossly overpriced. Very few people use these now as beautiful as they are. Pottery Barn furniture is waterproof.

Customer reply replied 3 years ago
It's the first time I ever saw that chairish site.I take your word over theirs!

Thank you for the vote of confidence! ;D

CASSOC (Randi)
Certified Appraiser
Vocational, Technical or Trade Scho
1,522 satisfied customers
Show more
Disclaimer: Information in questions answers, and Show More
Disclaimer: Information in questions, answers, and other posts on this site ("Posts") comes from individual users, not JustAnswer; JustAnswer is not responsible for Posts. Posts are for general information, are not intended to substitute for informed professional advice (medical, legal, veterinary, financial, etc.), or to establish a professional-client relationship. The site and services are provided "as is" with no warranty or representations by JustAnswer regarding the qualifications of Experts. To see what credentials have been verified by a third-party service, please click on the "Verified" symbol in some Experts' profiles. JustAnswer is not intended or designed for EMERGENCY questions which should be directed immediately by telephone or in-person to qualified professionals.