S. This is a find from last weekend that I just cannot seem…

Robert S. This is a...
Robert S. This is a find from last weekend that I just cannot seem to locate. 2 Chinese cup & saucers w/different pattern but I believe they may be from about the same time period. #1 is a cup & saucer mainly yellow with a green dragon and other side is a blue dragon. The only info is MADE IN CHINA. The cup is 3.75" across & saucer 5.25" across #2 is a very cluttered Chinese cup & saucer rust color and gold with 2 pictures inside and lots of flowers. The outside of the cup has rust colored leaves w/gold. Cup is 4.25" across & saucer 5.75" across. No hurry on these.Linda
Show More
Show Less
Ask Your Own Antiques Question
Share this conversation

Answered in 32 minutes by:
Antique Expert: Josie-ESA,  replied 3 years ago

Verified
Hello,
I'm Josie, a moderator for this topic.
I sent your requested Expert a message to follow up with you here, when he is back online.

Just letting you know I got the Q on the Chinese cup & saucers.

Can you go ahead and attach the photos when you get a chance.

Customer reply replied 3 years ago
I'm sorry, slipped my mind to attach photos. I will send the other one's photos separately. 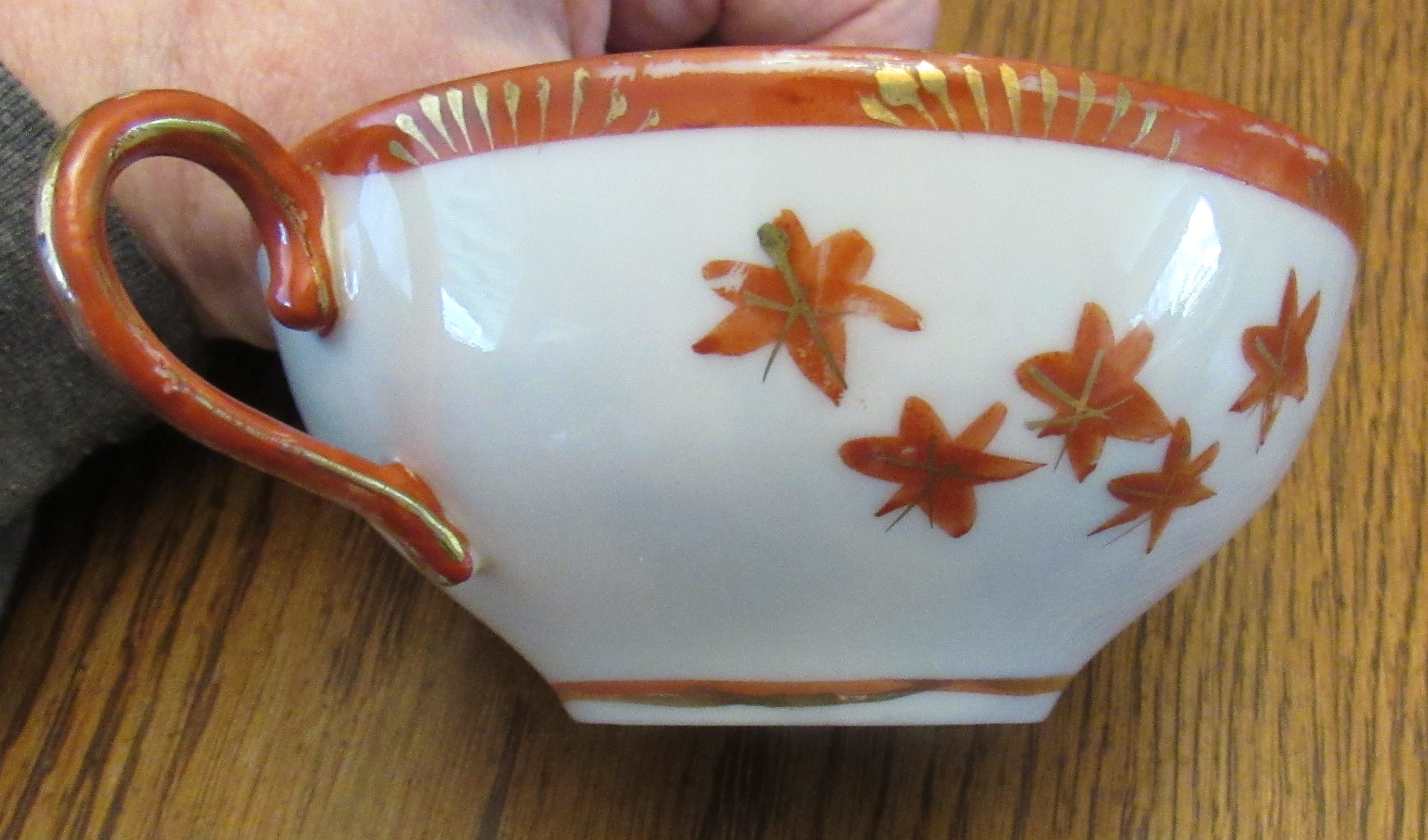 This one is actually Japanese rather than Chinese. It's a very pretty example of Kutani ware. You can usually recognize Japanese Kutani by the thin translucent porcelain and red rims, handle and other accent areas all embellished with gold on top. This red on gold is known as "kinrande" .

The set has typical scenic vignettes framed in a five-lobed shape meant to represent a single cherry blossom, a much revered flower in Japan and surrounded by all sorts of flowers many of them recognizable such as the hibiscus and the chrysanthemum blossoms. All done in a particular style, with hand painting over a printed outline of the design, that dates this cup and saucer set to the 1930s.

"Kutani" is both a type of ceramic (usually porcelain) and a geographical region. It is named after a village called Kutani -that literally means "nine" (ku) "valleys" (tani)- where the original kiln was located, but now refers to a whole region of china making in the Hokuiku district of Honshu, the main island of Japan and, by the time yours was made, simply refers to a type of enamel decoration made in many different centers throughout Japan, but mostly in Nagoya, the ceramic capital of Japan since the late 1800s. The decoration of Kutani is typically over-the-glaze in a particular palette that often includes bands of rust red embellished with gold, a decoration which you can see around the base and rim and on the cover and finial.

The seal mark on the base is a two character mark in kanji script that simply says:
九谷
or "Kutani"
By the 1930s much Kutani was marked in this way, what's referred to as a generic mark, as wares such as these were destined for export to the west, so no information about specific maker, kiln, decorator, potter etc, can be attributed. Kutani collectors understand this and are looking at other features of the china such as the artistic merit and skill of the decoration.

This one is definitely made in China! These rubber stamped marks are believed to date to the 1960s during the so-called "Cultural Revolution" when China re-kindled its behemoth porcelain industry at Jingdezhen, in order to export as much decorative porcelain as it could and for as low a cost as possible. As a result, this era has gotten a bad rap and the odd pieces with any merit never quite get the credit they deserve. This piece, however, is somewhere in between, particularly because it appears to be all hand painted, rather than printed and that imperial yellow ground applied as a thickish opaque paste enamel (called fencai) really makes it zing.

The main theme is the pair dragons confronting each other and centering the "heavenly pearl wisdom" (that red blob) the jewel that grants all desires in the Buddhist tradition. The dragon in the far east is a benign mythical creature of the sky, a bringer of wealth and power and good fortune.

Verified
Robert S. and 87 other Antiques Specialists are ready to help you
Ask your own question now
Customer reply replied 3 years ago
As usual Robert your answers were a big surprise, especially the one from China. I thought the other would be the better price of the two. Another 5 Stars for you, wish I could give more stars but they don't have them. Than you again for the wonderful stories about these. I have one more that I will be sending later. Its a large NAO Swan.

Yes, it often surprises me what collectors think about the comparable merits of two different Oriental items. Having said that, eBay can be a funny place and sometimes, particularly when there are just a few bidders, the market appears to think the other way around!

Many thanks for all the stars and for wishing for more, you are too kind!

Have a wonderful day!