Could you very kindly attach a photo of it, and one of the mark. Also, you should see an artist's signature in the artwork somewhere on the side of the vase. A photo of that would be a great help too.

(a) Just click on the "Add Files" tab and it will bring up the photos in your computer for you to select and attach here where you are typing to me.

(b) If you don't have an image in your computer, email yourself one from a smart phone, save it in you computer and proceed with (a).

Here's a link to picture attaching help if you need it.

Customer reply replied 2 years ago
I think the picture of the vase & markings on bottom are attached. I don’t see a signature anywhere. But, on the bottom of the vase itself are letters that look like TK with a 4 underneath them on one side & a 14 over a 16 on the other side. 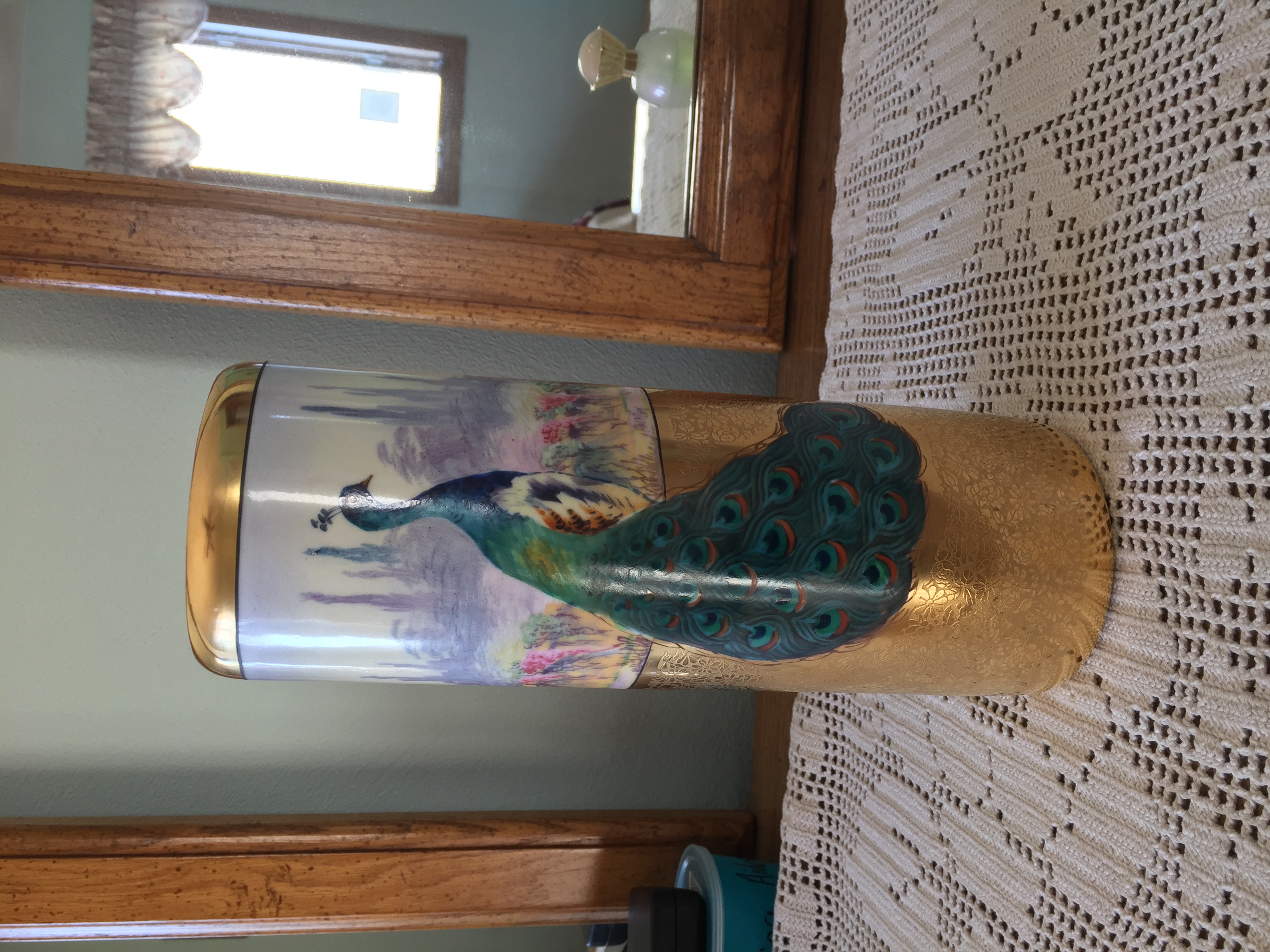 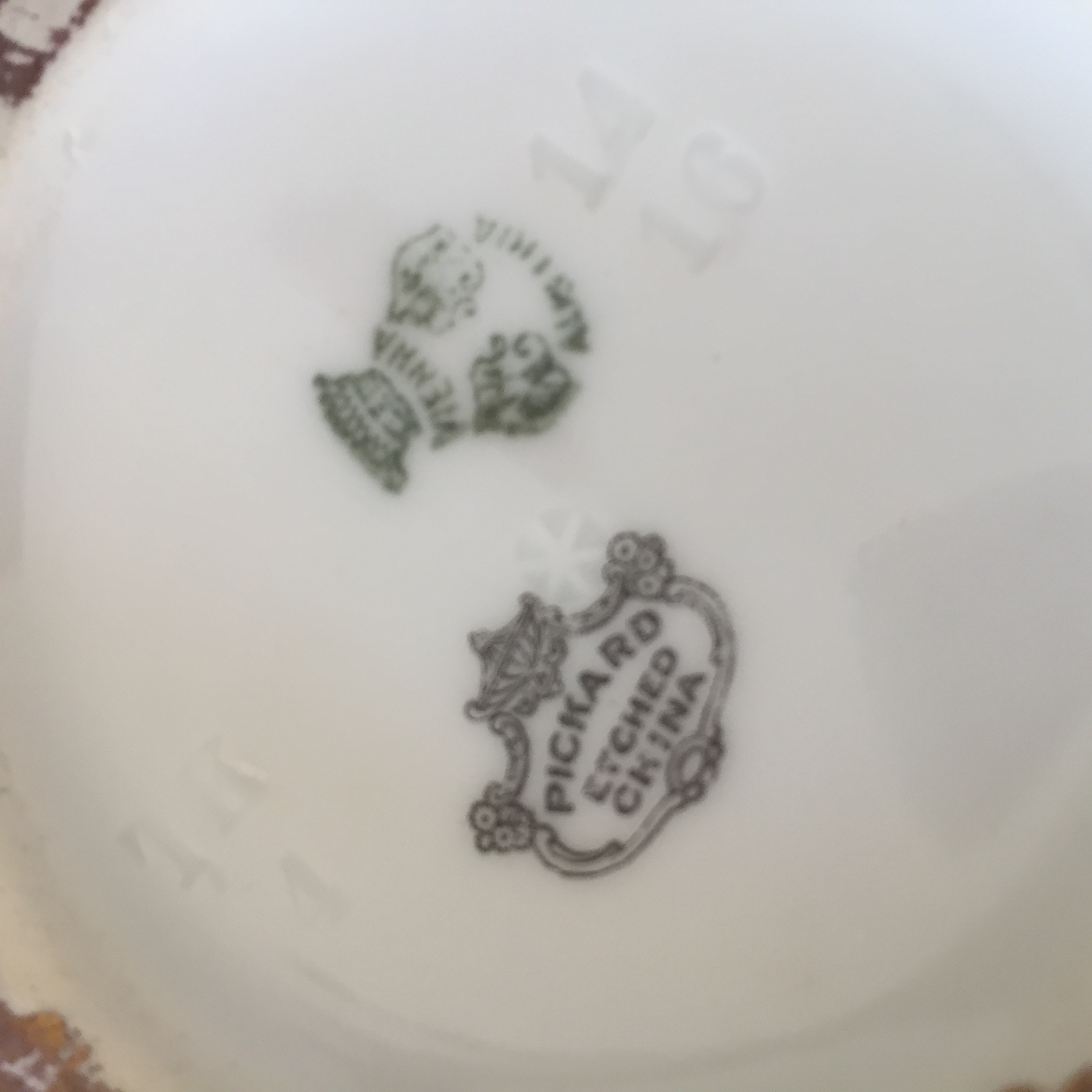 Thanks so much for the excellent photos, that's all I need to see and yes! It is signed! If you look carefully to the right of the peacock you'll see the name "FALATEK" (it looks like a continuation of the grass, so understandably hard to see) in purple script.

Louis H. Falatek was a well listed artist who worked for Pickard China from 1915 to 1922. He was born in the Hungarian sector of Austria in 1894 and emigrated to the US in 1914 just before the outbreak of World War I. In 1922 he moved to Rivir studios, and later changed his name to Falk, so this piece dates to the late 'teens or very early 1920s, so I guess it's been in the family since new!

Falatek specialized in these scenics for Pickard and was one of a number of artists who did this peacock pattern with the etched gold border design -known as Pickard's "Rose & Daisy All-Over-Gold" pattern.

The other mark is for the manufacturer of the porcelain blank made at Karlovy Vary in Bohemia (Czechoslovakia) at one time part of Austria, hence the "VIENNA AUSTRIA" (in the mark), but actually nearer Prague. These porcelain blanks were exported by the ship load to the US to be painted at professional decorating studios such as Pickard in Chicago, who were, and still are, the top name in American china painting.

As such, your piece has more than held its value since its appraisal in 1995. At 14" tall, this is a large example of a Pickard peacock vase and must make quite an impact wherever it's displayed and collector interest in all Pickard has increased steadily in the past twenty years. If you were to see your vase for sale in a retail setting, in an antique store, say, it would have a full price tag of $4,500. This is also the replacement value for insurance purposes.

Customer reply replied 2 years ago
Wow! I have found 3 other antique pieces from much the same period. Not much info on those. If I send you pictures, could you look at them, or advise me where I should check!

Sure, I'd be happy to look at your other pieces. If it's okay with you, I'd like to do them in separate questions. That's because we appraisers get paid by JustAnswer by the question (at no extra charge to you).

Just open a new Question, and make sure you put "For Robert S. only..." in the subject line and it will be sure to get to me. Hope this makes sense!
Robert.

Customer reply replied 2 years ago
Am going to pick grandchildren up from school now. Will do it later this evening. Thank you for your help!

No problem! I'll be here whenever you're ready. Grandchildren definitely come first!

Talk to you later.