S. only 2 old glass candlesticks w/ bobeches, I have these…

For Robert S. only2 old...
For Robert S. only2 old glass candlesticks w/ bobechesHi Robert,
I have these old, thick glass candlesticks that I would like detailed information on. They stand 9 1/2" tall, base is 4 3/8" diameter. The bobeches are 3 7'8" diameter. The tops where the candles go are 1 3/8" OD. One of them (last pic) has a small hairline crack. They are a little yellow but not as yellow as the pictures show (bad lighting). If they are worth it, I will get some prisms for them.
Thanks (Jeremy, Jodi) Janet There is no hurry on this, whenever you get the chance.
Show More
Show Less
Ask Your Own Antiques Question 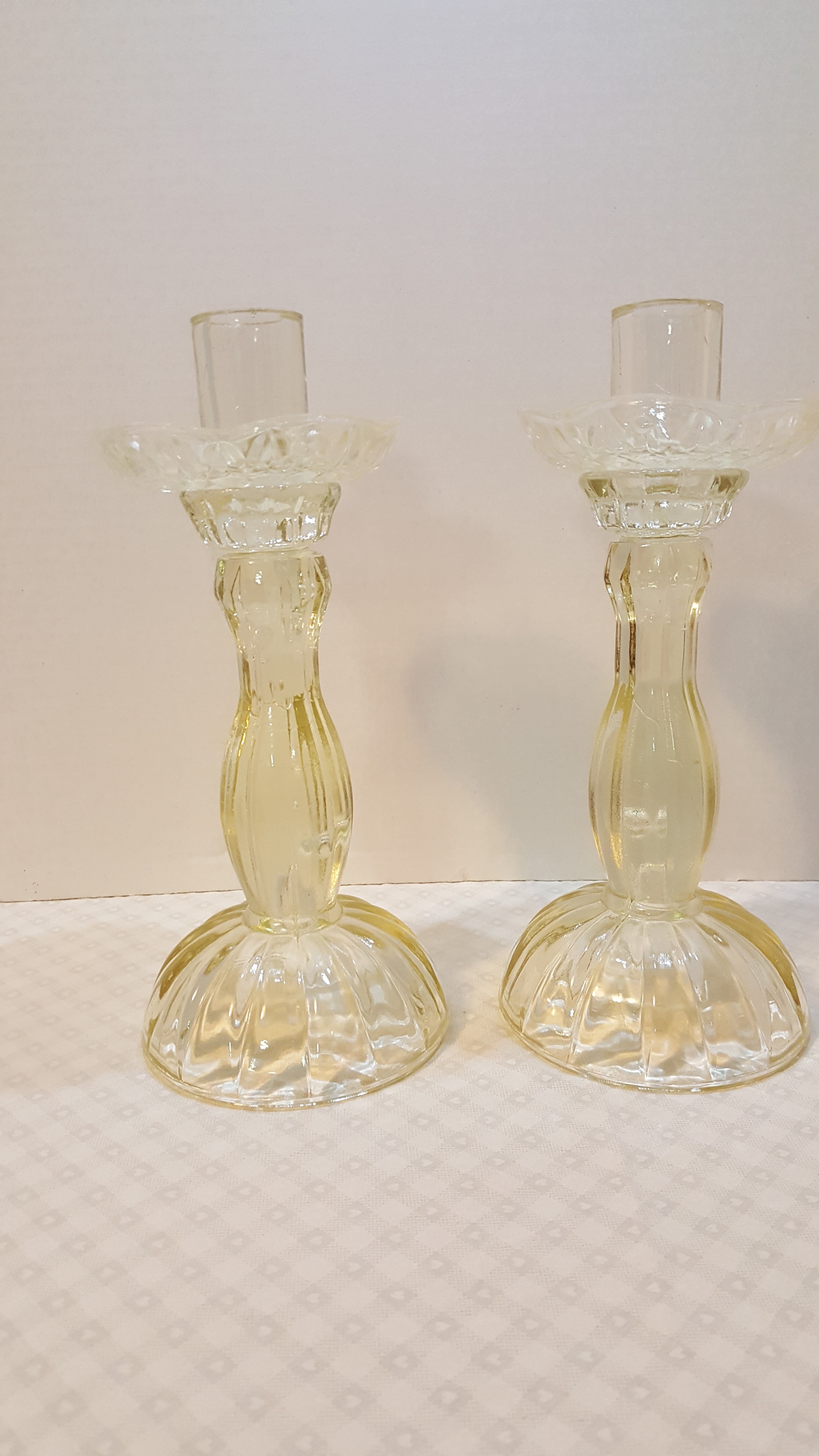 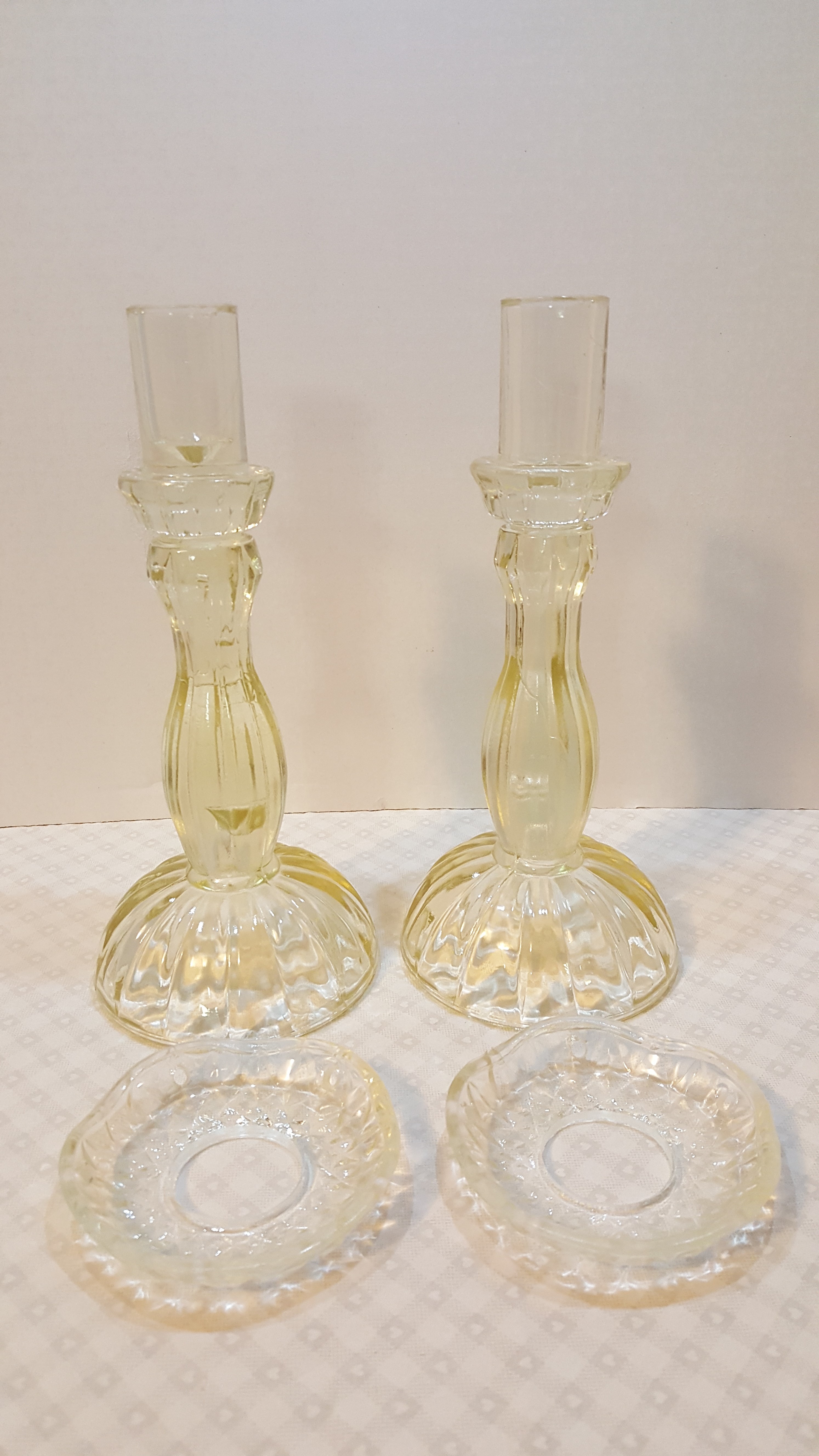 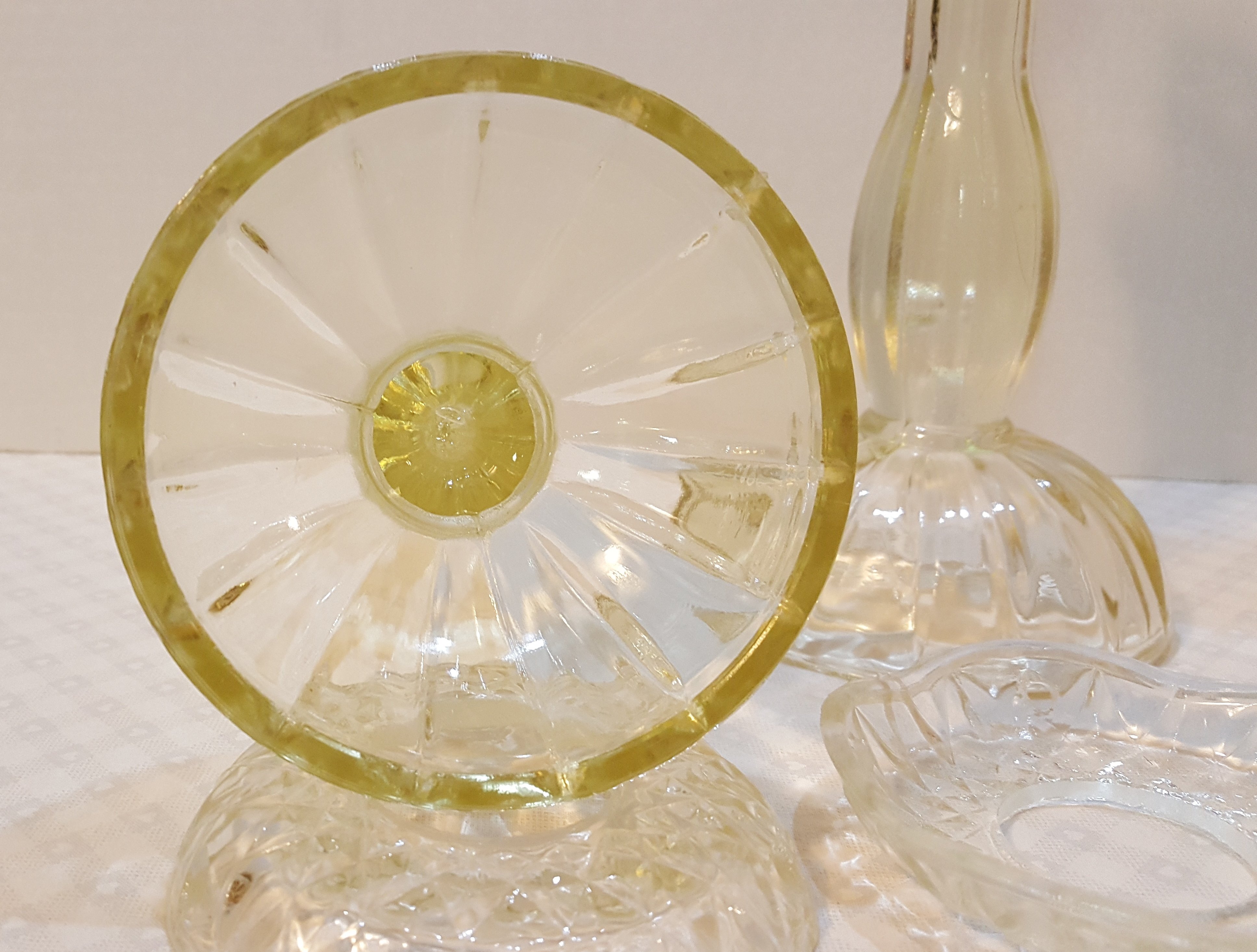 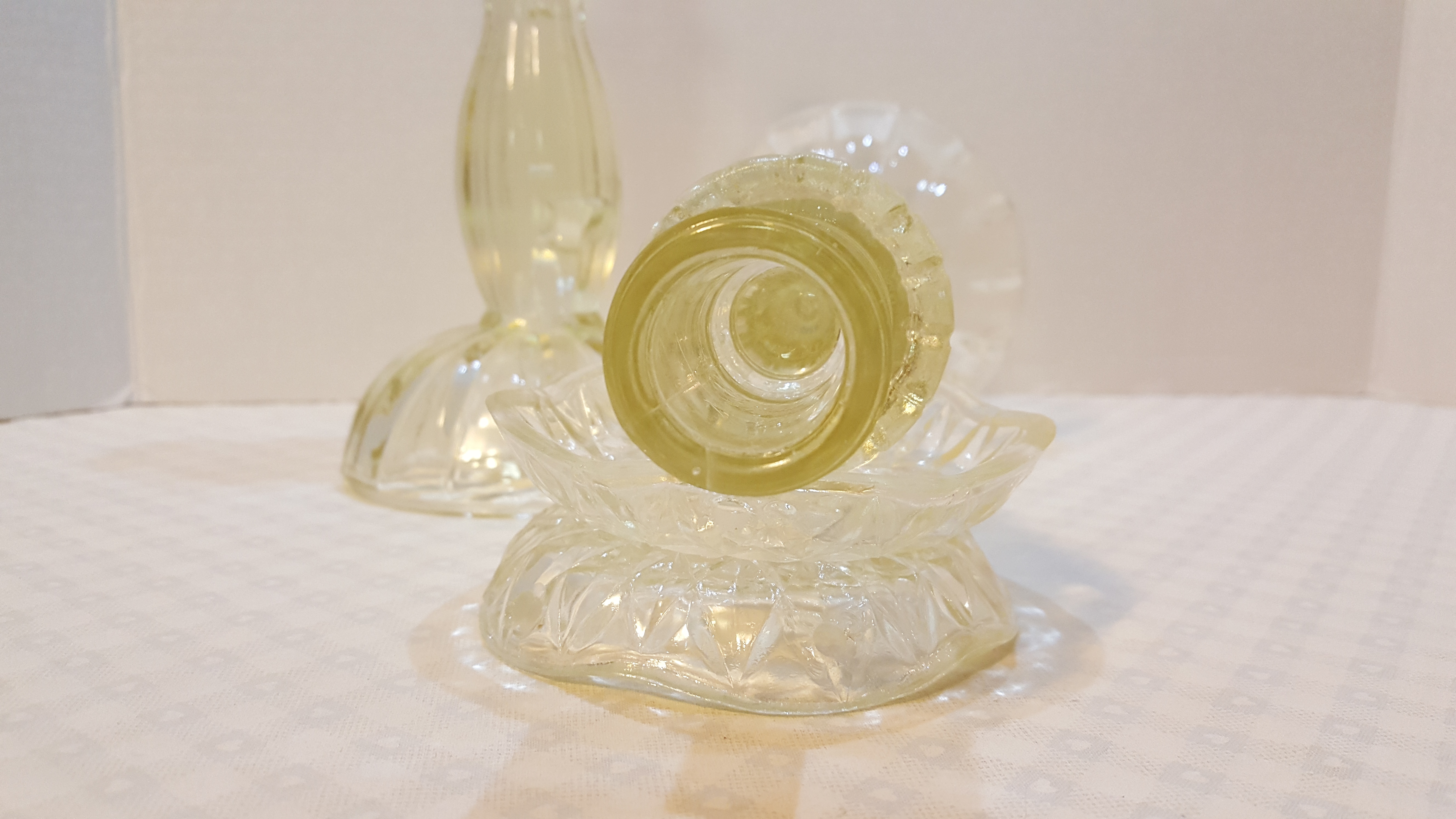 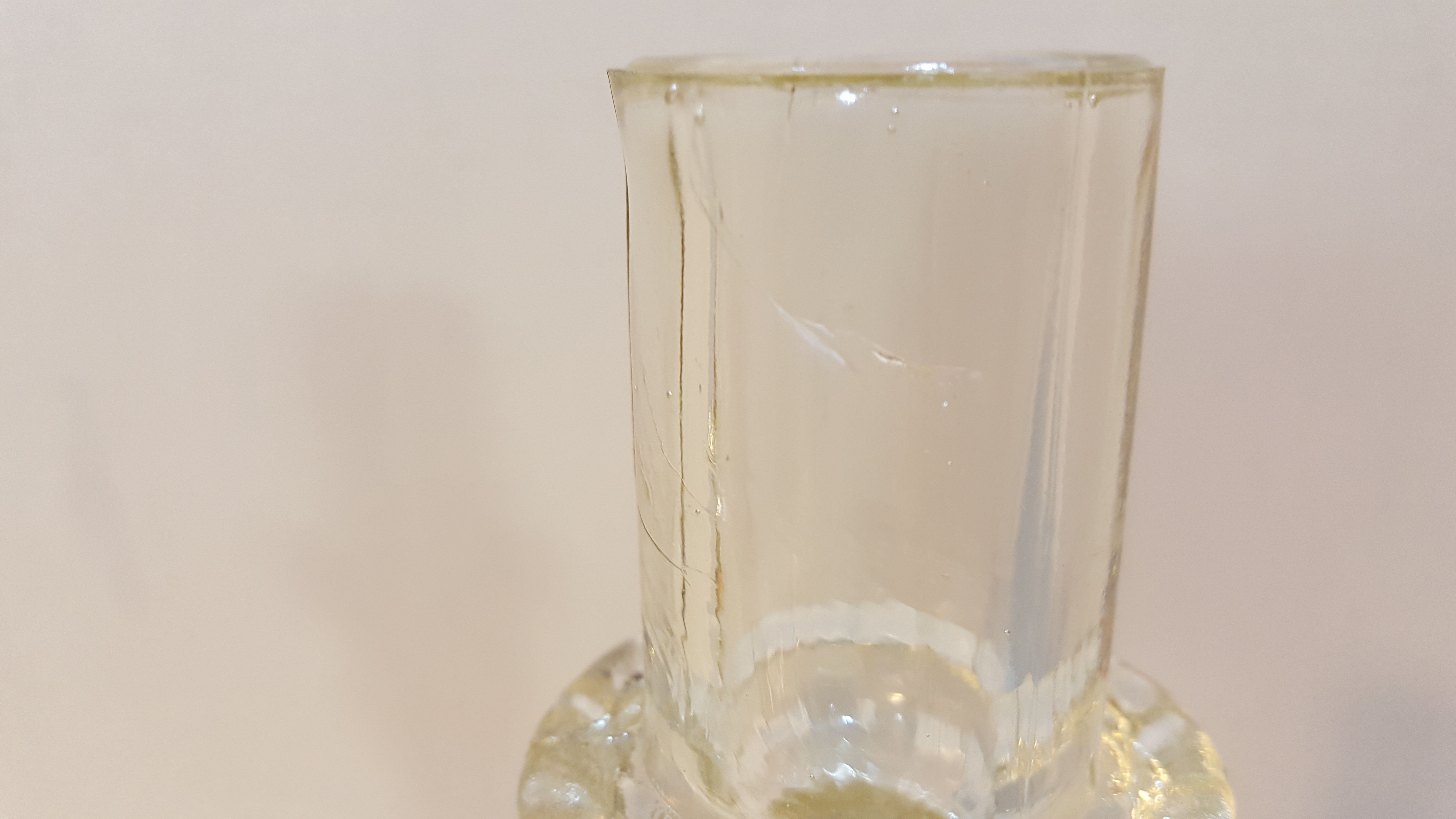 Hi Janet (I clearly have problems with J names! I'm so sorry!)
Just letting you know I got the glass candlesticks and photos.
Apologies for the delay in responding, I've been indulging in a longer than usual break over the Christmas, but feel much the better for it.

Be back as soon as I can.
Happy New Year!
Robert.

Customer reply replied 3 years ago
No hurry on this. Enjoy the rest of the year. Happy New Year to you.

These are very nice! Almost certainly Bohemian glass, but sadly unappreciated or known about sufficiently by collectors to be worth the bother and expense of restoring them to their original glory, unless you're going to keep them. They could be quite early, as old as last quarter 1800s, but these mantel luster bases, or candlesticks with removable bobeches (pierced to attach luster drops & prisms) went on being made well into first half of the 20th century, so there's really no good way of dating them.

Glass aficionodos don't seem to agree on the exact maker (as is almost always the case with Bohemian glass). Even though the yellow is pale, I would describe this as "vaseline glass" or even "uranium glass". My guess is they were made by Stolzle (almost always unmarked) or Walther & Sohne.

The 'chunky' nature of the molding is very typical of Stolzle. The company was founded in 1805 in Barnbach (then Austria) by Karl Smola and they produced some wonderful, unique shapes and styles in vaseline glass/uranium glass all through the late 1800s and early 1900s.

The originals would have had similarly colored faceted glass drops and prisms and fitted at the top with a a hurricane shade/votive holder that looked like this often with a deeper green/yellow hue of uranium glass.

I am sure yours one would glow green under UV light (a black light). Do you have one? If it glows, you can then definitely call it "uranium glass" a name used interchangeably with "vaseline glass".

The use of uranium (which causes the glass to fluoresce in black light/UV) in glass making was widespread up until World War II. In Europe, all the uranium ore came from one source near the town of Jáchymov high in the border mountains between Germany & the Czech Republic. This ore was even used to create radon spas (can you imagine!) in the area in Victorian times, particularly at Karlsbad which became world famous.

The quantity of radioactive material in uranium/vaseline glass is minute, I hasten to add, far less than the amount one would get from a watch with an old fashioned radon luminous dial. Ironically, the UV light you use to detect it with is probably more dangerous from a cancer-causing point of view than the tiny amounts of radioactivity coming from the uranium (which are less than typical background radiation).

Verified
Robert S. and 87 other Antiques Specialists are ready to help you
Ask your own question now
Customer reply replied 3 years ago
I had no idea these could be uranium glass. Finally found my little black light and they do have a faint yellow color. For the life of me I can't remember where or when I acquired them. Should go through the boxes more often. :-) I guess I will keep them for awhile and get some prisms.
Thank you so much for your usual detailed description. It has been a pleasure as always.
Happy New Year! J

That's great that you can get them to glow. It works best if you can create total darkness in a closet, say, before you turn on the black light.

Happy New Year to you too ! I hope 2018 brings you much prosperity, health and happiness!

Diana F.
Appraiser
Bachelor's Degree
9,695 satisfied customers
Show more
Disclaimer: Information in questions answers, and Show More
Disclaimer: Information in questions, answers, and other posts on this site ("Posts") comes from individual users, not JustAnswer; JustAnswer is not responsible for Posts. Posts are for general information, are not intended to substitute for informed professional advice (medical, legal, veterinary, financial, etc.), or to establish a professional-client relationship. The site and services are provided "as is" with no warranty or representations by JustAnswer regarding the qualifications of Experts. To see what credentials have been verified by a third-party service, please click on the "Verified" symbol in some Experts' profiles. JustAnswer is not intended or designed for EMERGENCY questions which should be directed immediately by telephone or in-person to qualified professionals.