It's, who you helped in August with my Grandfather's large…

Hello Robert, it's Rebecca, who...
Hello Robert, it's Rebecca, who you helped in August with my Grandfather's large floor vase from Japan. I have that vase in my possession now. Maybe we could decipher the Rakkan seal. I also have these two cookie jars that are very old, and I'm hoping you can help me.
Thanks, Rebecca
Show More
Show Less
Ask Your Own Antiques Question 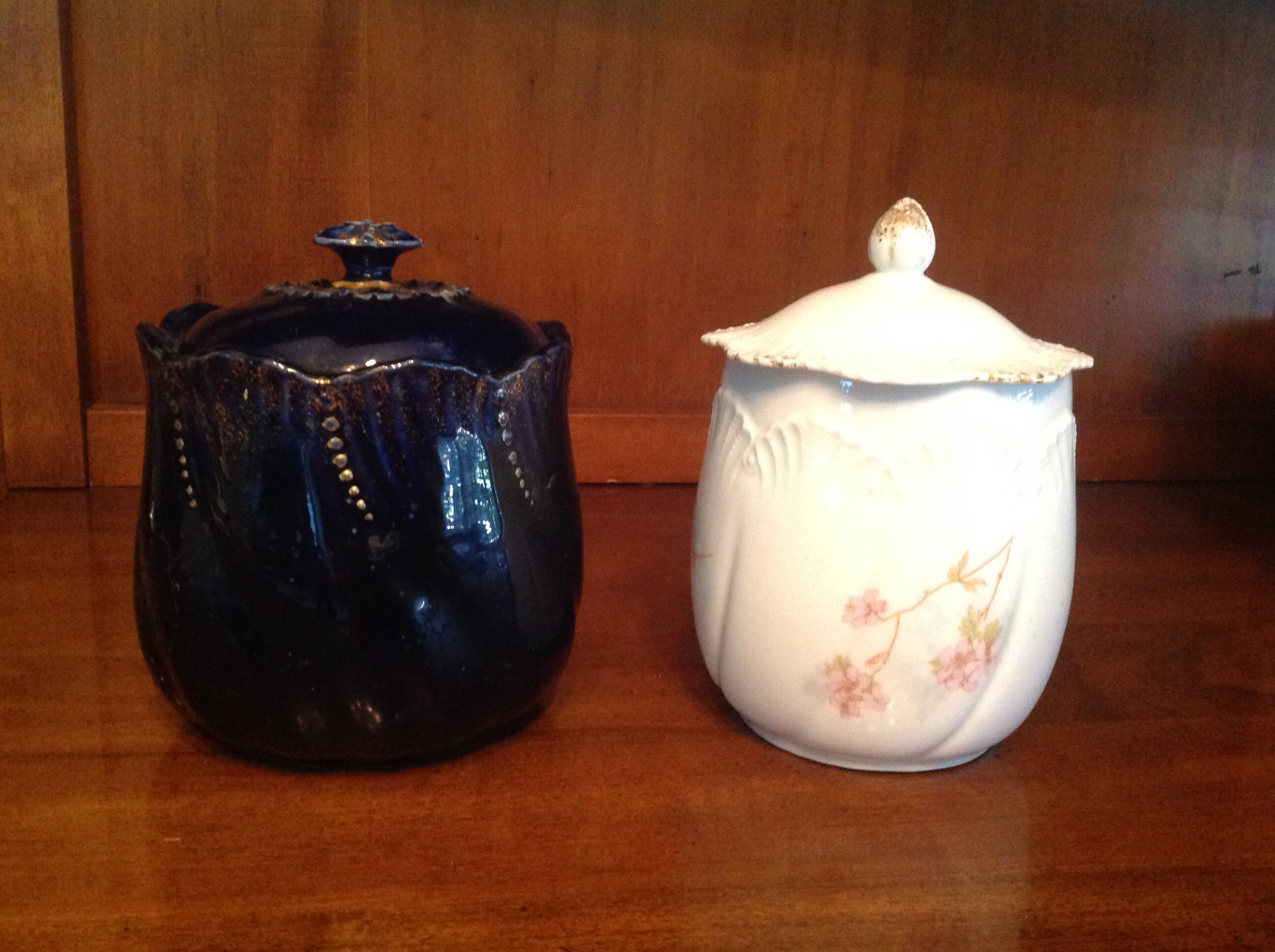 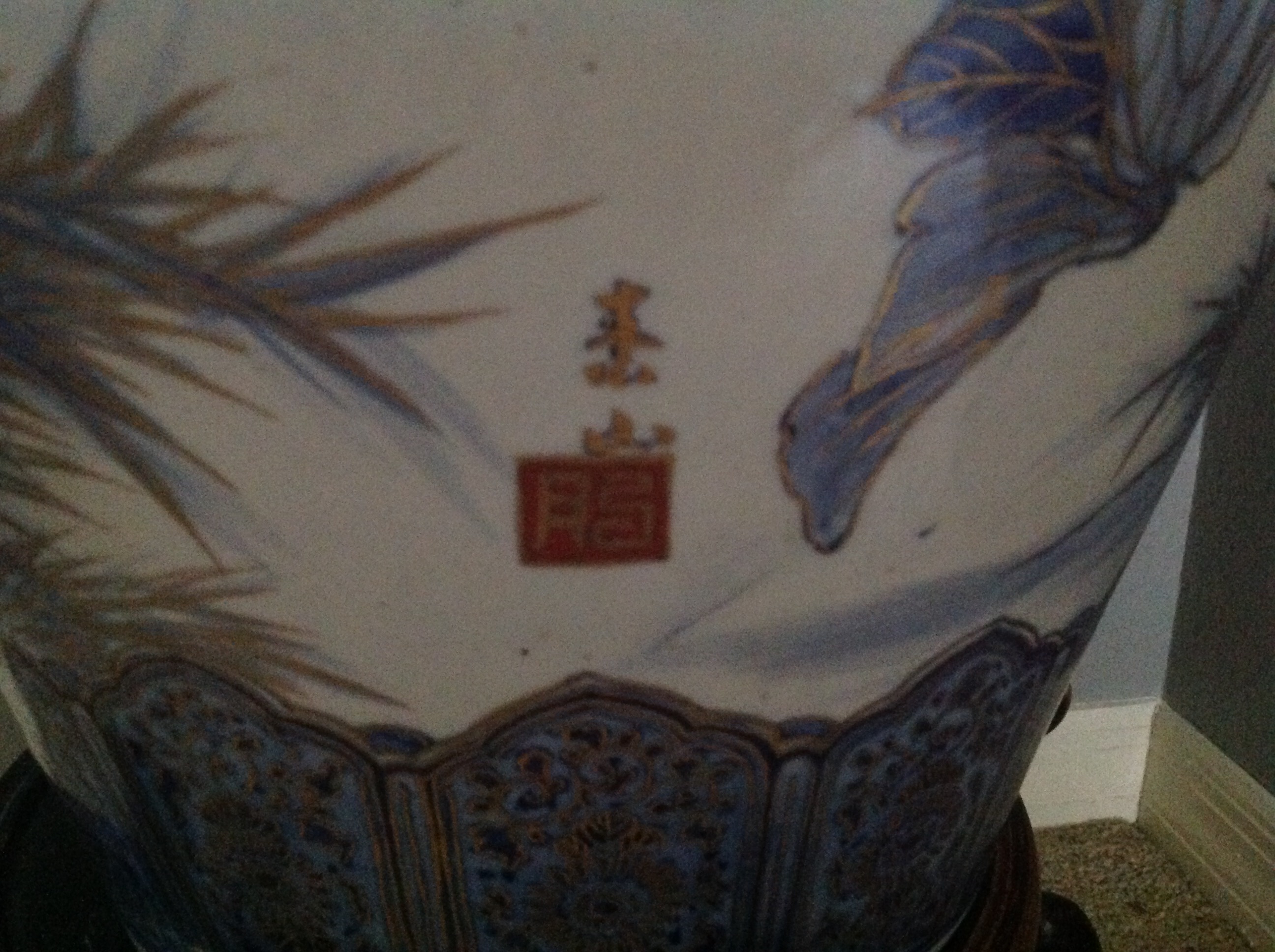 Answered in 1 hour by:
Antique Expert: Angela--Mod,  replied 3 years ago

Verified
Hello,
I am a moderator for this topic. I sent your requested Expert a message to follow up with you here, when they are back online. Thank you for your patience.
Best,
Angela
Senior Moderator

Hi Rebecca!
Good to hear from you! That's great you have your granddad's vase out of storage and so, yes! Let's have a go at that rakkan seal. Is there any way you can get me a sharper image of it? Not to worry if not, I can work with what you've sent. But if you can, try a shot using the strongest light source you can find or use flash.

Meanwhile, I'd be happy to help with the cookie jars. Could you attach a nice clear photo of their bottoms, whether marked or not.

Customer reply replied 3 years ago
I've attached the photos Robert. You can see there's a chip on the lid of one cookie jar. I'm not so worried about that; but I'm curious about it's age. The other cookie jar is in excellent (flawless) condition. The story is, they belonged to my great grandmother, and one is actually a generation older than the other------I just don't know which one.
There is one more old porcelain piece I forgot to photo. Can I send you a picture? 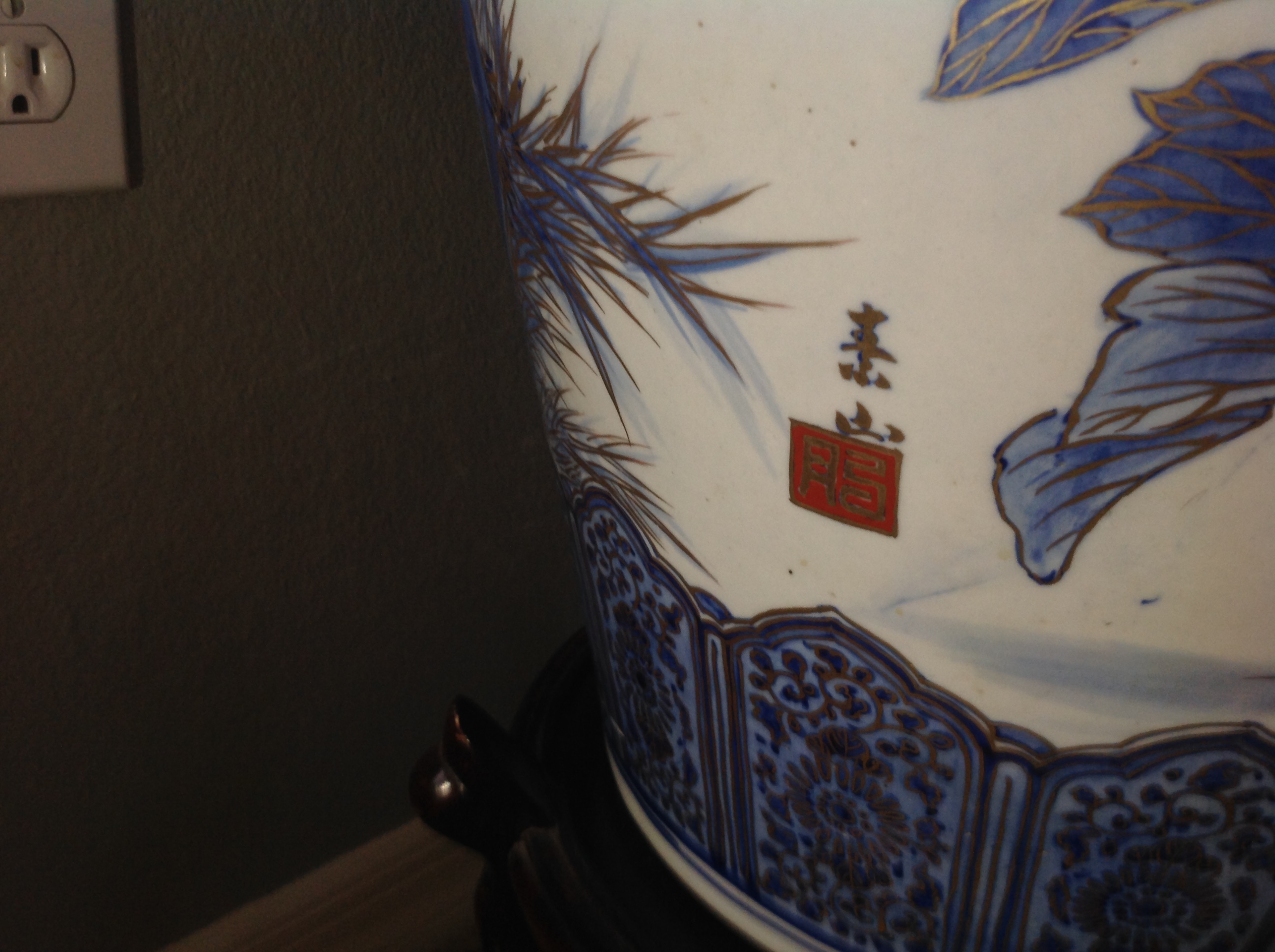 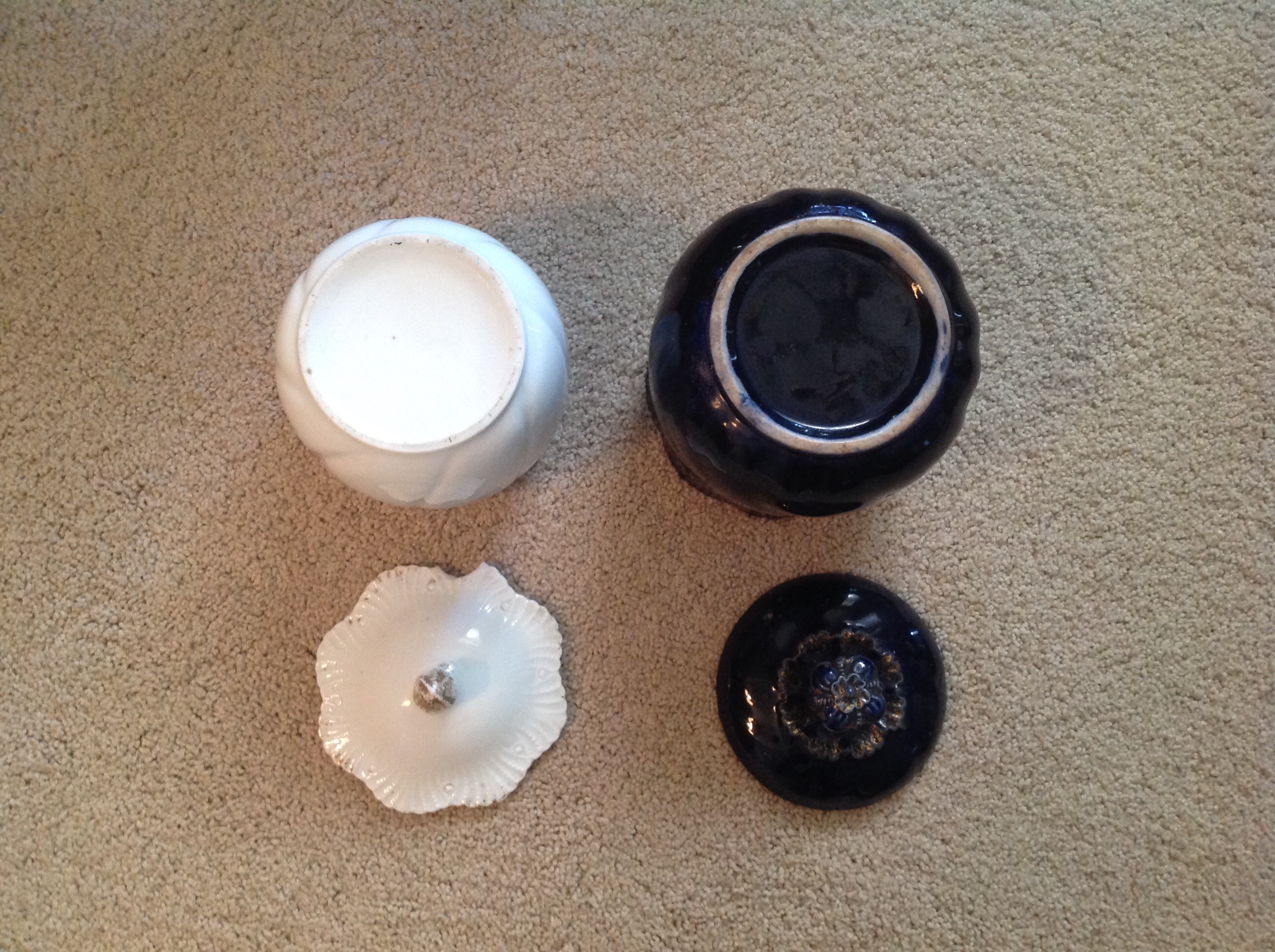 Sure. By all means add a photo of the last porcelain piece.

Meanwhile, those photos are great, that's all I need to see. I'll have an answer for you as soon as I can.

Customer reply replied 3 years ago
Here's the other piece......would it be considered a basket? 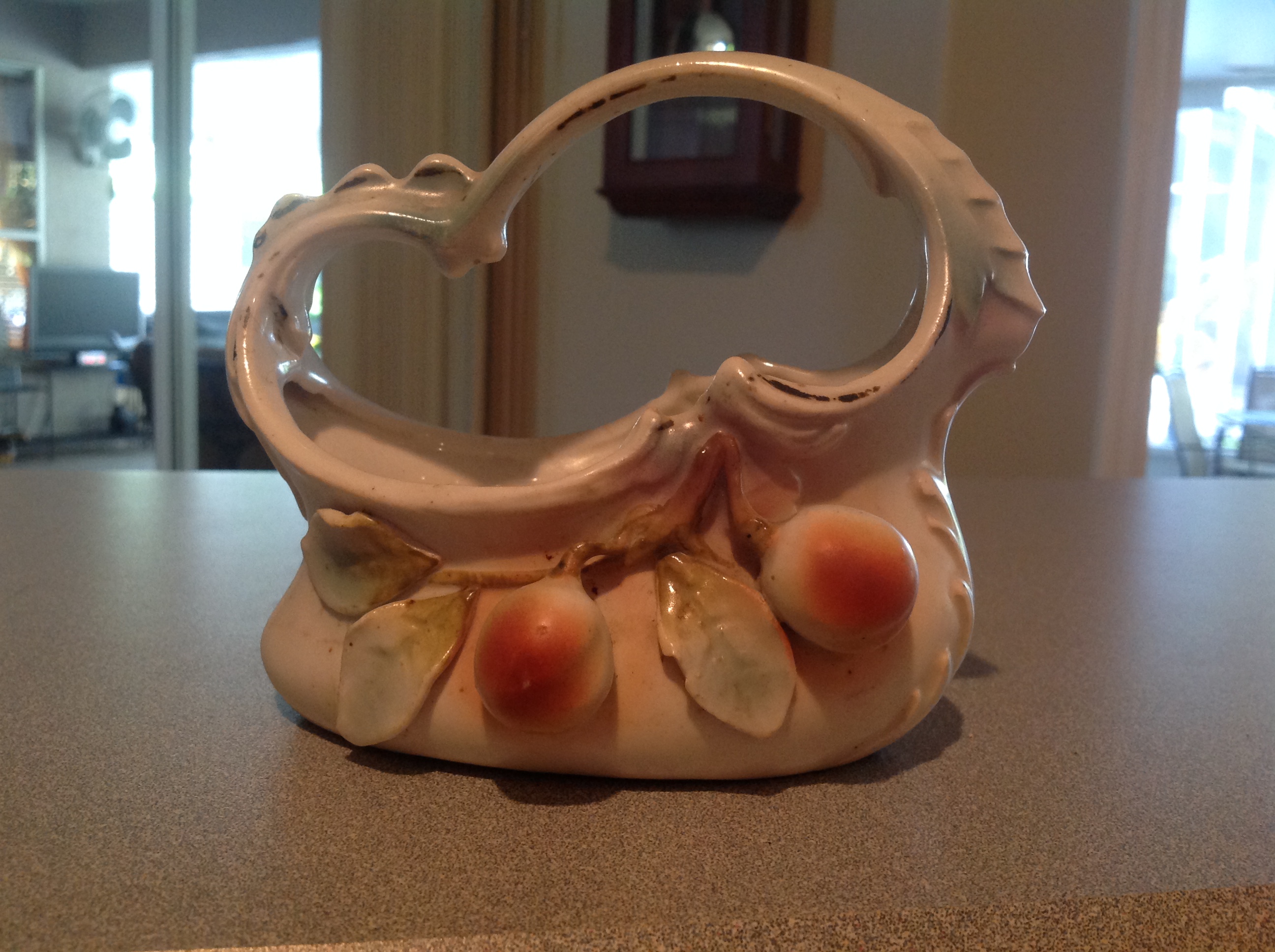 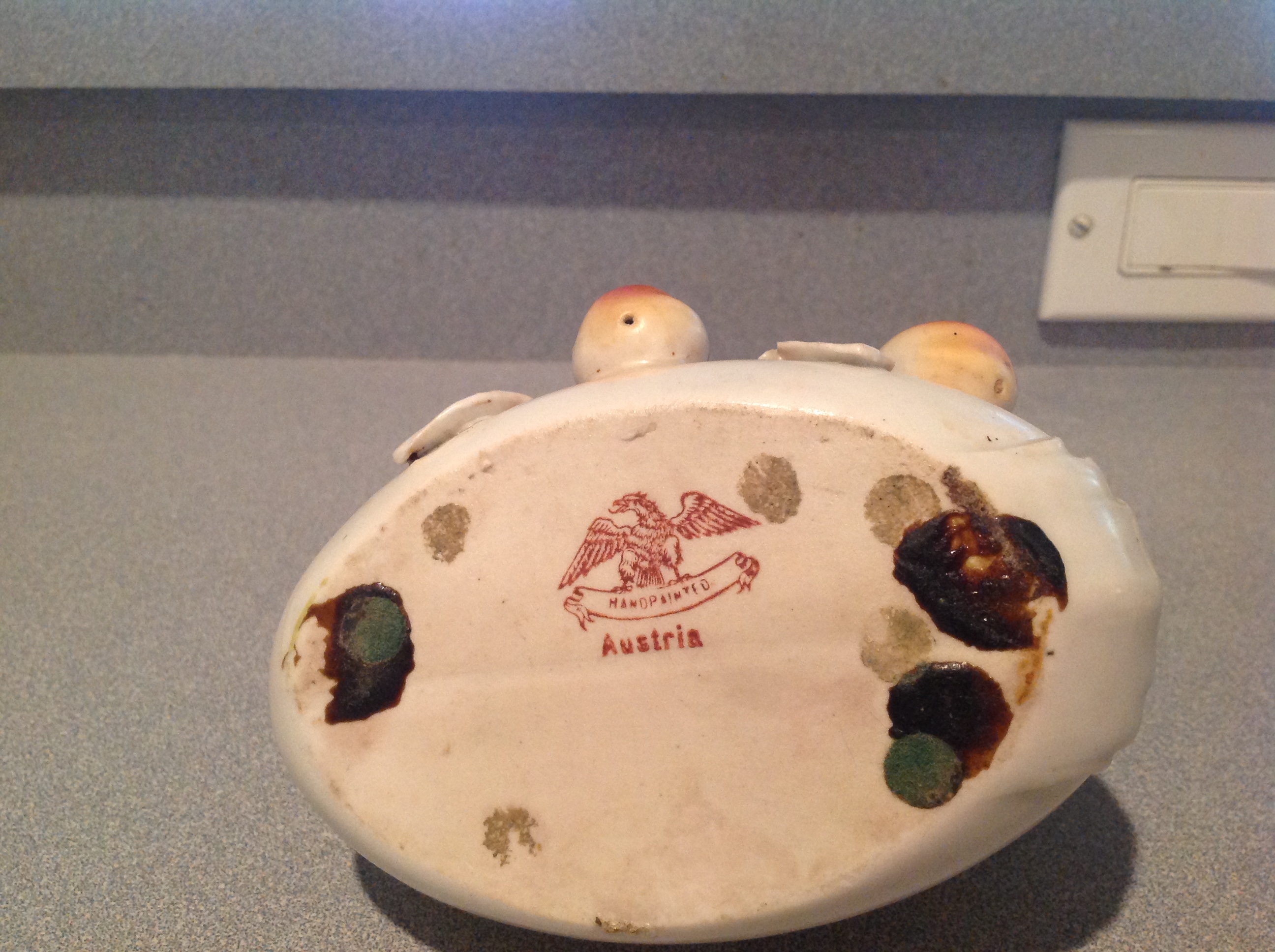 Thanks for the photos of the other piece. .

(1) Yes. I would call that a basket. The eagle mark on the bottom is one of those mystery marks that gets described in my references as "unattributed" at best to "Taiwan fake" at worst. No-one is quite sure where or when, but my suspicions from the way the raised relief fruit (pears?) are airbrushed is that it's 1950s at the oldest.

This piece is best be described as "vintage reproduction Bohemian-style Art Nouveau pottery", and sells on it's decorative appeal which, I have to say, is charming in a mid-20th century 'cheap and cheerful' way and would sell at auction or eBay in the $20- $30 range. Full retail/replacement/insurance value $50.

This is German porcelain from circa 1890 - 1920. The embossed shell form lobed shape is typical German rococo revival of the period with printed color decal floral decoration. Unfortunately the ding on the cover is going to affect value. Auction/eBay range: $25 - $35; Full retail/replacement/insurance value: $70.

Also German, and from the same period, early 1900s, called "Cobalt blue dip" porcelain (or Kobaltblau in German) possibly one of the Bavarian porcelain factories such as Tettau or Schumann who made a lot of blue dip porcelain.

Similar rococo revival style, with raised 'jeweling' and sponged gold, much of it rubbed, sadly.

Now I can see it, the red seal is not actually an individual artist's rakkan, it's a stylized abbreviation of the Hizen mark ((肥前) (as per the main mark). All it is, is the left character Hi (肥) referring to the Arita region as per my previous response. But this is a good sign as far as confirming the age as it typically appears only on Meiji period (1868-1912) pieces.

The artist mark above it reads:

But again, there's no listing of this particular name in my references, which is not unusual, so many from this late 19th century era are unrecorded.

It doesn't affect the value I gave you. This is an impressive example of Arita porcelain and made in, or near, one of the ancient Imari kilns that became so famous in the 1600s for producing the finest export porcelain in the world, better even than the Chinese Imperial kilns at Jingdezhen which in the Chinese political turmoil at the end of the Ming Dynasty were in a state of disarray.

"Late 19th century Japanese Mieji period, Ko-Imari revival, Arita-made porcelain" is what I would call yours. Retail/replacement/insurance value $3000 and roughly 30% - 40% of that at a good antique auction house having a specialist sale in the Asian arts.

Verified
Robert S. and 87 other Antiques Specialists are ready to help you
Ask your own question now
Customer reply replied 3 years ago
Morning Robert,
Thank you for the information and quick response! These items of mine are full of childhood memories and I intend to pass these along heirlooms along; and they now have a more complete history.
It impresses me that such mundane items as cookie jars were so fancy back in the day.....lol
The vase has a place of distinction in my home now, as it did in my Grandparents', and I'm thrilled to know everything about it!!
Thank you,
Rebecca

I'm so glad to have helped shed some light on these and even more glad you're going to keep them, I hope you get years of enjoyment from them. Thanks so much for asking me about them.

Robert S.
Antiques and Collectibles Researcher
BA
7,063 satisfied customers
A quite large chinese vase with gold fish inside. , It
It is quite large with figures, I'm told, from chinese religious and philosophical traditions portrayed around it. there is also a chinese seal on the bottom and a Made In China insignia. … read more