I have several older Chinese items that I believe have some…

Hi. I have several older Chinese items that I believe have some value. I am trying to determine what level of insurance I need to carry to protect them. What is the best way to get them appraised?

Are you a bot?

I'd be happy to help with your Chinese items.

We appraisers prefer to do just one item per Q. or two if they are related, as we are paid by JustAnswrs by the question (at no extra cost to you) so if you'd like to go ahead and attach photos of a couple of items at a time, I'll give them a full appraisal and an insurance or replacement valuation.

Let me also have dimensions where appropriate and close-ups of any detail you'd like me to see.

Many thanks and wait to hear,
Robert.

Customer reply replied 3 years ago
Old bowl. I am told that its value lies in that it is as large as it is, and as old. There simply aren't many others this size, this age. 16 inches across the lip. 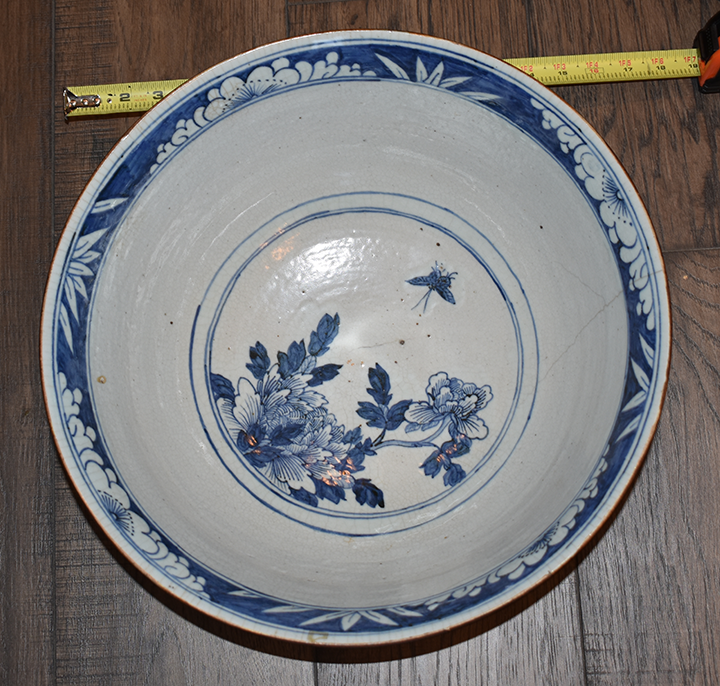 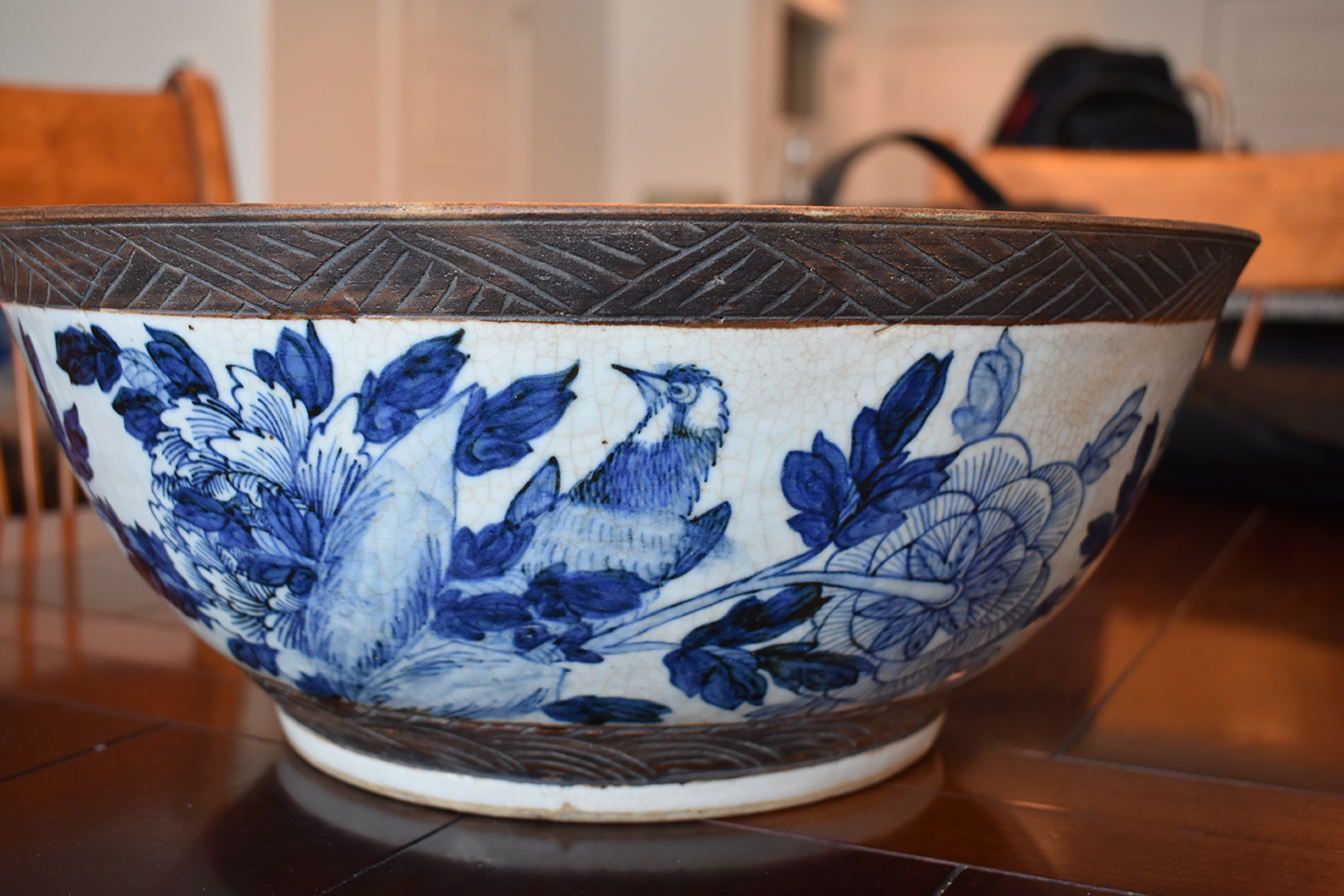 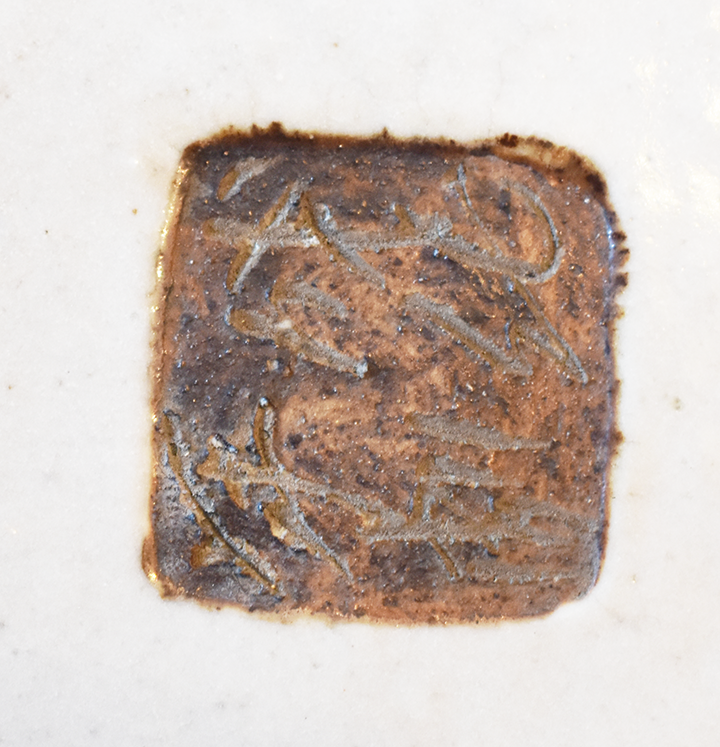 Bowl-stamp.pngBowl-st...png
Customer reply replied 3 years ago
Not sure if this is where I add my second item or not. Ceremonial Collar. This was purchased in Beijing in 1994. My father spoke Mandarin and saw its worth and negotiated hard for it. The collar measures 26 inches across. 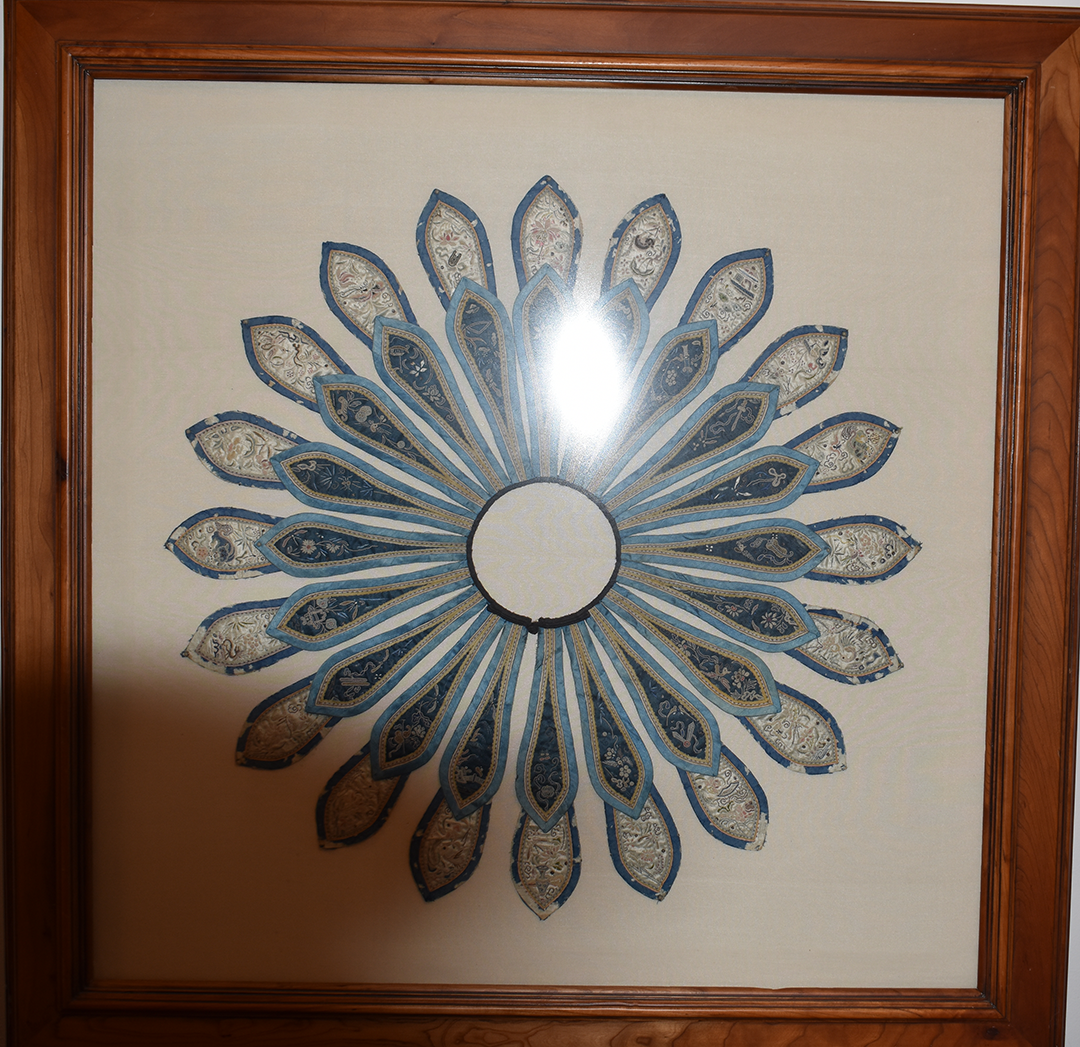 epulets2.pngepulets2.png
Customer reply replied 3 years ago
Carved chest. Purchased by my father in HK in 1959. 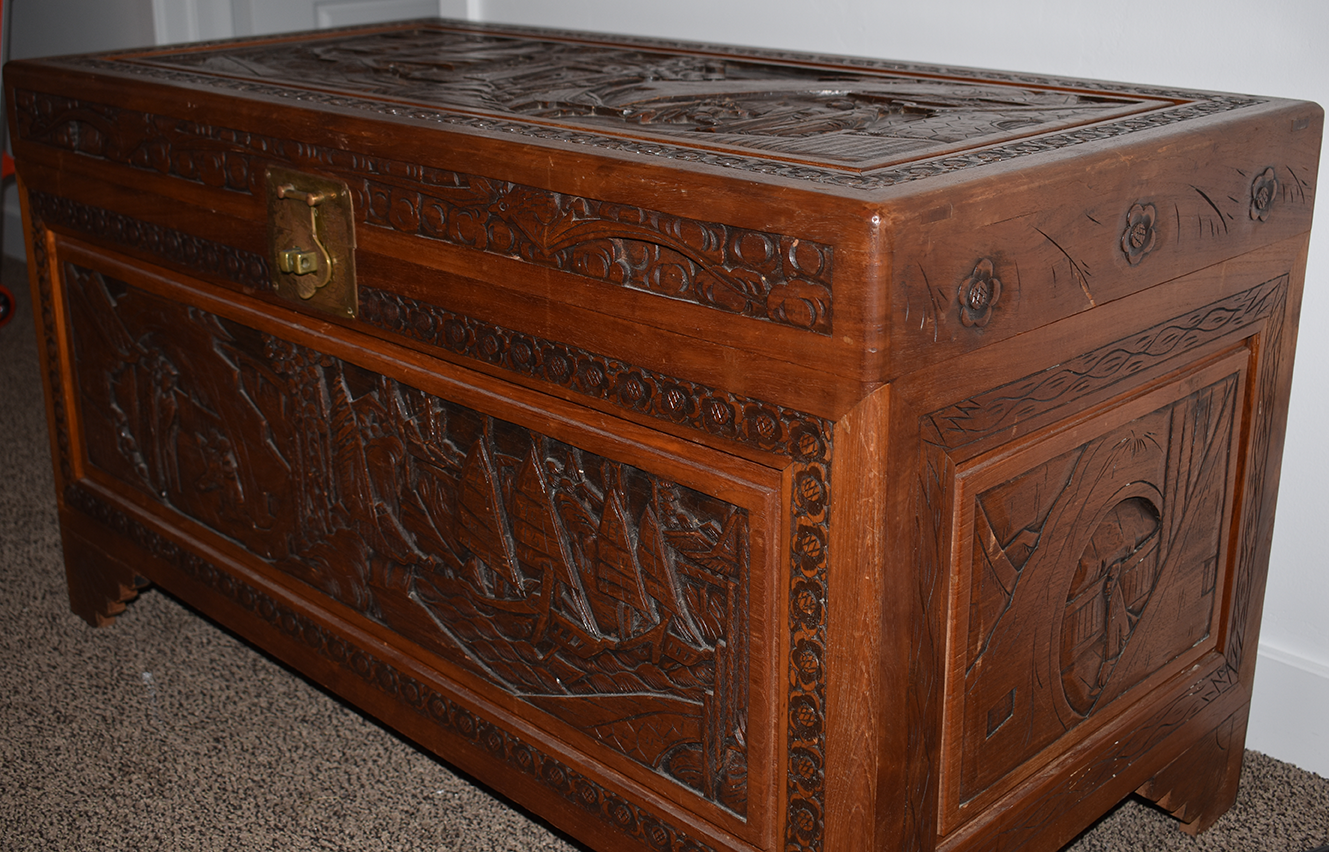 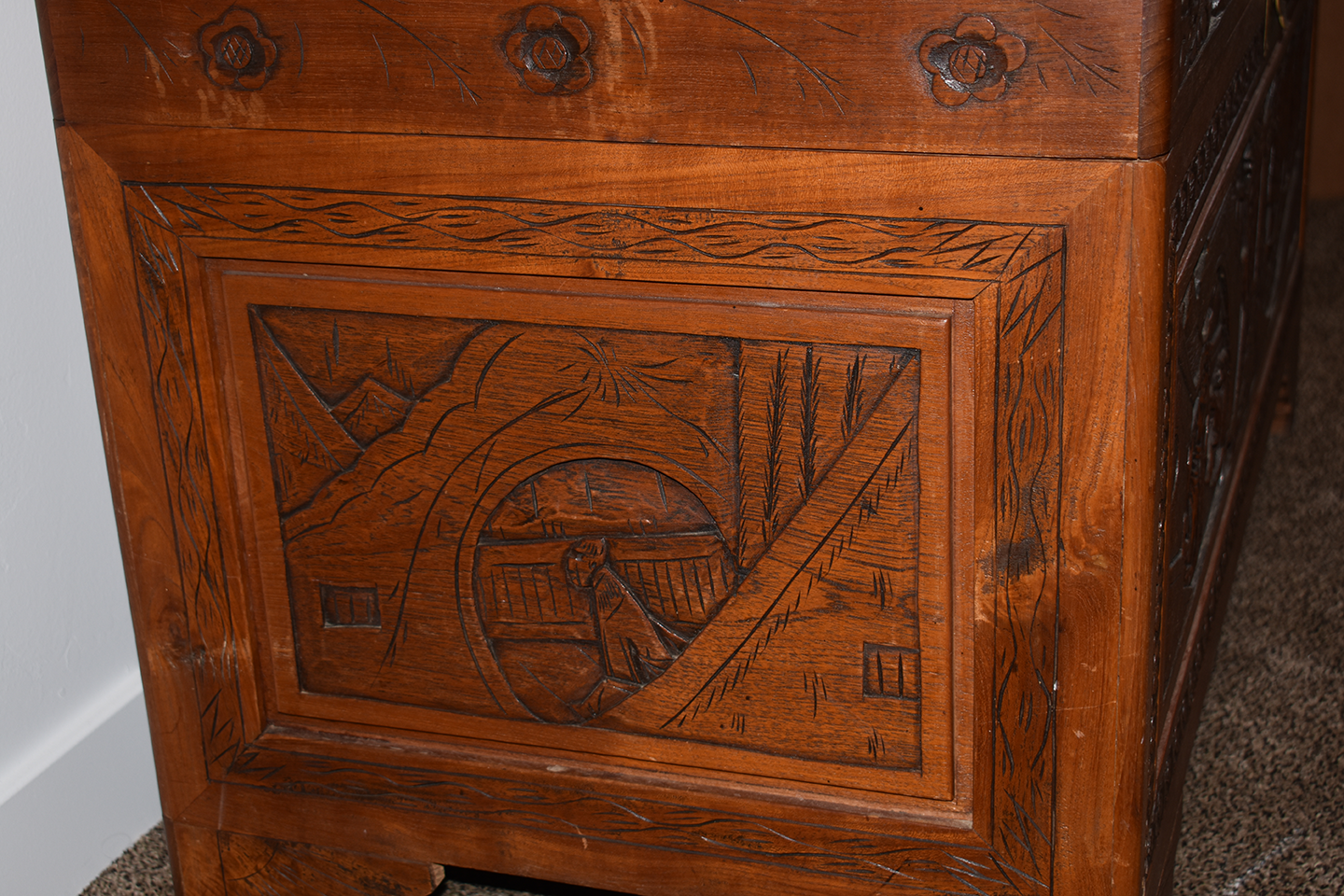 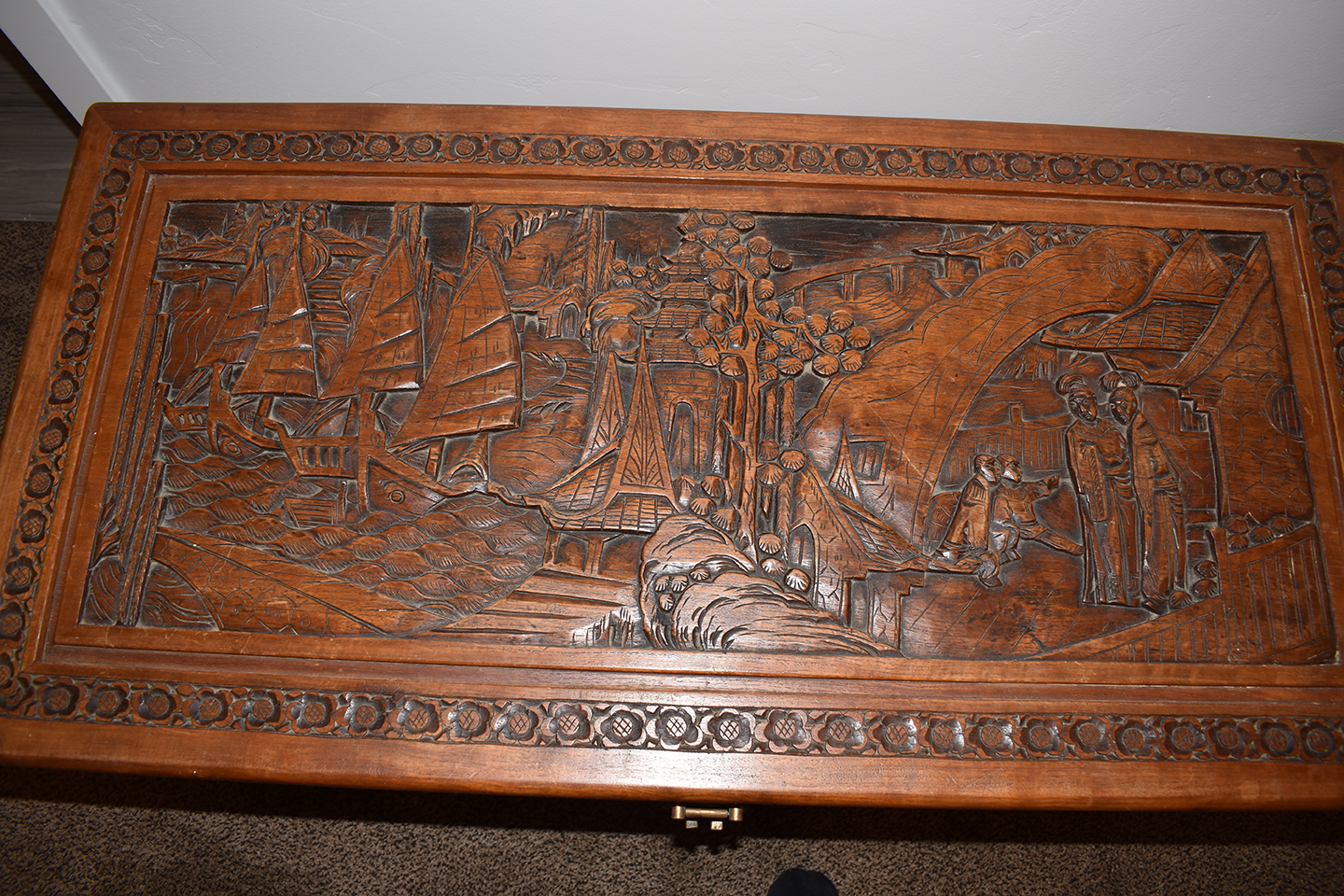 Chest-Top.pngChest-Top.png
Customer reply replied 3 years ago
Silk Illustration. It is tall at 46 inches by 26. We always valled it the 100 birds. 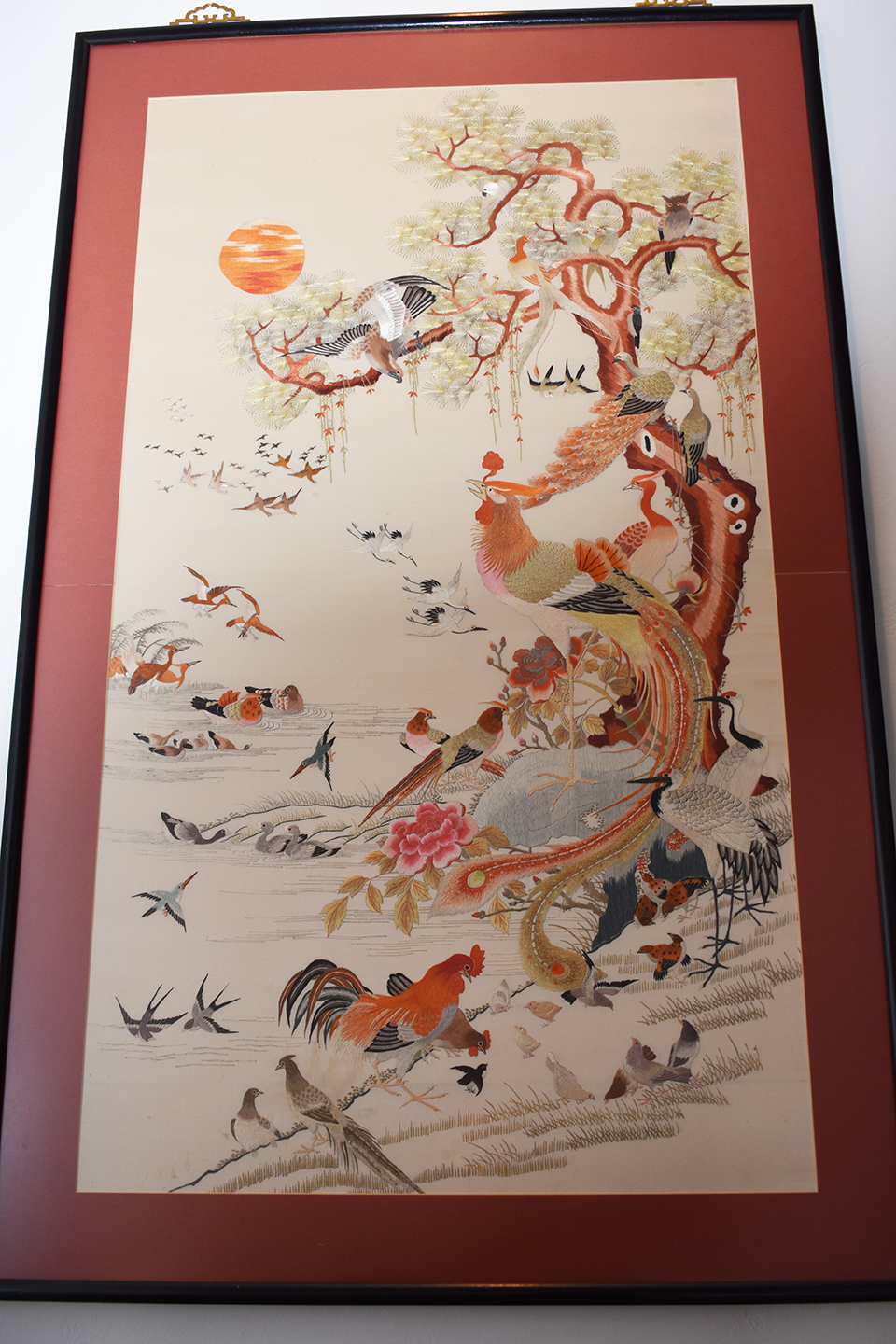 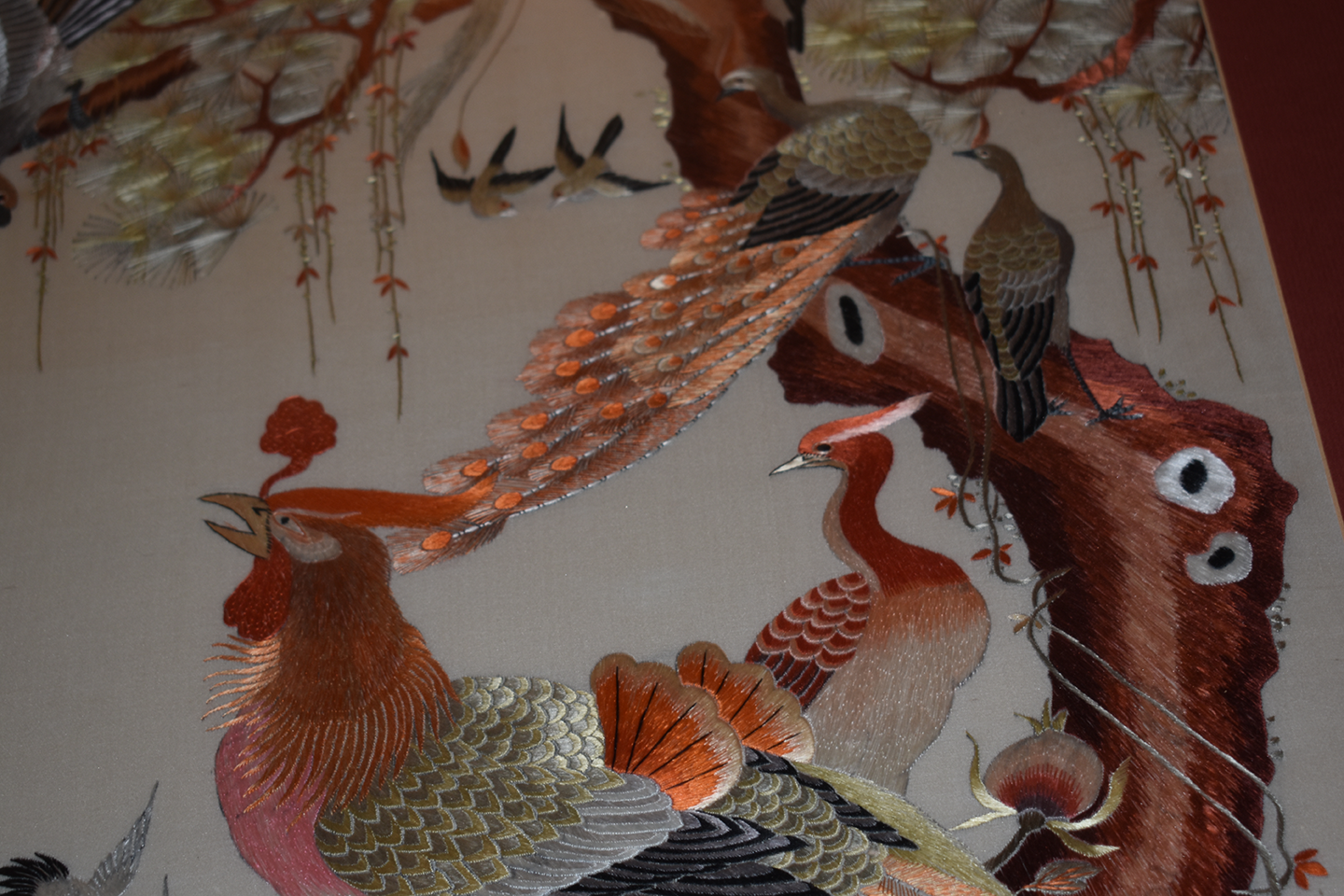 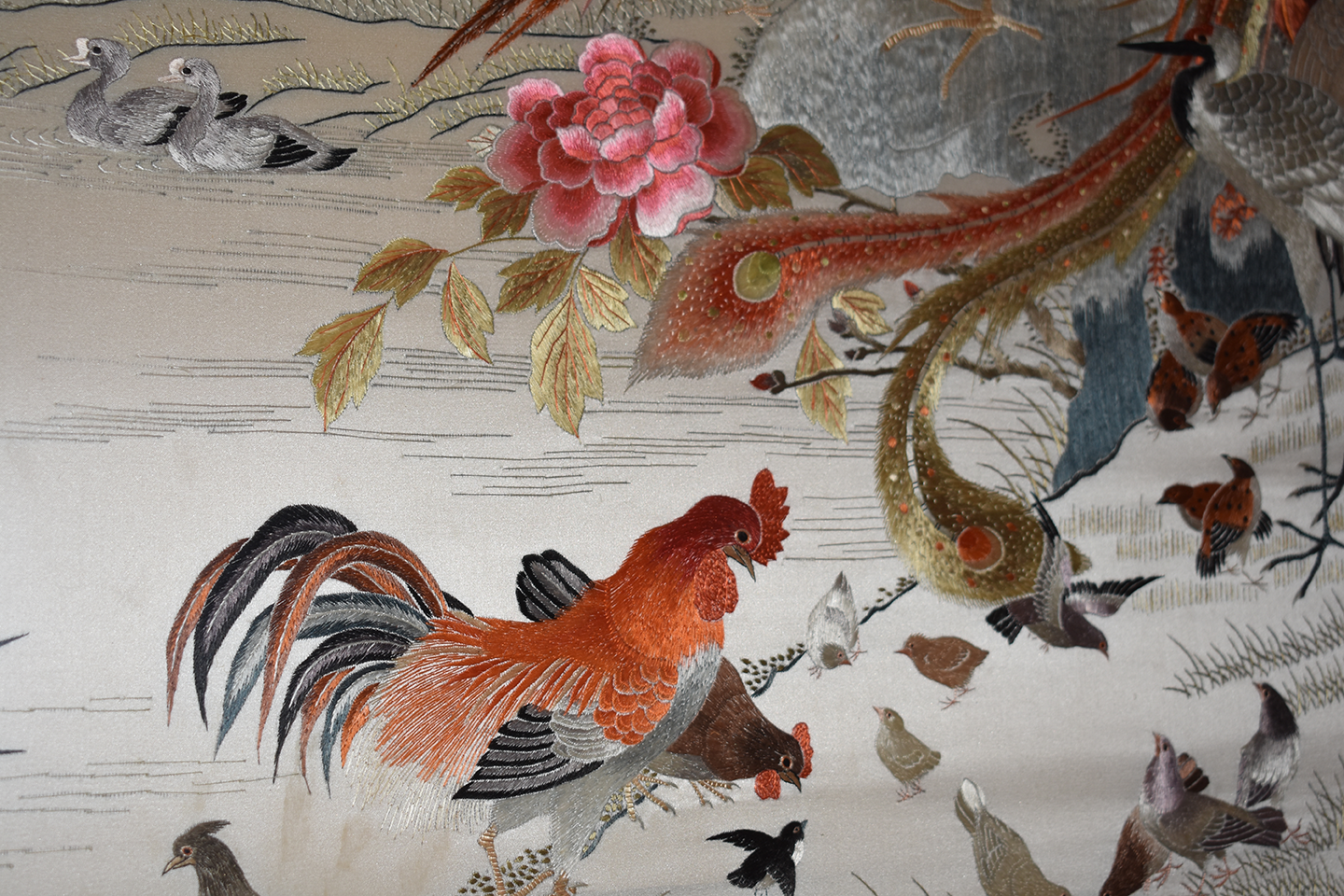 Thanks for all the photos,

Let me do the bowl and the ceremonial regalia first.

Then the best way to proceed is to open a new question for the chest and I'll do that there. No need to add the photos a second time, I'll transfer them from here.

Make sure, when you start a new Q. you put "For Robert S. only in the subject line and it will be sure to get to me.

Meanwhile, could you very kindly add one more photo of the bottom of the bowl showing the entire footrim, if you can. Seeing the exposed porcelain of the rim helps confirm age and origin, etc.

No problem if not, I'll work with the images you've already attached, as I can see very clearly what this bowl is. 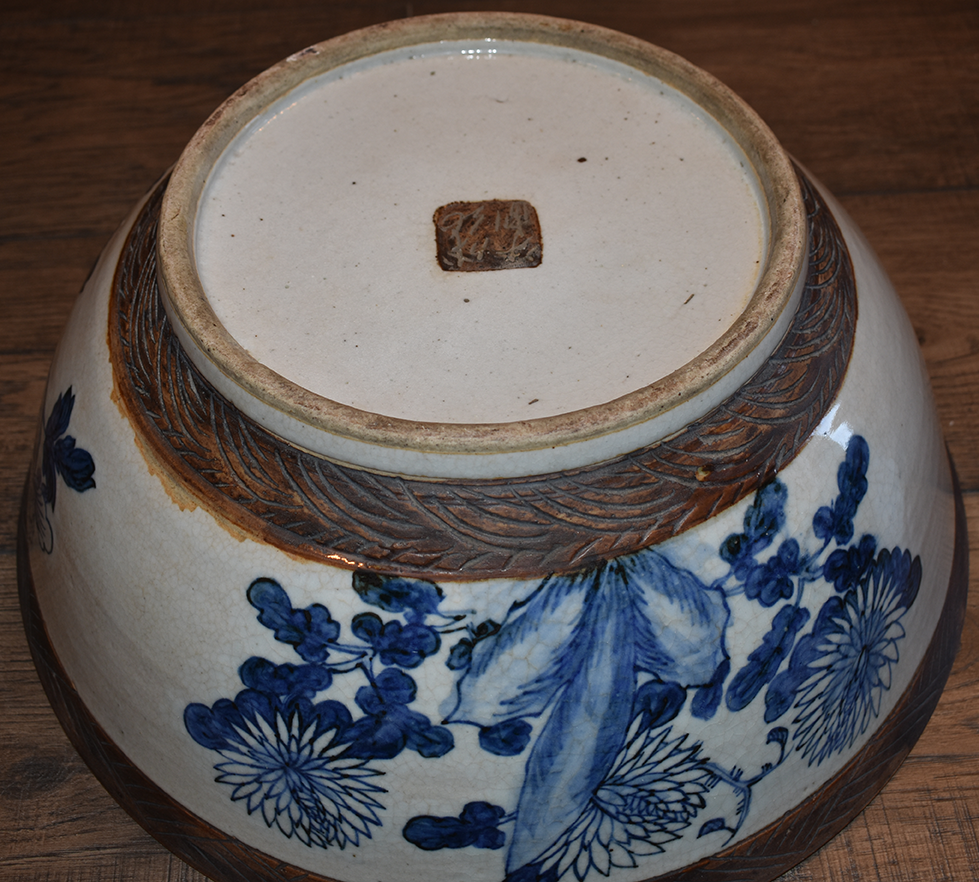 Perfect thanks! Just what I needed to see. That's all I need, leave this with me and I'll have a full answer for you as soon as possible.

This a beautiful piece of porcelain -it's an example of what's called "Brown incised Chenghua crackle glaze ware" -a bit of a mouthful, I know, but it's because they are often marked like this, with an apocryphal Ming Dynasty seal mark from the Chenghua reign,

on the bottom etched into a brown square, exactly as on yours (you have to rotate your photo ninety degrees clockwise like this, to see the characters the right way up).

Chenghua was a famous Ming emperor who reigned from 1464 to 1487, but nothing quite like this was ever made at that time. This is a 'new' decoration that came into being in the mid-1800s, but most examples are more recent. I'd say yours is most likely 1890 - 1920s.

The "crackle glaze" part of the name comes from the crazing which is deliberately created during manufacture by accelerating the cooling period after firing so that differential thermal expansion between the clay body and the glaze causes the glaze to crack.

One often also sees these brown, bisque bands (as on yours) incise decorated and smeared with a matte glaze. The decoration is a traditional flower and birds composition in underglaze blue, and an internal border of stylized plum blossom, all expertly done by hand.

This brown incised Chenghua crackle glaze ware is popular with collectors at the moment and bowls of this size are a rarity. The hairline crack visible on the interior is going to detract slightly, but in spite of that this bowl has a full replacement or insurance value of $1,250.

This is crewel, chain-stitched and 'secret' stitched silk needlework in the manner of traditional Suzhou embroidery, late Qing in date, circa mid to late 1800s.

It's actually a bride's wedding collar shaped as a double lappet of petals as a stylized lotus blossom. The lotus is a powerful symbol of spiritual purity in the Asian Buddhist tradition.

It would have an additional ring of brocade on top, and sometimes, underneath it, a 'cloud collar' as in this assemblage.

As for value, antique Chinese fabrics are sought after. Your collection of epaulettes and collar would have a combined replacement/insurance value (given that they have some condition issues) of $750 for all.

Verified
Robert S. and 87 other Antiques Specialists are ready to help you
Ask your own question now
Customer reply replied 3 years ago
Fantastic stuff. Thank you!

You're welcome, glad to have helped!

rusufdavi
21,293 satisfied customers
I have some things I would like to get appraised. I have
2 are from Peru 1950's pottery and one vase from peru also 1950 2 hummels and a chinese vase… read more