Hello Robert, Im not sure if...
Hello Robert,
Im not sure if I already asked you about these 2 vases got hem as a pair, they have some ware and makers mark hard to see on one they both stand at 17cm high and 30cm around the belly and the one with the clearer mark is 273gms in weight and the other 292gms approx. They were sold to me as matching set but I don't think they're a matching pair as both vases look different in size and their bases are slightly diff, but both have a cream base they also have loss of the gold decor from ware and age I assume.
cheers
Billie
Show More
Show Less
Ask Your Own Antiques Question 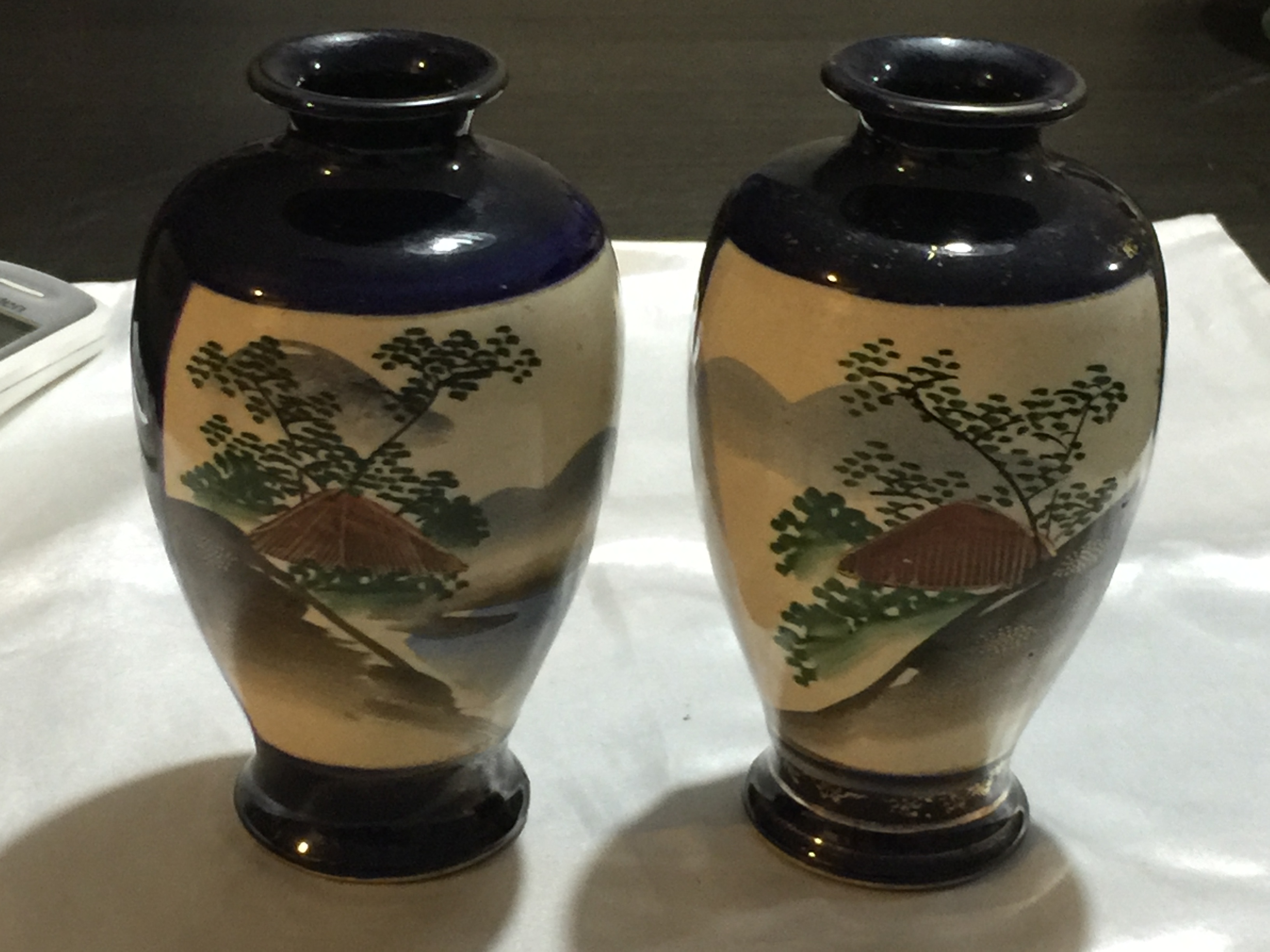 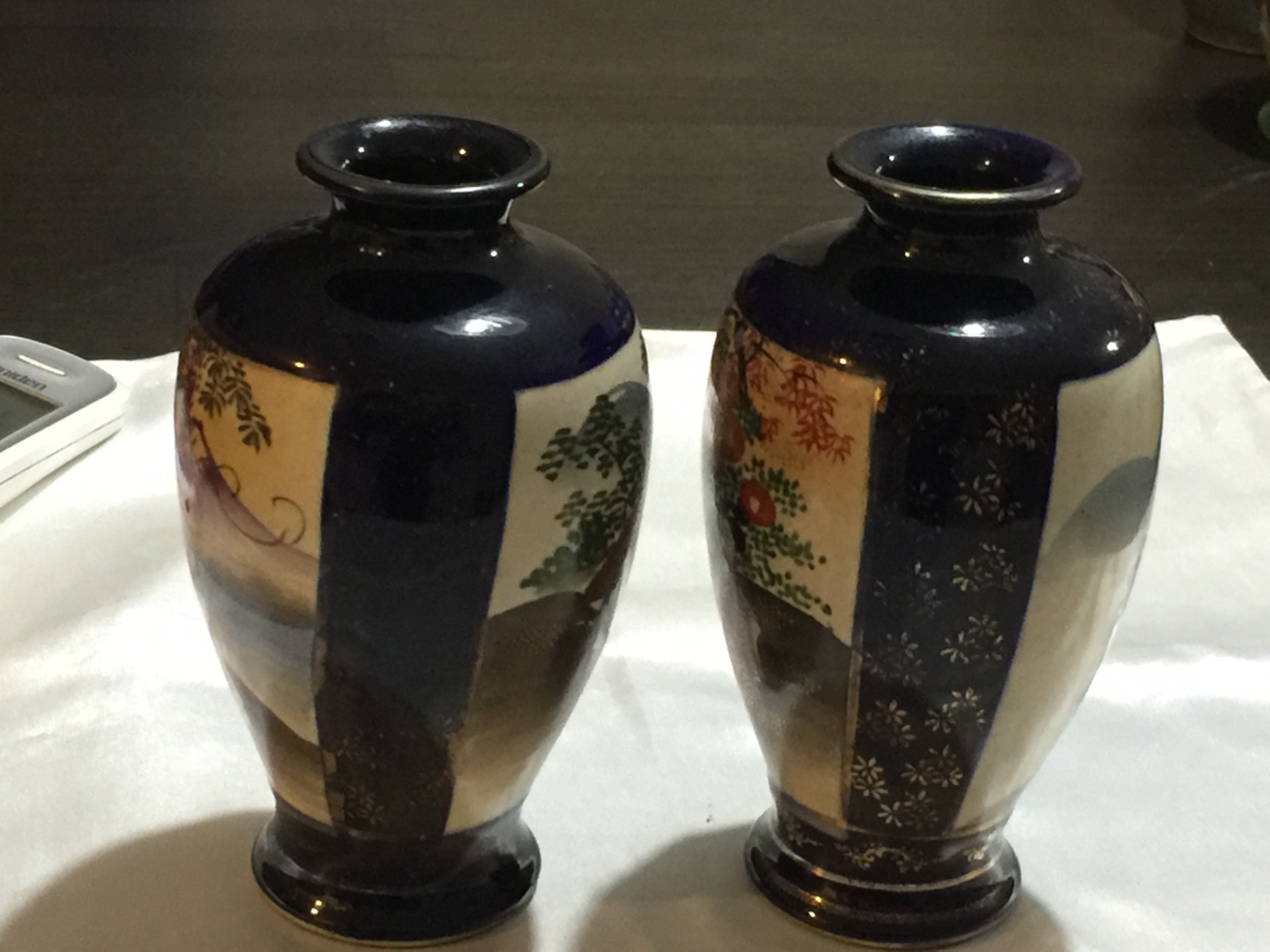 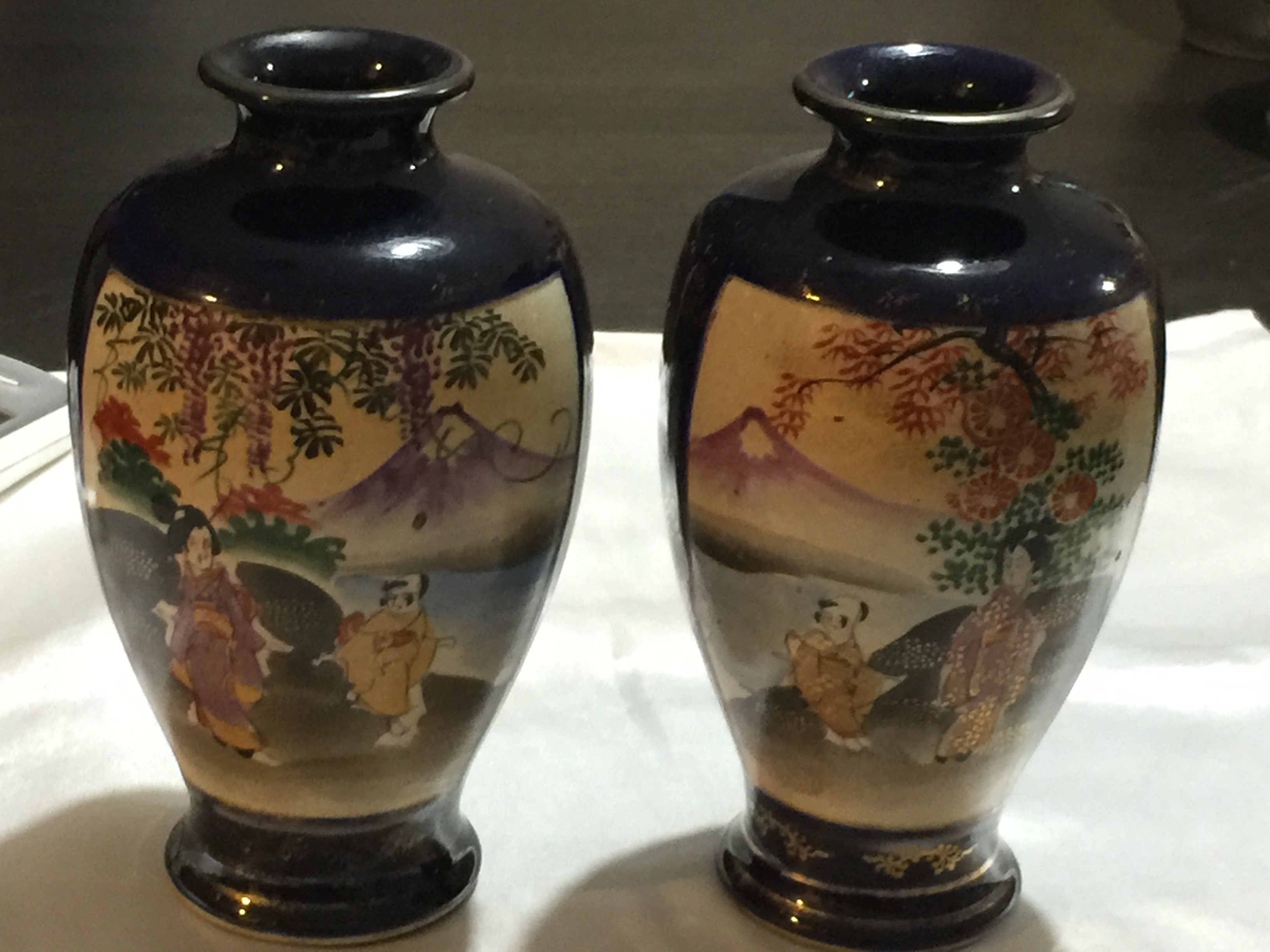 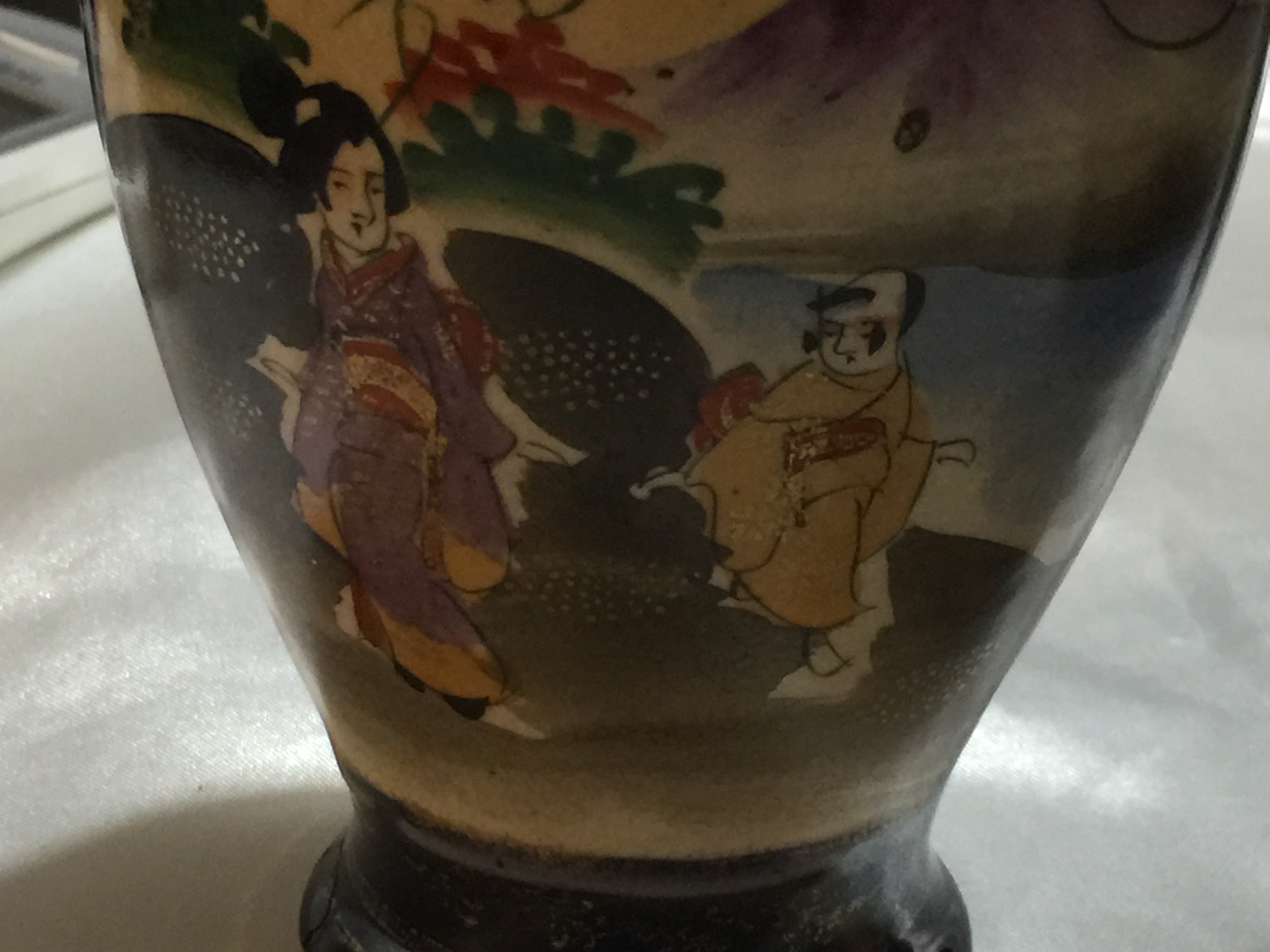 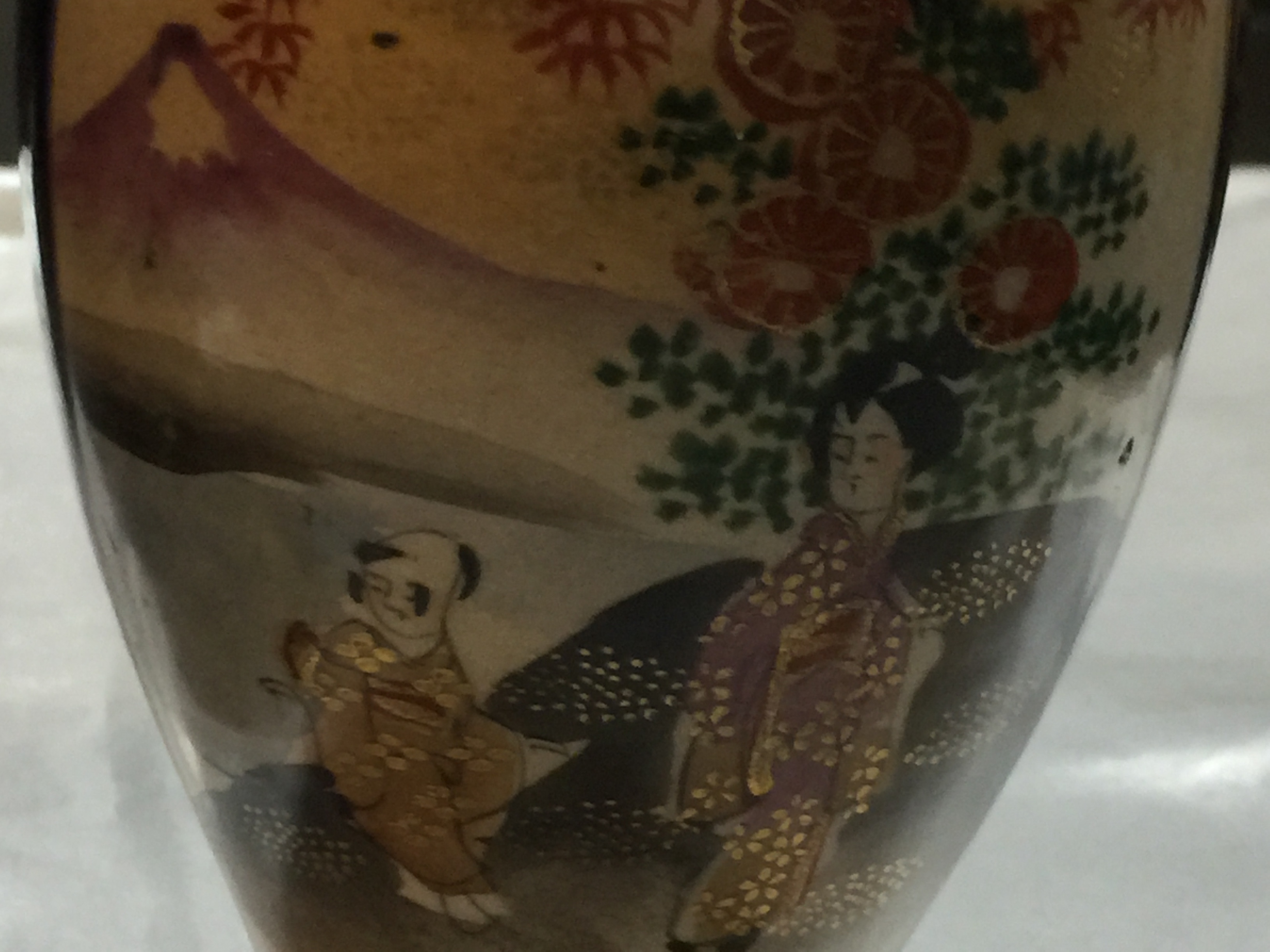 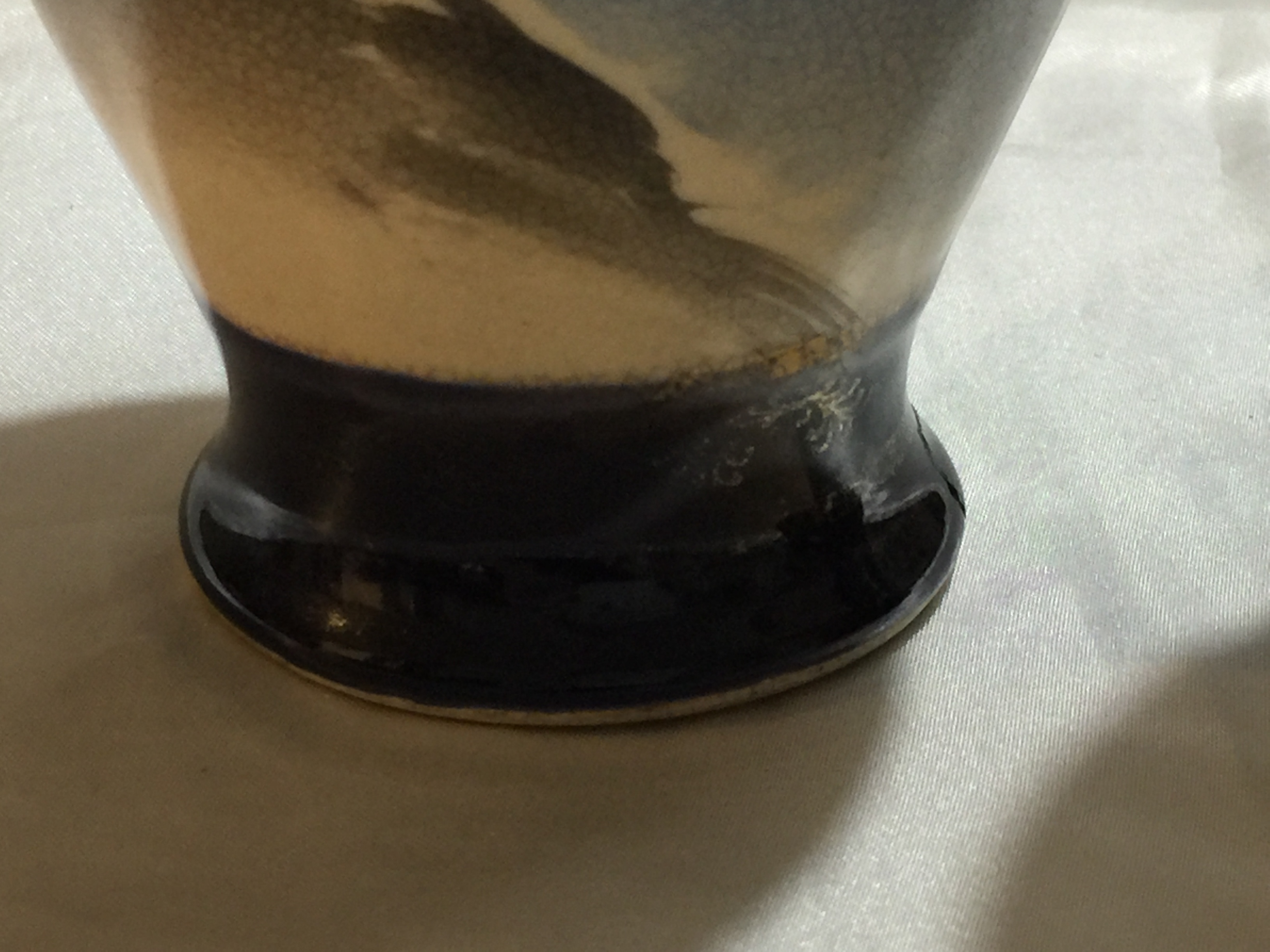 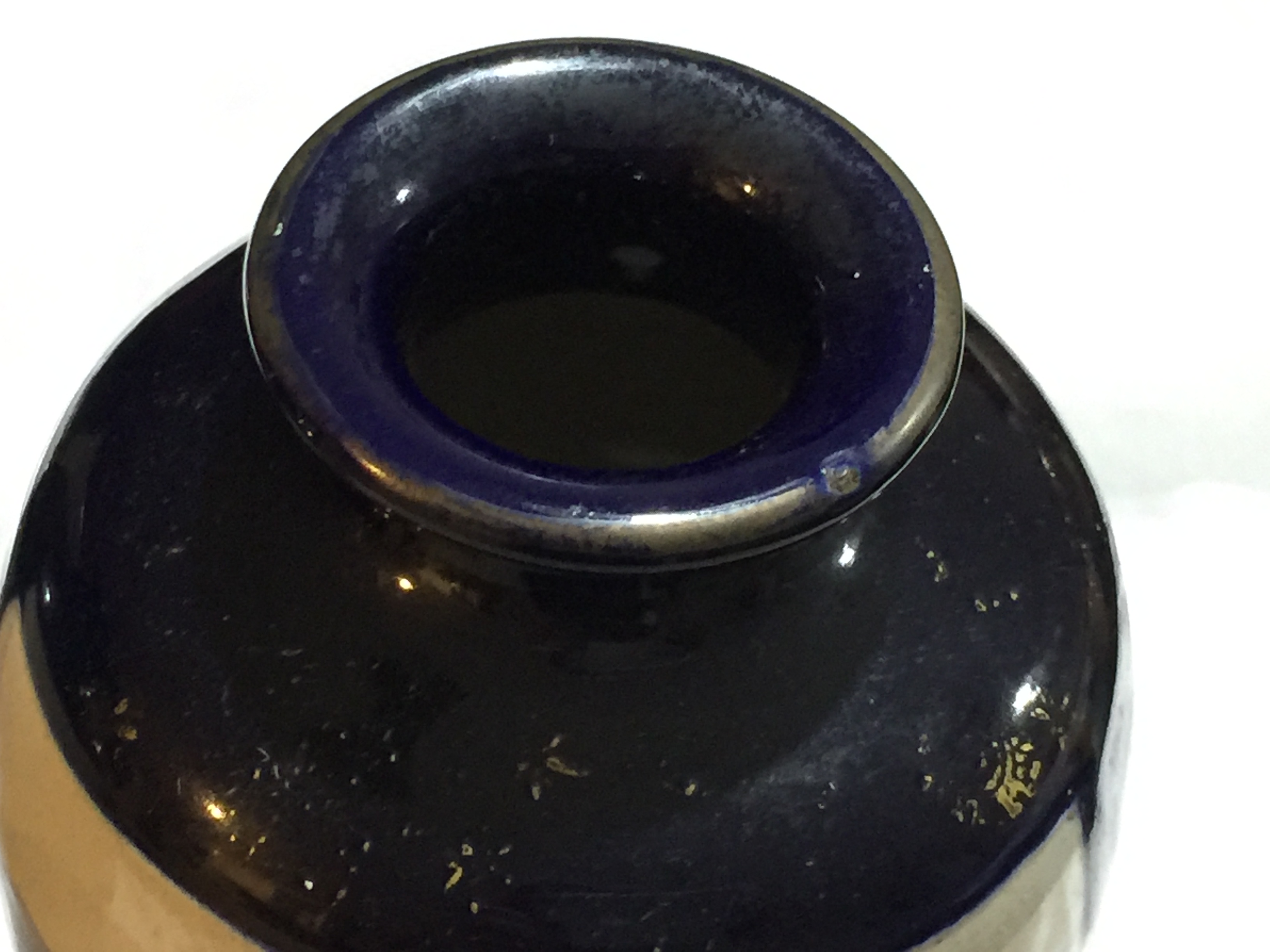 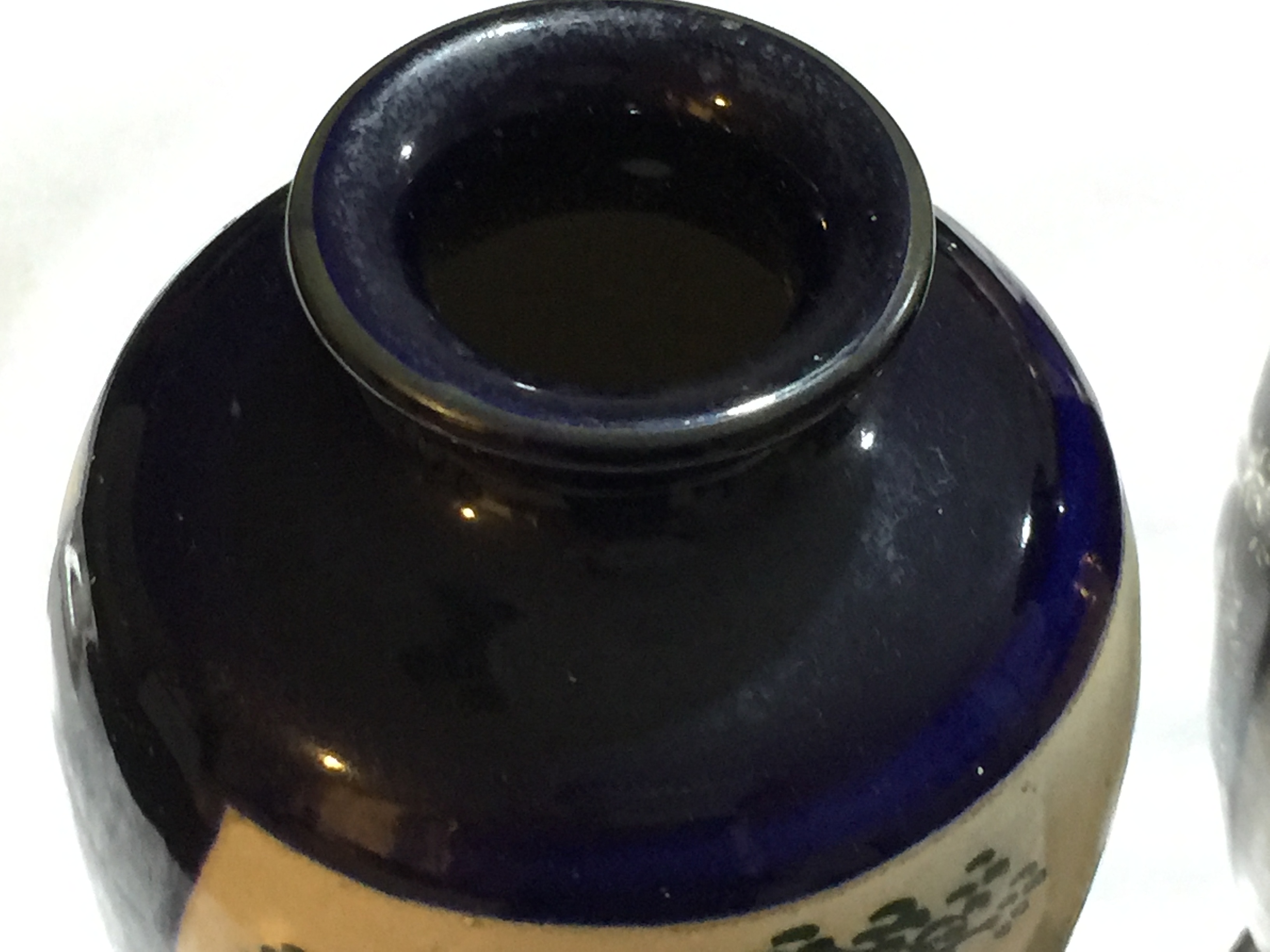 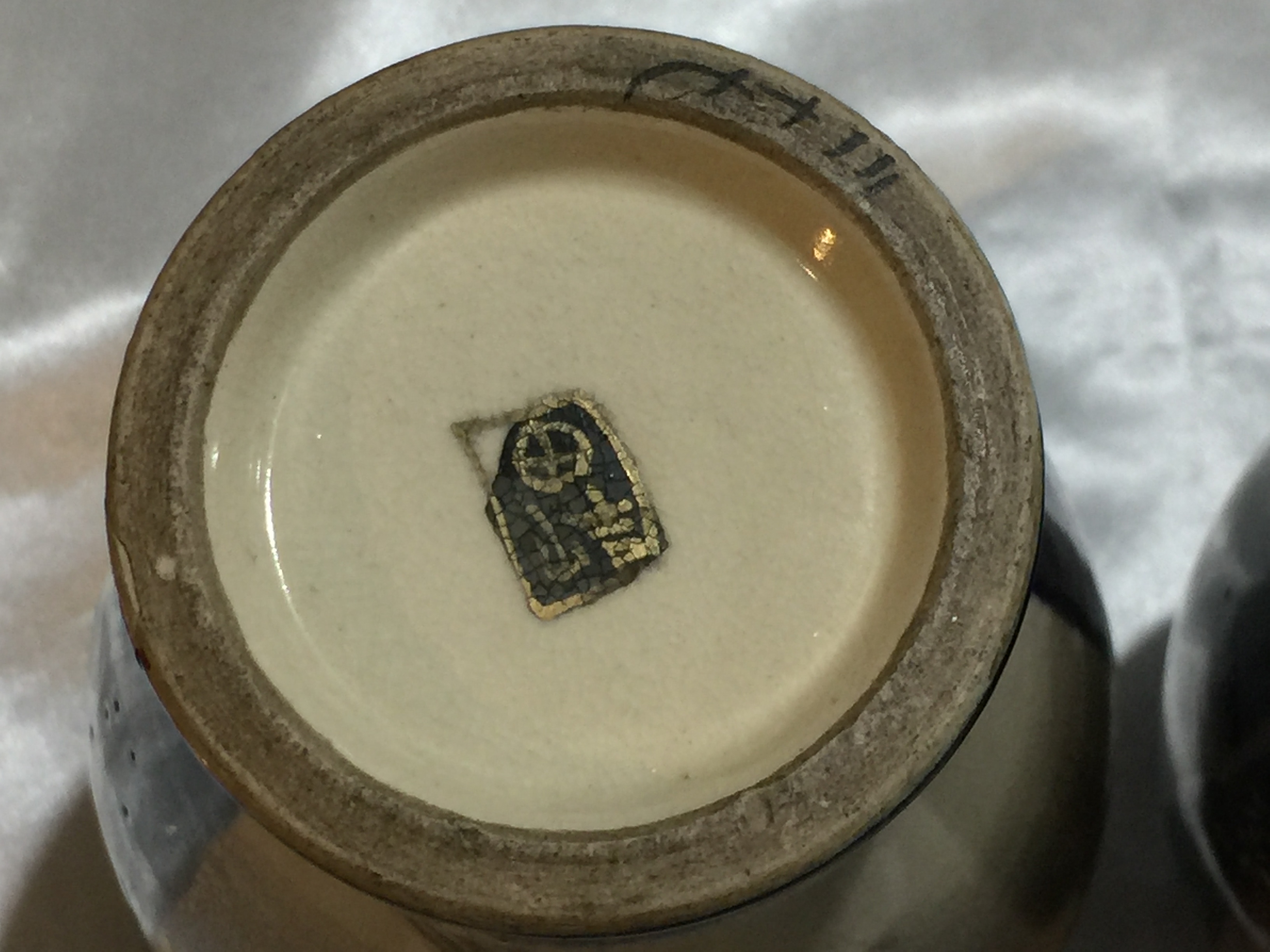 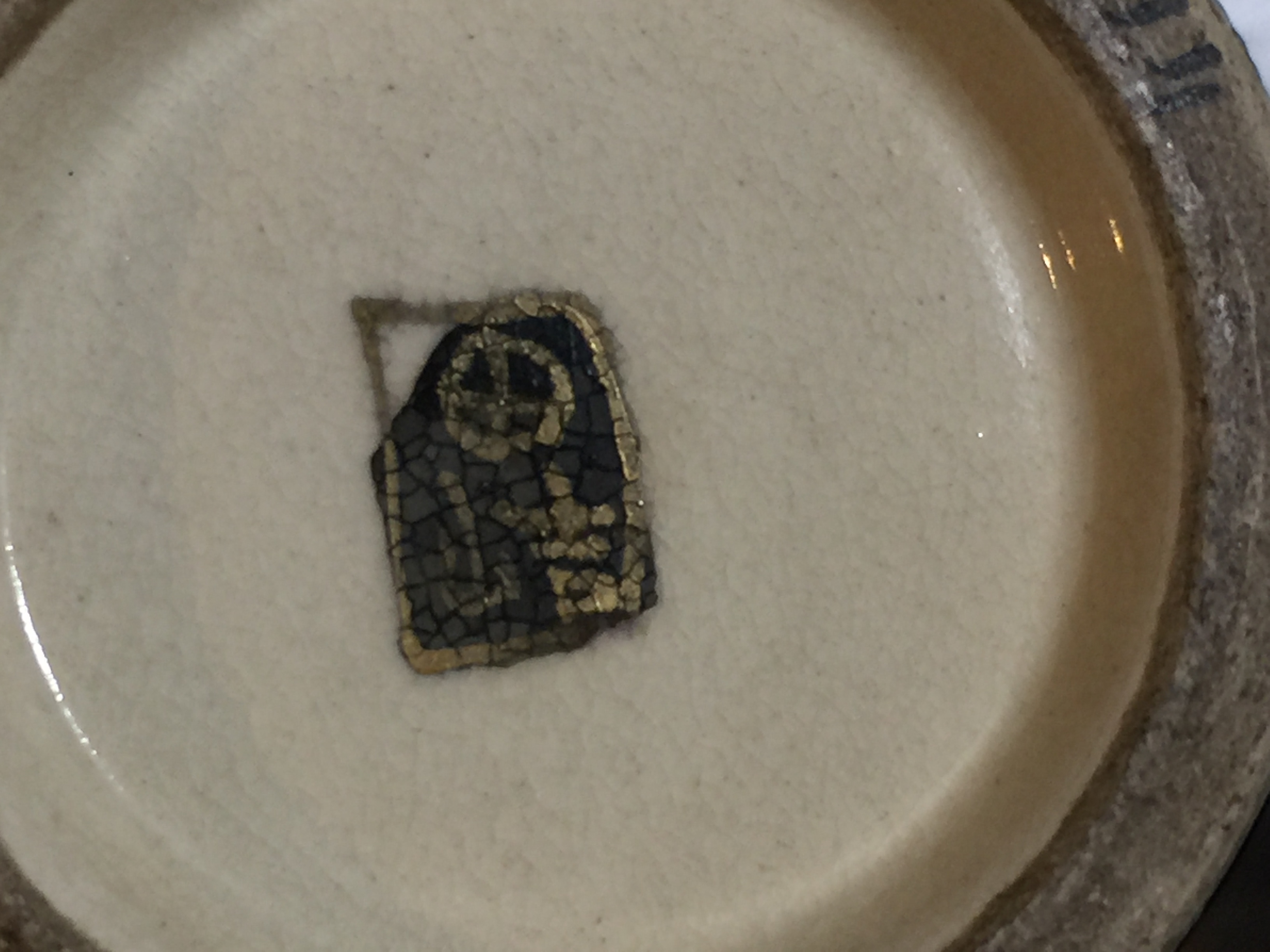 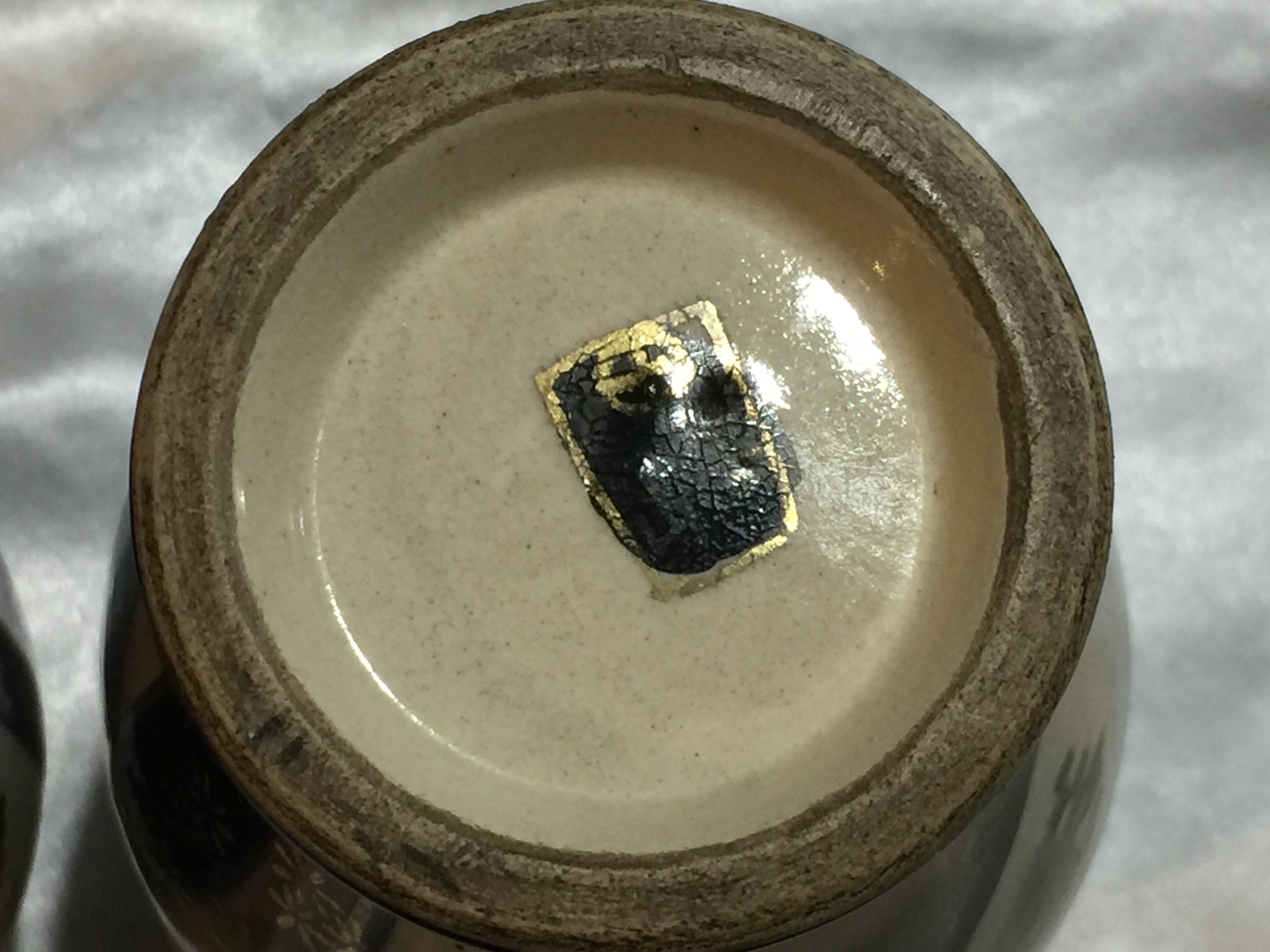 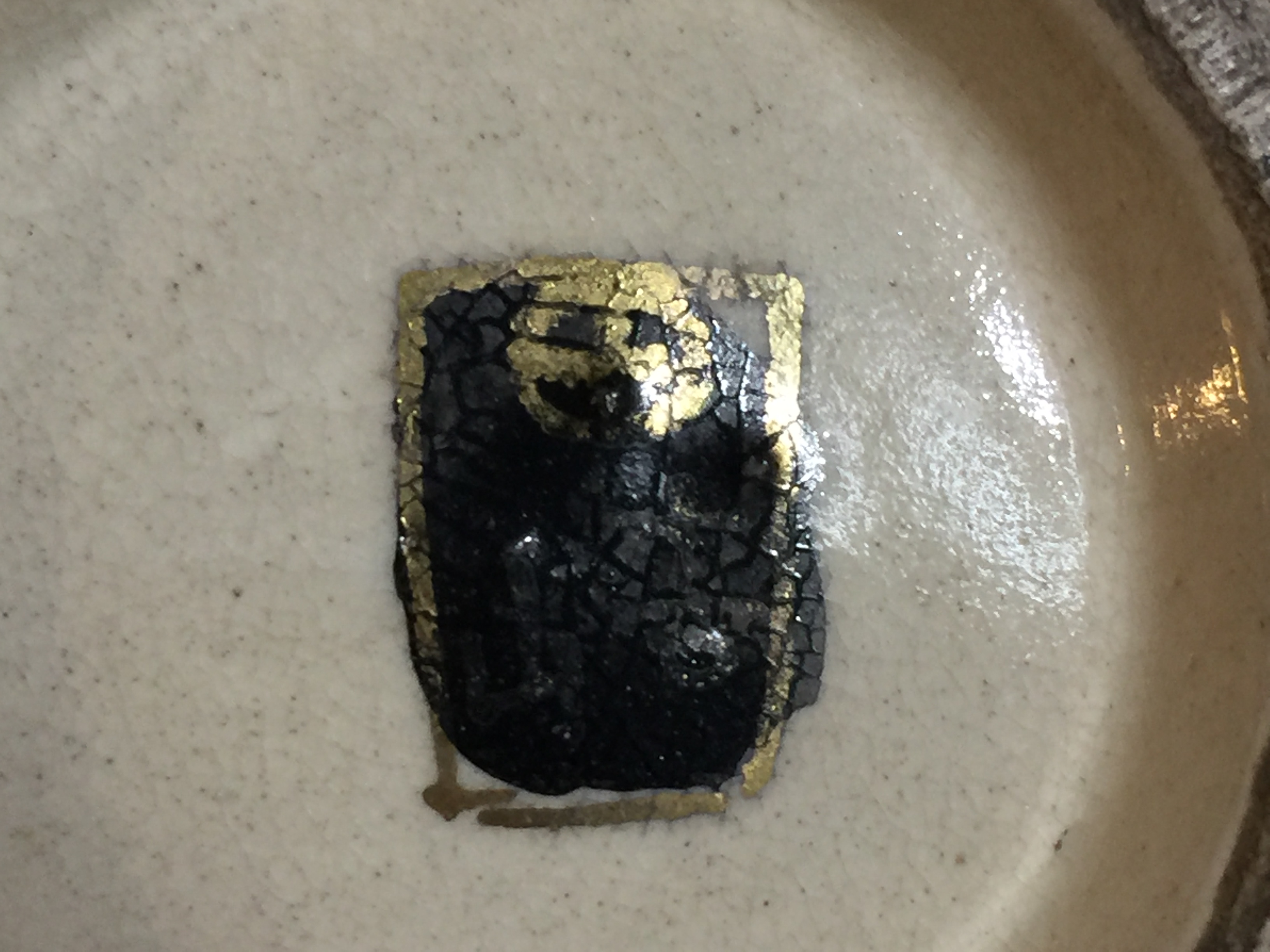 Answered in 44 minutes by:
Antique Expert: Josie-ESA,  replied 4 years ago

Verified
Hello,
I'm Josie, a moderator for this topic.
I sent your requested Expert a message to follow up with you here, when he is back online.

You didn't ask me about these yet, no.

These probably would have been together like this from 'birth'. Even though they don't quite match, they would be classed as a 'near pair' or a 'mirror pair' in that the scenic panel on one somewhat mirrors that in the other.

The gold is very prone to wear on these earthenware top-glazes and so one should handle them as little as possible as each time you touch them or wipe the dust off them it abrades a microscopic amount of the gold. Originally the gold on the dark cobalt blue (gosu blue as it's called) ground would have been very elaborate and was a fashionable decorative treatment at the time in order to replicate in ceramics the hugely popular Japanese gold inlaid decorative metalwork, known as komai-style damascening, as on this circa 1910 cigarette case.

However, this does attest to the vases' age and date. This particular Satsuma style of art pottery dates to the early 1900s, certainly no later than 1920.

The artwork is all hand-painted, genre scenic landscapes in panels with mothers and children among flowering trees, wisteria on the left, maple and tree peony (botan) on the right and the distant backdrop of Mt Fuji.

Satsuma pottery almost always has that fine crazing that these have -you can see it particularly on the bases. As I may have mentioned, that is not age crazing, it was created intentionally when the vase was fired in the kiln. It also should have a somewhat dull sound when you tap it, unlike porcelain which "pings" with a sustained note when tapped.

Satsuma was originally produced only in Kagoshima, way down on the southern tip of Japan, but soon spread to many other cities, mainly Kyoto, but also Tokyo, Nagoya, Yokohama and others, where truly thousands of potters and decorators were employed in its production. This type is referred to as Satsuma-yaki. All of it was made for export to the West. It was virtually unknown in the domestic Japanese market at the time.

Yours are marked on the base with the cross-in-a-circle Shimazu mon, the armorial crest of the Shimazu clan who were the ruling family in the Satsuma region of Kagoshima.

There are also two other kanji characters:

This is one of thousands of little known decorator marks that appear on this pottery and collectors don't pay too much attention to the specific name (apart from a handful of A-list decorator names that are known about and followed in the west) and simply collect it for its generic style.

As for value, selling at a good antique auction house or on line, I would give them a value of A$80 - A$125 for the pair, despite the wear to the gold. Full retail value (if you saw them for sale in an antique shop, say) of A$250 and is what you should insure them for.

PS. the odd markings on the rim in black are internal factory codes that one often sees on Kyoto Satsuma, mostly numbers, in this case the number 三十十 or 30/10 which are batch numbers or kiln numbers whose significance and meaning have long since been lost and are just of curiosity value only.

Verified
Robert S. and 87 other Antiques Specialists are ready to help you
Ask your own question now
Customer reply replied 4 years ago
Thanks Robert
Was this answer helpful?
Yes
No

Kim D.
Certified Appraiser & Antiques Expert
5,090 satisfied customers
Show more
Disclaimer: Information in questions answers, and Show Less
Disclaimer: Information in questions, answers, and other posts on this site ("Posts") comes from individual users, not JustAnswer; JustAnswer is not responsible for Posts. Posts are for general information, are not intended to substitute for informed professional advice (medical, legal, veterinary, financial, etc.), or to establish a professional-client relationship. The site and services are provided "as is" with no warranty or representations by JustAnswer regarding the qualifications of Experts. To see what credentials have been verified by a third-party service, please click on the "Verified" symbol in some Experts' profiles. JustAnswer is not intended or designed for EMERGENCY questions which should be directed immediately by telephone or in-person to qualified professionals.