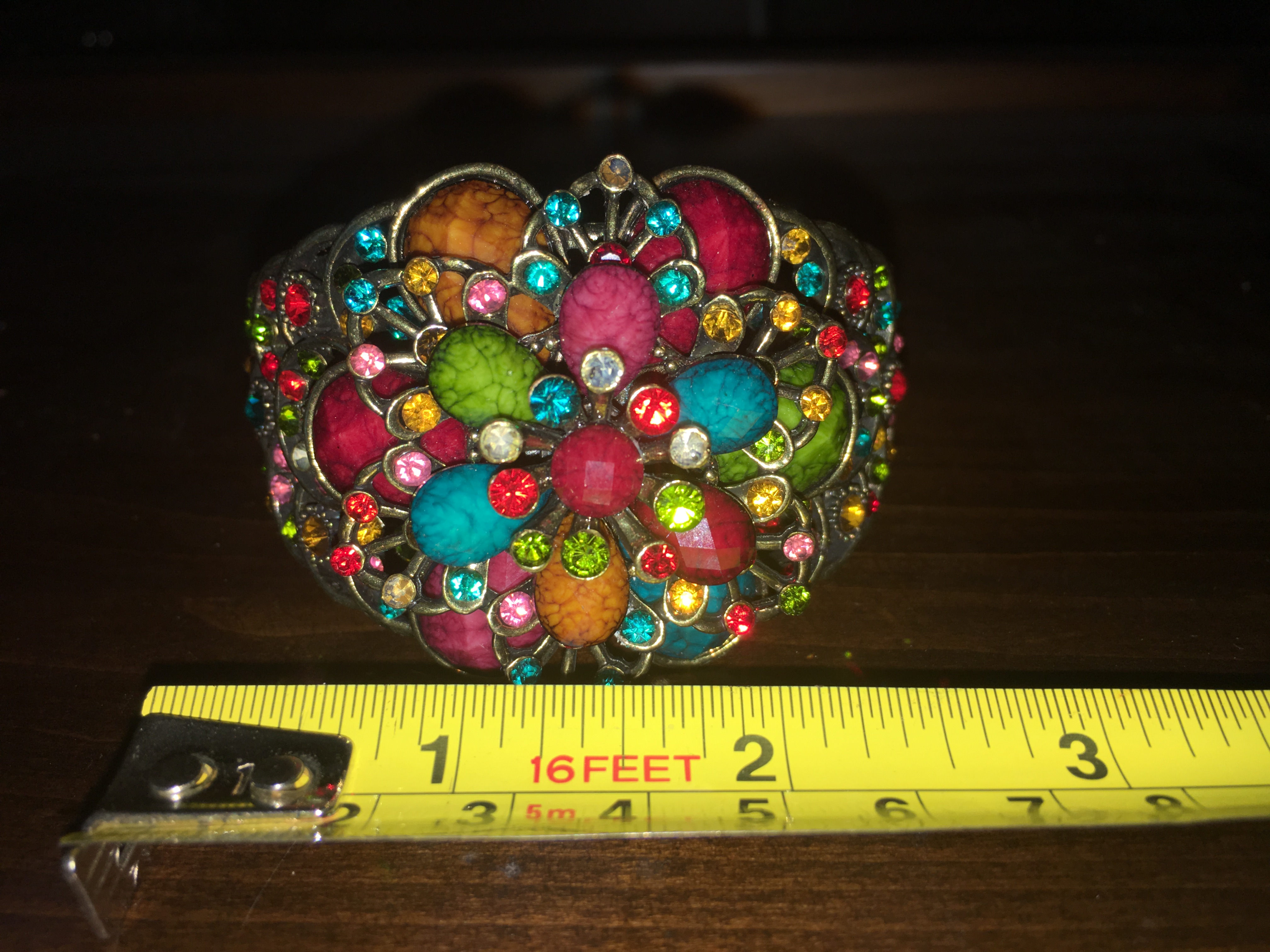 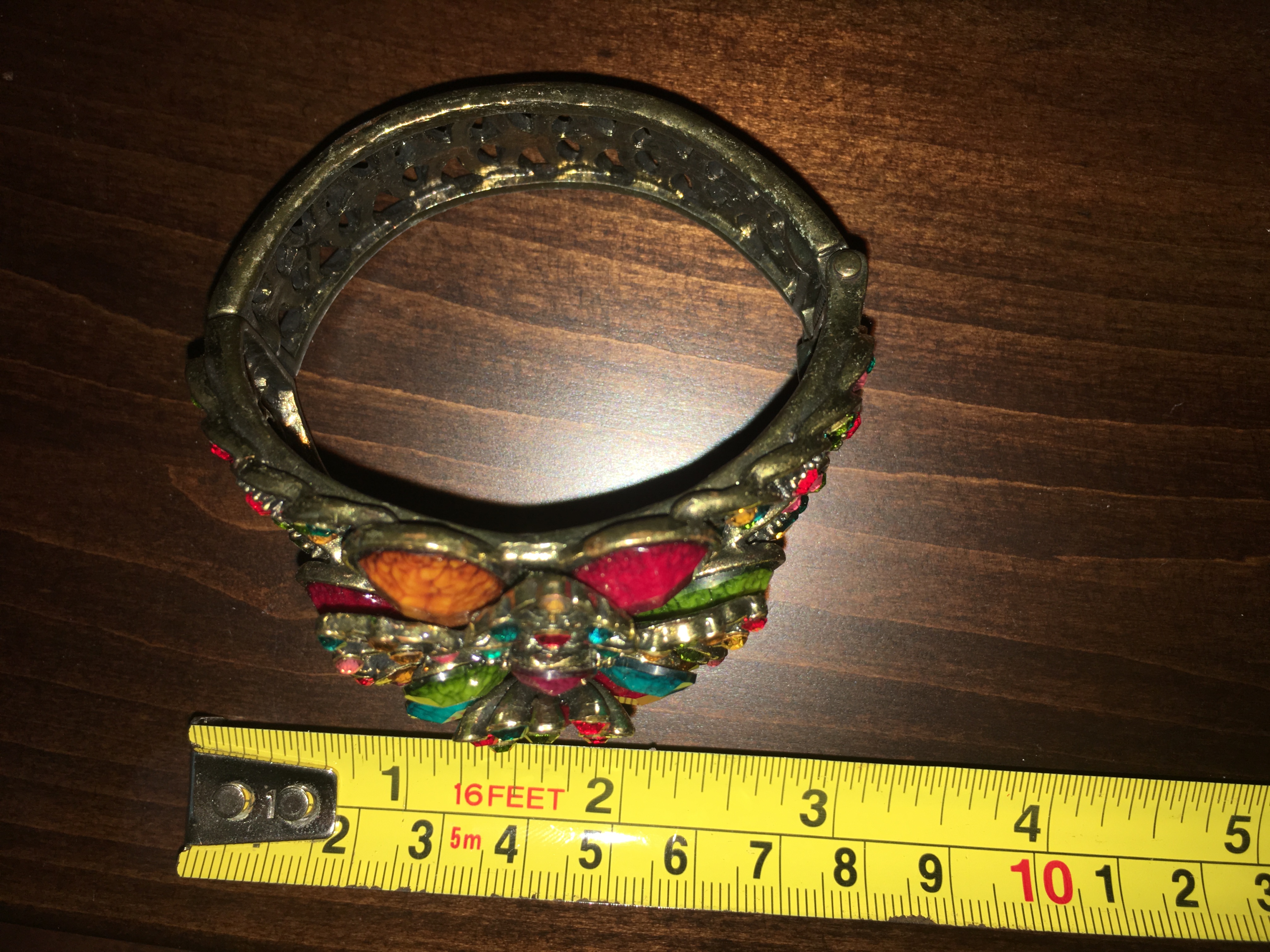 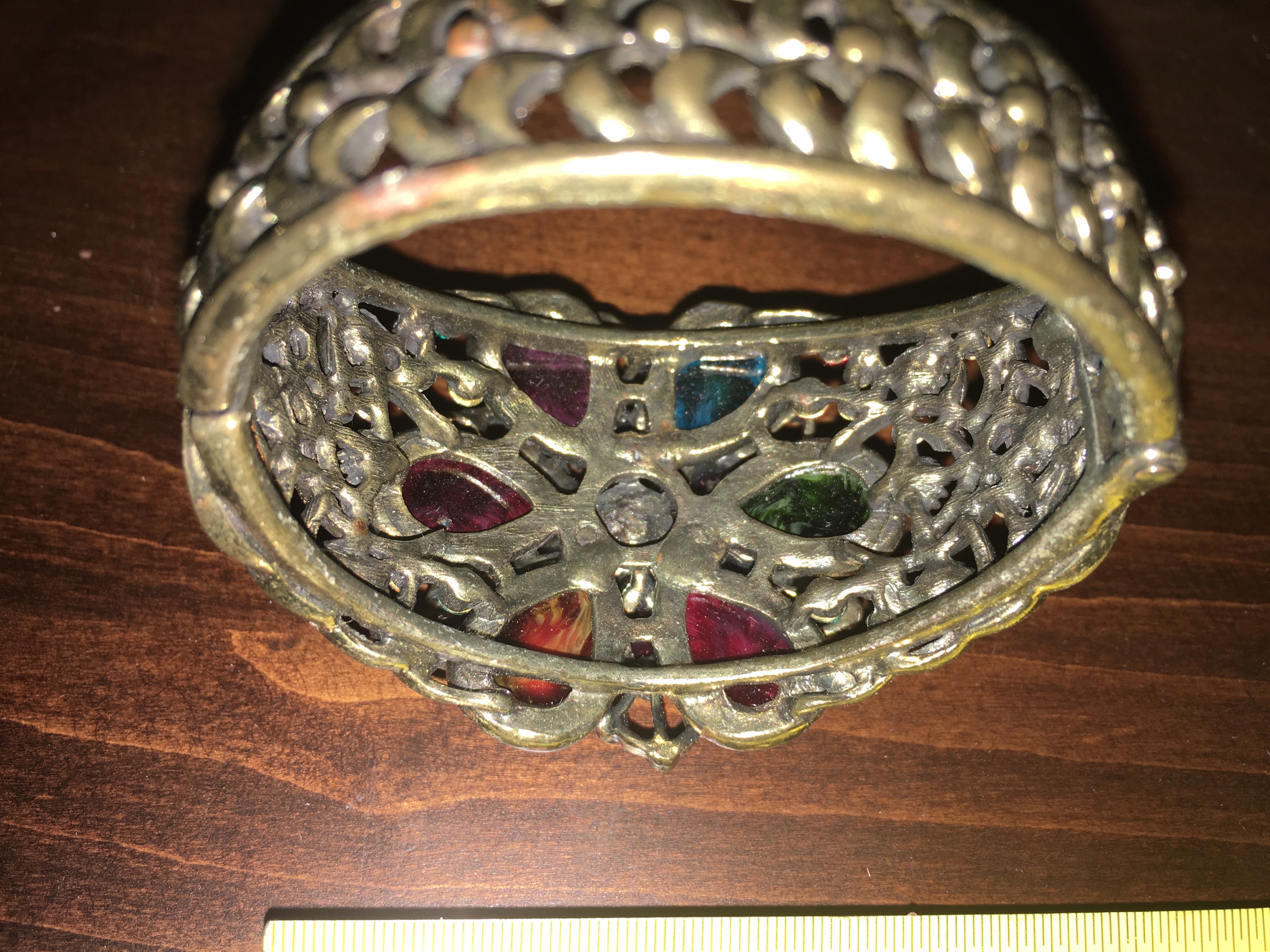 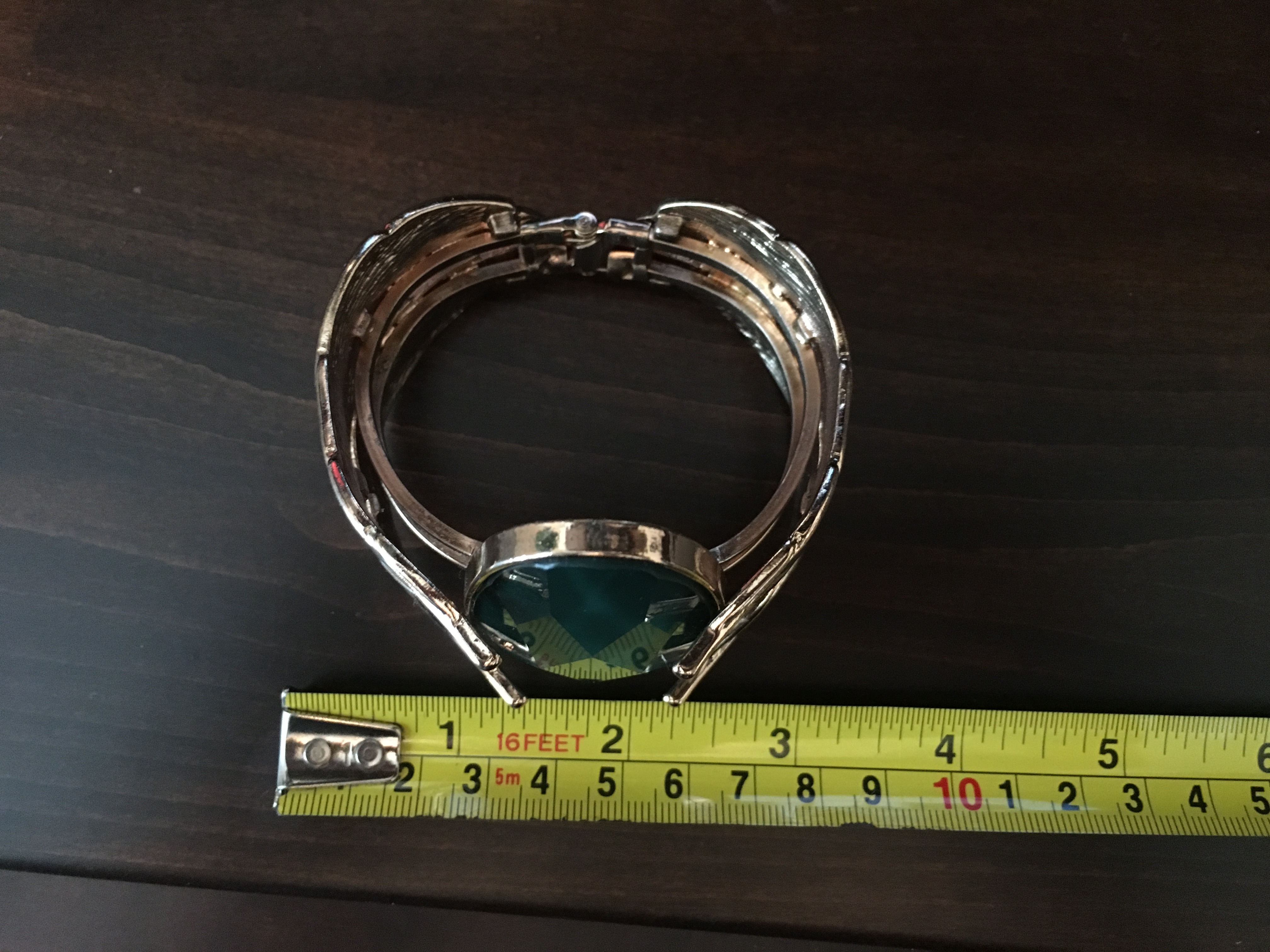 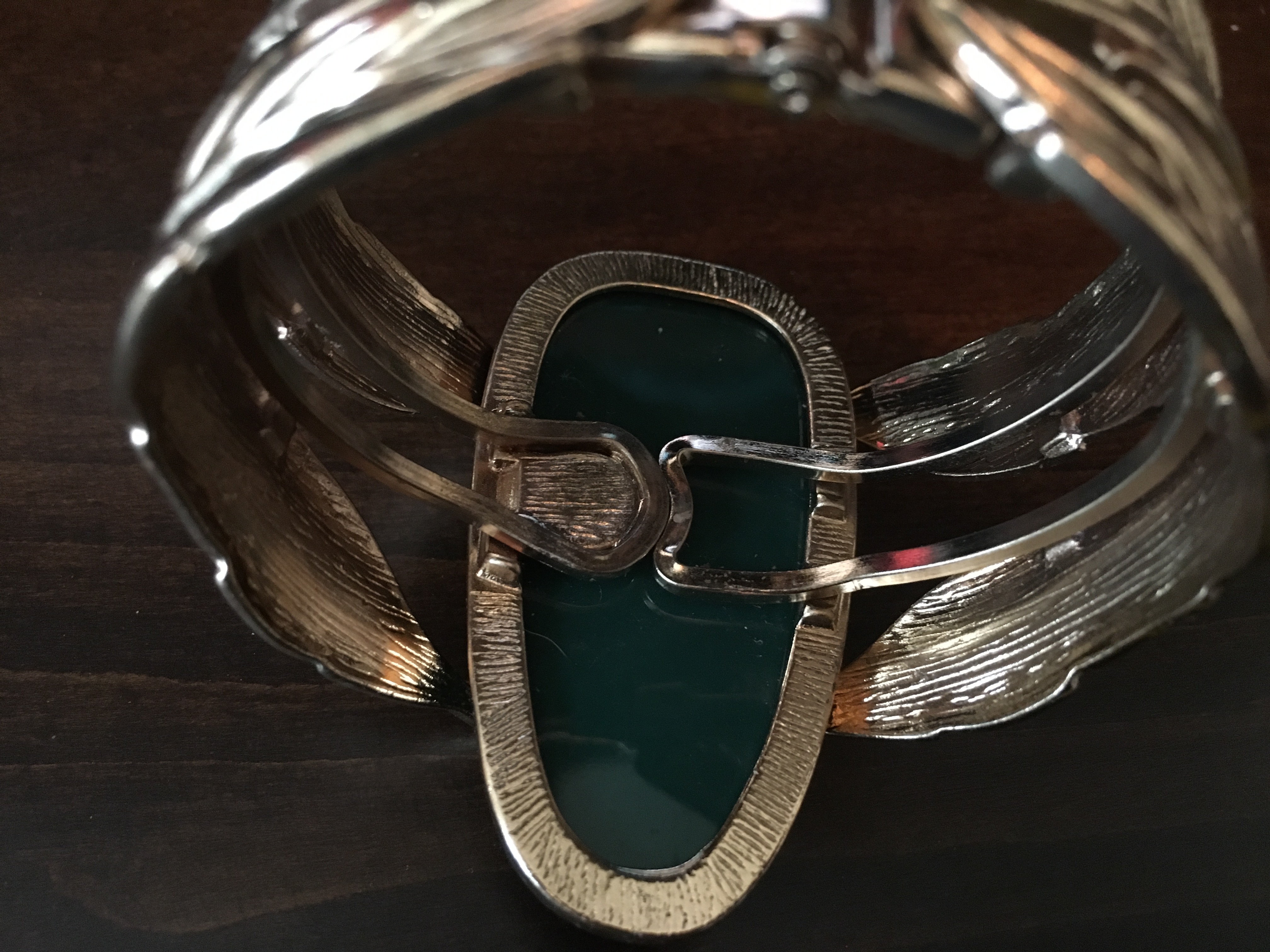 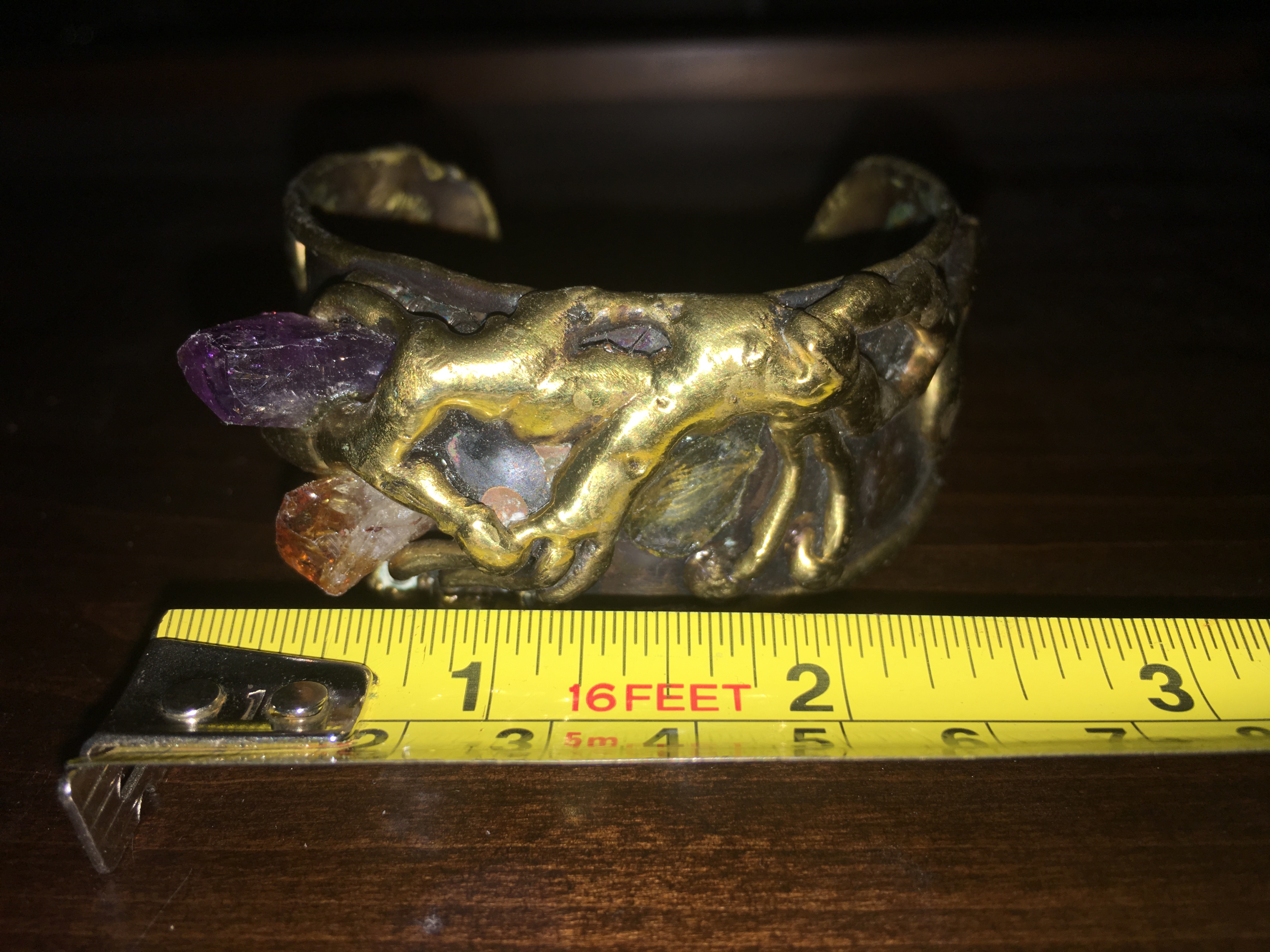 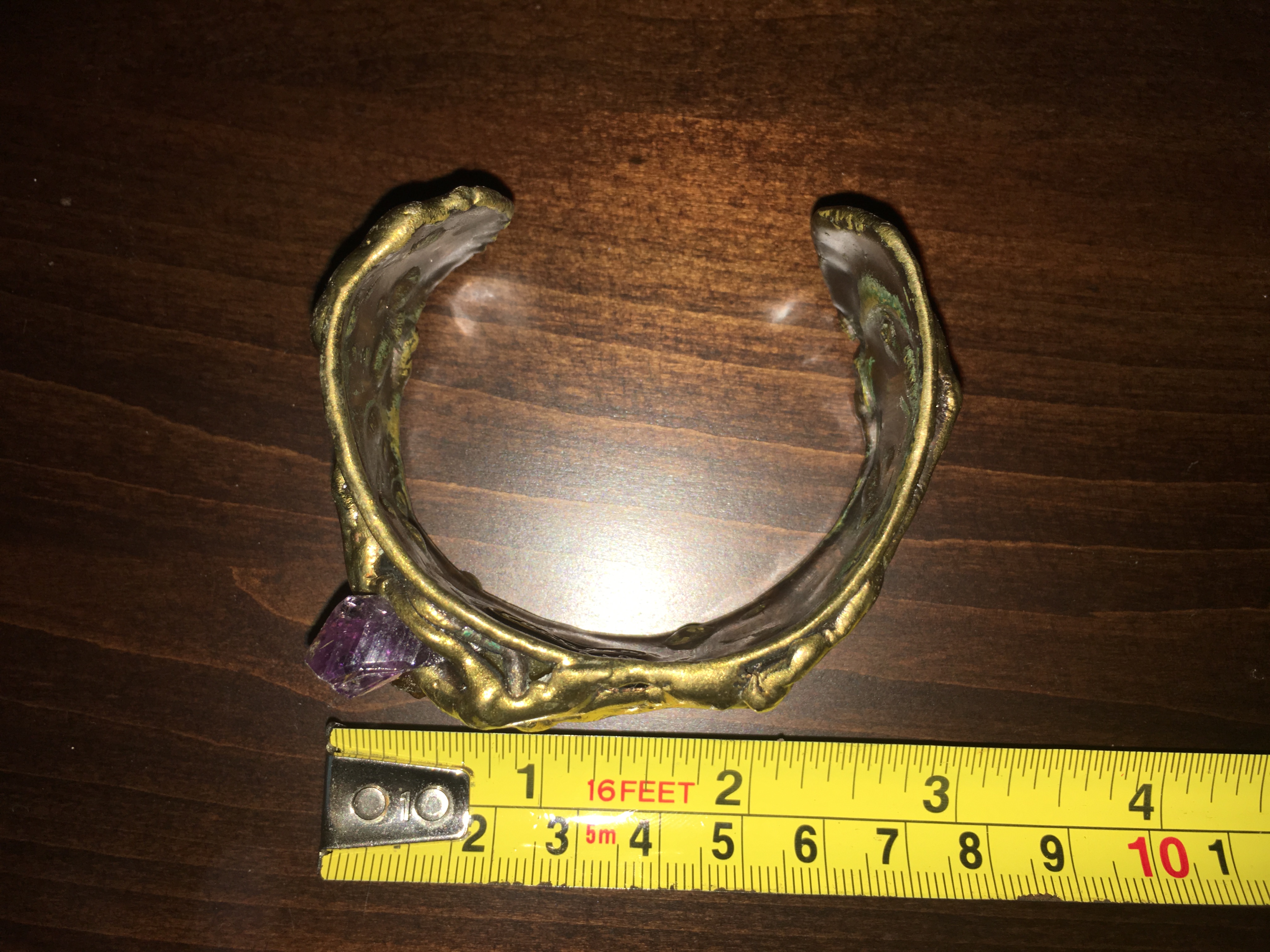 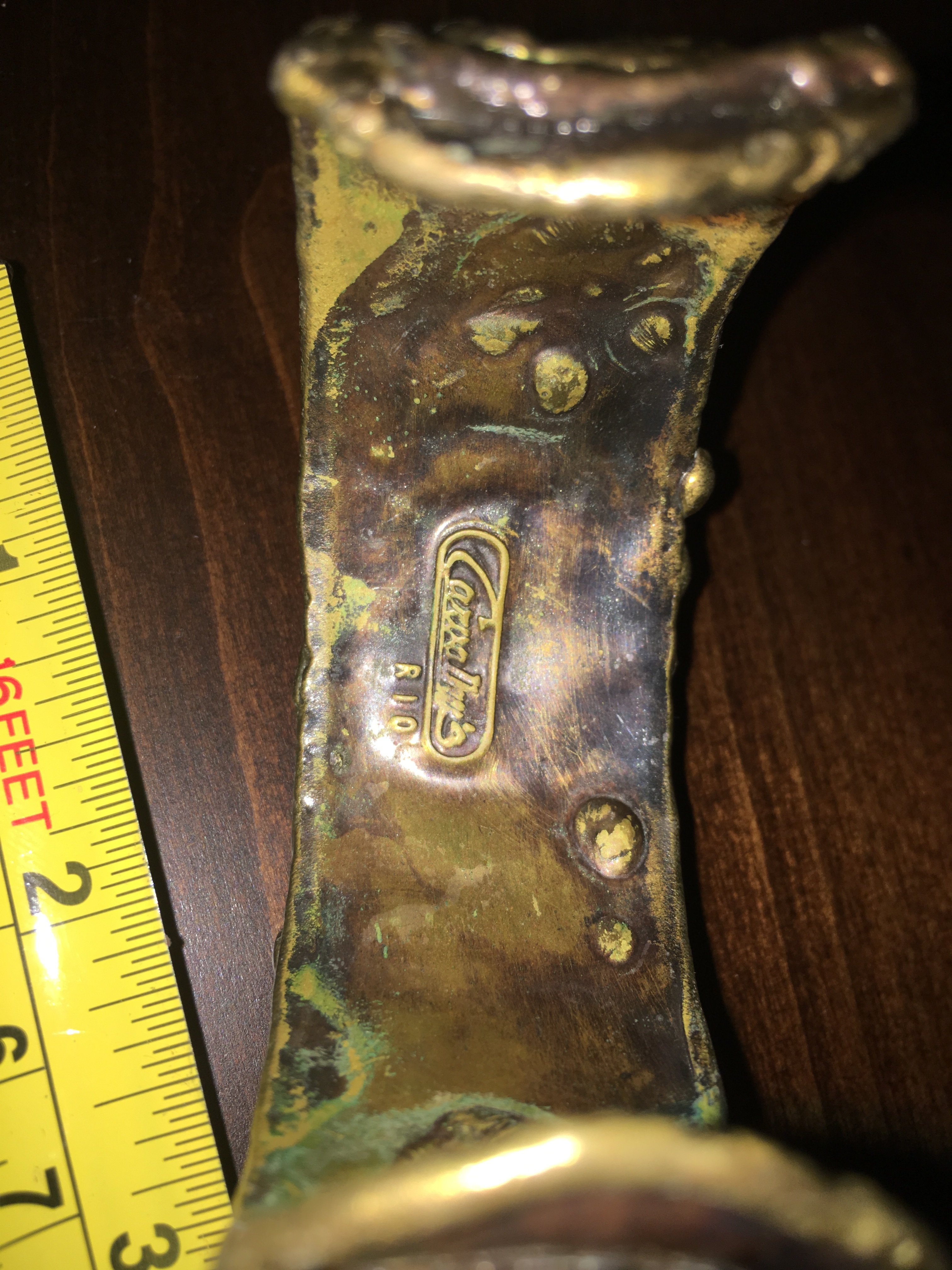 I am not seeing the "For Doris Only" typed before you ask your question. Did you type that in the first three words of the first sentence?

Customer reply replied 3 years ago
No, I clicked on ask another question from a previous reply you gave me.
The mark (5313) is the inside of 5311 & 5312 (all the same bracelet just different angles)

Understood but I cannot read it. Please tell me what the letters look like.

Customer reply replied 3 years ago
I can't understand what it says... this is a better picture of it. 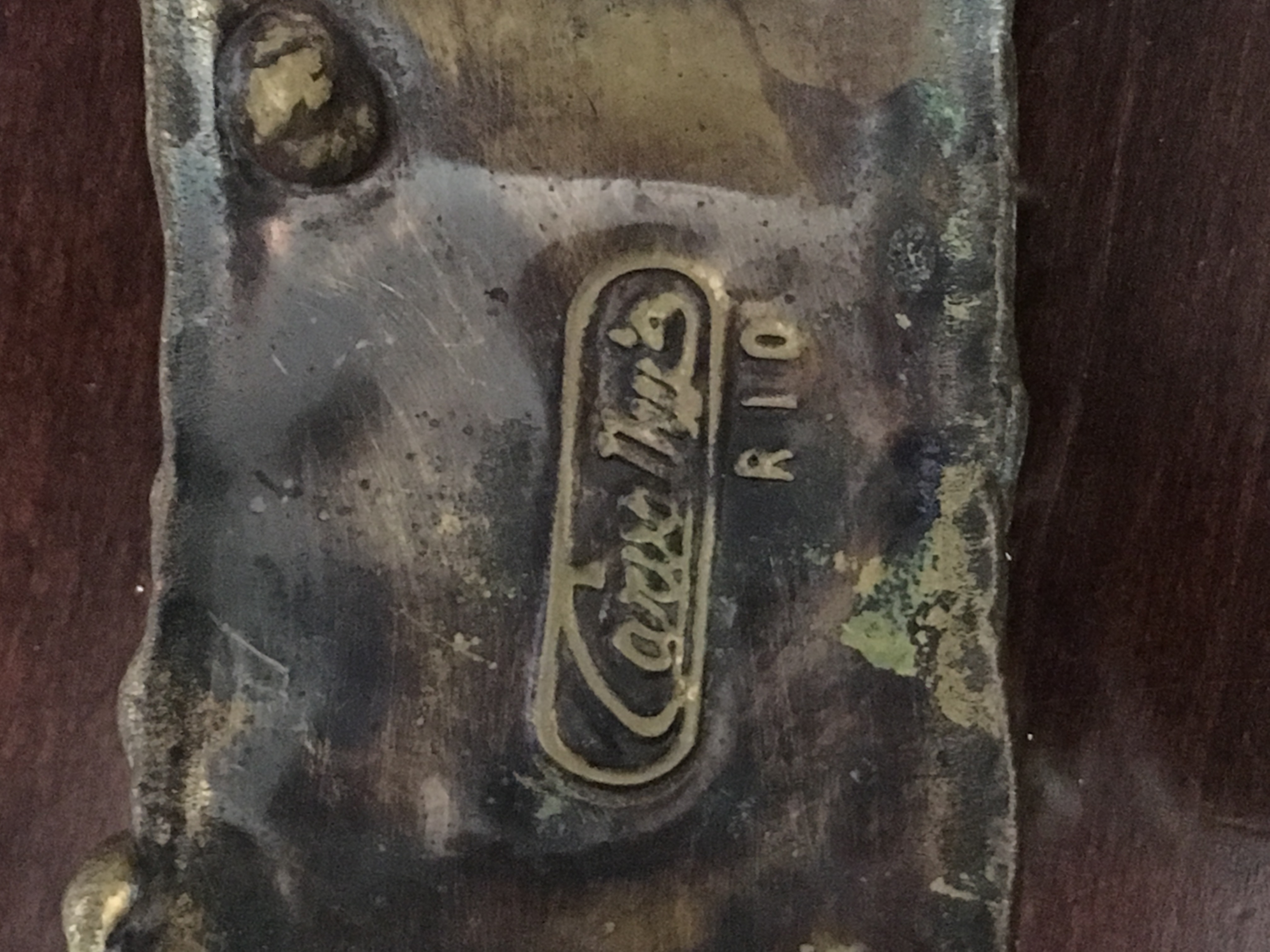 During the eighteenth and nineteenth centuries, almost all jewelry was manufactured with precious metals and stones. When women of the day started to demand a less expensive alternative, manufactures began to produce the simulated look of fine jewelry with “Paste” (a reflective, leaded glass made into stones) and the use of copper alloys. One famous alloy was invented by Christopher Pinchbeck, a clock maker from the eighteenth century. It was basically an alloy of copper and zinc that looked similar to gold. But true costume jewelry, or the more accurate term, “Fashion Jewelry” as we know it today, began in the 20th Century.

It all started in NEY’s backyard in New York City with our Casting Alloys:

When two World Wars, a stock market crash and a Great Depression forced many to abandon precious jewelry, the manufacturers and designers turned to non-precious alloys and components to create fashion pieces as an alternative. NEY was instrumental in designing and supplying these alloys to the new Power Houses of Costume Jewelry as they began to grow in Manhattan.

World War II caused a disassociation from the design studios like, Chanel in Paris, so jewelry designers turned their attention to the US market. As these historic companies grew, such as Coro (Cohn & Rosenberger), Miriam Haskell and Trifari, they looked to NEY for their raw material alloy needs. During the war, Ney was able to use ration coupons to purchase Tin in order to produce the alloys used in Fashion Jewelry at that time. When those rations dried up for the private industries, NEY designed new casting alloys made from Zinc, which allowed jewelry producers an alternative.

That rich history and long standing relationship continued with NEY, even after the giants of the industry, such as Monet, Napier, 1928, Bijou, Coro of Canada and so many others, began to build factories in Providence, Rhode Island and beyond. We were a key supplier of innovative and quality spin cast alloys that allowed these large factories to flourish by producing classic designs, some of which are pieces now being sought after as highly collectible works of art. NEY continued to be that key alloy supplier to the smaller New York City based businesses that were important job shops, manufacturing special pieces for the other firms.

As in all products that must maintain a low cost, most of those companies, both in New York and Rhode Island, began to move their operations to lower cost offshore factories. Ney followed them every step of the way with supporting alloys and new Lead Free formulas, which grew in demand during the 1980’s. Even to this day, NEY is a supplier to prestigious European, Asian and Pacific Rim companies that have refined the craft of producing, high quality, Fashion Jewelry that will one day be accepted as wearable art.

NEY has decades of extensive experience creating Pewters, Jewelry alloys and solders for a myriad of uses.

I will value your bracelets after studying the other two.

The colored one is obviously paste. Does it have any marks.

What about the green one marks?

Customer reply replied 3 years ago
I am not finding any marks on either one of them.

Thank you. I just finished a condo meeting at my place. I will resume working on these three now.

The one with purple stone made of Ney metal alloy features an uncut amethyst set in an Art Nouveau style cuff. It dates ca 1900-1915. The estimated retail value is $110-140.

I will now go to the others.

I hope this helps.

Verified
Doris and 87 other Antiques Specialists are ready to help you
Ask your own question now
Customer reply replied 3 years ago
Thank you so much!

100% satisfaction guaranteeGet all the answers you need
Share this conversation
Related Antiques Questions
Old coro jewelry, no, I need to know something about it,
Signed Coro ring, clip earrings and bracelet that match… read more

Glenda B.
Antique Appraiser
College
33,361 satisfied customers
Looking for an Antique appraisers. I have 3 pieces of WWIII
I have 3 pieces of WWIII women's jewelry from my great Aunt, a nurse with Salvation army. All is Excellent Vintage Estate Condition...a bracelet, ring possibly carved from wood and a bell charm. Would like to know a little history and appraisal value. Thank you! … read more

Diane in PA
Antiques Appraiser | Researcher | Seller
Associate Degree
708 satisfied customers
Tell me if these costume jewellery are antiques and of value?
I would like to start researching the other types of costume jewelry I have; some of them seem like they are French Canadian emblems, charm bracelets and more, many different types and styles. In all … read more

Glenda B.
Antique Appraiser
College
33,361 satisfied customers
Show more
Disclaimer: Information in questions answers, and Show More
Disclaimer: Information in questions, answers, and other posts on this site ("Posts") comes from individual users, not JustAnswer; JustAnswer is not responsible for Posts. Posts are for general information, are not intended to substitute for informed professional advice (medical, legal, veterinary, financial, etc.), or to establish a professional-client relationship. The site and services are provided "as is" with no warranty or representations by JustAnswer regarding the qualifications of Experts. To see what credentials have been verified by a third-party service, please click on the "Verified" symbol in some Experts' profiles. JustAnswer is not intended or designed for EMERGENCY questions which should be directed immediately by telephone or in-person to qualified professionals.