I have several items in a wedgewood collection which is well…

Customer Question
I have several items...

This collection was a present to my wedding about 40 years ago by a very old lady which received it at her wedding in the early 1900, some was damaged at that time and fixed with the technology available then

Yes I have many items in the series

Submitted: 3 years ago.Category: Antiques
Show More
Show Less
Ask Your Own Antiques Question
Share this conversation
Have a specialty? Apply to be an Expert

Answered in 2 minutes by:
Antique Expert: Glenda B., Antiques Appraiser replied 3 years ago

Hello,
Thank you for submitting your question to Just Answer.
When an expert signs on that can help you with this they will see it and pick it up for you. I will opt out so they can see this on the board when they sign on.
Glenda

Hi! My name is ***** ***** I would be happy to help with your Wedgwood, it sounds like a very interesting collection.

I can appraise the pieces individually right here on line for you, and one at a time (we get paid by JustAnswer by the question, so prefer to do one item per question) and all I need are clear photos of the piece and a clear photo of the entire bottom so I can see the marks.

Also the approximate size or height of the piece.

PS. Once you have the photos in your computer (if you are using a smart phone camera, just email them to yourself) it's then a simple matter to attach them. Just click on the paperclip icon, located above the text box where you are typing to me. If there's no paperclip, click on the "Add files" tab.

You need to be logged in to the JustAnswer site to do this. You can’t do it from email.

If you get stuck go here for help.

Alternatively, if you can collar a passing teenager with an iPhone they would have photos posted here in about two minutes.

Also, there’s no need to respond to any phone request, it will cost you extra which you don't need to pay. The phone requests appear to come from me, but do not, they are automatically generated by the site. I don't work for JustAnswer, I operate as an independent appraiser ‘on’ but not ‘for’ the site, so have no control over what they put on your screen! So my apologies for that.

Customer reply replied 3 years ago
Hello ***** own quite few items in the Wedgewood Imperial Porcelain series shown below, this collection is well over 100 years old, I believe to be between 100 and 120 years old, in fact some of the plate were damaged in the early 1900 and fixed with the technology available at the time in the Old England. However, the pictures below are just a sample of the series, if you wish to receive some additional pictures please let me know.
As I have taken this series with me from old continent to the USA, I would like to know if there is any value ( beside sentimental value) to it.
Thank you in Advance.
Vincenzo Canterini
Orlando(###) ###-####**@******.*** 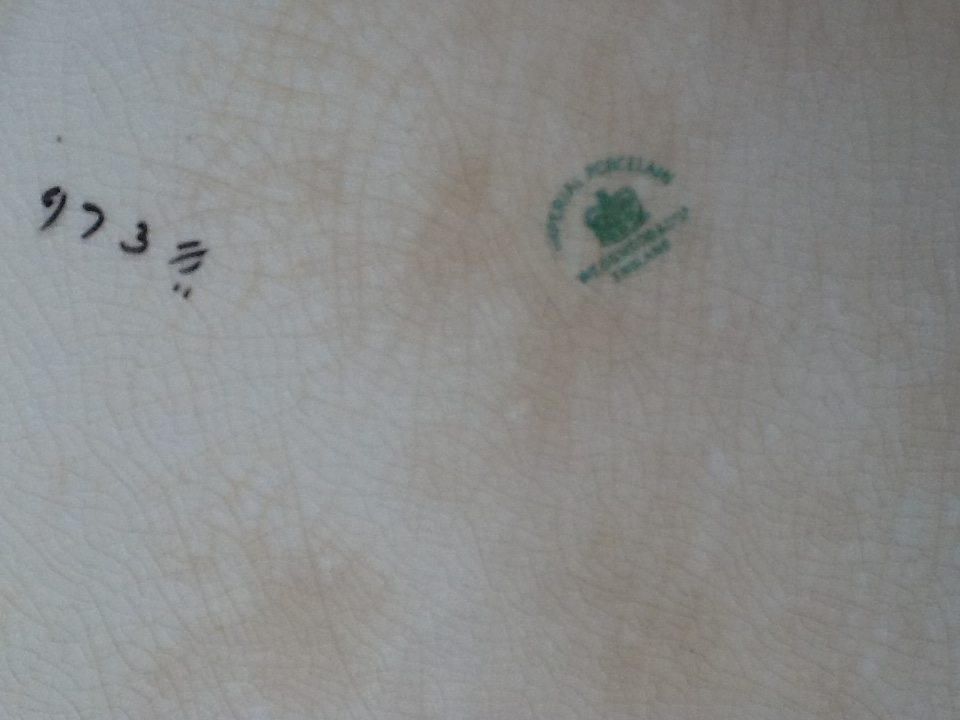 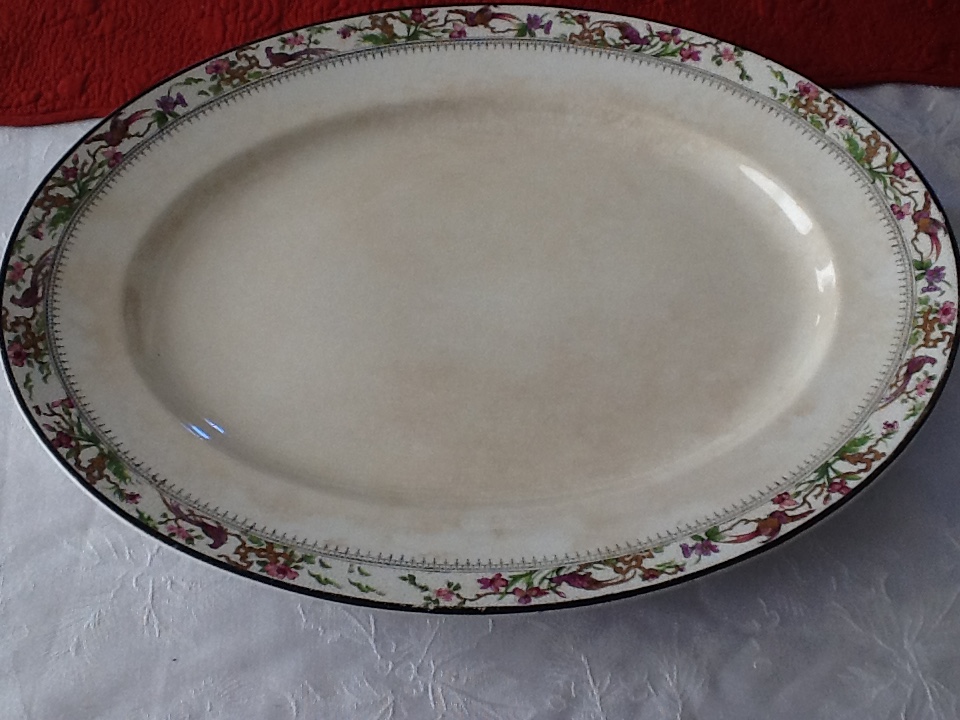 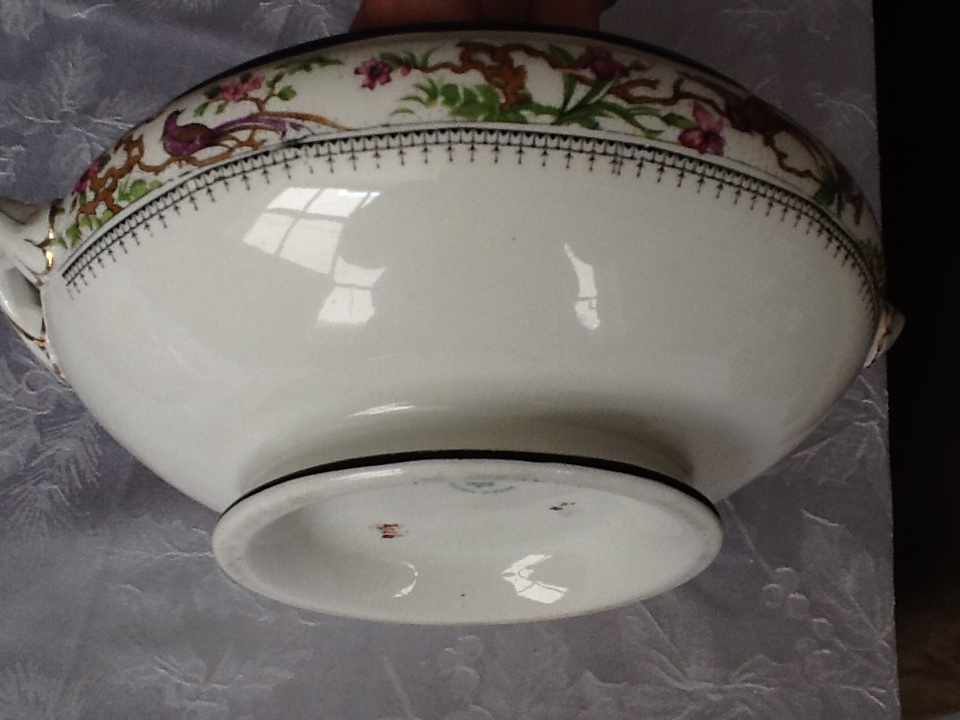 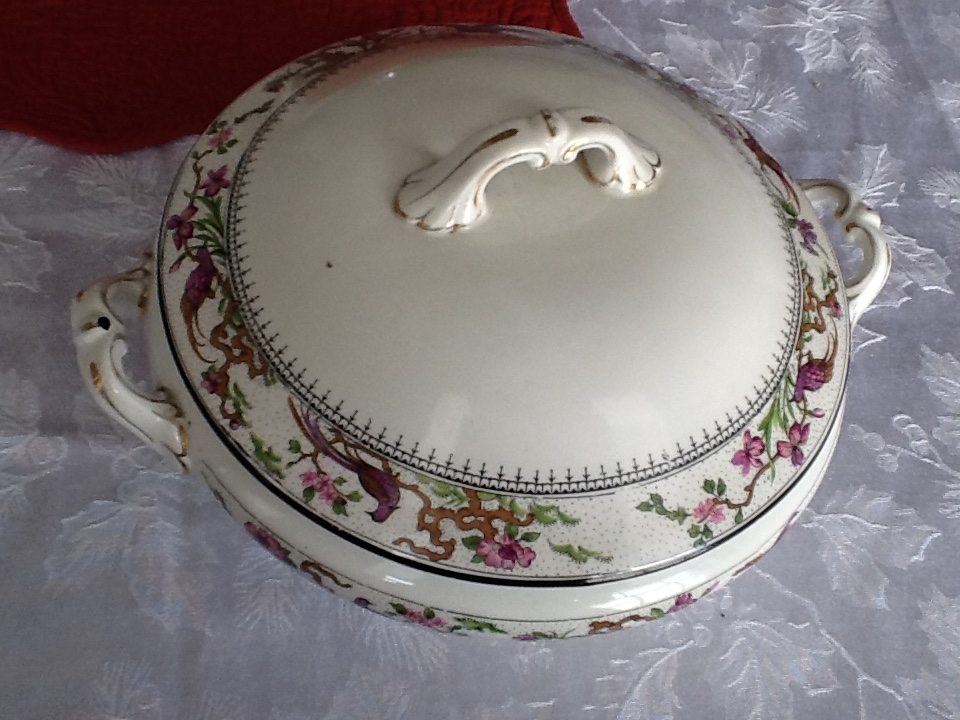 Many thanks for the photos, I can see exactly what you have.

You are quite correct, this is old English china which, according to the backstamp (which says "Wedgwood & Co Ld"), dates to the period 1906 - 1908, so well over 100 years old and therefore officially 'antique'.

The china is very typical tableware of its day, made of a tough white earthenware called "Imperial Porcelain" a trade name used by this company that suggested it was true porcelain, but not exactly. True porcelain is translucent. If you hold it up against a very strong light you'll see the light shining through. With this white stoneware (Imperial Porcelain) the light does not shine through. It is decorated with a combination of transfer printing (the outline of the design) and hand painting over the glaze in colored enamels. The gold trim is also all painted by hand.

Your "Not Josiah" Wedgwood (as I call it) began in the 1860s in Tunstall, Staffordshire at the "Unicorn Pottery" as they called it, but was no small "me too" operation. In the last two decades of the 1800s and up to the First World War they were employing six or seven hundred people in a vast export operation worldwide to the USA and the British empire. They produced good quality transferware like your tureen and platter. In the year 1900 they changed from "Wedgwood & Co" to "Wedgwood & Co Ltd" and in about 1908 they adopted a distinctive unicorn's head as a mark, so we can be quite specific about the date of your pieces.
Because Wedgwood & Co made so much at the time, and in so many patterns, almost all of them unnamed, including this pheasant chinoiserie pattern, very few of them are collected.

However, there is still a market for it as decorative antique English Staffordshire and, as such, if you saw your covered vegetable tureen for sale in an antique store, say, it would have a full retail price of $250. The platter, because it's a little stained (which distracts and detracts from value) would be priced at $75. These are also the replacement values for insurance purposes.

Expect to get 30% - 40% of this if you were to sell at auction or on line (eBay etc)
I do hope this helps!
Please let me know if you would like further assistance with this, I would be glad to.
Best wishes,
Robert.

I hope all is okay. I assume you must be having computer problems since I haven’t heard from you, however, if you are able to receive this, could you kindly take a moment to rate my services (with the stars or "accept" button) as this is how I get paid by JustAnswer at no extra cost to you.

We can still continue to communicate here on this thread after you do. Or, if you have another item you'd like to ask me about, just start a new Question and put "For Robert S....." in the subject line.

Customer reply replied 3 years ago
Hello Robert, sorry for not responding to your email, and yes I did receive it and fund it very informative, now staying on the same subject, I am still undecided on what to do with all these plates and bowls, some plate were broken in the early 1900 and repaired at t5he time with the technology available than, which means with a clip and re-glazed, some show the age. so I don't know weather to sell it or keep it for another long period. I have had it now for over 40 years.
Thank
Vincenzo

Thanks for getting back to me, glad you weren't caught in a tornado or something!

Those old staple repairs are rather trendy these days. Many young collectors look upon them as being a badge of authenticity rather than a negative and don't think they detract in any way from value.

As to the repair of the others, I would only do it if you were going to keep the china and put it on display for your own enjoyment. It's not worth doing if you're going to sell, because any increase in value gained would not cover the cost of a professional restoration.

Always hard to make these decisions, I do sympathize.

I do it by trying to imagine life without the item. Would I miss the emotional attachment and memories that the item brings? If yes, then keep I keep it. But it's still a hard thing to do.