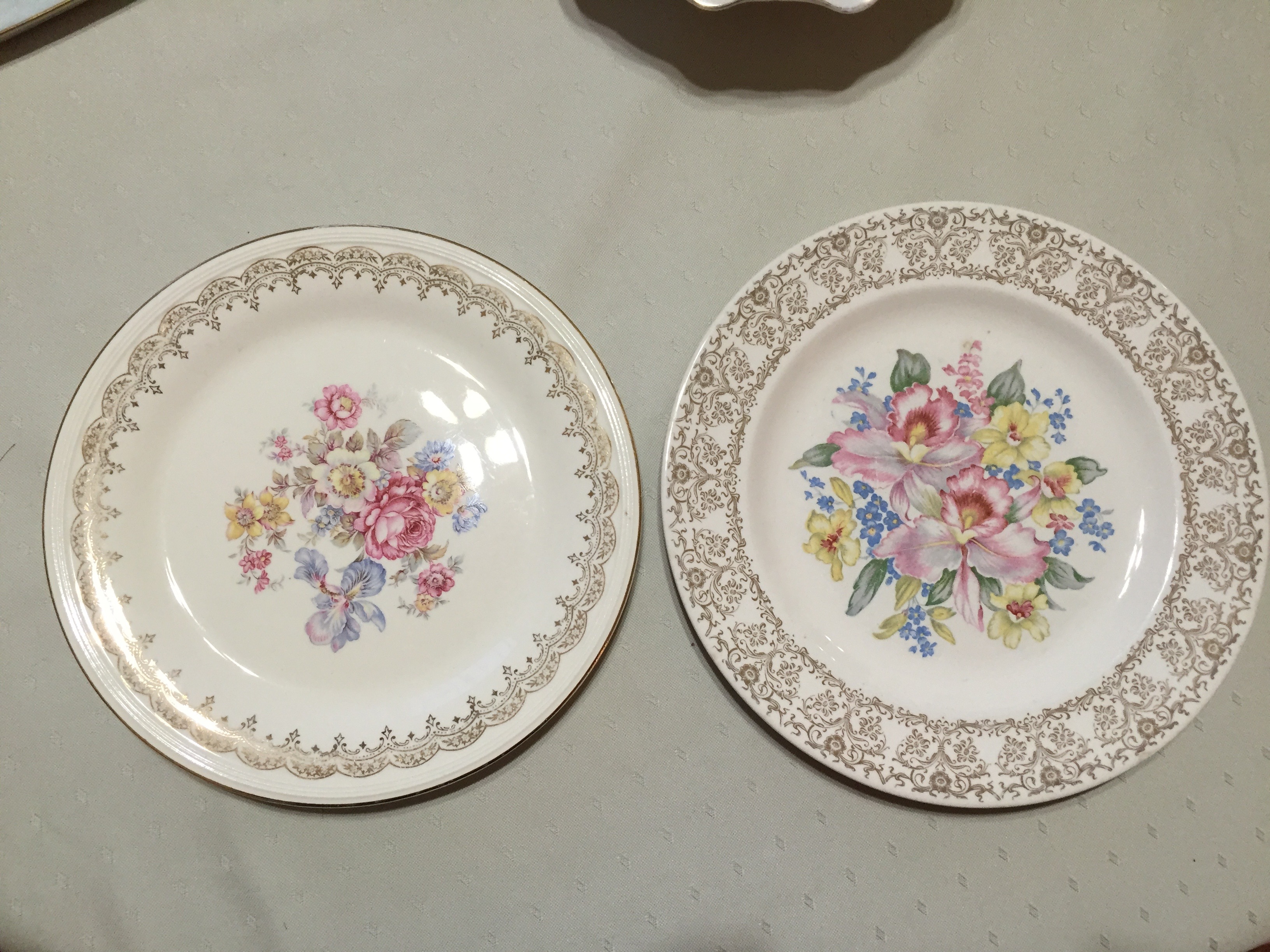 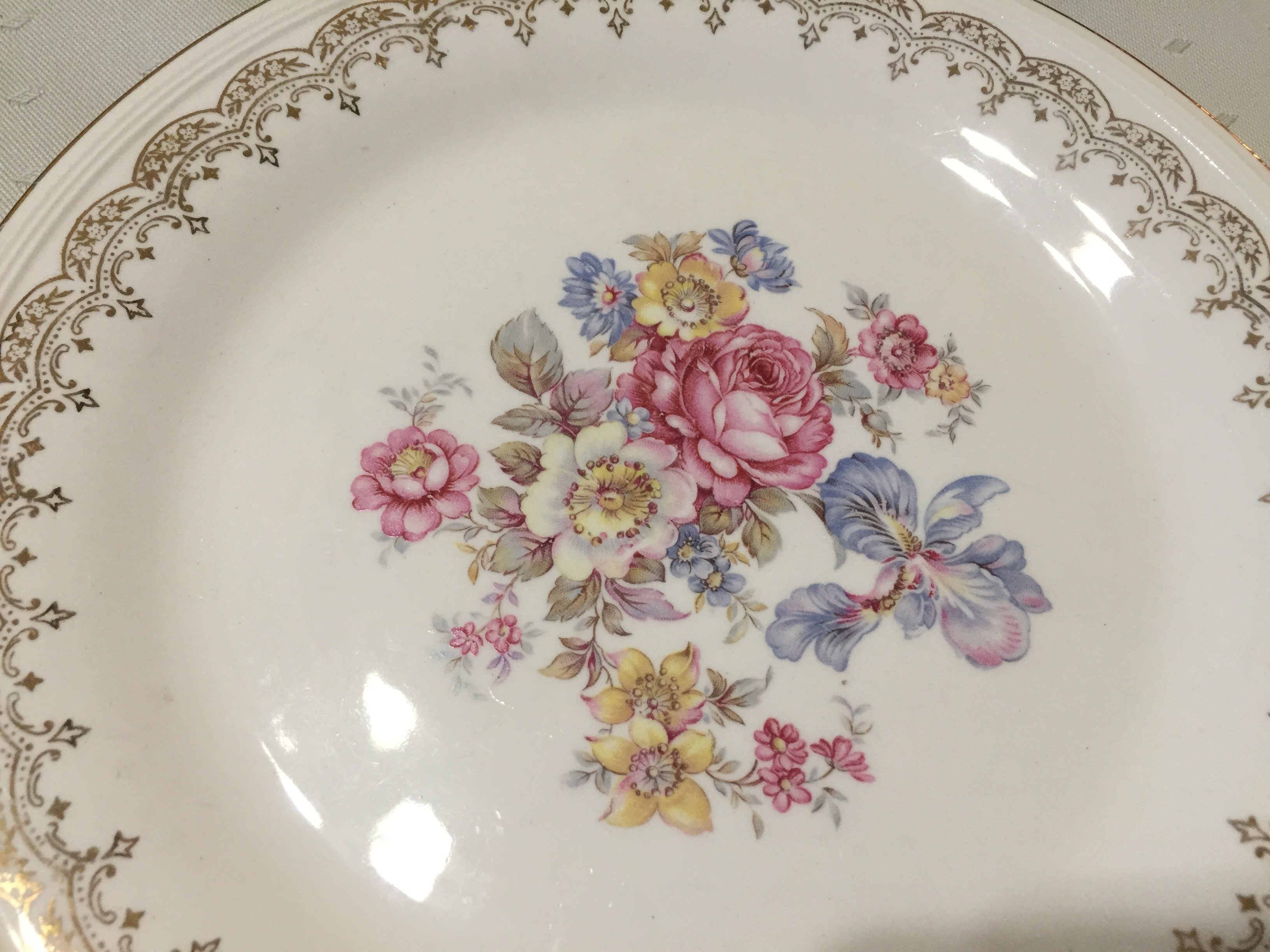 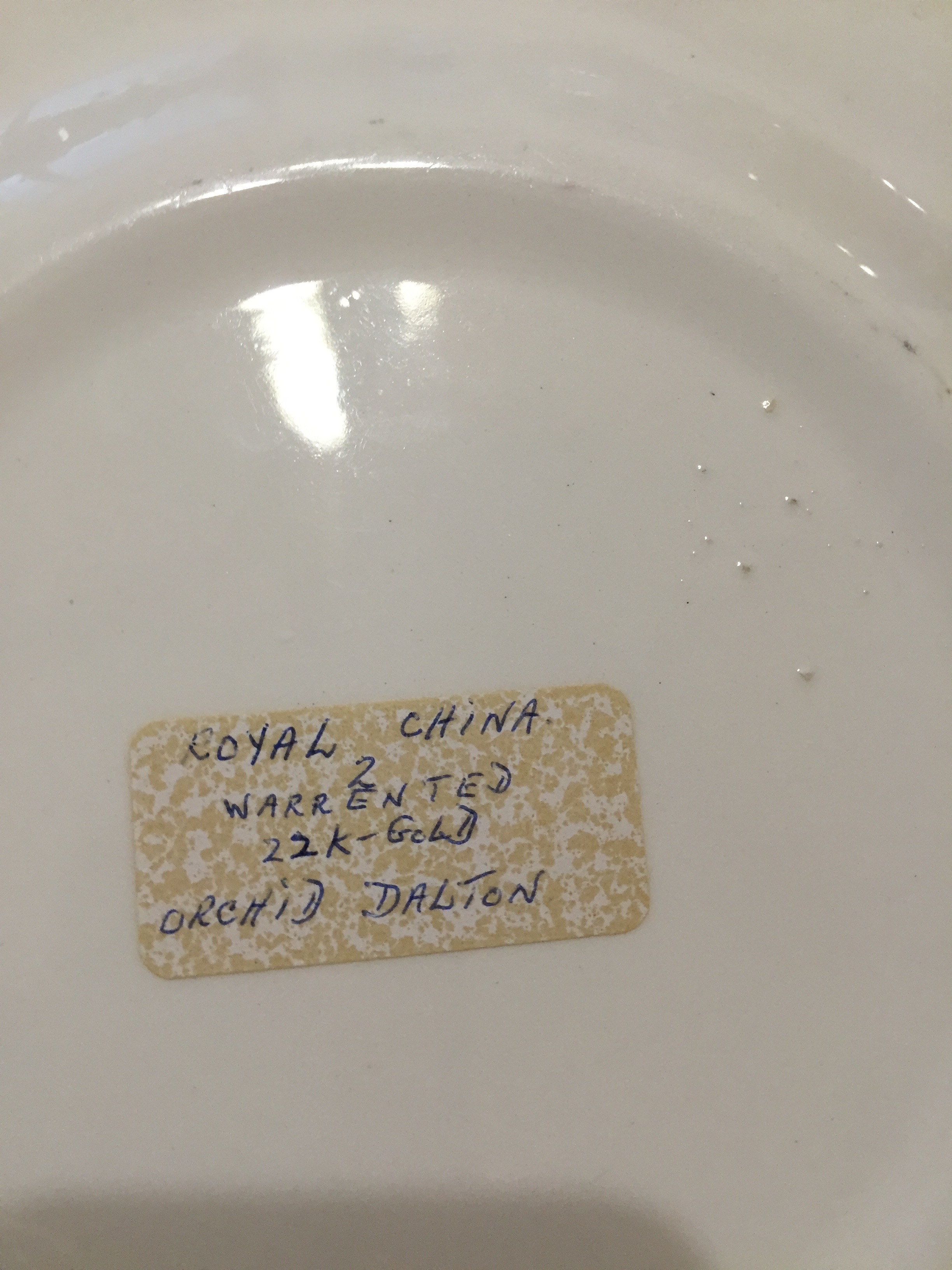 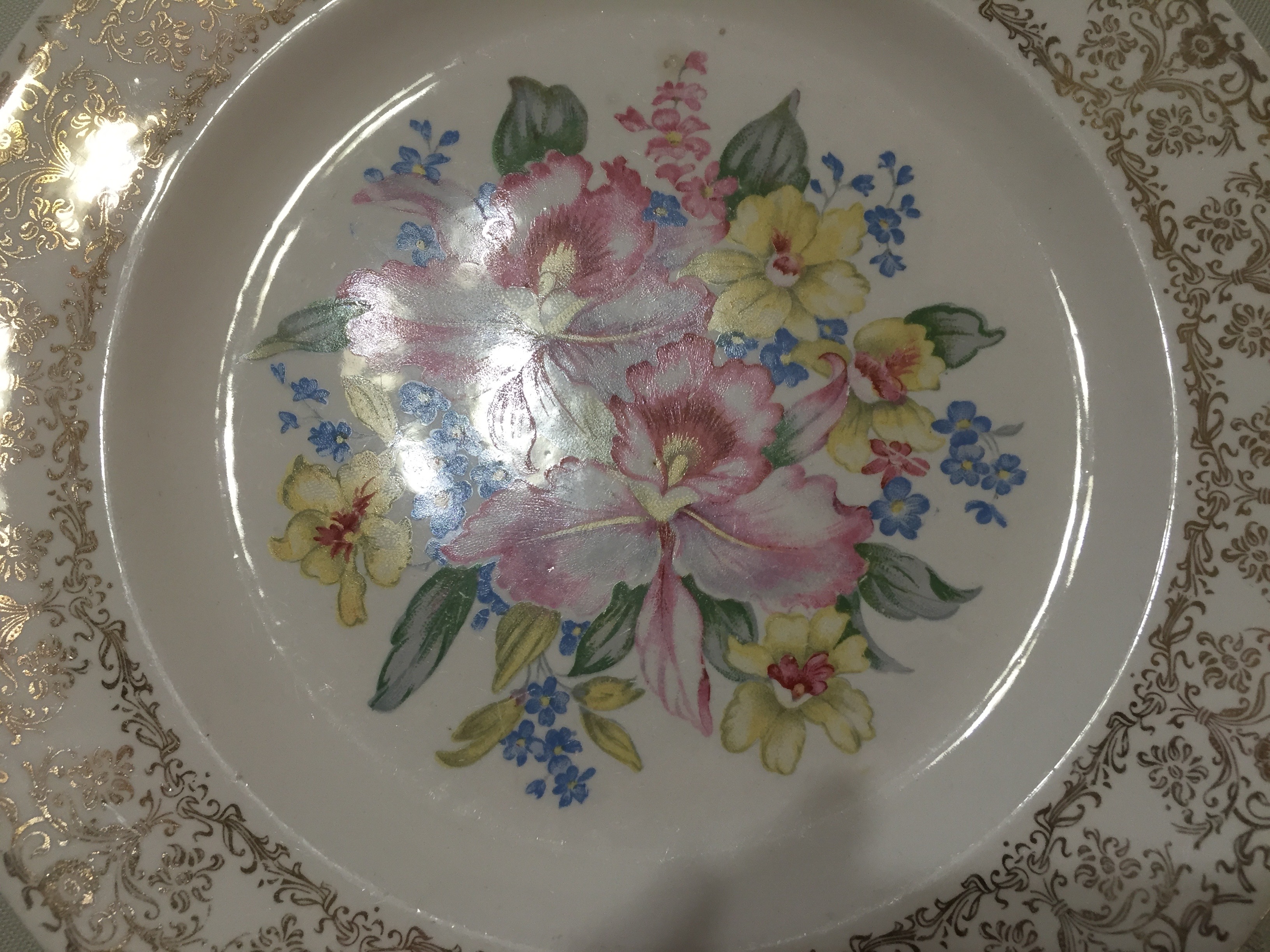 Hello my name is***** am a certified appraiser and I would be happy to help you. Please allow me to review the photos and post back when completed. Thank you

Customer reply replied 4 years ago
Thank you for contacting me. No rush.

Thank you for reply having trouble finding exact pattern but I do not give not I am checking my books now for the exact pattern. I appreciate your patience. If I do not post back tonight I will tomorrow. These are very nice plates.

Customer reply replied 4 years ago
have you been able to find anything? Thought you would have by now. If I don't hear from you tomorrow i will repost for another appraiser.

Thank you for your patience. I have not had internet access until today we have had winter storms and it has been hit and miss.

below is history of the company however not all patterns are listed.

Edwin M. Knowles ( 1869-1943) was the son of Isaac Watt Knowles (1819-1902), a founder and partner of the firm Knowles, Taylor, and Knowles Co., which by the turn of the century had become the largest pottery in the world. Edwin Knowles' father had helped pioneer many inventions that revolutionized American dinnerware manufacture.

Edwin M. Knowles entered the pottery business after receiving his education at Allegheny College and Harvard University. He took control of the Potters Supply Company of East Liverpool, Ohio in 1890. By 1900, he became founder and president of the Knowles China Company, which soon changed its name to the Edwin M. Knowles China Co.

The Knowles facility, located in Chester, West Virginia, was described as a "model plant of the highest order." Edwin Knowles determined that his firm would manufacture only the finest semi-vitreous ware. One year later, product from the plant was lauded by the Crockery and Glass Journal as the highest grade ware: "weight is light, its finish the finest, its shapes graceful, its decorations artistic, and its body and quality most durable." Knowles' reputation for creating quality product became known throughout the industry. Demand for Knowles product grew. It wasn't long thereafter that plant No. 2 was erected, just two miles south of plant No. 1 along the Ohio River in Chester, West Virginia in Newell, West Virginia.

By November 1930 production had been at its best since the ending of the World War. The number of workers at this time was about 725 and by March 1931, with business still improving, employment was reported at about 600 workers. The firm consolidated its manufacture at the Newell factory, selling its Chester, West Virginia plant to the Harker Pottery in 1931. Vincent Broomhall (1906-1991) became the firm's art director in 1935. The deco-modern Yorktown dinnerware was introduced in 1936. The line was characterized by many circular ridges or terraces, a common design feature at this time.

A full-featured line of kitchenware accessories was introduced by the company in 1938. Designed by Vincent Broomhall, it was said to be modern and promoted the space-saving concept in the kitchen. The ware, available in seven colors that could be mixed and matched, was said to be in colors jointly adopted by retail organizations.

The company introduced its new shape in 1939. Potomac was said to combine "Colonial grace with modern simplicity". Patterns on the shape would be in "The American Tradition", with themes from early American to American modern.

The company ceased operations in late 1962 citing a lack of foreseeable profits. This was largely blamed on tariffs which were said to encourage the importation of foreign dinnerware at prices so low that E. M. Knowles could not be competitive.

Royal China Company (1934 - 1986) began operations in the old E. H. Sebring China company building on June 1, 1934. Royal China was sold to Jeannette Glass Corporation in late 1969. Jeannette operated the company in the original building until fire destroyed the building in February, 1970. After the fire, operations were continued in the French Saxon China Company building which Royal had purchased in 1964. Coca Cola bottling Company of New York purchased this company in 1976 and operated the company until 1981 at which time the Jeanette Corporation was sold to a group of private investors from from Boston, MA called the "J" Corporation. This group ran the company until 1984. Royal was sold the last time to Nordic Capitol Corporation of New York City in 1984.n early 1986, Jeannette filed bankruptcy and in March, 1986 Royal China ceased operation. In January 1987, the building and contents were offered for sale at a bankruptcy auction. A buyer was not found for the building. After sitting empty for several months, the building was purchased in 1989 by a group of private investors from Salem, Ohio. They named the building Royal Sebring properties and currently lease it as warehouse space. - Information from "A Collectors Guide for Currier & Ives Dinnerware" by Eldon R. Aupperle.

Both plates are beautiful pieces and have been well taken care of. I appreciate your patience and am happy to have been able to help you. If I can be of further help please let me know as I am always happy to help and do my best to be thorough in the information and accurate in current values. Thank you again.

1 or 2 stars are that I have not helped you in answering 3-4 I have helped you yet not completely and 5 stars are I have answered you and been fully helpful. If you still have questions please allow me to help you fully before rating with the stars. I enjoy helping customers and do my best to fully answer all questions.

Doris
Personal Property Appraiser
Bachelor's Degree
12,920 satisfied customers
Show more
Disclaimer: Information in questions answers, and Show More
Disclaimer: Information in questions, answers, and other posts on this site ("Posts") comes from individual users, not JustAnswer; JustAnswer is not responsible for Posts. Posts are for general information, are not intended to substitute for informed professional advice (medical, legal, veterinary, financial, etc.), or to establish a professional-client relationship. The site and services are provided "as is" with no warranty or representations by JustAnswer regarding the qualifications of Experts. To see what credentials have been verified by a third-party service, please click on the "Verified" symbol in some Experts' profiles. JustAnswer is not intended or designed for EMERGENCY questions which should be directed immediately by telephone or in-person to qualified professionals.