S., here is a metal box I found at the community garage 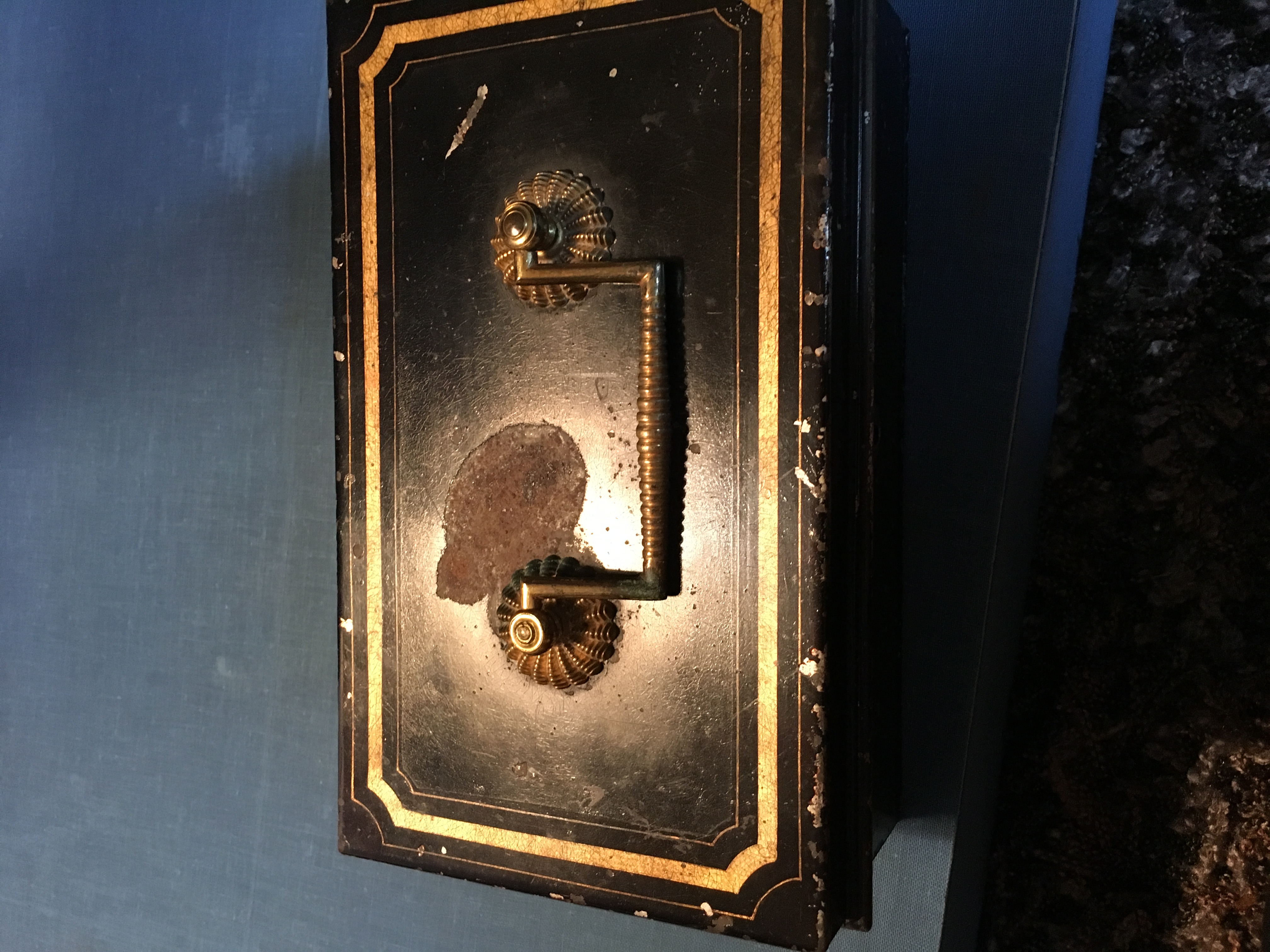 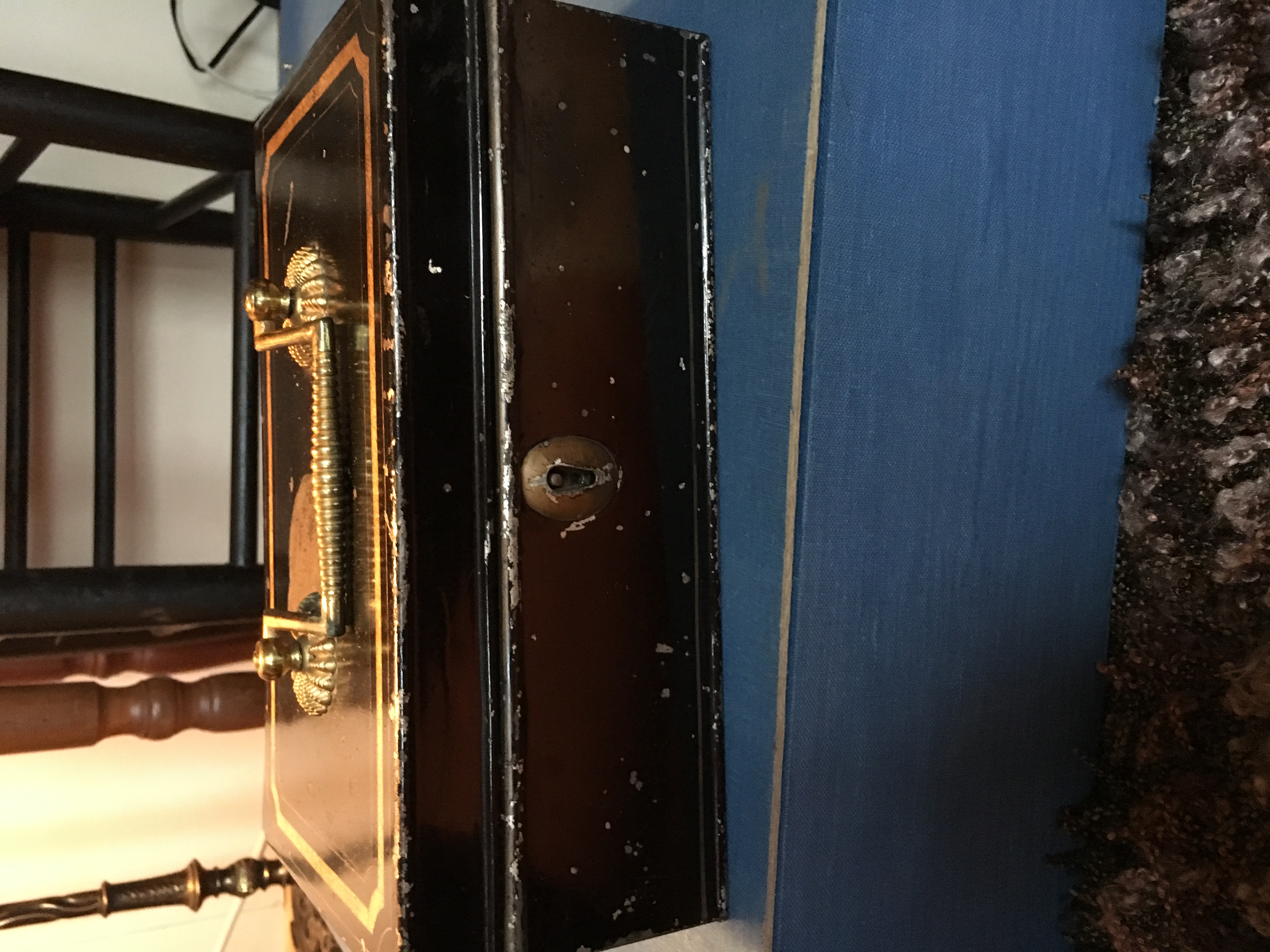 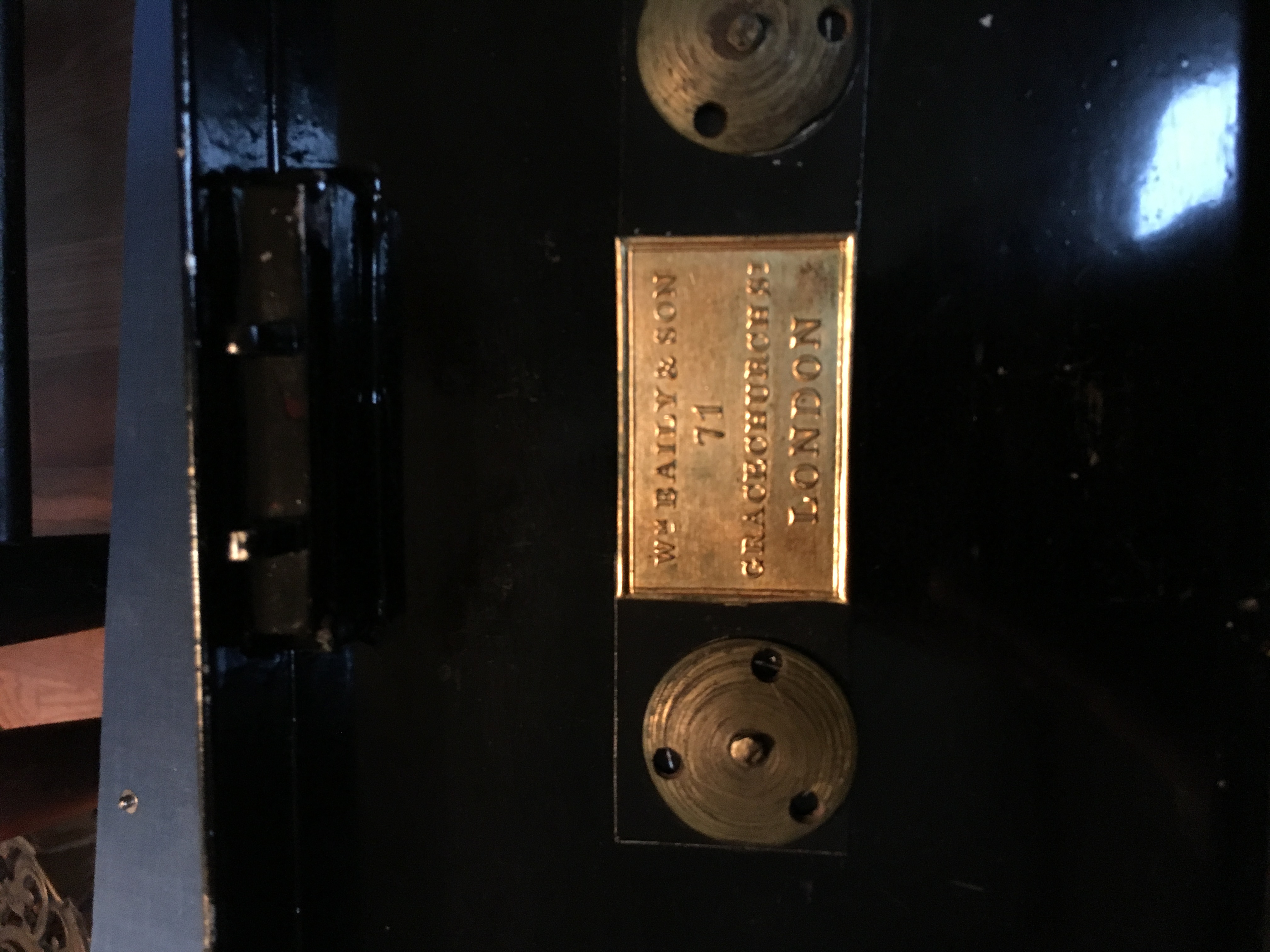 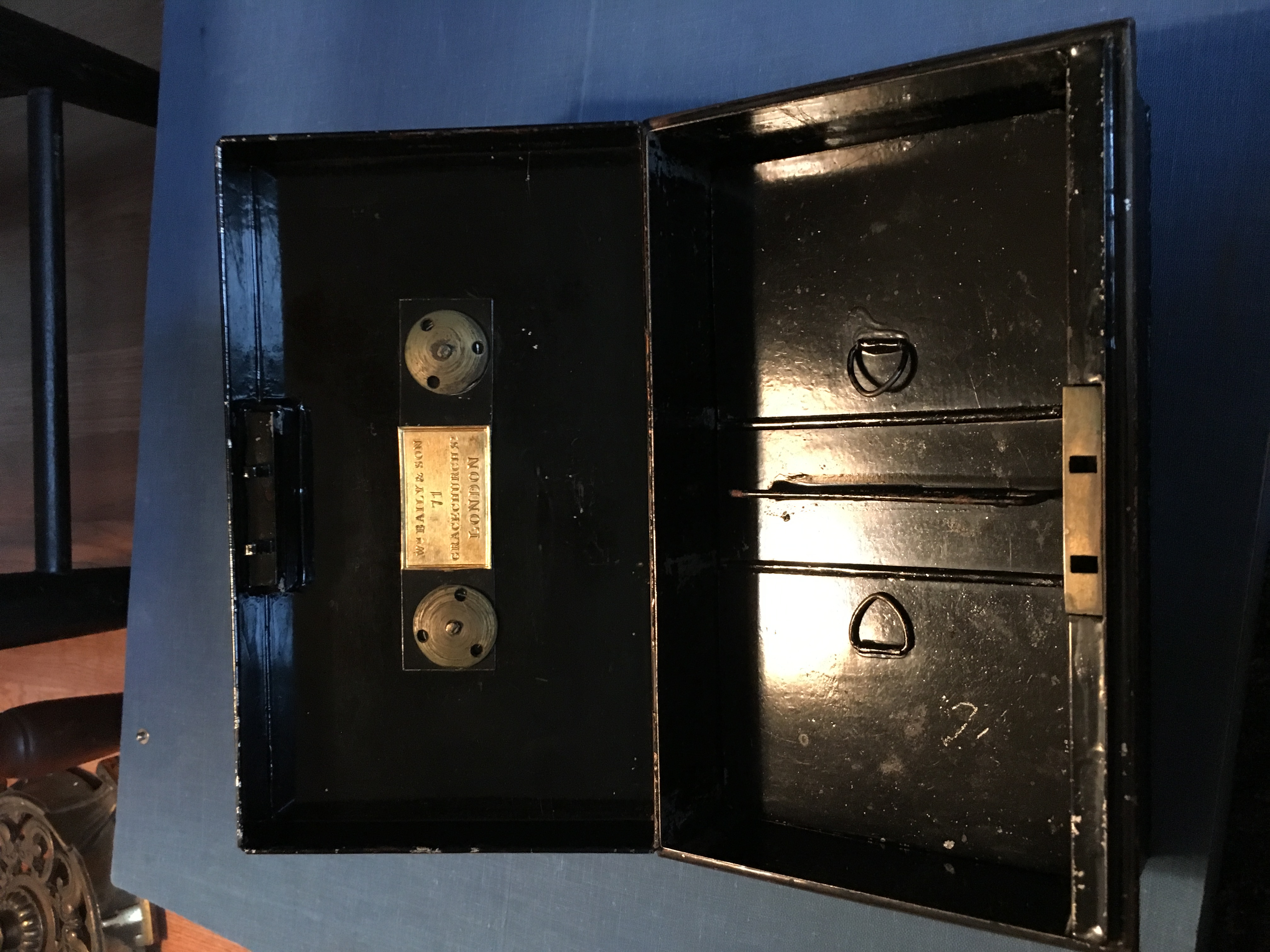 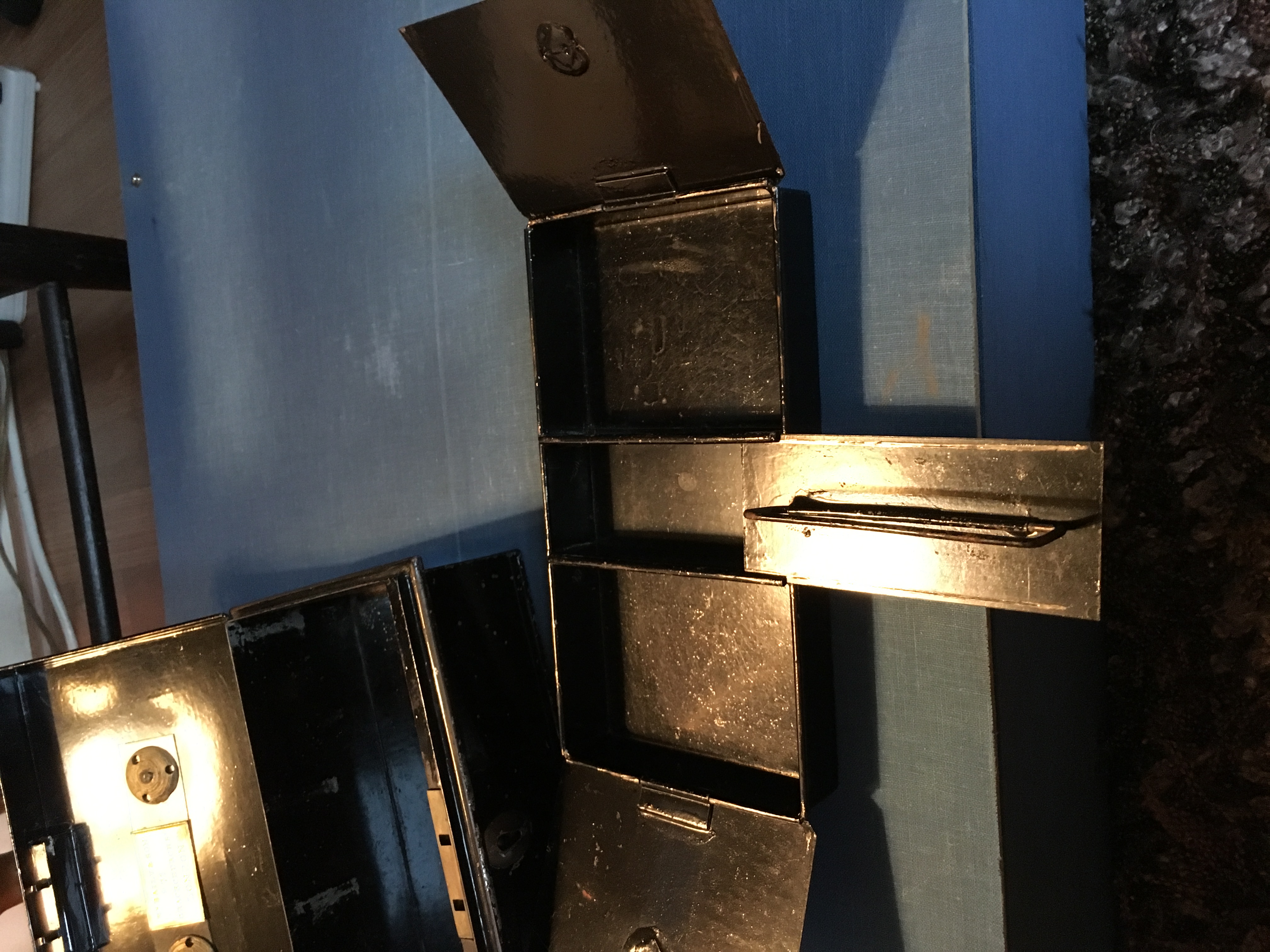 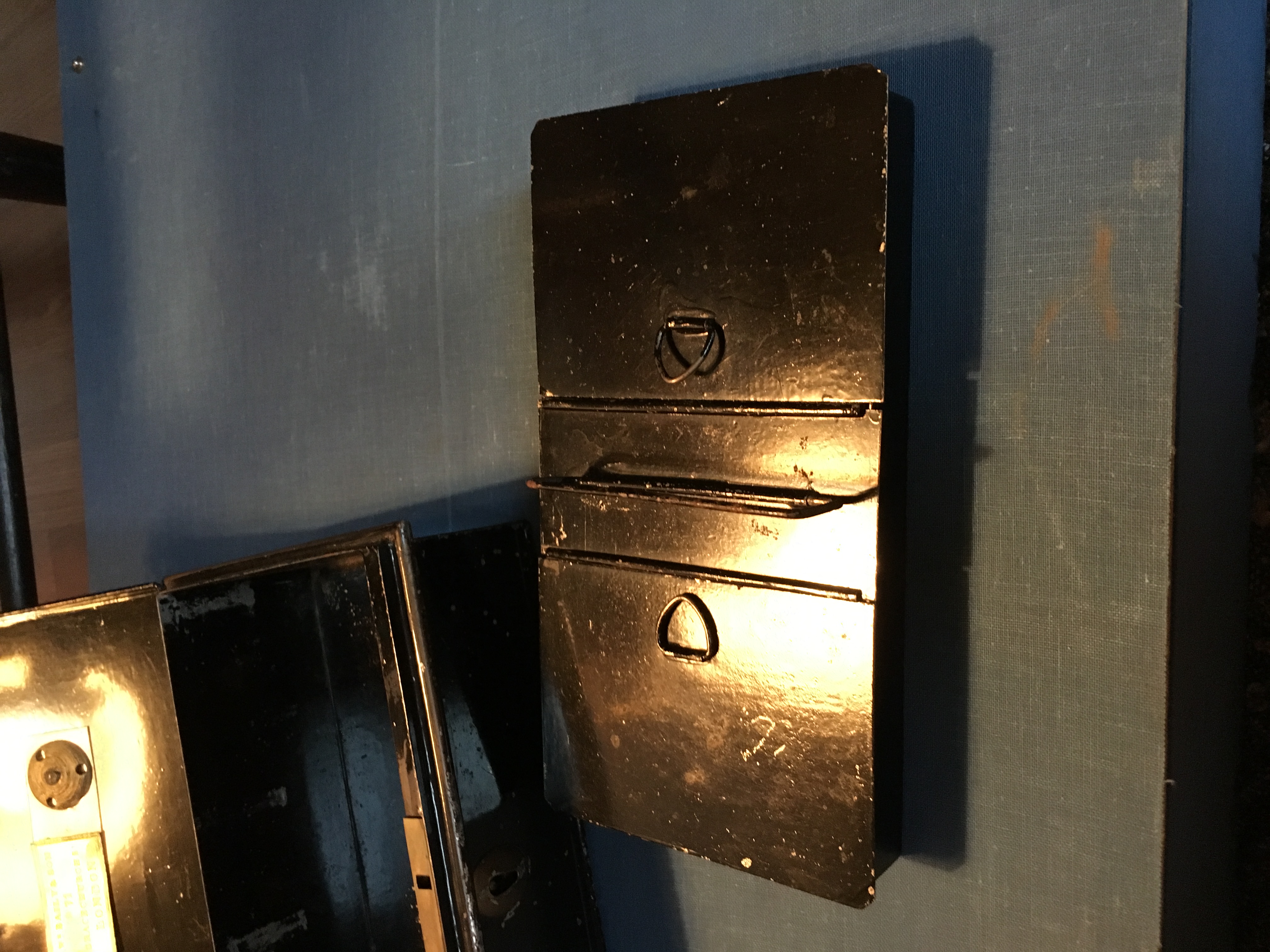 Answer on its way to you as soon as I can!

Back again and still recovering well from the drubbing I had all last week, but doing okay. Still weak and congested though.

This is a wonderful box! Made particularly splendid and distinguished by its extremely decorative handle. I've never seen a strong box, or a document box, with such a beautiful handle.

This name William Baily is quite an unusual spelling of that particular last name, so he's quite easy to check on.

Wm Baily of 71, Gracechurch St, London, is/was actually listed as one of the exhibitors at the Great Exhibition in London in 1851, the one for which the famous Crystal Palace was constructed to house, The Crystal Palace was a greenhouse so big it enclosed mature elm trees and covered no fewer than 19 acres of Hyde Park. After the Great Exhibition it was taken down and moved to another location in south London (at Sydenham) where it covered even more acreage. The Crystal Palace was designed by Sir Joseph Paxton who was my son Tommy's four greats grandfather (but then I'm starting to brag now).

For William Baily, being an exhibitor at the great exhibition was a big deal. It was opened with much pomp and pageantry by Queen Victoria and six million people visited -a staggering number for the time- and would have seen his metalwork, although he was in the company of myriads, one of over 15,000 contributors. There were some 100,000 objects on display, ranged along more than ten miles of exhibits on several floors. He was listed under "General Hardware Including Locks and Grates" and located on the Main Avenue, West.

The pieces he exhibited apparently included:

How great to think that the maker of your box was there all those years ago, and that gives it great history and interest, even though William Baily's ventures in decorative metalwork don't seem to have amounted to much, though there are records of some of the fire surrounds, covers and stoves he made.

I would say that in a smart antique store in London this box would have a price tag of $300 which is what I should insure it for.

Verified
Robert S. and 87 other Antiques Specialists are ready to help you
Ask your own question now
Customer reply replied 4 years ago
Wow your kidding. Is this where your son got his desire to be an architect? Is it in his blood like a DNA would be? How awesome is that. Is Tommy the one in London now? I don't have a key do you? I wonder if I could ever find a key. Would any skeleton key work? I called it a strong box and the inside container is so very cool. The part with the ring on it slides open like a hidden treasure area. It's so very cool. I assume the handle has to be some kind of brass, there is some green patina around the handle and the paint has been chipped off or somehow worn off to where the top of the box has a bit of rust I think. Anyway, I found it so very private in that slider, to where I kept loose diamonds in a bag in that spot. I have been a gem collector for 9 yrs now. And love loose gems. It use to house a 35 carat amethyst emerald cut. It was 50 carats but chipped where someone ripped it out of a piece jewelry for the metal. I sent it to NY and had it recut, I gave it to my sister last year for her birthday. Which is Feb 18. So I used the box for hiding this gem. Lol this box belongs in London. Im surprised this was born in 1851, who would have guessed that. And it's in Michigan. Well over 100 yrs. I understand 100 yrs for furniture and 50 for jewelry so where does a 166 yr old box fit in as an antique.

A specialist locksmith could make you a key for that lock. It might not be as pretty looking as the original was, but it would work.

Having said that, it's usually a good thing the key is missing as so many boxes like yours are locked and put away and no-one knows where the key is any more, so the box gets destroyed by being forced open. Mind you, if they were to find a bunch of loose diamonds and a 35 carat amethyst (wow!) then it would be worth it.

Yes, Tommy clearly has architect ink in his veins and his DNA. He always wanted to design things. His Lego creations were out of this world. I wish I'd kept some of them. Wonderful to think he's helping to build skyscrapers in London right now and goes to work every day on his bicycle through the very park, Hyde Park, where The Crystal Palace once stood. I'm very proud of him.

Customer reply replied 4 years ago
Wow, You should be proud of him. Imagine how he looks at pieces of land and sees a dream everytime. I did land title, I was a 40 yr acreage examiner and in doing this job I met my very dear friend Don, he's an architect, residential. He draws some beautiful homes, he will be 70 Thursday, he drags me through all of his builds while being built and you can see his vision in his eyes. It's great to be apart of that moment of creativeness. Tommy is a lucky man, to be apart of that park everyday and on a bike, perfect place to clear your mind and refresh every morning. Does he know the story?

Oh yes! He knows the story! Joseph Paxton loosely based the engineering design of The Crystal Palace on the structure of the underside of a leaf of the giant water lily Victoria amazonica. He then showed how sturdy it was by placing his daughter Annie Paxton on the leaf (this is a re-enactment, they did not have a photo of this event back then, but this is how the Illustrated London News portrayed it at the time) and proving it would hold her weight.

Annie is/was Tommy's grandfather's grandmother. Joseph Paxton was master gardener and later CEO to the Duke of Devonshire, he merely designed greenhouses 'in his spare time'. His greatest contribution to civilization is the invention of the modern banana. Virtually every banana consumed in the western world today can be traced back to one that Paxton bred for his boss, William Cavendish, the Duke of Devonshire in the greenhouses of Chatsworth back in the 1840s. Paxton called it Musa cavendishii after the Duke. It's still grown all over the world today where it makes up 99% of the world's banana export market.

Nice to know that at least some good did trickle down from the eccentricities of 19th century billionaire aristocrats and their genius accomplices.

Frank
Antiques and Collectibles Researcher
Bachelor's Degree
5,970 satisfied customers
Show more
Disclaimer: Information in questions answers, and Show More
Disclaimer: Information in questions, answers, and other posts on this site ("Posts") comes from individual users, not JustAnswer; JustAnswer is not responsible for Posts. Posts are for general information, are not intended to substitute for informed professional advice (medical, legal, veterinary, financial, etc.), or to establish a professional-client relationship. The site and services are provided "as is" with no warranty or representations by JustAnswer regarding the qualifications of Experts. To see what credentials have been verified by a third-party service, please click on the "Verified" symbol in some Experts' profiles. JustAnswer is not intended or designed for EMERGENCY questions which should be directed immediately by telephone or in-person to qualified professionals.