I have an original Berkey & Gay bedroom set that I inherited…

Hi I have an original...
Hi I have an original Berkey & Gay bedroom set that I inherited from my aunt about 20 years ago. I suspect she and her husband purchased it sometime in the 1940s. It consists of a full size bed, single nightstand, 2-drawer dresser with vanity bench and full size mirror. I had glass tops made for the dresser and nightstand stand. It is in excellent condition condition but very little wear. This set was taken very good care of by my aunt and subsequently by myself. There is a floral insert on the foot ofor the bed, the nightstand and the dresser. The seat on the vanity bench is not worn or thread bare. I have not allowed anyone to sit on the bench so it is very sturdy. As we have moved to the Texas Gulf Coast I have decided to try to sell this beautiful bedroom set and use this space for a bed that I would allow our guest to sleep on. Thank you for your expert opinion as to what it might sell for. Regards, *****
Show More
Show Less
Ask Your Own Antiques Question 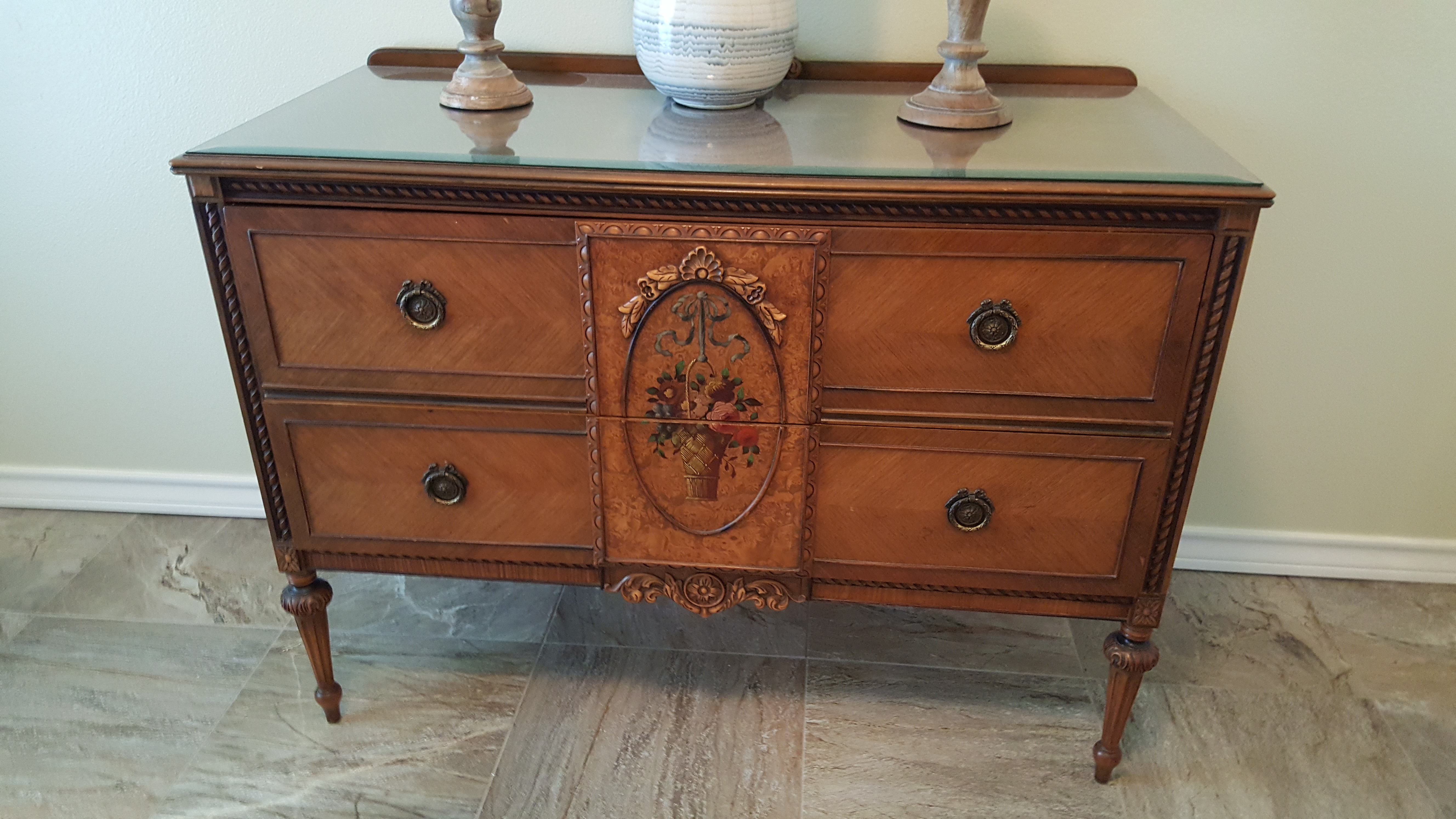 Hello and welcome! My name is Doris.
I have been an antiques and art collector as well as dealer and appraiser for over 56 years.
I will be pleased to help you. Please know I do not send pop-ups. Thoughtful responses take time.

Please allow me time to research the data required by your question, calculate current values and write my answer.

I may need to ask further details about your item or request photos before I can give an informed final answer.

I thank you in advance for your patience.

1874: New six-story factory, with wholesale and retail showrooms, becomes one of Grand Rapids’ most prominent structures.

1876: Berkey & Gay is one of three Grand Rapids companies to win an award for its display at the Philadelphia Centennial Exposition.

1885: Firm advertises nationally, and ships over a half million dollars in goods through out the U.S. and Europe.

1934: Stockholders win $2,000,000 judgment in suit against Simmons, then the largest civil award in history.

"1915 – 1931: The era between World War I and the Great Depression was Berkey & Gay’s zenith of production. Upholstering was spun off to subsidiaries like Wallace Upholstery and Grand Rapids Upholstery, so Berkey & Gay concentrated on living room and bedroom suites. Although designs ran the gamut of freely translated European and American revival styles, most tended toward larger, heavier periods like Elizabet*****, ***** and Mary, and American Empire.

Pieces were well constructed. A variety of woods was used, mostly dark mahoganies and walnuts, with occasional accents of lighter woods, painted decoration, or exotic materials like turquoise. These were further darkened by the application of stains wiped around edges and carvings, to give the appearance of age."

Your 19thC Italian style bedroom set would have an estimated retail value of $3800-4200 assuming good condition and depending on sale geographic location.

These sites carry antique as well as vintage items.
Accept PayPal only.

These sites are excellent and more upscale but fees are higher. I only recommend them if you have several items to sell.
GoAntiques.com
Rubylane.com
Tias.com
cyberattic.com
trocadero.com

Or your nearest CraigsList.com where you can list items for free. Accept cash only.

In general, a private seller to a dealer, via consignment or at auction can expect 30-50% of estimated retail value.

Insurance replacement values are usually about 20% more than retail values.

Please take a little time to give me a POSITIVE RATING NOW SO THAT I AM CREDITED BY JA for my knowledge, time and effort.

Please do not rate me down because of system difficulty.

Please let me know if you have difficulty with the site's rating system. To rate me, you should see 5 stars near my answer. 5 stars gives me the best rating.

If you would like to use me on any future questions, requesting me expires in a short time. If you put "For Doris Only" as the first of three words of the question, most professionals on the site will respect that request.

Customer reply replied 5 years ago
Posted by JustAnswer at customer's request) Hello. I would like to request the following Expert Service(s) from you: Live Phone Call. Let me know if you need more information, or send me the service offer(s) so we can proceed.
Customer reply replied 5 years ago
Hello Doris I hope your received my previous message regarding my satisfaction with your quote and the information provided. When I finished I intended to press the send button but it appears that I may have requested a phone call. Your answer was quite clear and you provided a very detailed answer. Therein. I do not need a phone call. I spoke with your Customer Service Department who explained how to cancel that request and that I should not be charged. I appreciate your assistance and will definitely request your services again. Kind regards *****

Danna, I am glad you were able to cancel the phone request. I did not send the pop-up about the phone call.

I am pleased you are satisfied with my assessment.

There's one more item I request from you:

I am only credited by JA for my work on this question if you rate my answer positively, using the star system at the top of the screen. Please do not forget! Thank you.

Verified
Doris and 87 other Antiques Specialists are ready to help you
Ask your own question now
Was this answer helpful?
Yes
No

Rarewares
Expert Appraiser/Antiques Dealer
98,801 satisfied customers
What would a Thomasville bedroom set be worth? It it's a
It it's a bedroom set, 2 nightstands, makeup vanity with mirror, dresser and full size bed frame. at least 50 years old … read more

Glenda B.
Antique Appraiser
College
38,695 satisfied customers
Show more
Disclaimer: Information in questions answers, and Show Less
Disclaimer: Information in questions, answers, and other posts on this site ("Posts") comes from individual users, not JustAnswer; JustAnswer is not responsible for Posts. Posts are for general information, are not intended to substitute for informed professional advice (medical, legal, veterinary, financial, etc.), or to establish a professional-client relationship. The site and services are provided "as is" with no warranty or representations by JustAnswer regarding the qualifications of Experts. To see what credentials have been verified by a third-party service, please click on the "Verified" symbol in some Experts' profiles. JustAnswer is not intended or designed for EMERGENCY questions which should be directed immediately by telephone or in-person to qualified professionals.