S only. Macau Ginger Jars and Bowl? Are these both the type…

For Robert S only. Macau...
For Robert S only. Macau Ginger Jars and Bowl? Are these both the type of porcelain that was sent to Macau for painting? Also want to know what is going on in the scenes on the Ginger Jars and what the strange mark is in gold by the rim of the bowl (both on outside and inside). The bowl is heavy and 9" across the top. The jars are about 10 3/4 inches high.
Show More
Show Less
Ask Your Own Antiques Question 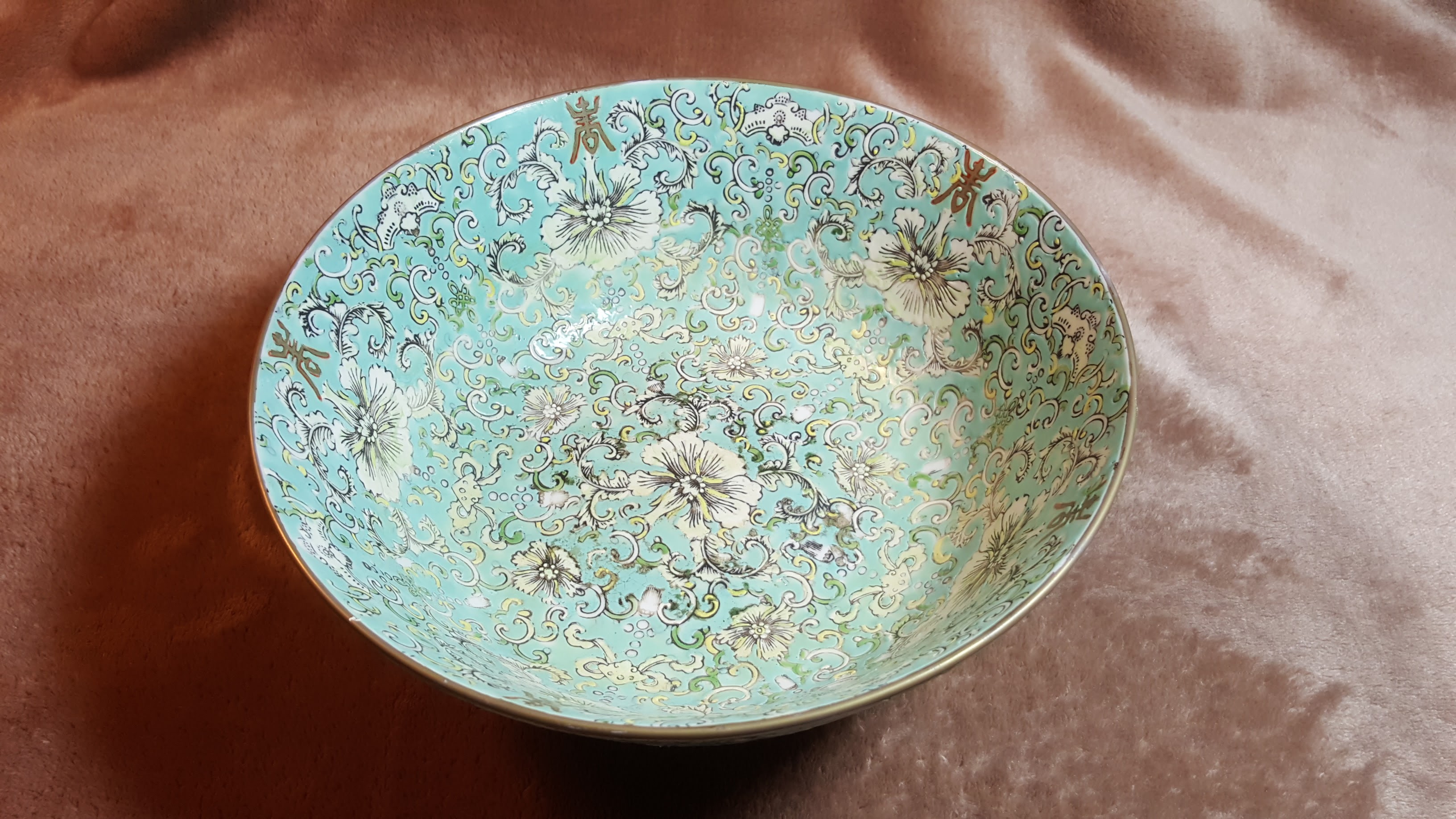 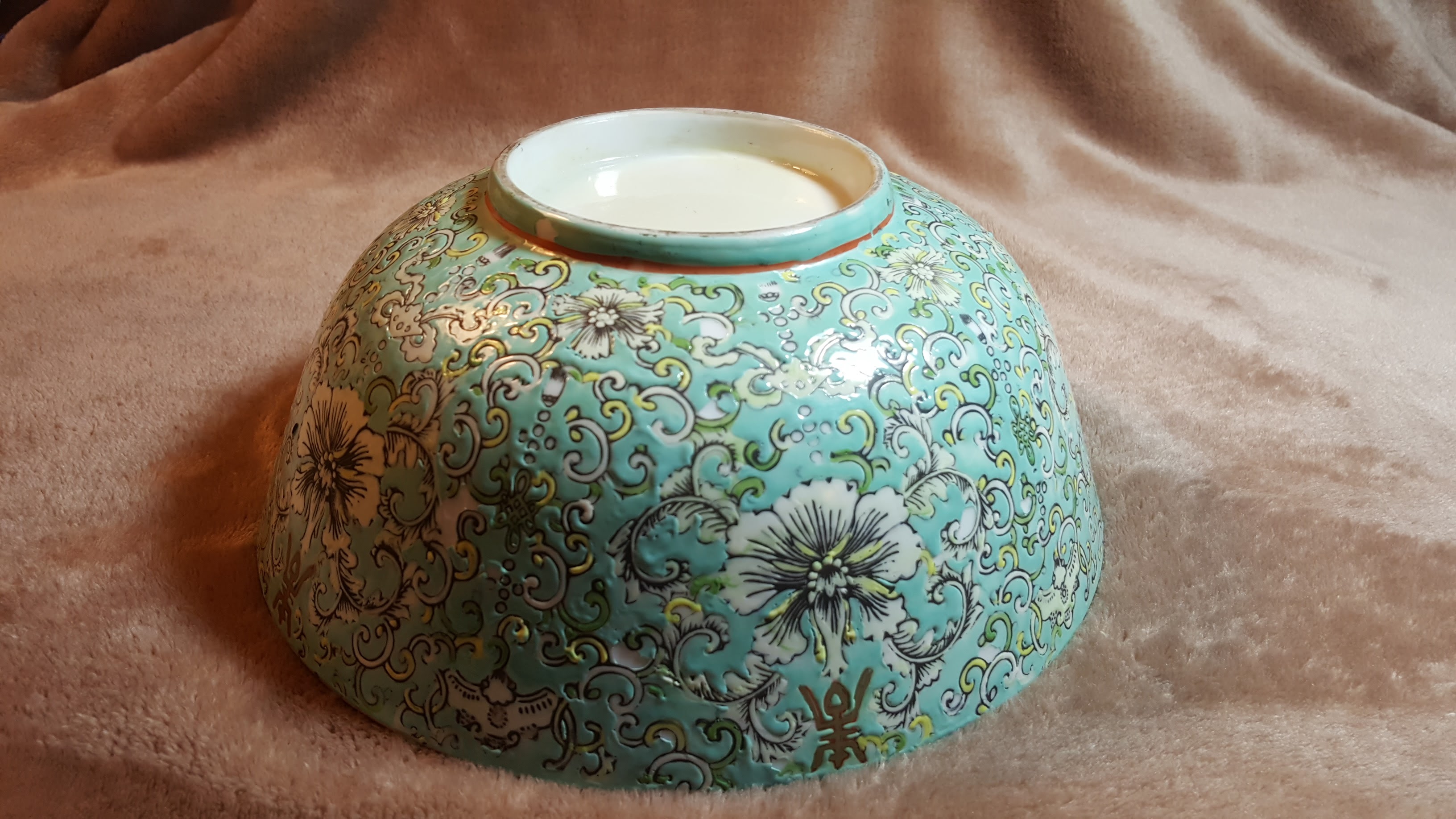 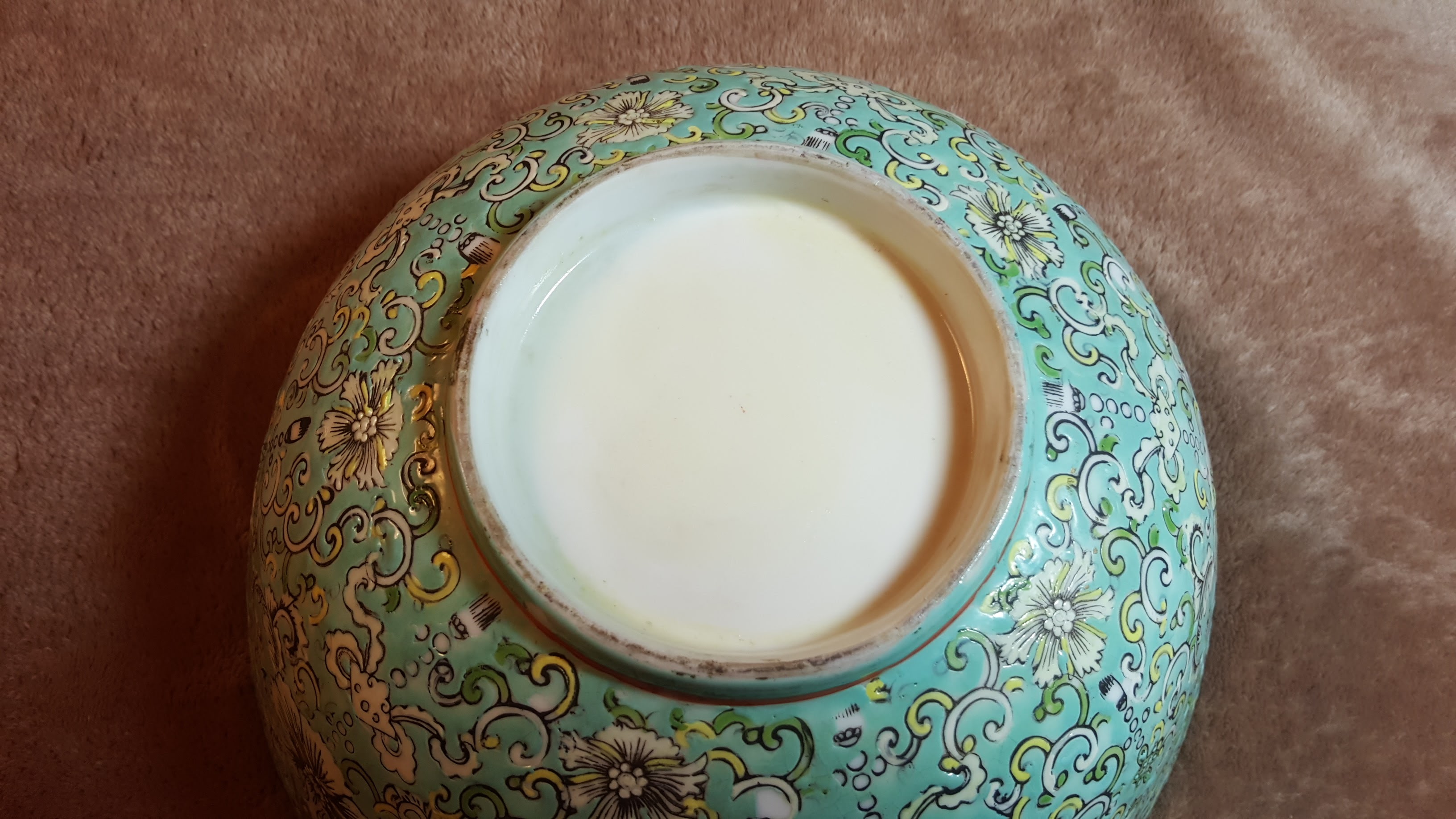 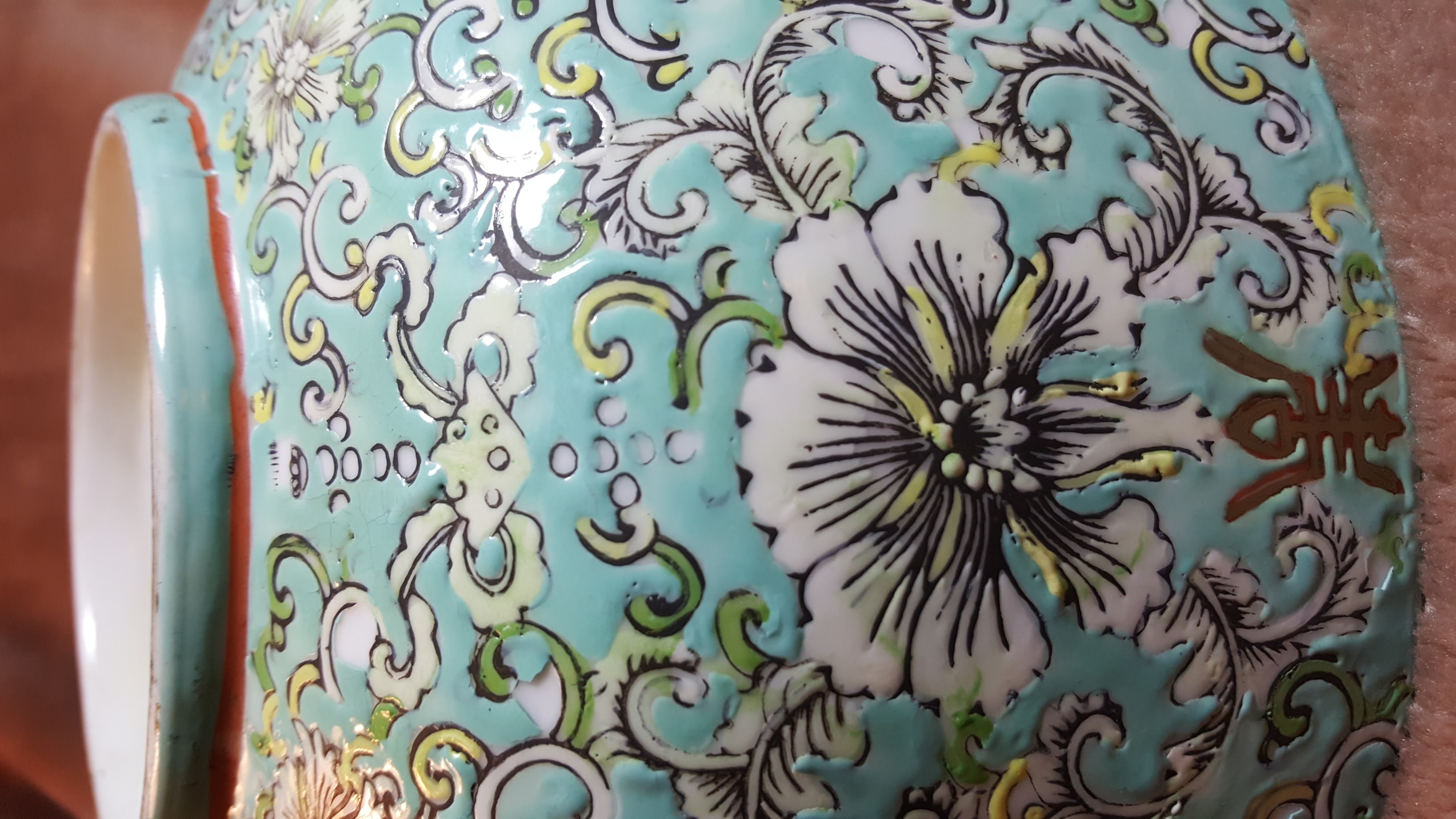 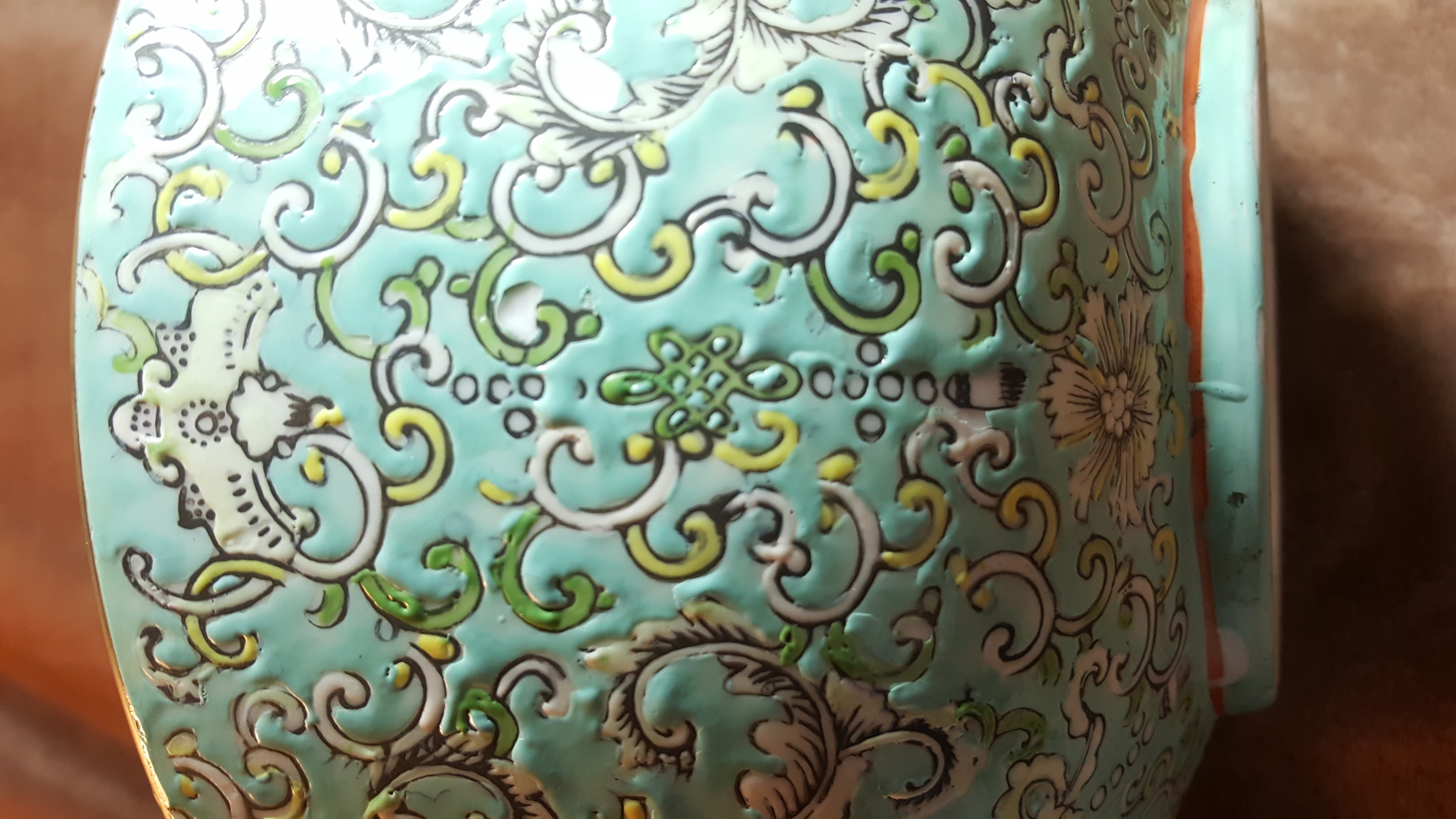 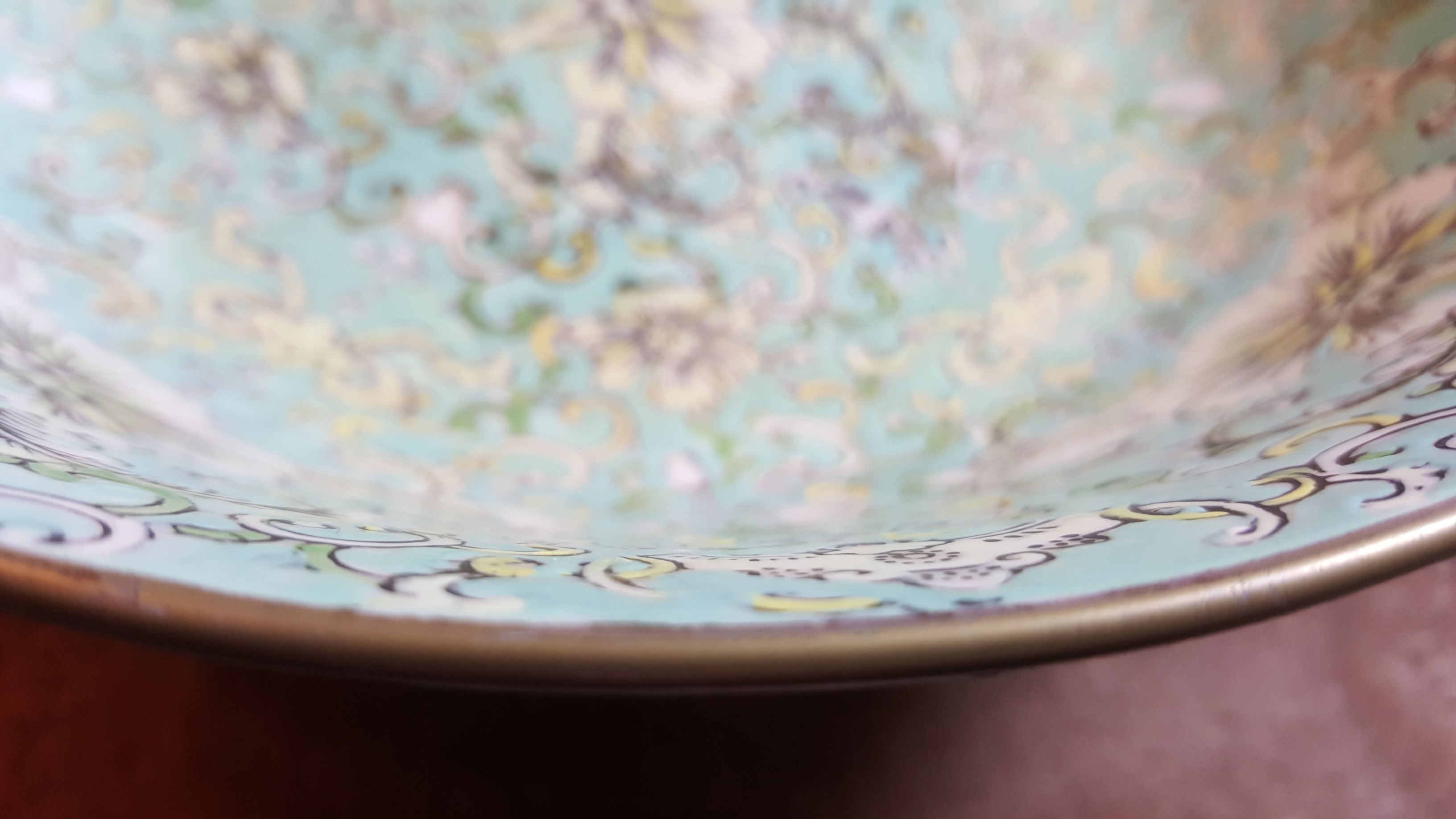 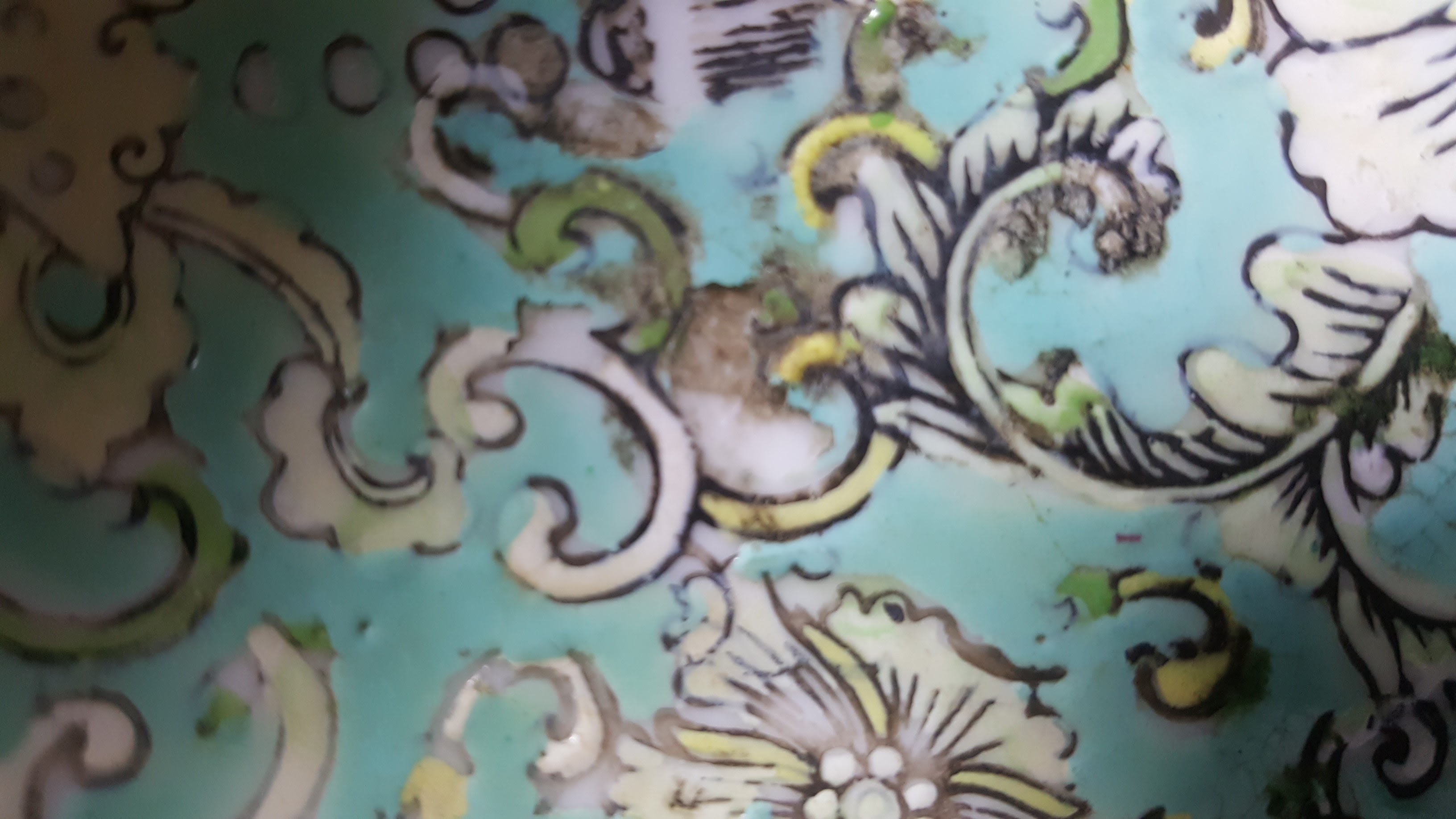 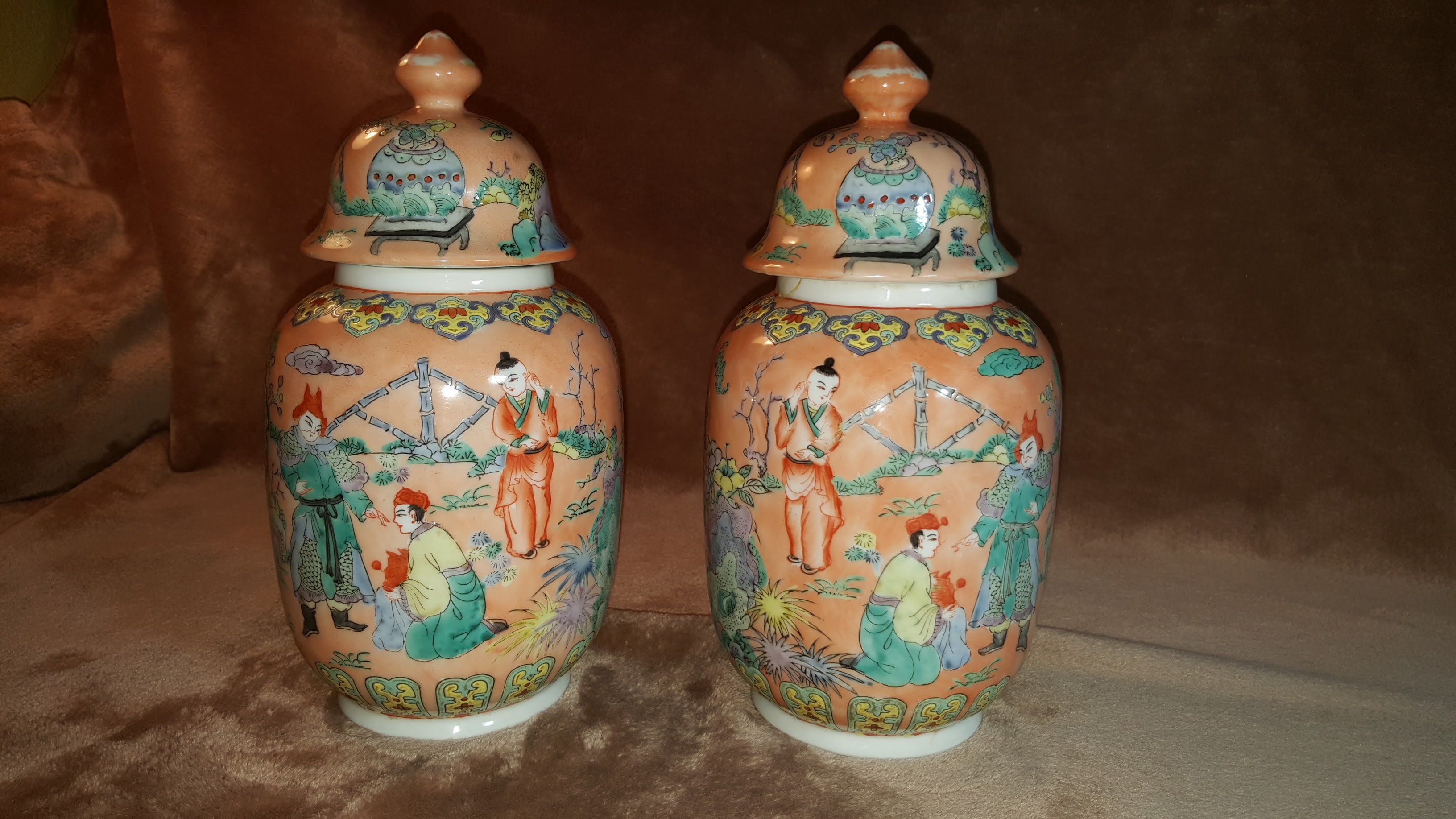 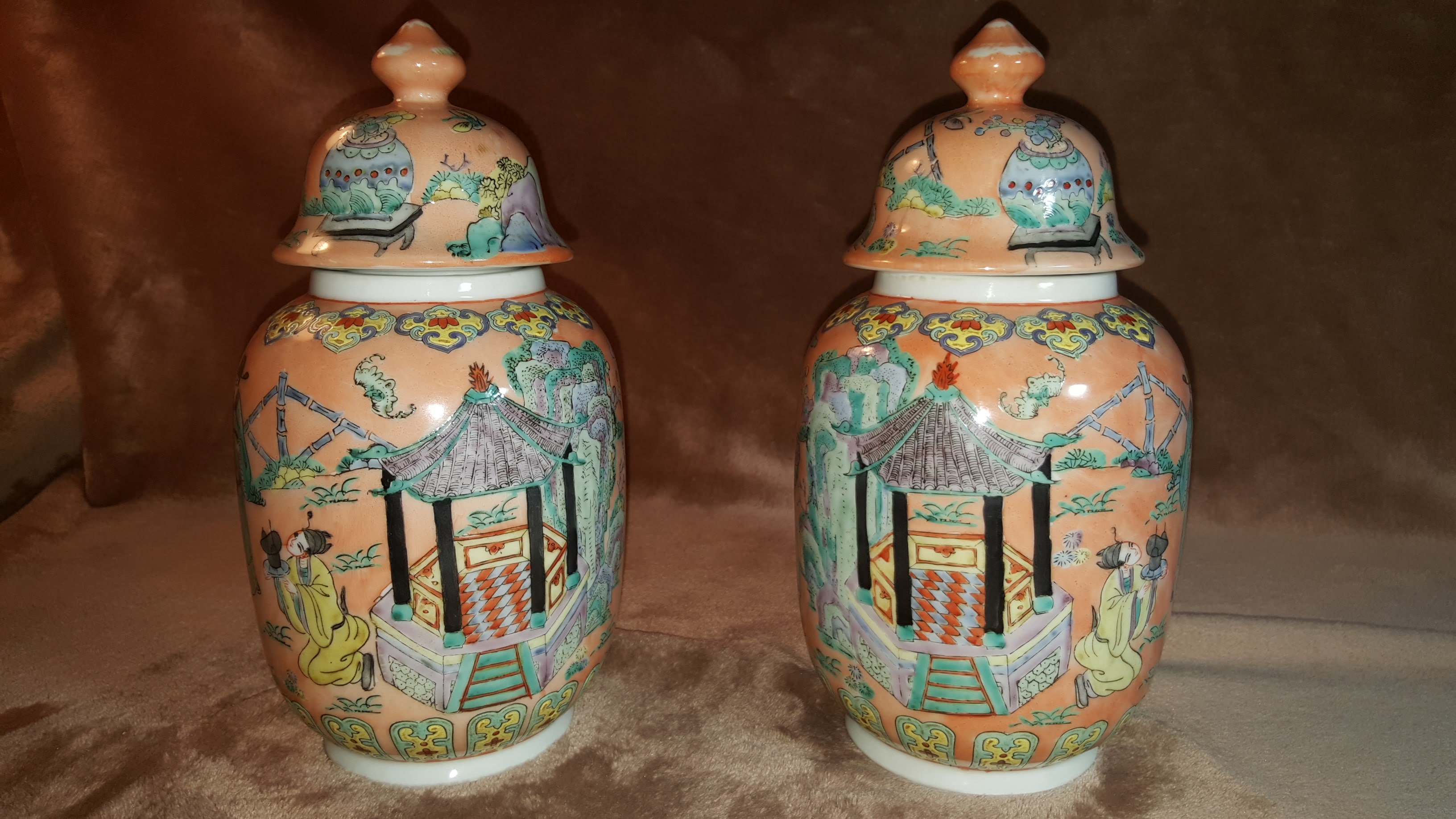 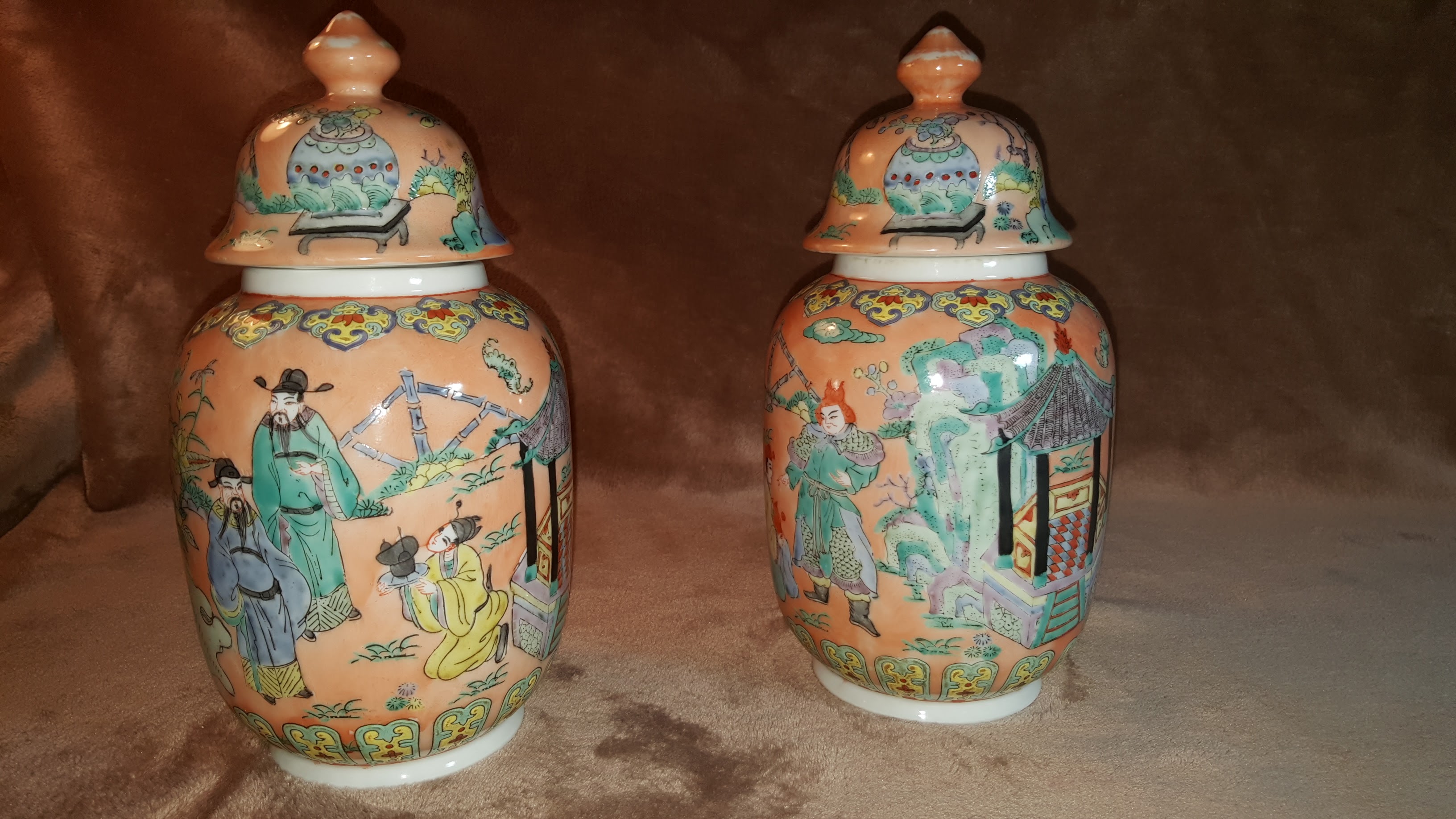 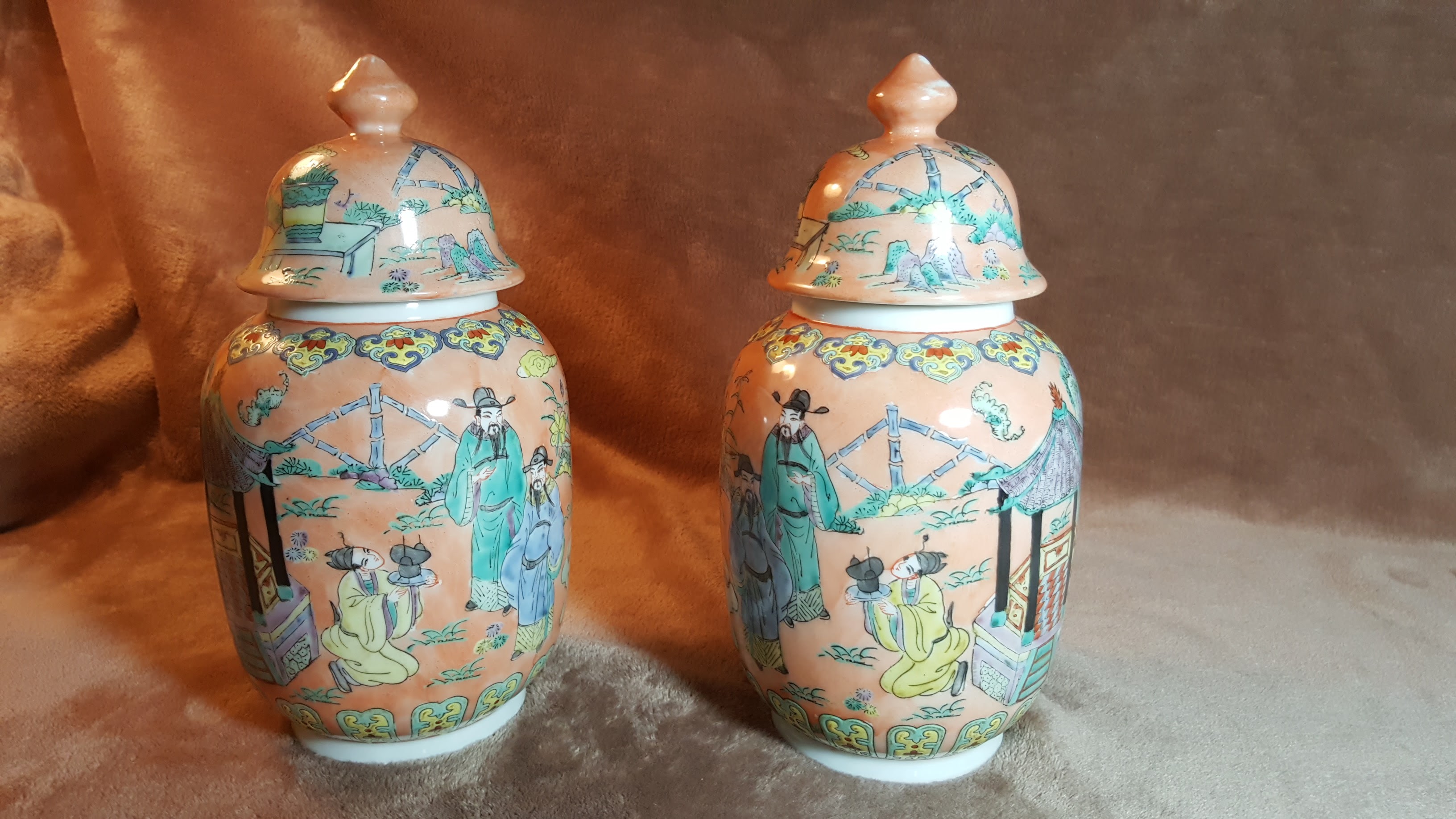 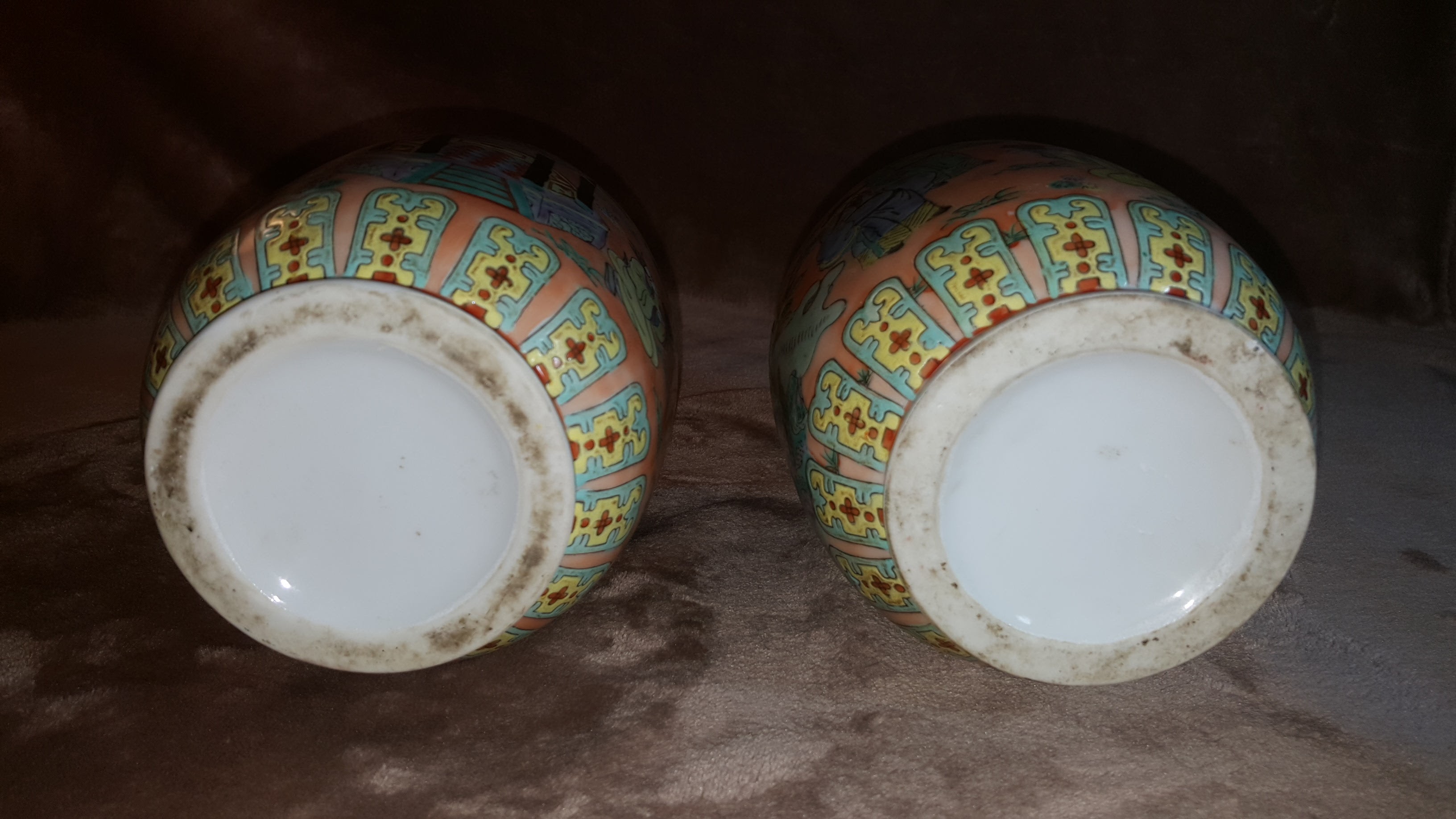 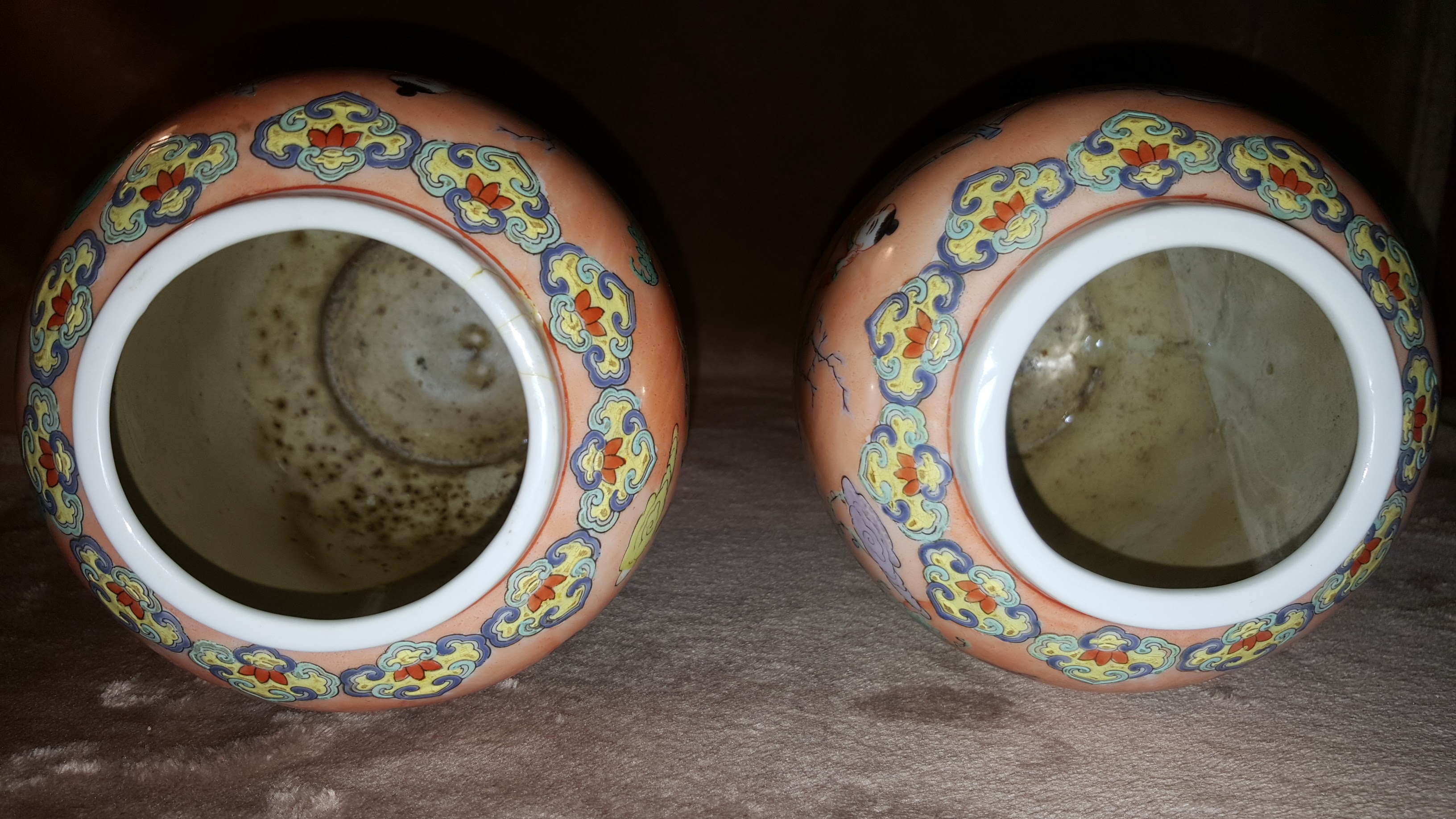 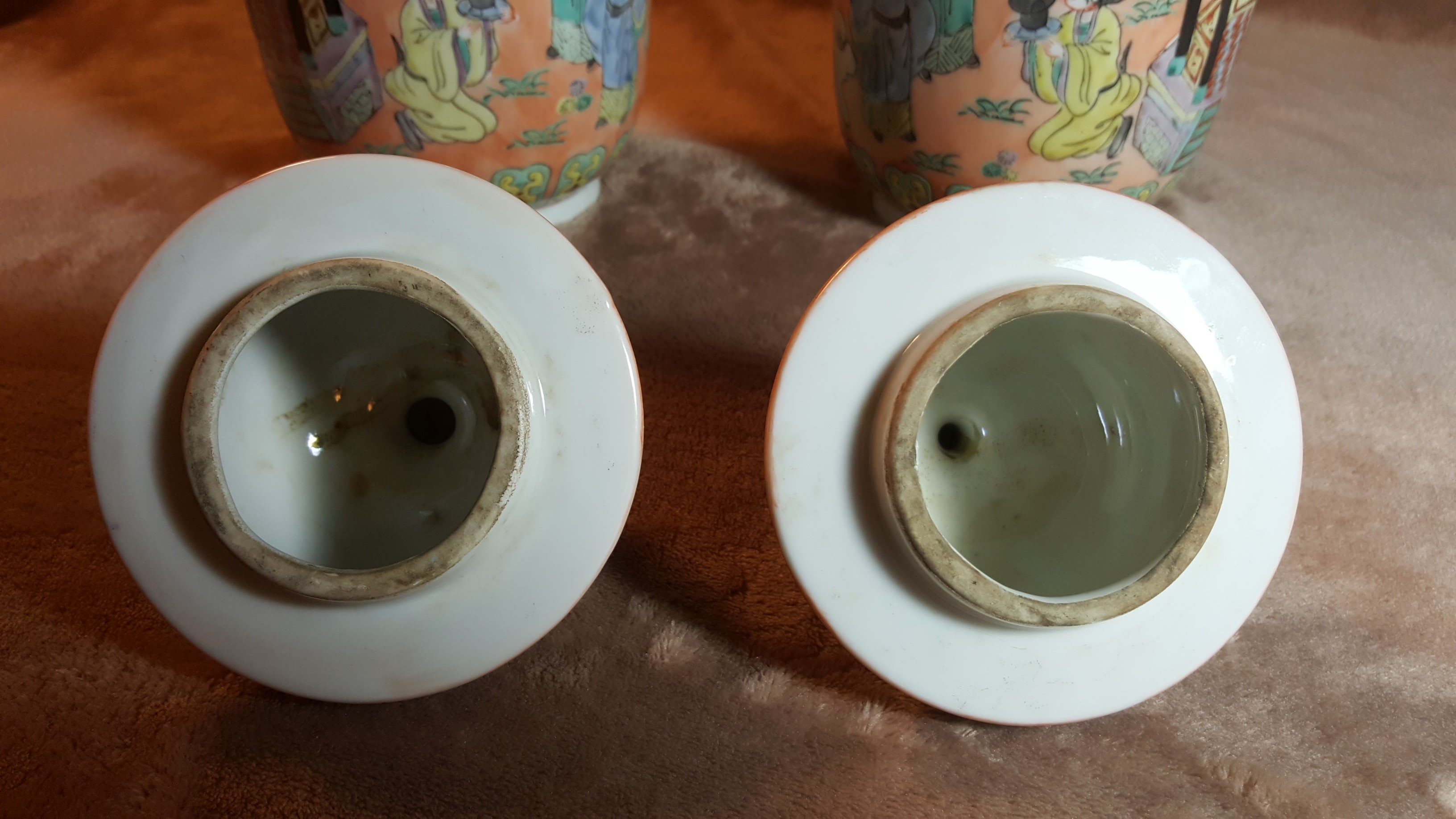 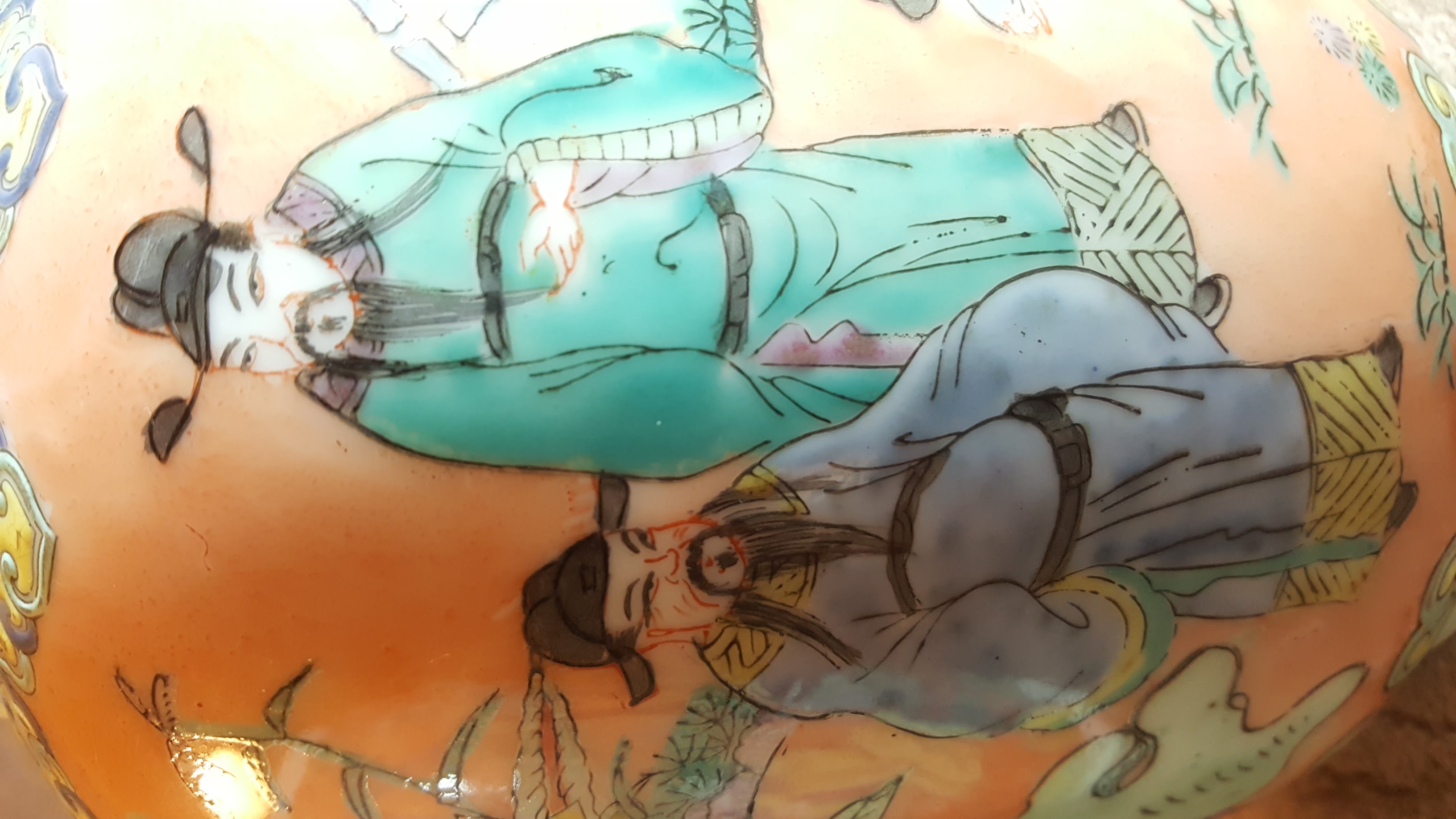 Just letting you know I got this one, thanks.

Will have an answer for you in the morning.

Customer reply replied 4 years ago
No hurry. Also sending a yixing teapot collection of 5 (will request a call to go over them once I've given you time to review).

I do like this bowl. It's a classic example of famille rose or fencai enamels, applied as thick opaque pigments, held in place by an outline of the design in grisaille that's carved into the leather-hard clay before firing, a style that has its roots in 17th century Chinese cloisonné enamel which it vaguely resembles. It's also reminiscent of French faience decoration produced at Longwy -a similarity that's far from a coincidence. The enamel pigments and techniques for this were originally introduced to China by Jesuit missionary artists from France invited by the emperor during the latter part of the Kangxi reign (1662-1722). Nice to know that the West taught the East at least something about the decorative arts.

The motifs on your bowl are the stylized flowers and scrolling leaves of the lotus plant, ever-popular and powerful symbol of spiritual purity, and the scrolling design is known as karakusa hana.

Those five bug-like symbols around the rim are yet another variant of the lucky shou symbol for longevity.

You are quite correct about the "Macau" reference, this decoration and style has come to be known by collectors as "Macau decorated ware" because almost all of it was sold through Macau (they often have a Macau paper label as the only marking, that is removed, or falls off). However, it's highly unlikely that any of it was actually decorated there. It was made and decorated in the factories of Jingdezhen and shipped south in the normal way to be exported. Macau was chosen as a port of export by Chairman Mao during the Cultural Revolution of 1965-1975, deliberately to by-pass Hong Kong, where most Chinese porcelain exited from. This was a way to continue to create export revenue for the People's Republic but deny the profits to Hong Kong which was still, of course, under democratic British rule and which, as a free-trade colony, had long been exporting Chinese decorated porcelain without being required to repatriate any of the profits to Communist China.

This is a true pair, in other words each a mirror image of the other, always a sign of better quality than pairs that are simply superimposable copies. They date to the third quarter of the 20th century, going by the fact that the outlines of the faces are in red and the features themselves in black, a combo that seems to be specific to this time period.

The decoration is a mixture of raised paste fencai enamel and wucai (aka translucent famille verte) on a peach ground, so strictly speaking, falangcai decoration (which is fencai on a colored ground).

The figural scenes are usually inspired by passages from Chinese literature. The most popular are taken from the classic 18th century novel "Dream of the Red Chamber"

which could well be what is going on here, though which scene specifically, is way above my pay grade to be able to tell you. However, the professor of sinology at your local university would probably relish the educational benefits of setting this as a research project for his/her students to research, should you wish to delve deeper.

This pair may also be Macau porcelain, but these are usually marked with Qianlong tribute seals rather than left blank as yours are, so therefore could well be standard Hong Kong export ware.

Hope this is helpful info!

Customer reply replied 4 years ago
Thanks I have the Hawks version of that lengthy book If you will on my list to do someday.. maybe I will come across the the scene! I also like the bowl and thought both of these items had unique colors. Please respond back once more so I can close

The bowl is really nicely decorated and good value, certainly compared to the equivalent in Longwy faience, if you were to find it, which would be twice the price.

100% satisfaction guaranteeGet all the answers you need
Share this conversation
Related Antiques Questions
Trying to get value of my ginger jar. Red stamp marking on
Red stamp marking on base along with sticker "made in MACAU" … read more