S. Here you will find a picture frame, the pic in it is a…

Customer Question
Hello Robert S. Here you...
Hello Robert S. Here you will find a picture frame, the pic in it is a card. I'd like to find an old pic to go in it but haven't found a lady in 1800 clothing. And she has to be pretty. I don't want to look over and see some old hag in the frame, if I want to see that I will look in the mirror. Let me know what u know. There is some kind of trademark on the back. See it.
Submitted: 3 years ago.Category: Antiques
Show More
Show Less
Ask Your Own Antiques Question 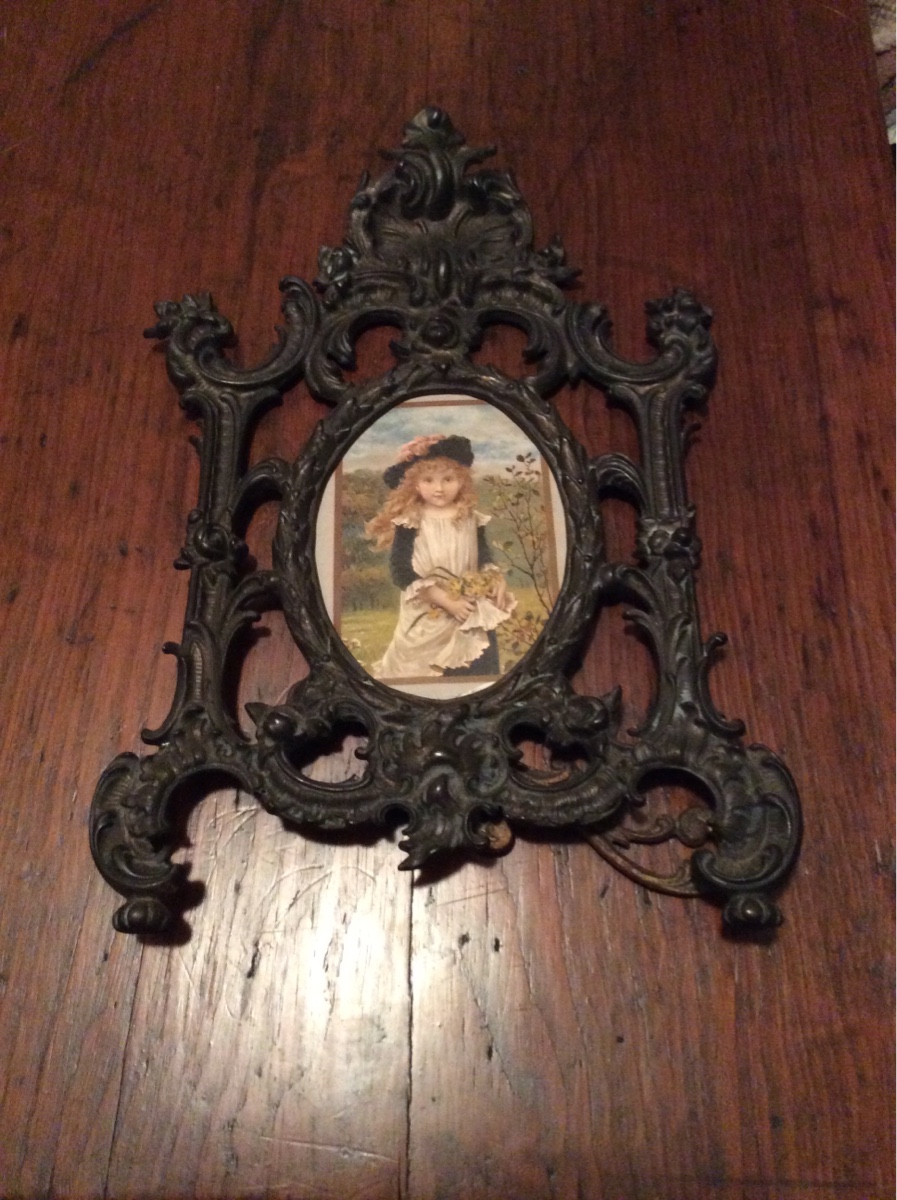 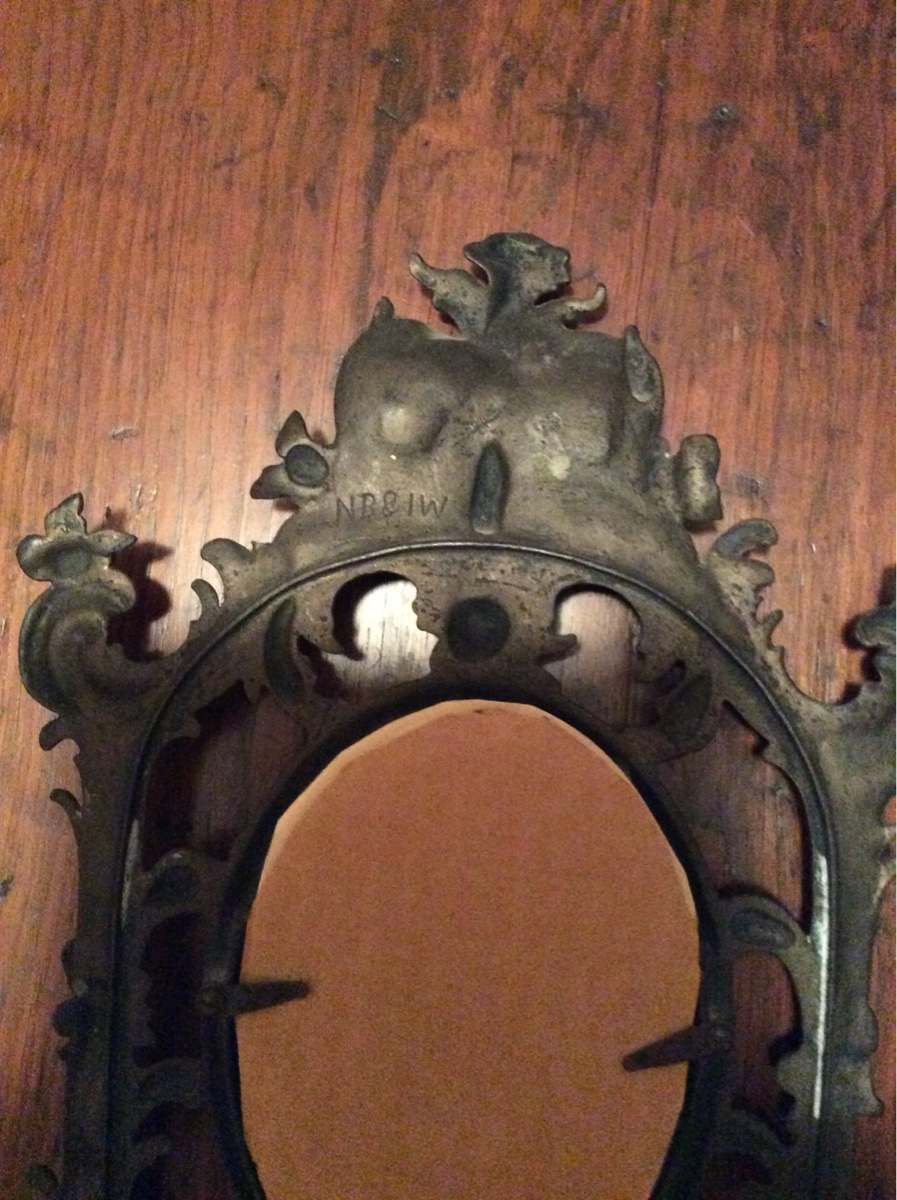 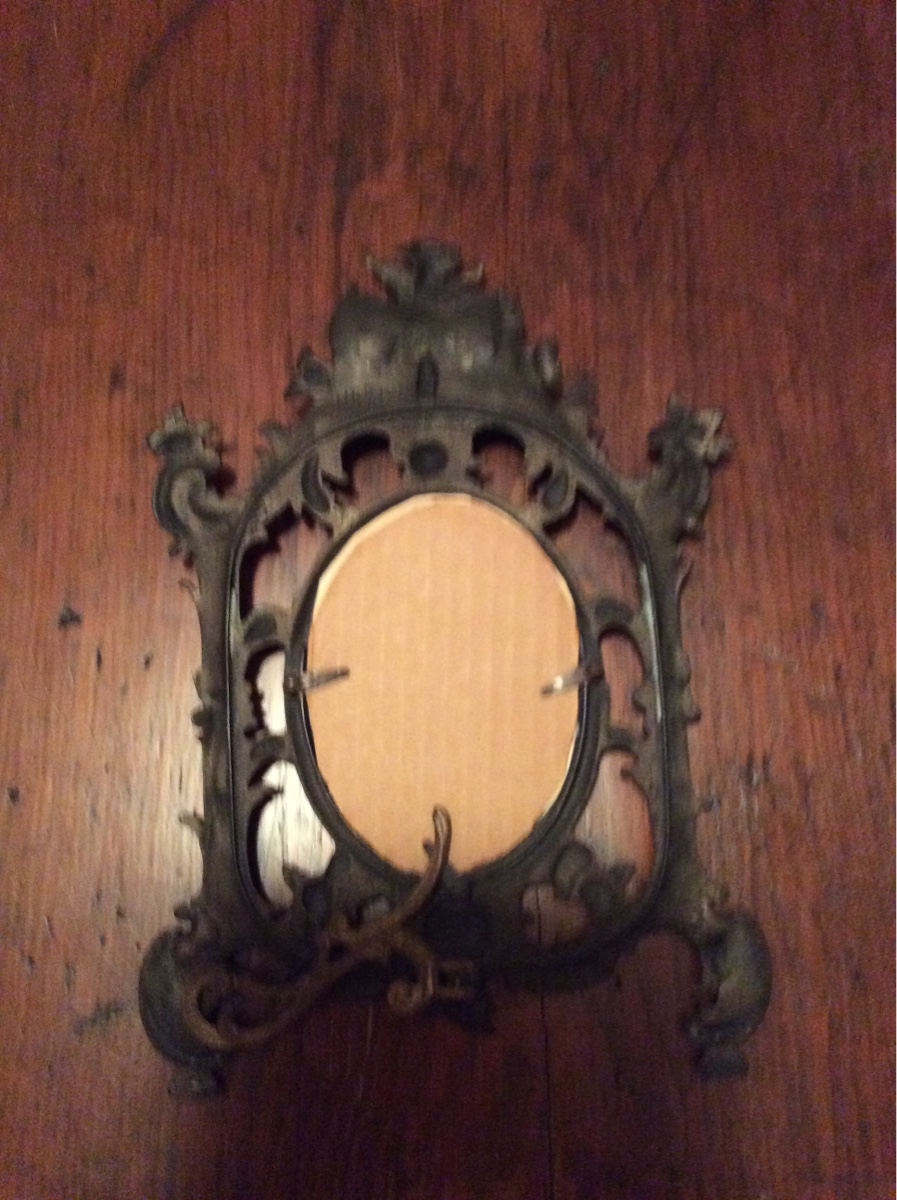 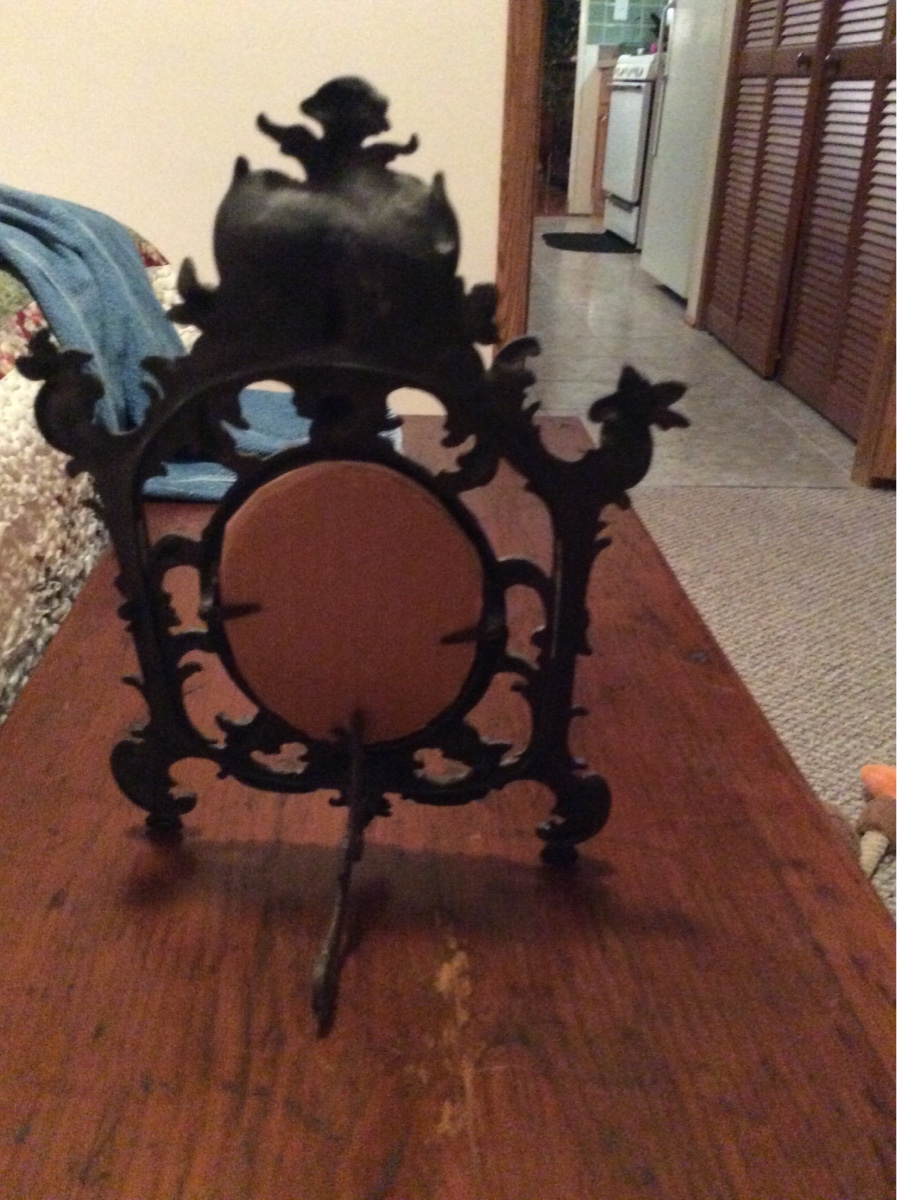 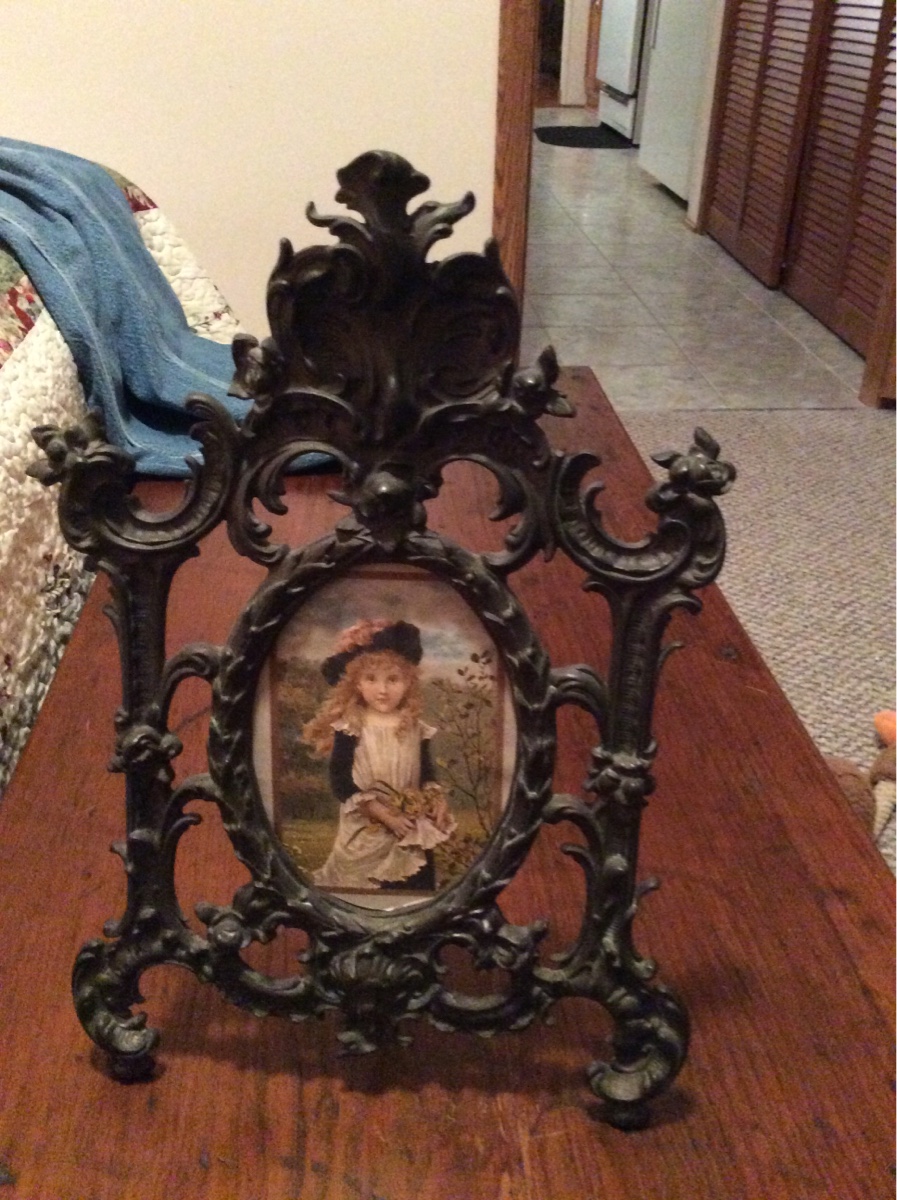 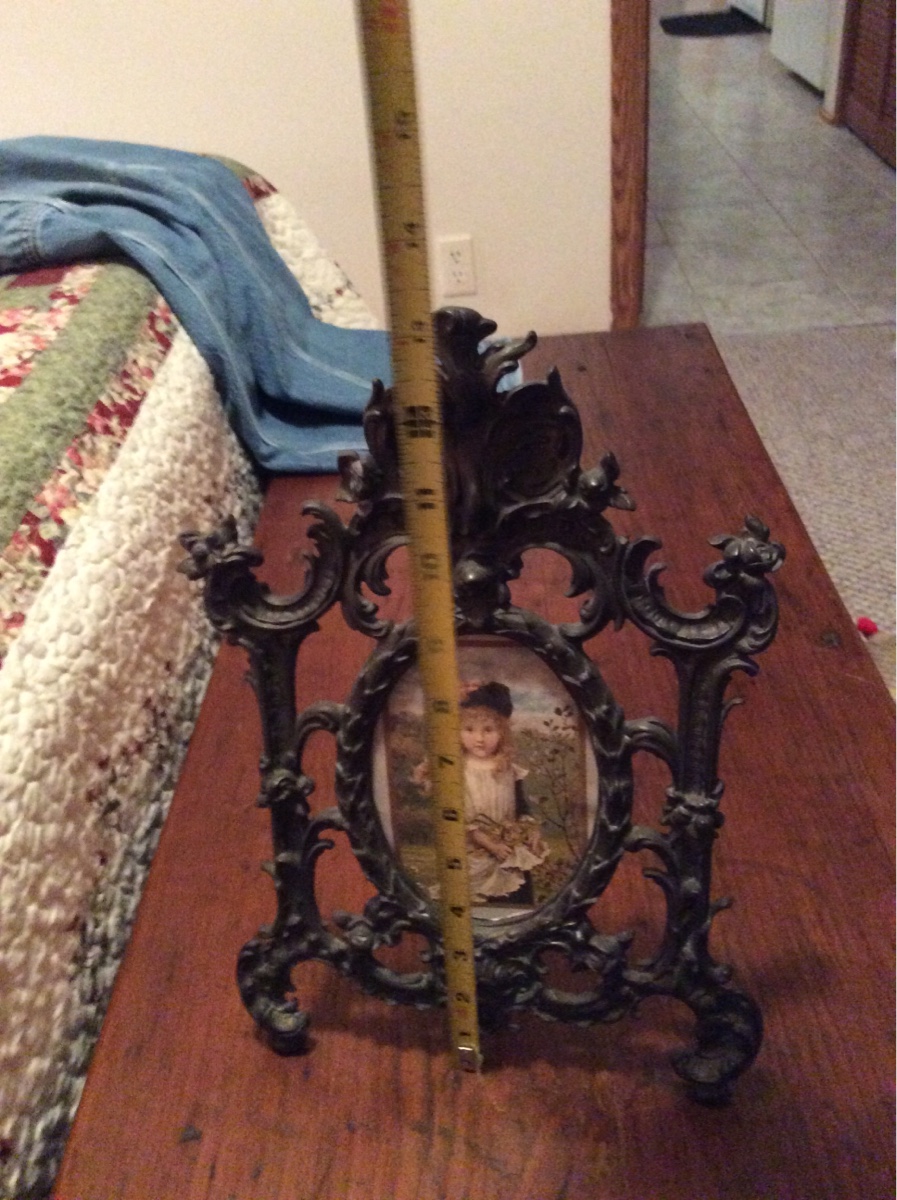 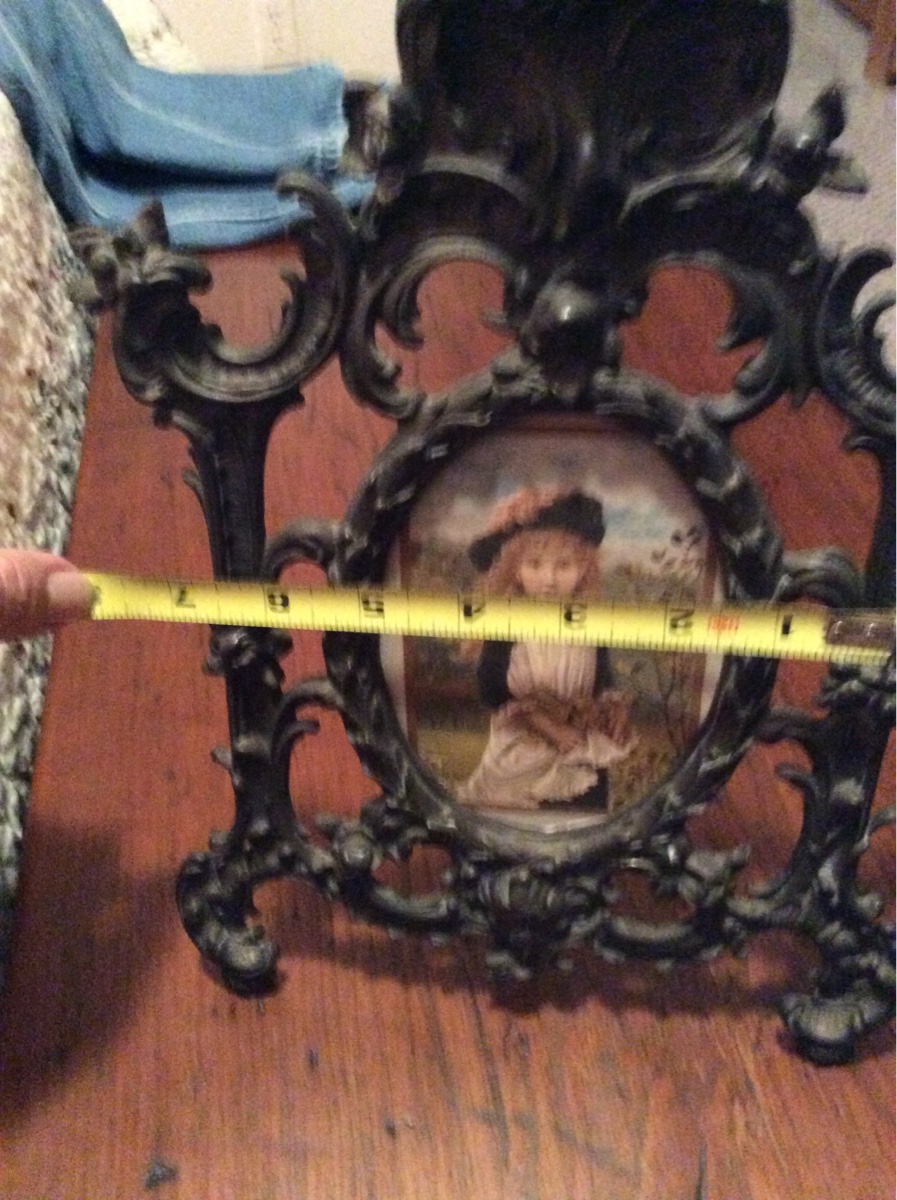 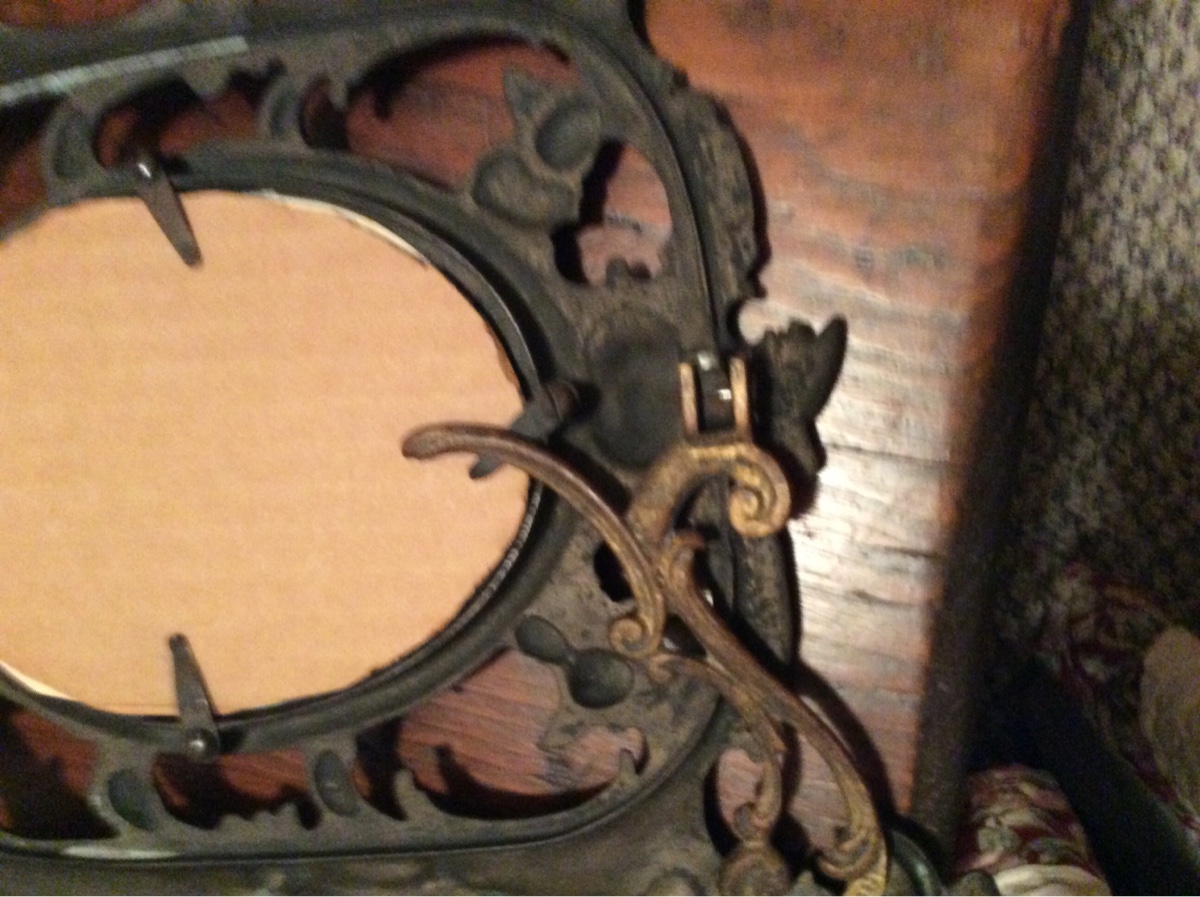 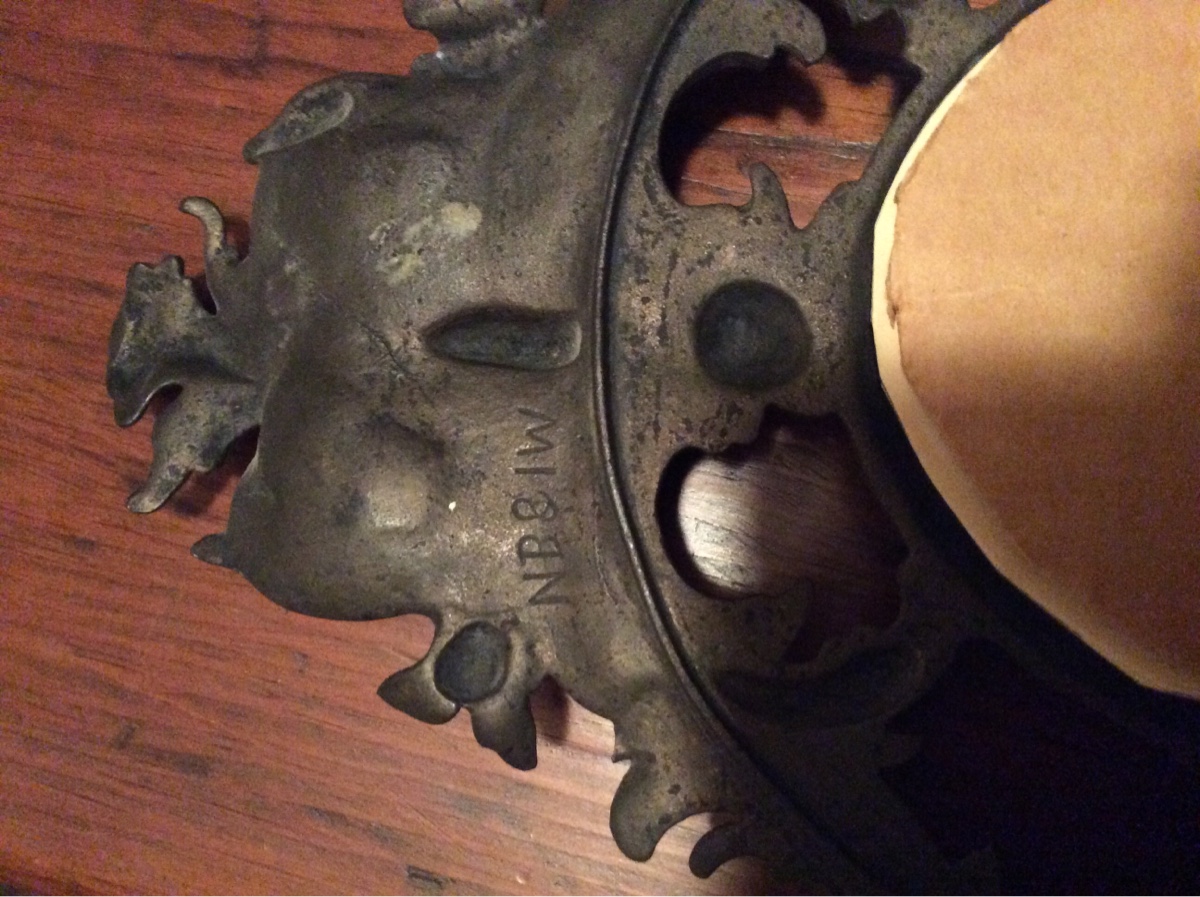 Thank you for choosing JustAnswer. My name is Rarewares.
I will let the expert know that youhave requested him so that he will

see the question first when he next logs on. I will opt-out so he can answer.

Thank you for your patience.

Hi Cindy!
Apologies for the delay, Halloween and fall break intervened. Strange having trick or treat on a Monday night, but the warm weather drew outdoors hundreds of neighborhood kids, most I'd never seen before who normally live permanently inside like mushrooms.

This is a very pretty cast iron or cast spelter easel picture frame, in a rococo revival style that has remained so endearingly popular ever since it first appeared in the days of Louis XV (1723 -1774) of France. This frame is late 1800s to early 1900s in date so is well over a hundred years old.

The "NB & IW" stands for the National Brass & Iron Works of Reading, PA founded in 1891 and in existence for only a very short span of years until 1911.

The way to test what metal it is, is to apply a magnet. If strongly magnetic, it's cast iron, if very weakly magnetic, it's brass, if not magnetic at all, it's spelter or pot metal. Actually, the composition of the metal is irrelevant as far as value is concerned, though the ones that are gold gilded are the most sought after.

This version of you frame, for instance, sold on line for $120 which is about the top end for one of these.

Now go put a nice picture of yourself in there and stop being so hard on your dear husband's wife (you!) calling her an old hag!

Customer reply replied 3 years ago
I feel only a pic from 1800 to 1900 would look best. I think it's very nice also. Kinda Halloweenie. I've been watching One American News (OAN) its like a train wreck, I can't look away. Thumper was here replacing my broken kitchen window. My umbrella did a Mary Poppins out of my table on the deck. It hit my double Payne window and broke the inside house window. I noticed the huge crack at the top when I changed my verticals. And had to get the old track down. He and Richard insist when they are together to drive me nuts!! I think they do it on purpose. All they talk is dead deer. Did u dress up for halloween? Fall break, your either teaching or learning which is it.

Neither teaching or learning, just co-parenting three teenagers along with my dear missus Carol. In fact, I do a magnificent job allowing her to do 99% of the parenting, I think it's very generous of me. I step in on important matters like US, Russia diplomatic relations and so on.

The Mary Poppins umbrella through the kitchen window made me smile, but what devastation! Aren't you lucky having a handy Dick Van Dyke (aka THumper) to put it all to rights.

Customer reply replied 3 years ago
I love thumper. He's so full of beans. AND so are you!!! Missus carol has you right where you belong. Behind her! lol I'm sure one day your kids will give a crap about Russia but until then SHhhh.

You are right, and neither did the kids seem very enthusiastic about my monologue on the collapse of the Venezuelan bolivar ($). I do admit, though, it was a little too sensational for them.

Customer reply replied 3 years ago
I don't see a request me again. Thingy. Anyway it can't be to far. So I know I haven't had much shakin but today I bought new stove and hood. I need a rug and the kitchen will be complete. Yay. I have some small things don't care bout the $$ so to speak but I'm looking for a history lesson.

It's my fault, I didn't check the box I'm supposed to do my end.

Keep 'em coming and I'll keep going with the history!

Hope you're a Cubs fan! Even if not, it's a wonder to think that when they last won in 1908, Orville Wright was still pioneering his flying machine. And the first woman ever to fly, Thérèse Peltier, took to the air on July 8, 1908, when she made a flight of 656 feet as a passenger with Léon Delagrange in Milan, Italy. Leave it to the Italian stallions, they have to have their arm candy with them at all times.

Women couldn't vote! You are right.

Funny how the GOP still hasn't got that memo!

Customer reply replied 3 years ago
Lol to funny. She's gotta go Robert. First chance at a woman for president to properly run this country and we have to get a sell out and thief. This sets women back at least 8 yrs. stupid ************.
Was this answer helpful?
Yes
No

Robert S.
Antiques and Collectibles Researcher
BA
7,063 satisfied customers
It is an oil painting of a woman. It measures 18"x22" unframed.
You had a male art expert with white hair that was wonderful, but I can't access my questions to see his name. If he isn't available, Diane F. would be my choice to answer thiis question; It is an oil… read more

HopeC
JustAnswer Expert,TSA,DMV,Antiques,other
Associate Degree
5,186 satisfied customers
Good day, I inherited my Grand-mothers old books when she
Good day, I inherited my Grand-mother's old books when she passed away in 1987 and haven't touched them since? I have... 9 brownish leather bound books with gold like embossing of a lady and the title… read more