Of Bay City, Texas. I have several paintings that are the…

Hi, my name is***** of...
Hi, my name is***** of Bay City, Texas. I have several paintings that are the works of the late Forest Bess. I was employed with Harry Burkhart III from 1970 until his death in 2009. He was a lifelong friend of Forest Bess in Matagorda County, Texas. Mr. Burkhart had dozens of paintings from Mr. Bess: some he bought, some he traded for and some were gifts from Mr. Bess. Mr. Burkhart owned a Bay house at Cape Carancahua outside Palacios, Tx and as he got older he stopped spending time there. Many of Mr. Bess' paintings were stored in an old garage and became weather damaged over the years. Mr. Burkhart asked me to clean out the garage and throw away anything that I did not want to keep. I threw everything away including some of the paintings that were in the worst shape, but I did keep several of them. The paint is flaking on some of them and some have tattered canvass edges. A few have the original frames and three of them are dated and signed by Forest Bess. My wife and I won tickets to attend the Roadshow in Charleston, SC last year, but were unable to go when my wife was hospitalized unexpectedly. We had planned to take a couple of the best paintings. I do have pictures I could submit.
Show More
Show Less
Ask Your Own Antiques Question 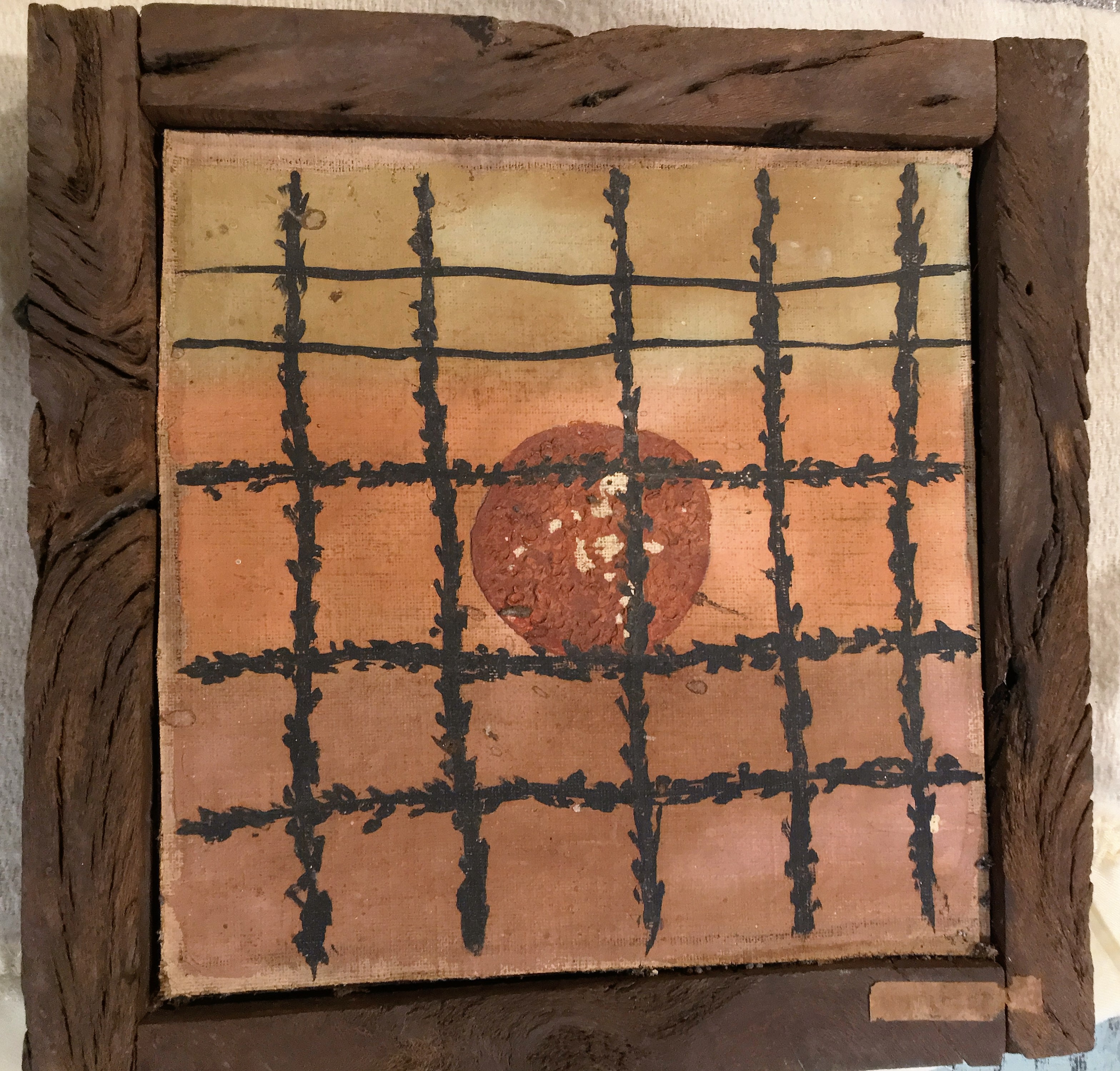 Hello my name is***** am a certified appraiser and would be happy to help you.

To give you a rough estimate his works are worth(###) ###-####00 per square inch. It depends on the subject and size of the paintings. Like the one you have photographed here I see in rough condition would sell for 4500.00

Below is his biography:

Forrest Clemenger Bess was an abstract artist, teacher, and frame maker. Most of his works emanated from visions seen in his dreams and recorded into a bedside log. His oil paintings were small and depicted personal symbolic images including eyes, lines, crosses, crescents, and other simple geometric forms.

Forrest Bess was born in 1911 in Bay City, Texas. As a youngster, he spent time in various oil towns in Oklahoma and Texas, as his father was an itinerant oil worker. Bess' grandmother likely provided his interest in art. His first art lessons were given to him by a neighbor in 1924.

He studied architecture in 1929 at what is now Texan A&M University, and his other intellectual interests included Greek mythology, English literature, and the study of the works of Freud and Darwin. Two years later, Bess began studies at the University of Texas, but shortly quit after two years to work in the Texas oil fields. After saving enough money, Bess went to Mexico where he began to paint in a manner influenced by Van Gogh and Maurice Vlaminck, a style he called post-impressionist. He opened a studio in 1934 in Bay City, and two years later had his first exhibition in a local hotel lobby.

During World War II, Bess was involved with the U.S. Army Corps of Engineers. After spending time in a Veteran's Hospital in San Antonio in 1946, for symptoms of a mental breakdown, Bess took a job there giving art lessons. A few years later, in response to his father's failing health, he returned to Bay City to care for his family's bait business. He remained there for the rest of his life caring for the business as well as giving art lessons and painting.

In 1949, Bess' first major exhibition took place in New York City, promoted by gallery owner Betty Parsons. Parsons represented major artists involved with Abstract Expressionist and Color Field painters. Additional exhibitions followed throughout the 1950s and 1960s. Bess' work has been included in many major galleries and exhibitions including the Corcoran Gallery Biennial in 1939, the Witte Museum in San Antonio in 1938 and 1967, the Museum of Fine Arts in Houston in 1951, the Andre Emmerich Gallery in Houston in 1958, the Oklahoma Art Center in Oklahoma City in 1951, and the New Arts Gallery in Houston in 1963, among many others.

Many Texas collectors and artists were drawn to Bess' work in the 1960s. Towards the end of that decade, Bess' career began to ebb, as his theory on hermaphroditism alienated many. His eccentricity preceded a stroke he suffered in 1974, and was admitted to a state hospital, later to be diagnosed as a paranoid schizophrenic. He soon stopped painting and died in 1977 in Bay City, Texas.

After his death, exhibitions of Bess' work took place at the Museum of Contemporary Art in Chicago, the Butler Gallery in Houston, and the Museum Ludwig in Cologne, Germany. The Smithsonian Institute's archives of American Art houses much of his correspondence.

If you have other photos and measurements I could help you more specifically. I wanted to give you a rough estimate so you can go through and see what you. In perfect condition they would bring the(###) ###-####00 per square inch from there the damage or issues each has would take the value down.

PeterS128
Appraiser
Master of Fine Arts
247 satisfied customers
For Macy_GeneralExpert: Mug from Charleston Expo, 1902 --
For Macy_GeneralExpert: Mug from Charleston Expo, 1902 -- I'd like to know the condition, composition, history, and current value for this item. On the side opposite from the Expo 'engraving', there i… read more

Glenda B.
Antique Appraiser
College
35,605 satisfied customers
Eckelberry signrd, Black and (watercolor?)industrial scene,
Don Richard eckelberry signrd JA: I always love having an appraiser look at my stuff. Sometimes its turned out to be surprisingly valuable. Tell us what else you do know and the Antiques Appraiser wil… read more

Glenda B.
Antique Appraiser
College
35,605 satisfied customers
Show more
Disclaimer: Information in questions answers, and Show More
Disclaimer: Information in questions, answers, and other posts on this site ("Posts") comes from individual users, not JustAnswer; JustAnswer is not responsible for Posts. Posts are for general information, are not intended to substitute for informed professional advice (medical, legal, veterinary, financial, etc.), or to establish a professional-client relationship. The site and services are provided "as is" with no warranty or representations by JustAnswer regarding the qualifications of Experts. To see what credentials have been verified by a third-party service, please click on the "Verified" symbol in some Experts' profiles. JustAnswer is not intended or designed for EMERGENCY questions which should be directed immediately by telephone or in-person to qualified professionals.