Hello, I have a jade...
Hello, I have a jade pot with lid that I purchased in China (Hong Kong actually) in a market. It is quite pretty and has Chinese markings all over it. The main body of the pot is made of 12 pieces of jade connected with what I don't know. It may appear there are cracks but on close inspection these are actually veins in the jade. Interestingly several of the pieces have been sliced and then mirrored imaged so the veins in the jade show up opposite each other if that makes any sense. The veins are showing up on the inside of the pot. There are markings on the bottom of the pot. The pieces are quite delicate and thin and when the pot is held to the light and if you look inside the jade is almost see through like bone china. I would love to know more about it and of course its value.
Thank you.
Belinda McNeely
Show More
Show Less
Ask Your Own Antiques Question 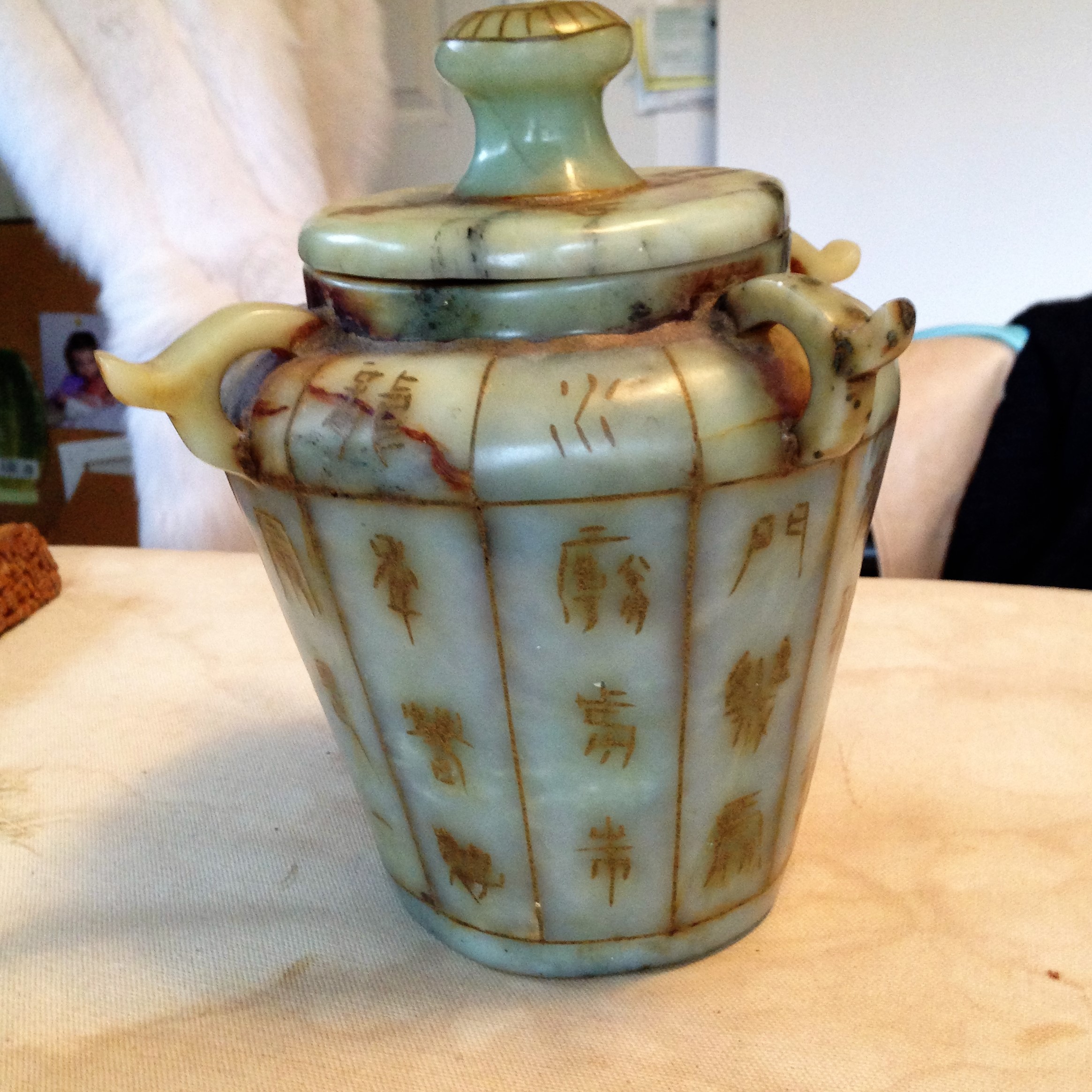 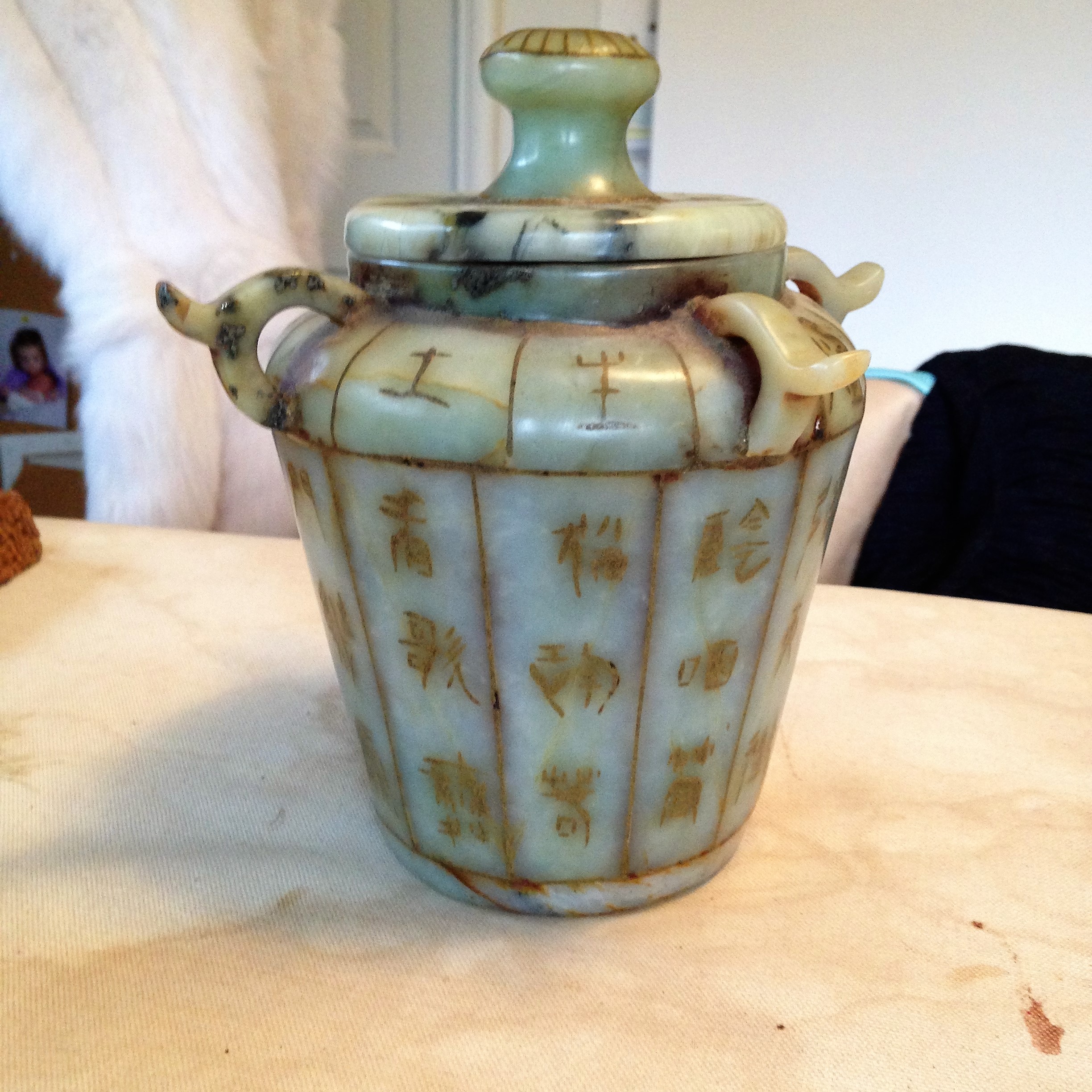 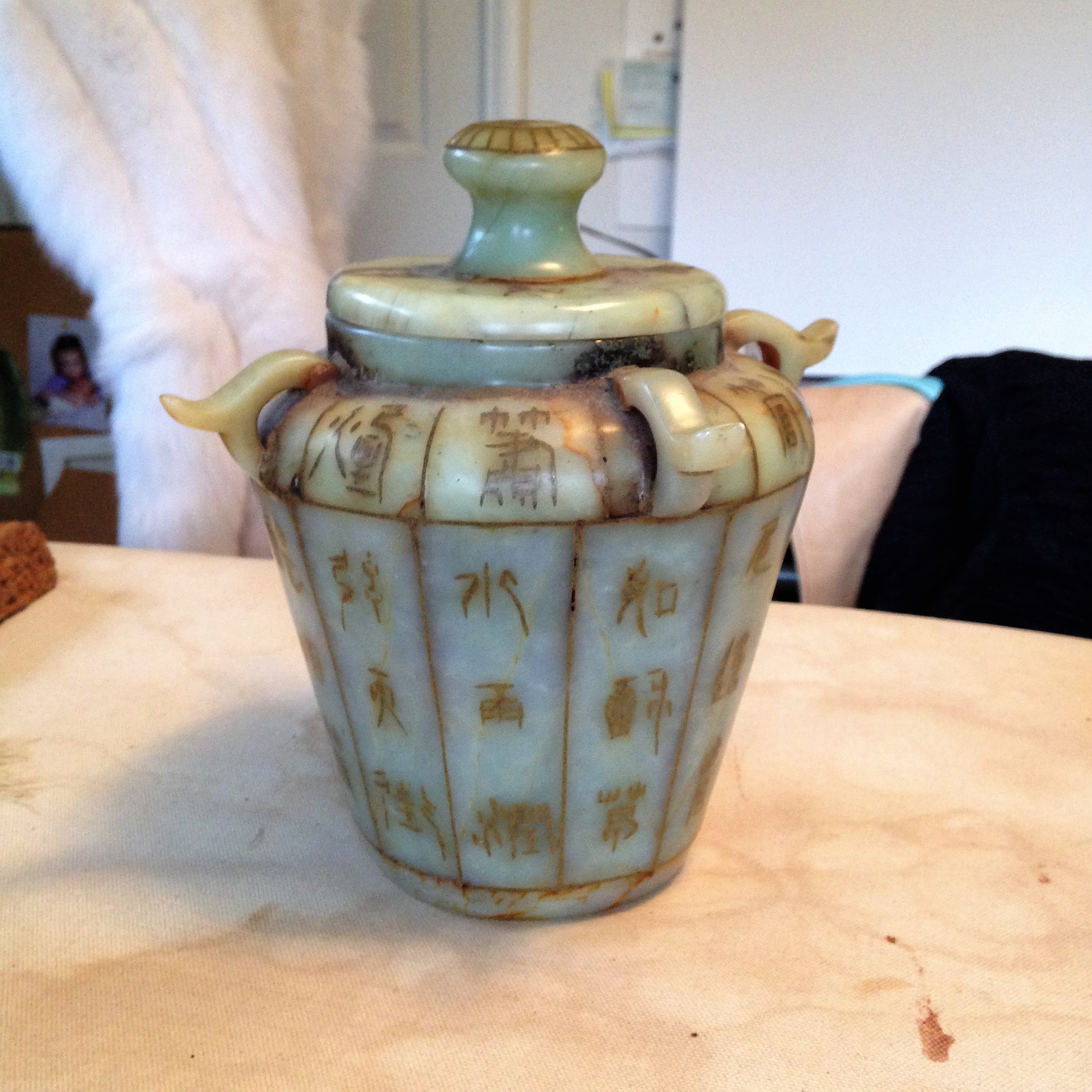 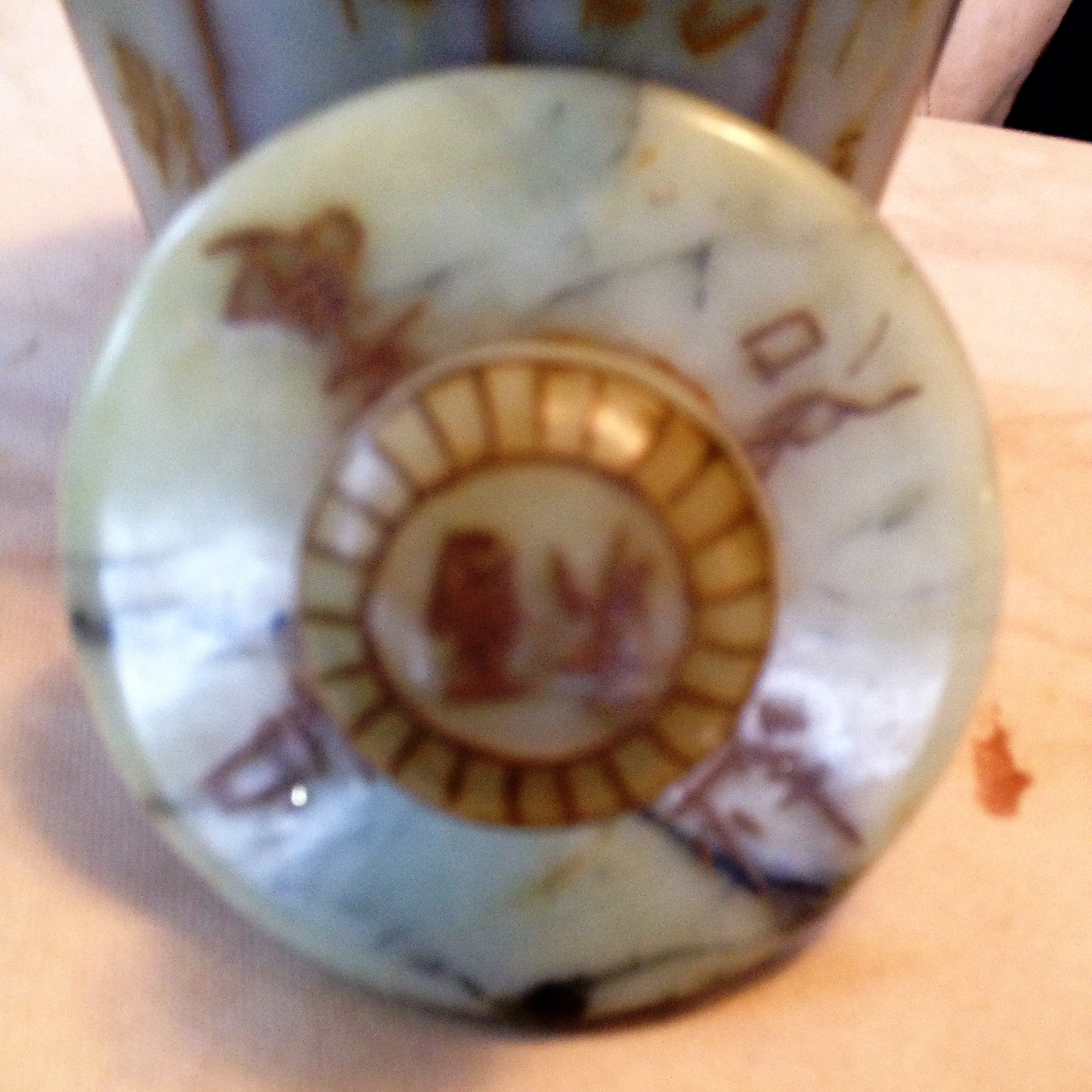 Could you very kindly do something for me to test the material. If you look at the bottom, you'll see where the edge of the bottom rests on the surface it's placed on creating a worn rim. Can you carefully add a scratch to that worn part with a sewing needle and see if it makes a white powder in the scratch. (I quite understand if you don't wish to do this, but I assure you, it won't do a bit of harm to the item and it will help us greatly in determining what species of stone it is).

Also, thanks for the excellent photos of the side, could you add a sharper one of the lid so I can see the characters better. And a photo of the inside would be great too.

Customer reply replied 4 years ago
Hi Robert, OK, Did the scatch test. Yes, white powder. I have a feeling this means it's not jade. Oops! I will add the extra photos of symbols around the lid and the best I can manage inside the pot. The inside shot shows an area where the sun is shining against the pot.The photo makes the inside appear orange. It isn't. It is brown. It seems the inside has been purposely dyed to the brown color as it comes right up the edge of the brim. The color of the glue used to connect all the pieces is orange and the glue is only evident on the inside. Looking forward to hearing from you!
Belinda
Customer reply replied 4 years ago
I am having trouble getting this to send so hopefully by adding something in this box it will be ready to send! 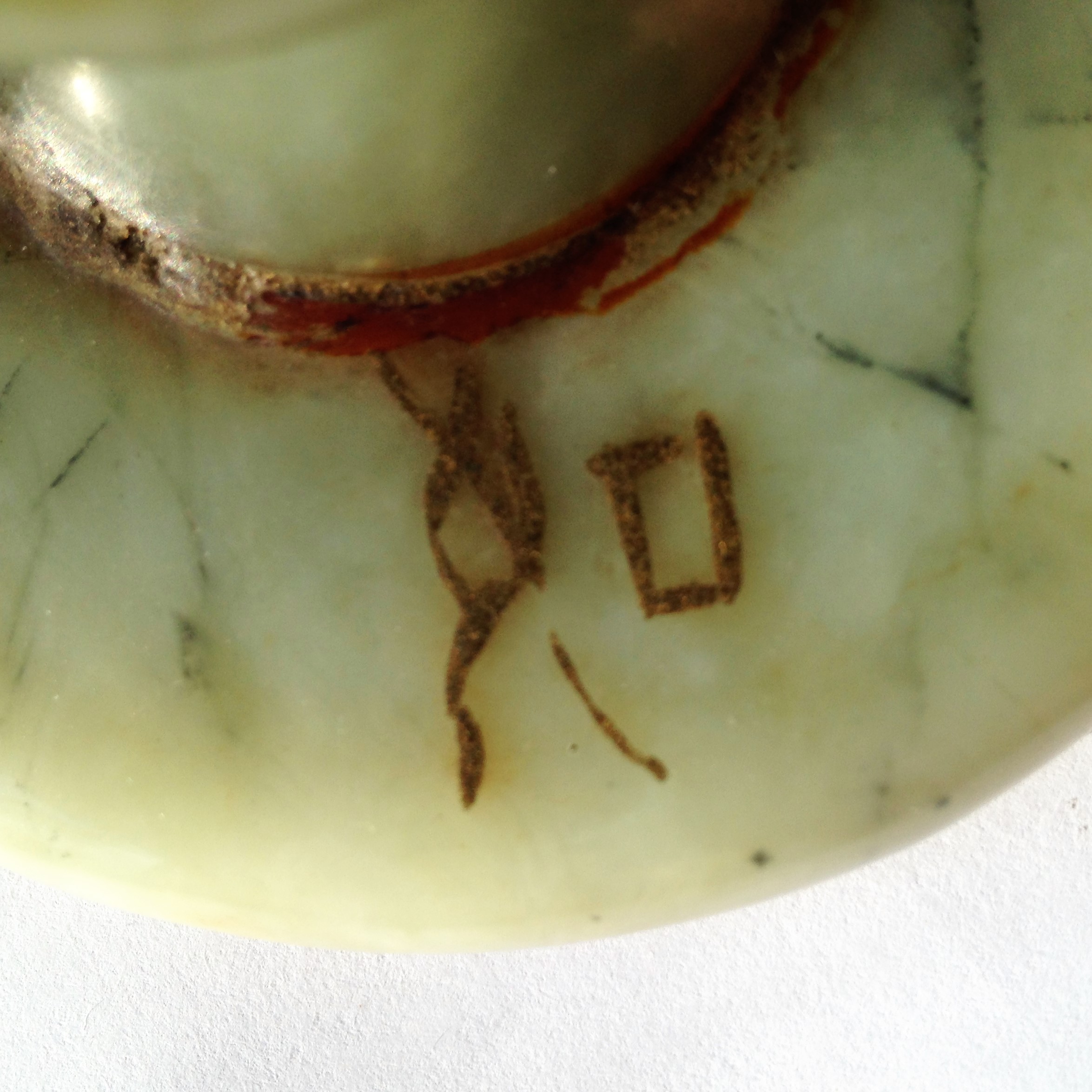 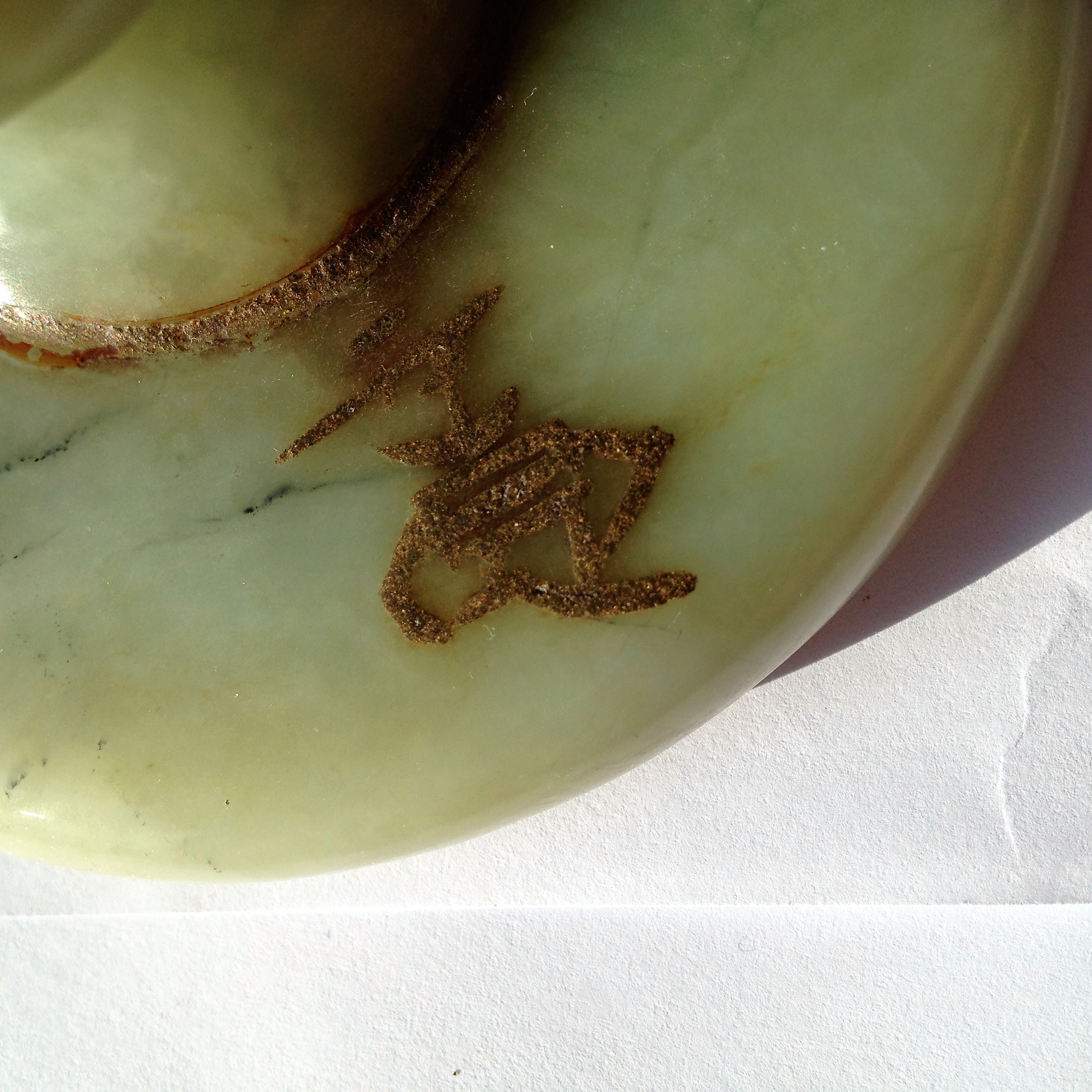 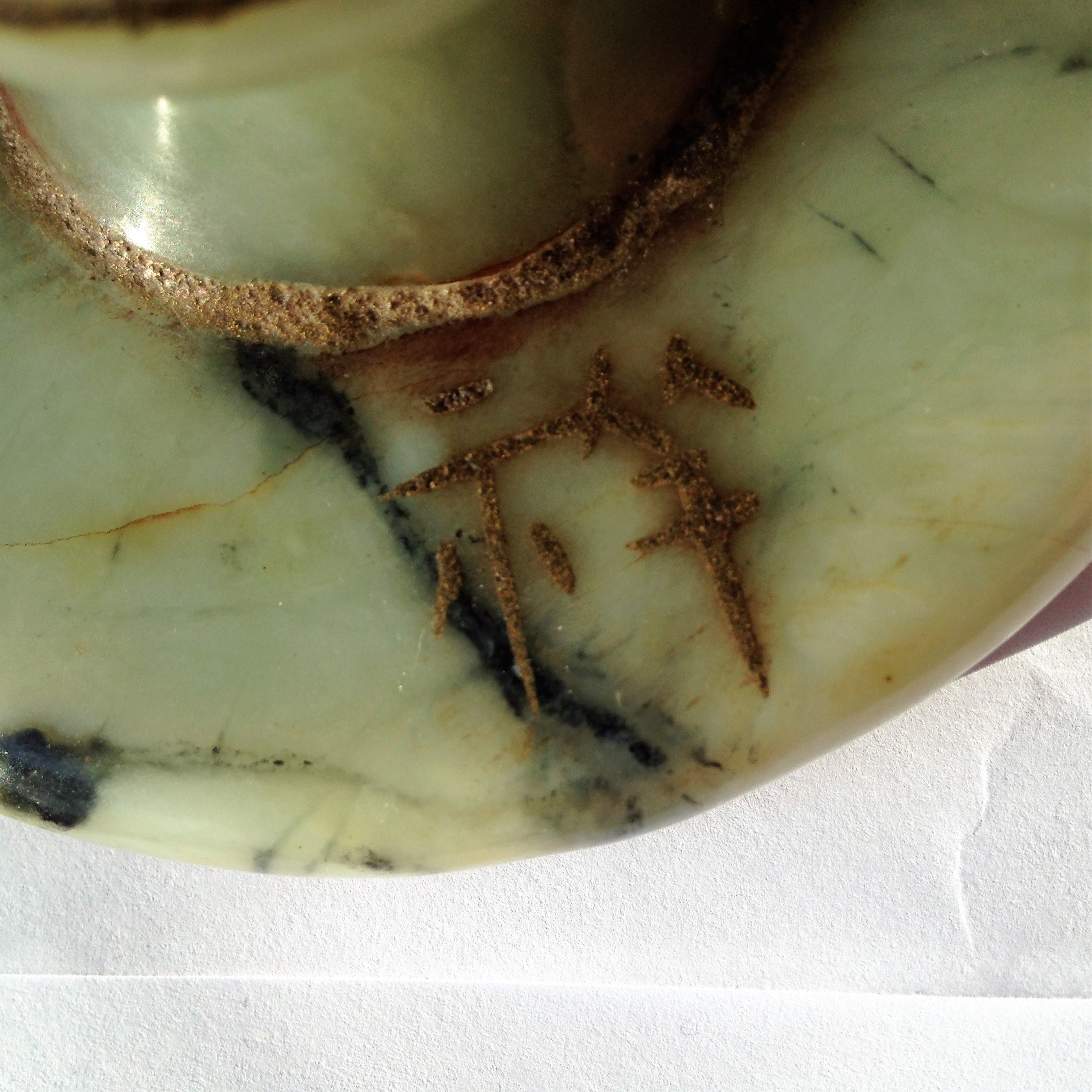 Thanks for doing the scratch test, and yes, I'm afraid if you get a white powder that rules out jade as it's too hard to be scratched by steel. The color and translucency and silky texture indicates that this what the Chinese call "Shoushan" a species of rock similar to talc or soapstone and very popular in the decorative arts for carving.

This jar is nicely made and has pleasing proportions, and its construction of prefabricated panels cemented together is unusual. That, and the winged loop handles are deliberately done to give it an archaic look.

Also, the inscriptions down each panel are written in an archaic from Chinese writing called "small seal script" or xiǎozhuàn adopted in Bronze Age china round about 220 BC. All of this points to an item deliberately made to look archaic but most likely made the early 20th century at the oldest.

"Small seal script" is notoriously hard to read and even the Chinese struggle with it, but if one were to be able to translate, these usually turn out to be transcripts of ancient literary works or poems.

On the top and cover are charm inscriptions, but again they are impossible to read, and made even harder by the deliberate omission of some of the strokes to make it look 'older'.

The mark on the bottom is the mark of the maker and looks like it transcribes as:

This is of curiosity value only as knowing the name does not change the value of an item such as this. There are almost no individual Chinese carvers who have a specific following of collectors in the west, -unlike, say, Japanese netsuke carvers which have an avid and quite specific following worldwide.

This is an appealing little jar, all the same, and I can see why you were drawn to it. If you were to see it for sale in an antique store it would have a full retail value of around $150.

PS. If there's anything more I can help you with on this, please don't hesitate to ask. If not, could you very kindly rate my services (with the stars or "accept" button) as this is how I get paid by JustAnswer at no extra cost to you. We can still continue to communicate here on this thread after you do. And if you have another item you'd like to ask me about, just start a new Question and put "For Robert S....." in the subject line. Thanks, R.

Diana F.
Appraiser
Bachelor's Degree
9,473 satisfied customers
Show more
Disclaimer: Information in questions answers, and Show More
Disclaimer: Information in questions, answers, and other posts on this site ("Posts") comes from individual users, not JustAnswer; JustAnswer is not responsible for Posts. Posts are for general information, are not intended to substitute for informed professional advice (medical, legal, veterinary, financial, etc.), or to establish a professional-client relationship. The site and services are provided "as is" with no warranty or representations by JustAnswer regarding the qualifications of Experts. To see what credentials have been verified by a third-party service, please click on the "Verified" symbol in some Experts' profiles. JustAnswer is not intended or designed for EMERGENCY questions which should be directed immediately by telephone or in-person to qualified professionals.