S. Only please.. Here are 2 framed art purchased together. A…

Robert S. Only please. Hello...
Robert S. Only please. Hello Robert. Here are 2 framed art purchased together. A warrior on a charging horse and a warrior standing. I do not know the art style. How I think it was created was they laid down a silhouette in black was first placed on the
silk ( lots of fibers strings) or handmade paper. On top of that they came back with gold . could be the reverse with blck on gold. But I think because I see black all along the perimeter of the subject, it is gold on black. then they scraped or brushed away
the gold to have the black appear. the outside matt has a very light lace like pattern like you find on fine china dinner plates. the outside mat is flush with the art but between the 2 is a fine 1 mm gold line. the frame is special too. no nails. finger joint
like connection. The horse warrior is slightly larger 44.50 cm by 32.50 cm The signature and markings are the same on both. If you can give me some info on one the other should be about the same. I just sent both to help you. Let me know if you need any other
info or pics. Thanks Robert. Again take your time no rush.
Show More
Show Less
Ask Your Own Antiques Question 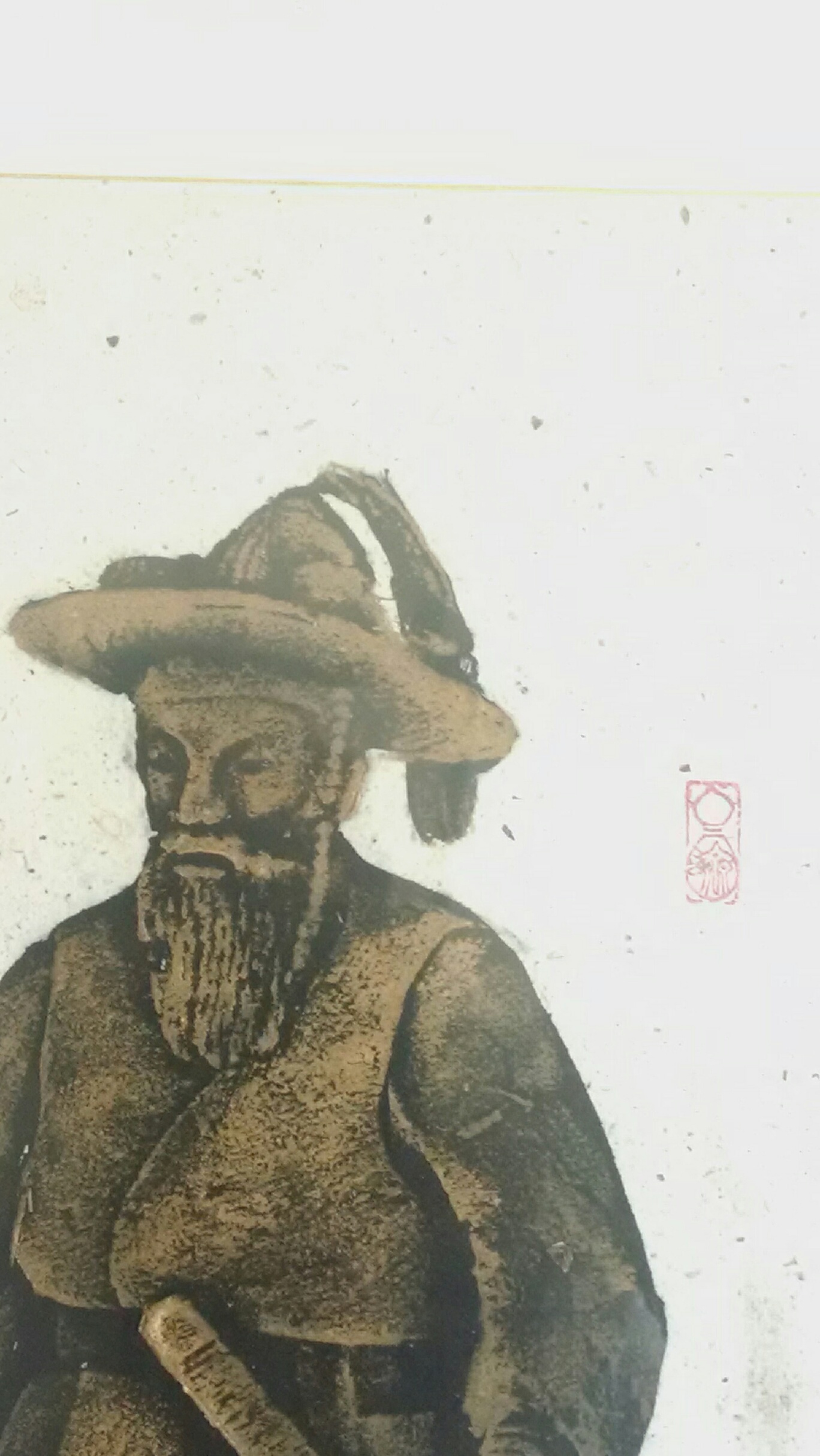 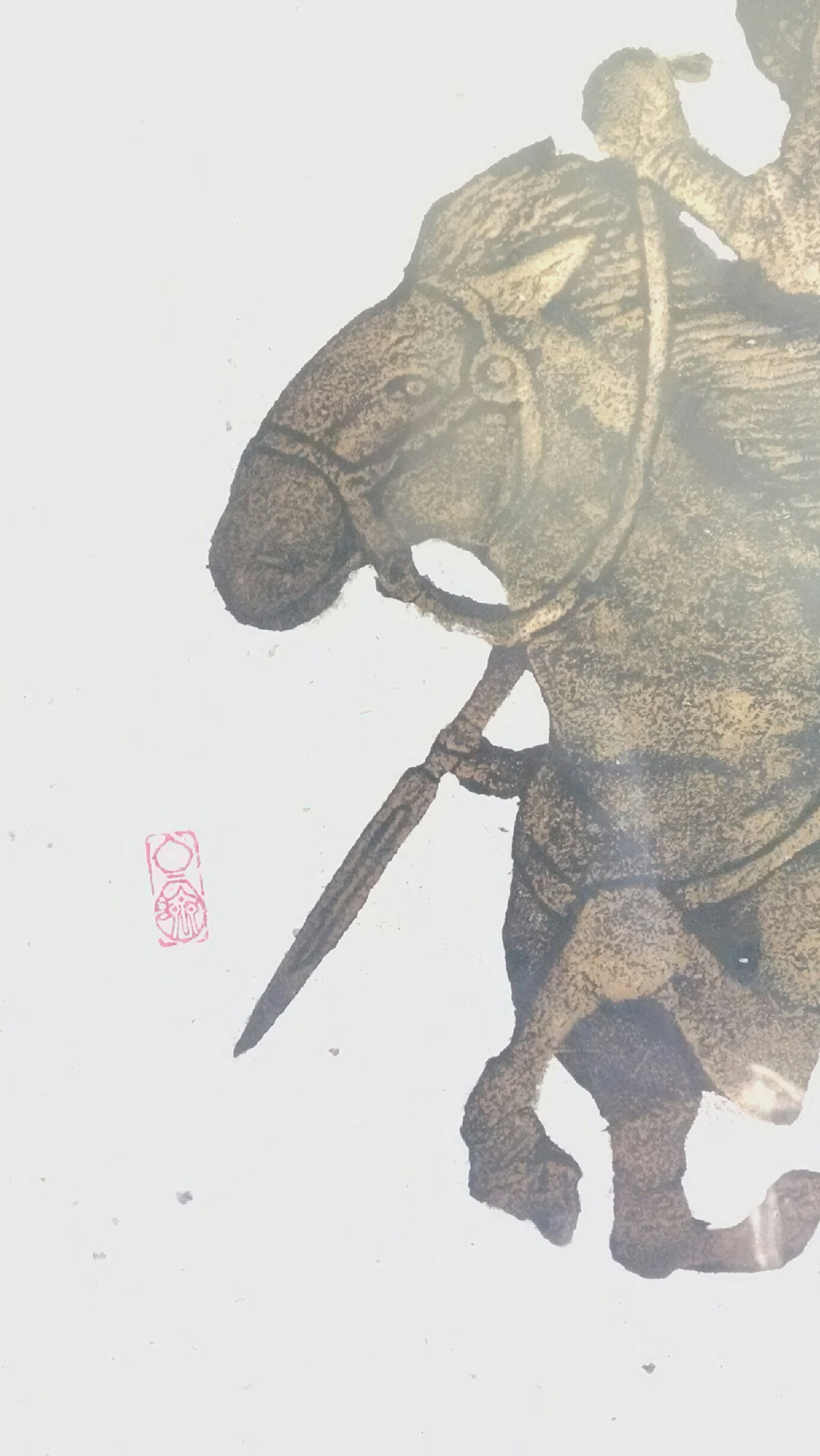 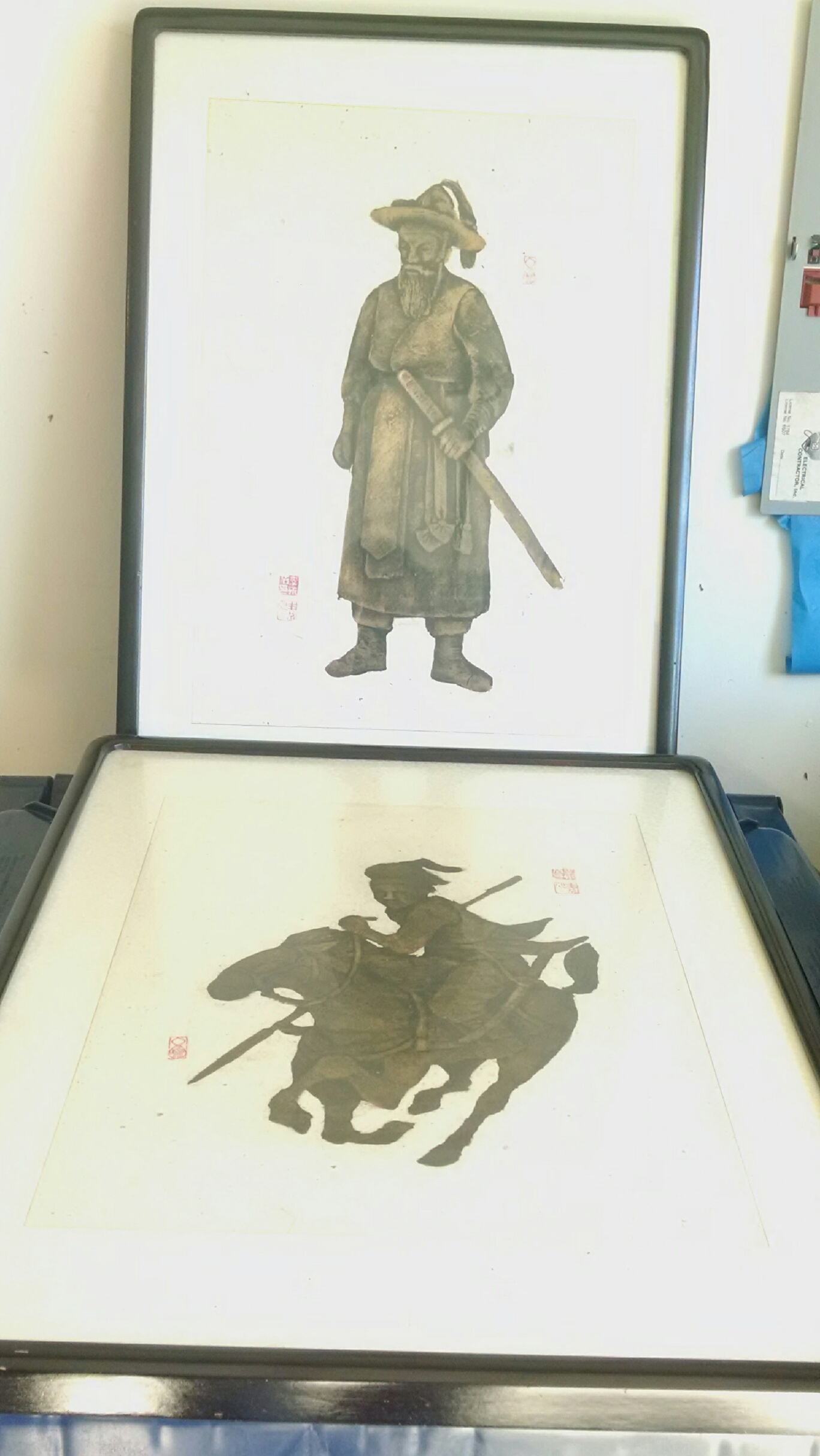 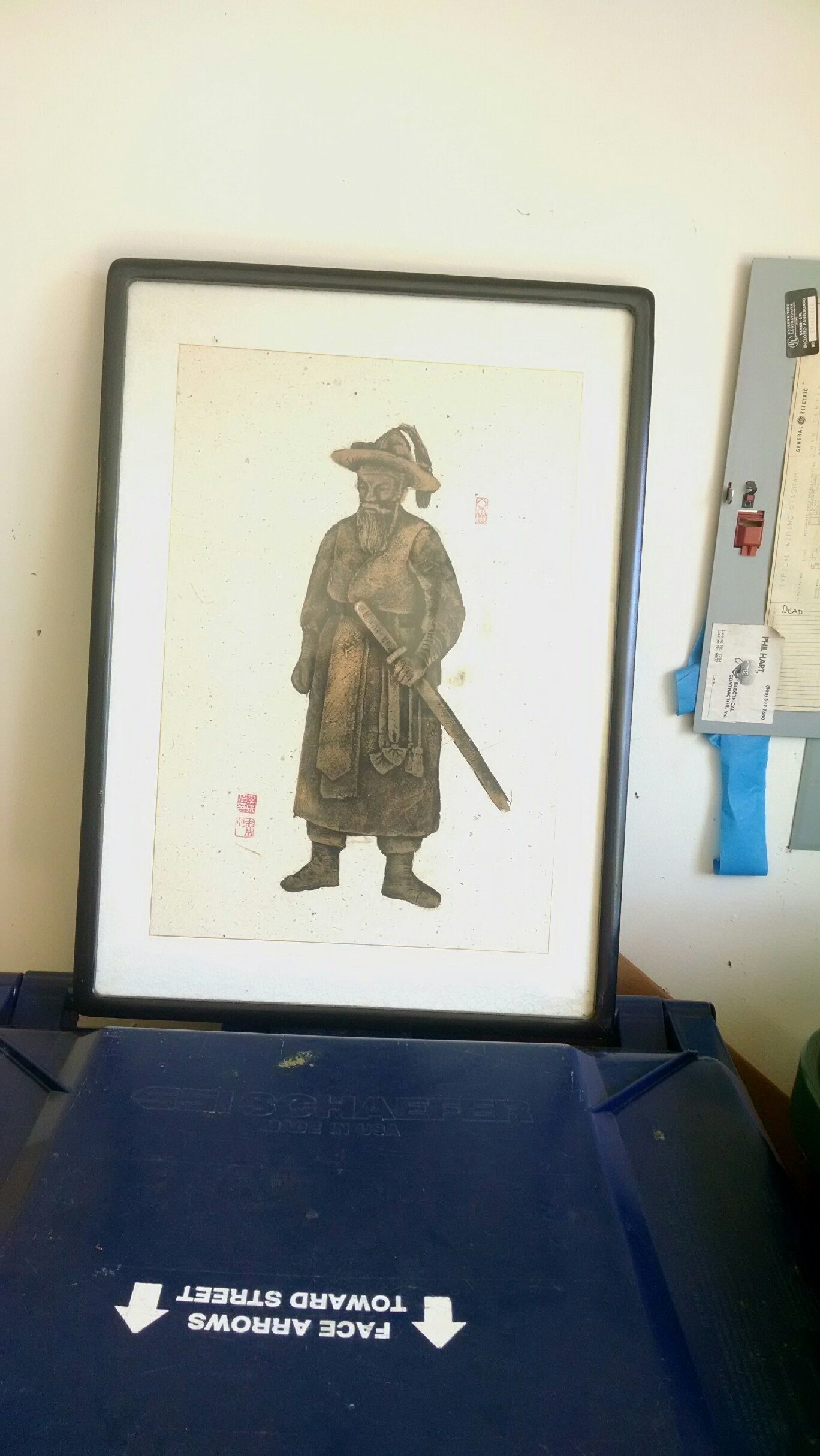 I've got this one too! Answer as soon as I can.

Customer reply replied 5 years ago
You already proved to me you are an expert on asian oriental artwork, Are you expert on american artists possible early 20th century charcoal scetcher and plen aire artist? I have done the normal google search and can not decipher the signature or any info on the artist. Let me know and I will submit them (2) . Thanks

I can certainly have a look at it and see if I can read the signature, but can't promise anything.

Meanwhile, I should have something on these warrior pictures for you shortly.

Customer reply replied 5 years ago
Here are some added pics of back and information. I purchased it 15 years ago from someone that said they got it from someone that was deployed in military or engineering in south korea. The back does not show age. I do not know if re-framed but this is real quality. the corners are some type of complex finger joint, the fasteners look like large staples and the hanger is nailed on. When I rub my hand on the back, I can feel several support ribs, and an inner frame perimeter. Again, take your time I do not rush people. 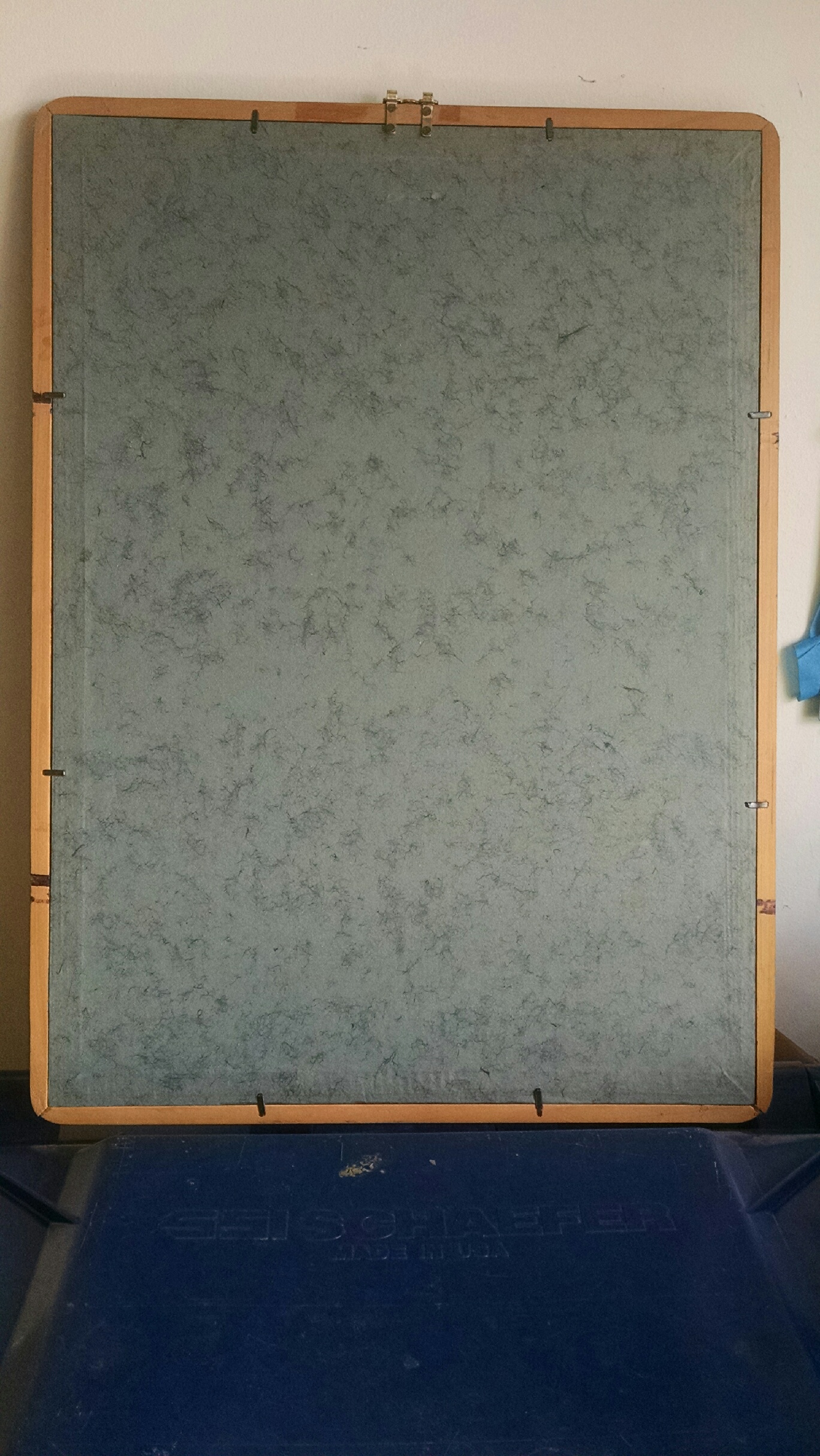 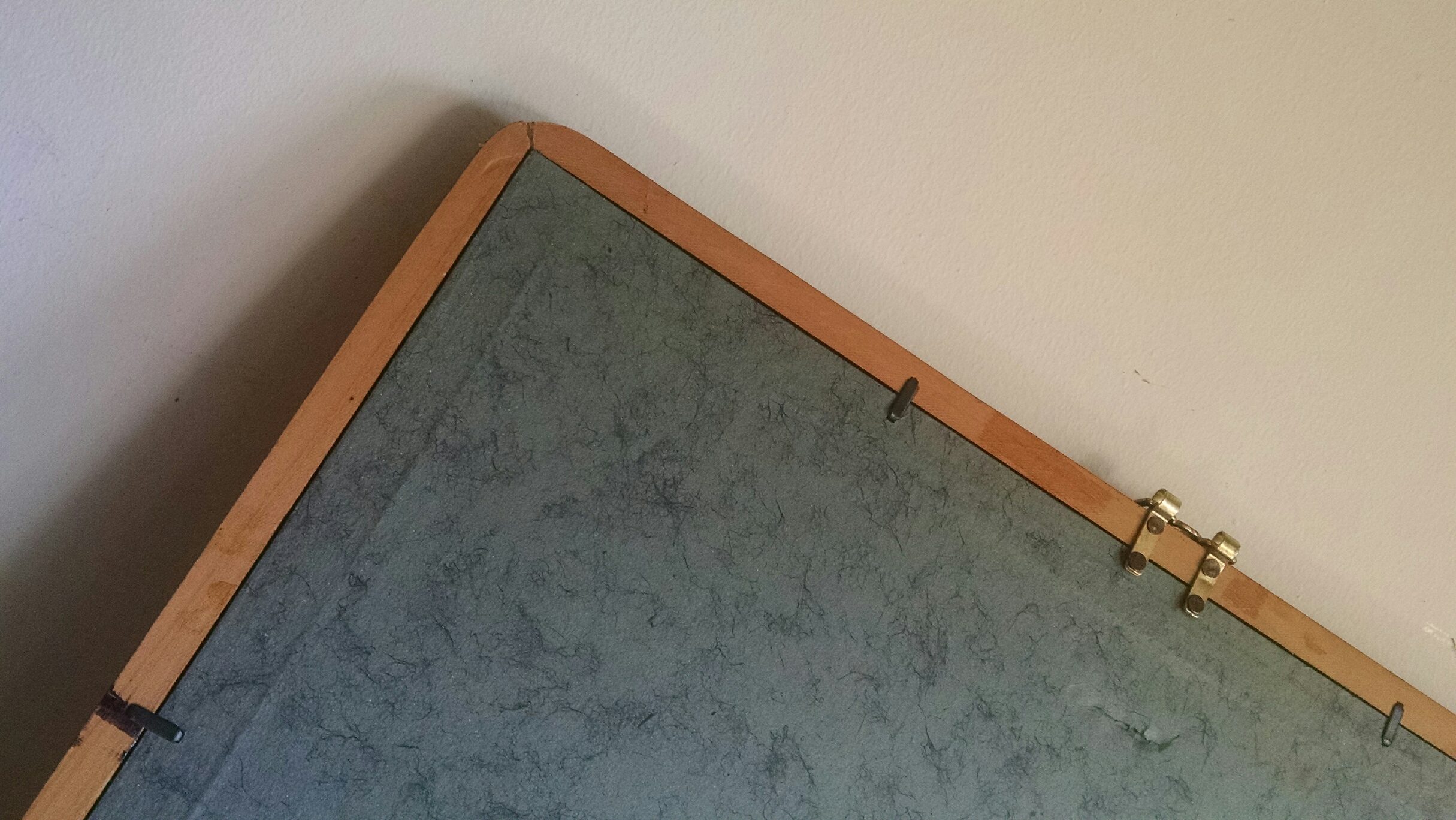 Thanks for the helpful additional photos, you are right, these pictures are put together with great care and attention to detail and the Chinese mitering on the corners is always good to see. They are masters at nail-free cabinet work. Just look at the complexity of this three-way miter, it's enough to puzzle even Mr Rubik

The fact that these are 'ebonized' (stained black to look like zitan -Chinese ebony) indicates a 20th century date and judging by other features, I would say 1950s or 1960s, certainly post-WWII. By the early 20th century all old growth zitan wood had been exhausted and the Chinese took to staining other hardwoods to make them look like the real thing, a practice that has become a useful way of confirming age.

As for the pictures themselves, this is a nice decorative pair of lithograph prints, mounted in the traditional way with brocaded silk mats.

They are depictions of Mongolian figures, the standing figure is dressed as a Mongolian nobleman with the special hat with a tassel (like a horse's tail) that indicates his status.

The warrior on horseback is a typical Mongol lancer demonstrating his equestrian skills in battle, the Mongols being notorious for their trick riding and from the land where horse-craft began. The saddle, stirrups, harness, all invented in China and, like so many of the inventions of civilization that we take for granted today, brought to the west on the Silk Road or by ship with cargoes of porcelain and tea.

As for the artist, he's not in my references of listed names, which is not that surprising as it contains only a limited number. That is, all the "A-list" of well-known names, the only ones that have a specific collector following outside China.

As a pair of decorative vintage Chinese lithograph prints they would sell at auction for $80 - $125 for the pair and therefore have a retail or gallery value of about $250 for the pair.

Hope this is helpful information,

CASSOC (Randi)
Certified Appraiser
Vocational, Technical or Trade Scho
1,512 satisfied customers
Show more
Disclaimer: Information in questions answers, and Show More
Disclaimer: Information in questions, answers, and other posts on this site ("Posts") comes from individual users, not JustAnswer; JustAnswer is not responsible for Posts. Posts are for general information, are not intended to substitute for informed professional advice (medical, legal, veterinary, financial, etc.), or to establish a professional-client relationship. The site and services are provided "as is" with no warranty or representations by JustAnswer regarding the qualifications of Experts. To see what credentials have been verified by a third-party service, please click on the "Verified" symbol in some Experts' profiles. JustAnswer is not intended or designed for EMERGENCY questions which should be directed immediately by telephone or in-person to qualified professionals.