I have a Jade statue...
I have a Jade statue of an old man holding a staff with a dragon's head. It is about 8-12 inches tall. I was wondering what something like this might be worth?
Show More
Show Less
Ask Your Own Antiques Question 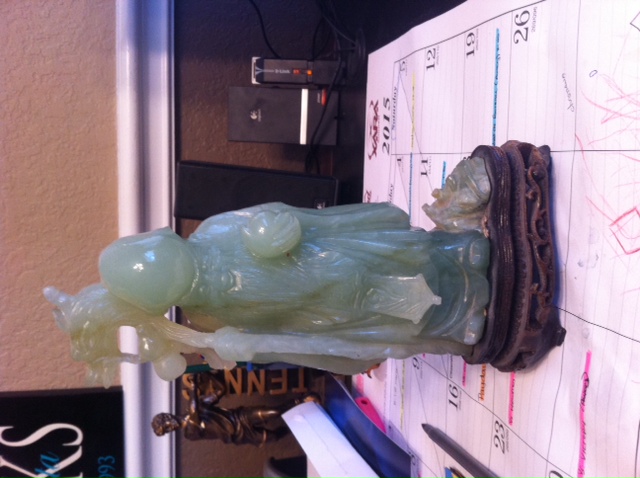 photo (3).JPGphoto (3).JPG
Share this conversation
Customer reply replied 6 years ago
Posted by JustAnswer at customer's request) Hello. I would like to request the following Expert Service(s) from you: Live Phone Call. Let me know if you need more information, or send me the service offer(s) so we can proceed.

Could you very kindly add a photo of the bottom of the jade statue and one of the underside of the wood stand. These custom made stands are often the best way of telling the age of the piece itself and there are often useful clues as to age on the bottom of the stands.

Also, any inscriptions on the back of the statue?

PS. Meanwhile, please don't rate me until you get a full appraisal and a value from me.

I mention this because you may get random prompts asking you to rate me before I've submitted an answer, ignore them, they are automatically generated by the site (it doesn't seem to be able to distinguish an answer from preparatory back and forth and information gathering) and don't come from me. Thanks, Robert

Customer reply replied 6 years ago
Is this what you mean by the bottom of the jade statue? 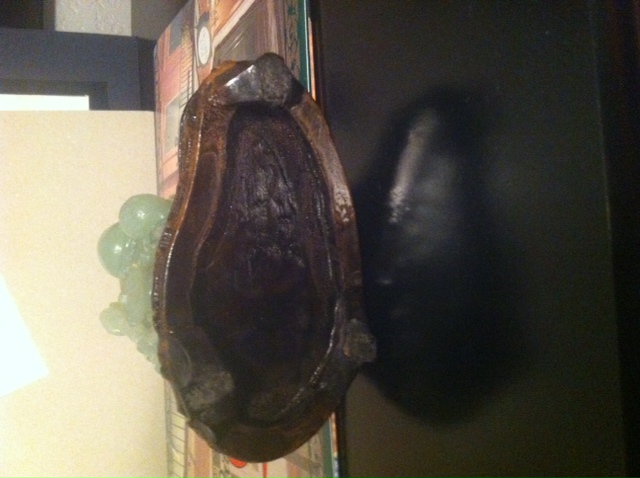 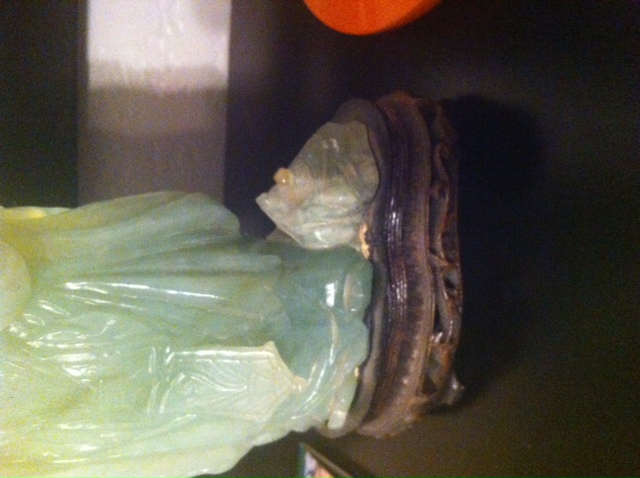 Is there an inscription on the back of the figure?

Customer reply replied 6 years ago
here's the back 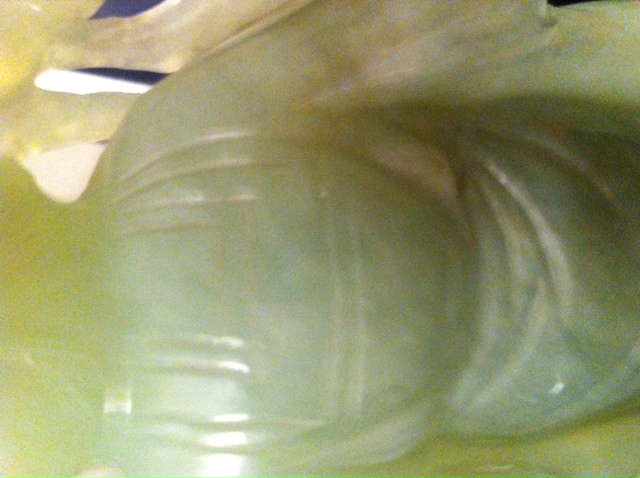 Thanks for the extra photo. There was just a chance there might be an inscription that would give us a maker's name, but almost all of these figurines are unmarked, so not to worry, collectors of these expect and understand that.

What you have is a very nice statue of the Chinese deity Shou Lao.

In Chinese legend he began as a star in the southern constellation of Argo, and is often called the Old Man of the South Pole. When the time came for him to be incarnated, Shou Lao was carried in his mother's womb for ten years before being born, and was already an old man when he was delivered.

He is nearly always depicted like this with a large swollen head (signifying wisdom) and a long beard (symbol of long life). He invariably carries a gnarly staff and the Immortal Peach which he has in his left hand. This is said to bear fruit every 3000 years and take a further 6000 years for a fruit to be ready to eat. Anyone who eats one will have their life extended by 600 years.

Hanging from the staff you'll also see a double gourd. This is another of Shou Lao's attributes, the grourd is filled with the Elixir of Life.

I've always admired these Chinese hardstone carvings and the workmanship on this one seems to be particularly fine. Notice for instance the carving of the hand holding the peach, not an easy thing to model so well in a material that's harder than glass.

Its always tough to put an exact date on them, but the stand and the style of staff with the dragon's head and the hanging gourd was a popular feature of the early 20th century, circa the 1920s/1930s.

Judging by the color, the material is most likely serpentine. It may be some other hardstone, such as bowenite or aventurine, but I'm 99.9% certain this is not true jade (even though these are almost always called "jade"). All of these hardstones are up there with jade in terms of hardness and density so are very similar.

This material is always a subject for confusion and misunderstanding because the word "jade" is a color as well as a species of mineral, so when something is described as "jade stone" it could be argued -somewhat duplicitously- that this is simply calling it "a green stone". And because a figure of this size made of true jade (and the only true jade is jadeite or nephrite) would be worth thousands of dollars, it's always tempting for vendors to "accidentally on purpose" use the ambiguity of the word to their advantage.

Authenticating true jade, that is, jadeite/nephrite, involves a combination of tests for density and hardness and electrical conductivity as well as examining the opacity and microstructure and color, so it's always been easy to stir up confusion and counterfeit with an unsuspecting buyer.

Having said that, this is all a red herring (or is that a jade herring?) because collectors understand that if it looks like jade and it comes from early 20th century China it almost certainly isn't, and they place value on other features of the item such as the age, size and beauty of the carving, or the color of the stone, rather than on the species of hardstone.

Yours is a nice example and Shou lao figures are popular at the moment.

He therefore has a full retail or replacement value of $1200 and is what you should insure him for.

I do hope this helps.

PS. If there's anything more I can help you with on this please don't hesitate to ask. If not, could you very kindly rate my services (with the stars or "accept" button) as this is how I get paid by JustAnswer at no extra cost to you. We can still continue to communicate here on this thread after you do.

Expert
Show more
Disclaimer: Information in questions answers, and Show More
Disclaimer: Information in questions, answers, and other posts on this site ("Posts") comes from individual users, not JustAnswer; JustAnswer is not responsible for Posts. Posts are for general information, are not intended to substitute for informed professional advice (medical, legal, veterinary, financial, etc.), or to establish a professional-client relationship. The site and services are provided "as is" with no warranty or representations by JustAnswer regarding the qualifications of Experts. To see what credentials have been verified by a third-party service, please click on the "Verified" symbol in some Experts' profiles. JustAnswer is not intended or designed for EMERGENCY questions which should be directed immediately by telephone or in-person to qualified professionals.