I have inherited several art pieces from a great aunt's 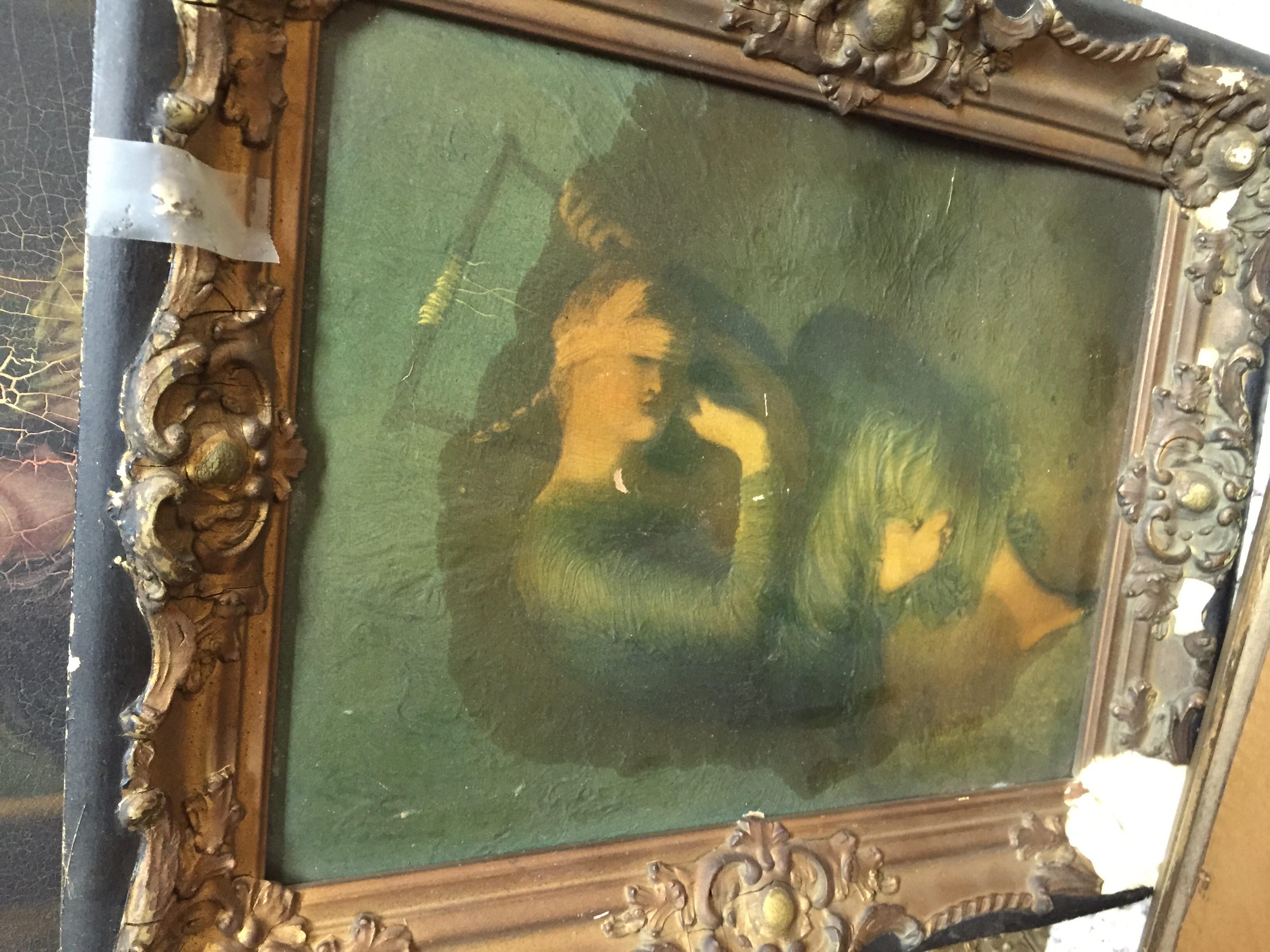 Hello and welcome! My name is Doris.
I have been an antiques collector, dealer and appraiser for over 56 years.
I will be pleased to help you.

Please know that I cannot accept any requests for "live conversations" such as phone calls. I must research data to give the most accurate answer.

Besides there are extra site charges to you for live conversations.

I can answer a question about one painting at a time because there is a lot of data to research with each painting/artist.

If you would like me to continue in this manner, I need to know the name of the artist.

I am so very sorry. I would have liked to help you.
Kind regards,
Doris 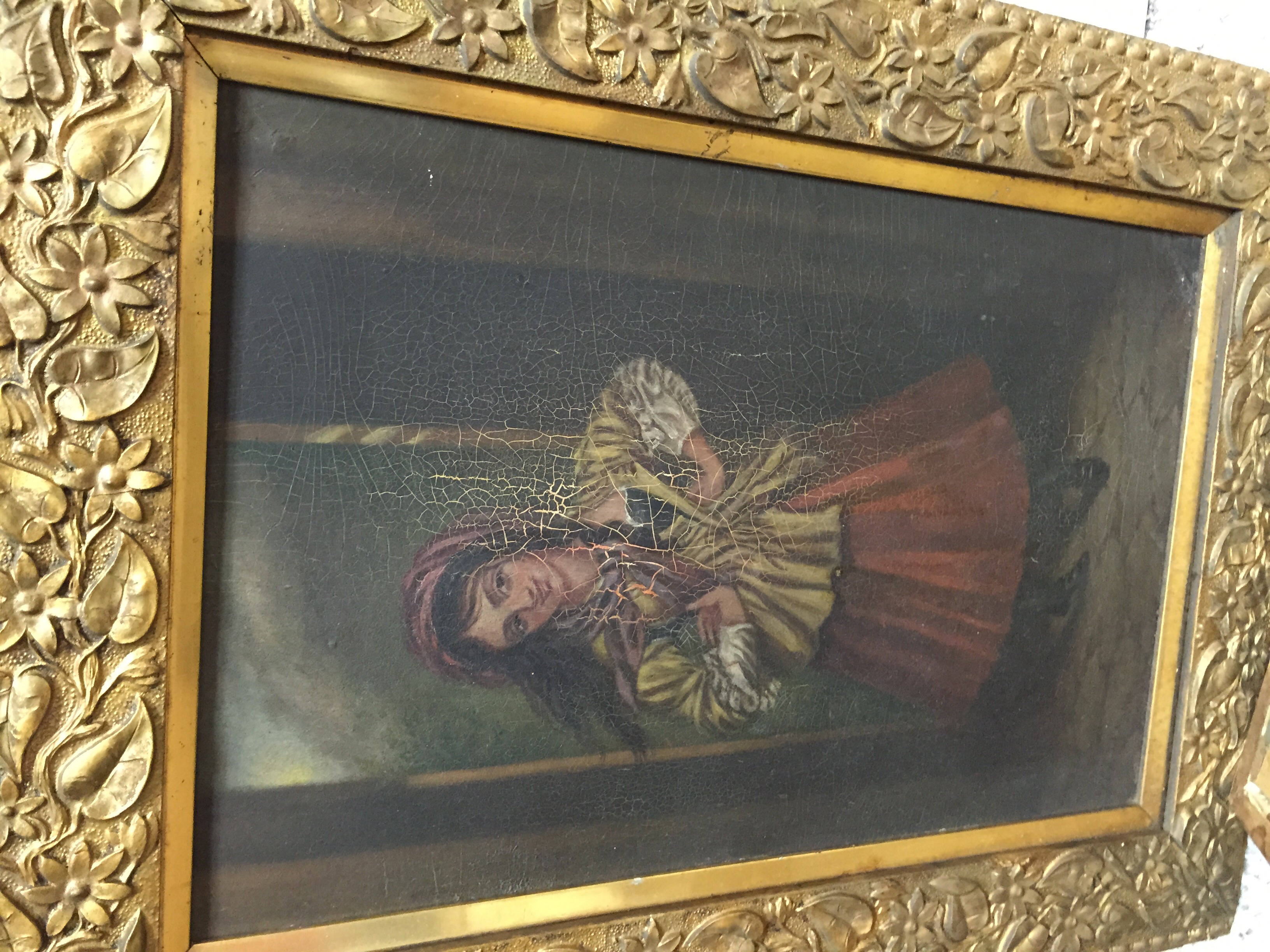 image.jpgimage.jpg
Customer reply replied 4 years ago
Here is another signature on a second one. 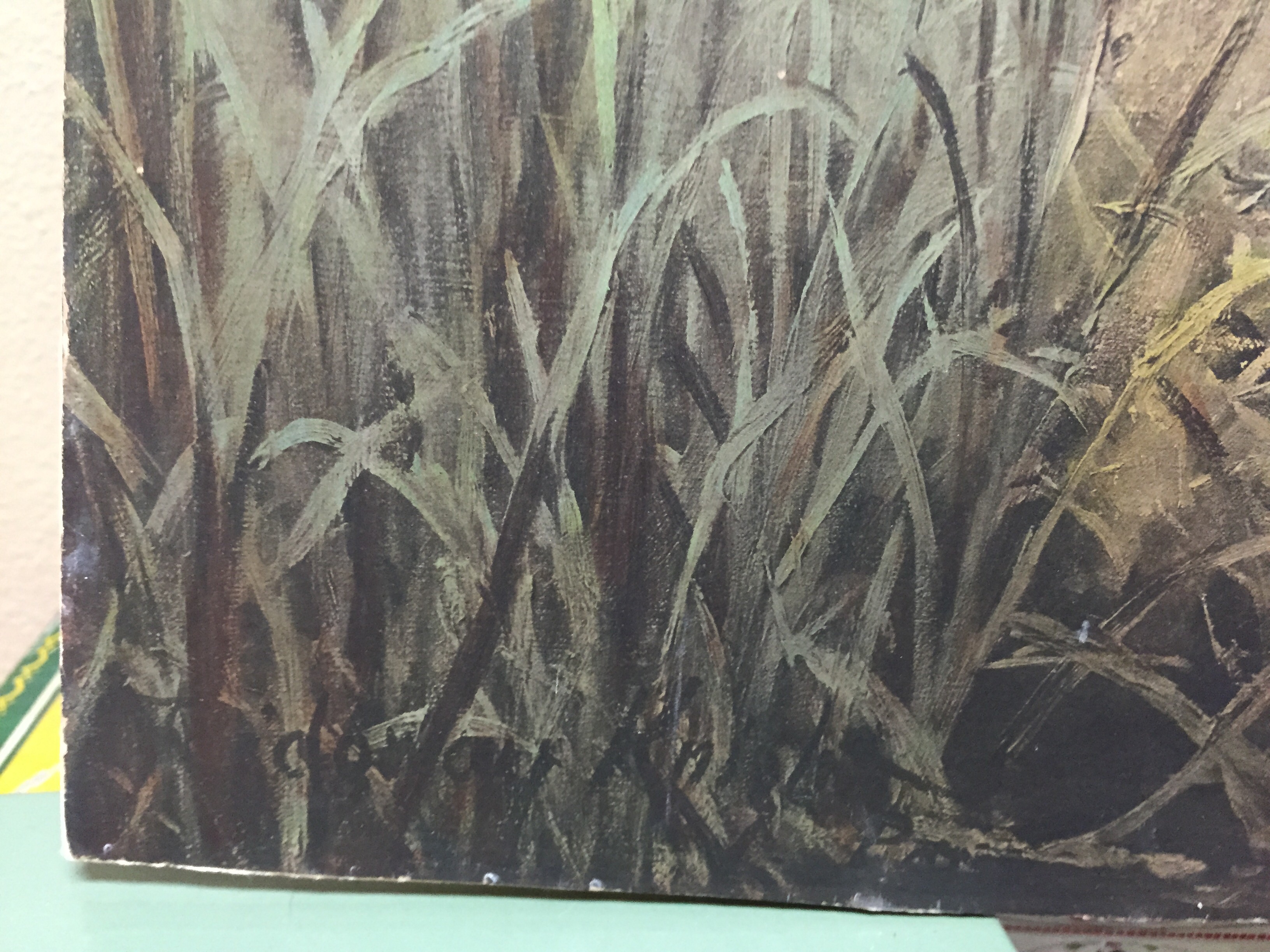 image.jpgimage.jpg
Customer reply replied 4 years ago
Here is the picture #2 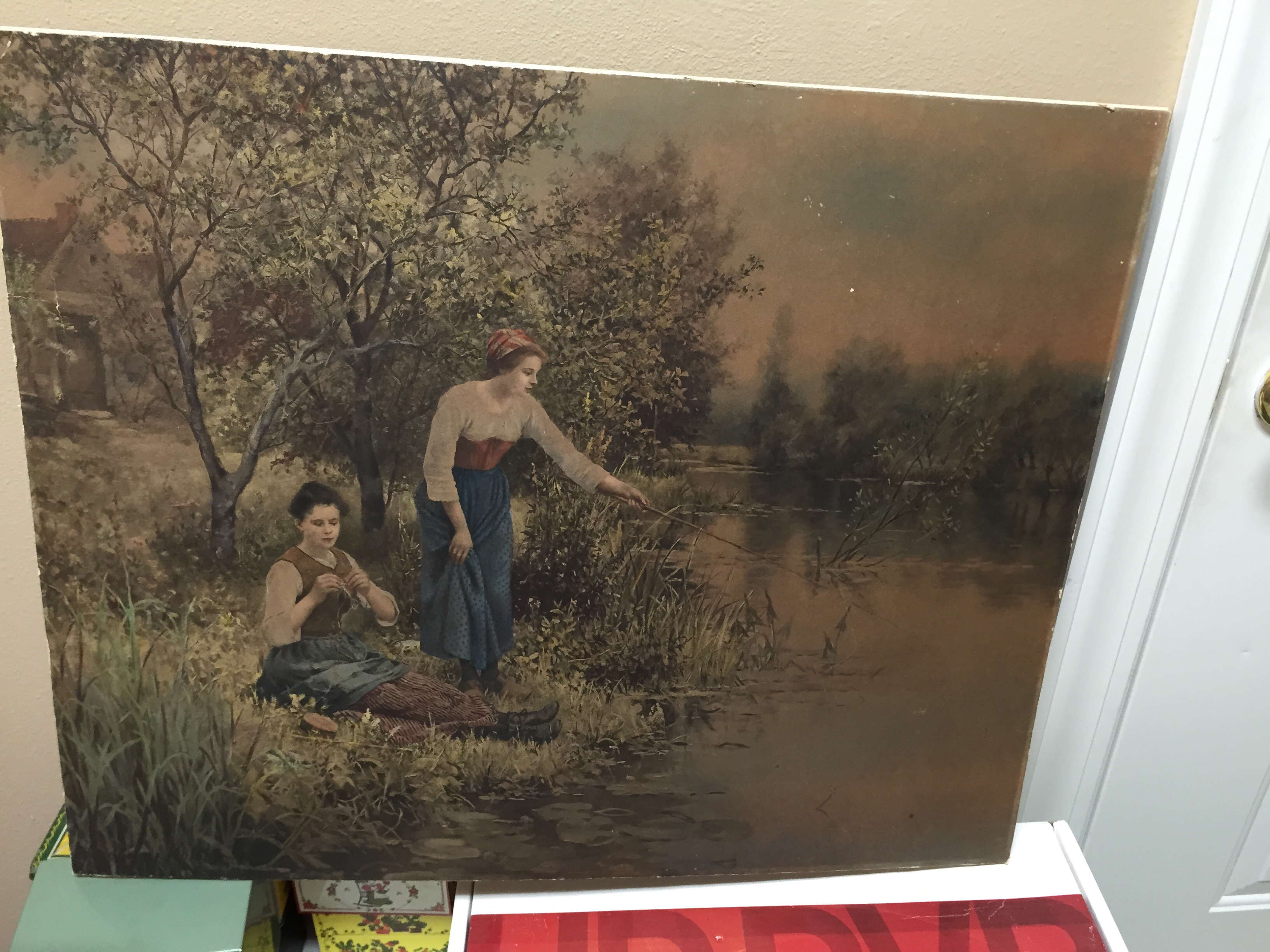 Here's what I can tell you:

Highly acclaimed American painter, originally from Chambersburg Pennsylvania but studied and painted most of his life in France.

The original of your painting

It was painted while the artist was in France. He did many similar riverside landscapes featuring healthy young peasant maidens, often in pairs, in beautiful bucolic narrative compositions such as this.

As a 1920s vintage reproduction chromo-lithographic print your picture would sell at auction in the range of $40 - $80. It therefore has a full retail/replacement/insurance value of $160.

This painting shows the allegorical figure of Hope blindfolded clutching a broken lyre with only one string left. The original was painted in 1886 by George Frederic Watts (1817 - 1904), an influential British member of the "Symbolist" movement of the mid-19th century, and looks like this:

It has been much copied by artists and illustrators ever since. And yours is lithograph print of a copy. You'll notice your version has the figure of Hope in large shell whereas Watts' original had her lying on the sphere of the world.

The print is not worth very much, perhaps $25 or so, but the frame is a different matter.

If you were to sell this late Victorian, ornate rococo frame, even with the damage that it has, it would fetch in the range of $100 - $200. It therefore has a full retail/replacement/insurance value of $200.

And finally we come to the interesting one!

(3) Full length portrait of a young girl in giltwood frame

(a) Need a close up photo of the back and also the detail around the face of the girl.

(b) Is it signed? If so, a sharp close-up of the signature.

(c) Dimensions of the picture (not including the frame).

Seems like your great aunt was quite an art lover.

Customer reply replied 4 years ago
Here are the additional pictures. Inside the frame the picture measures 10.5x17. I found the picture at my Dad's house, in the attic, hanging above the water heater. It's not on canvas & is probably just another litho although I did find James F Nagle mention in the artist database of the New Orleans Historic Collection. My great aunt was born & died in NOLA 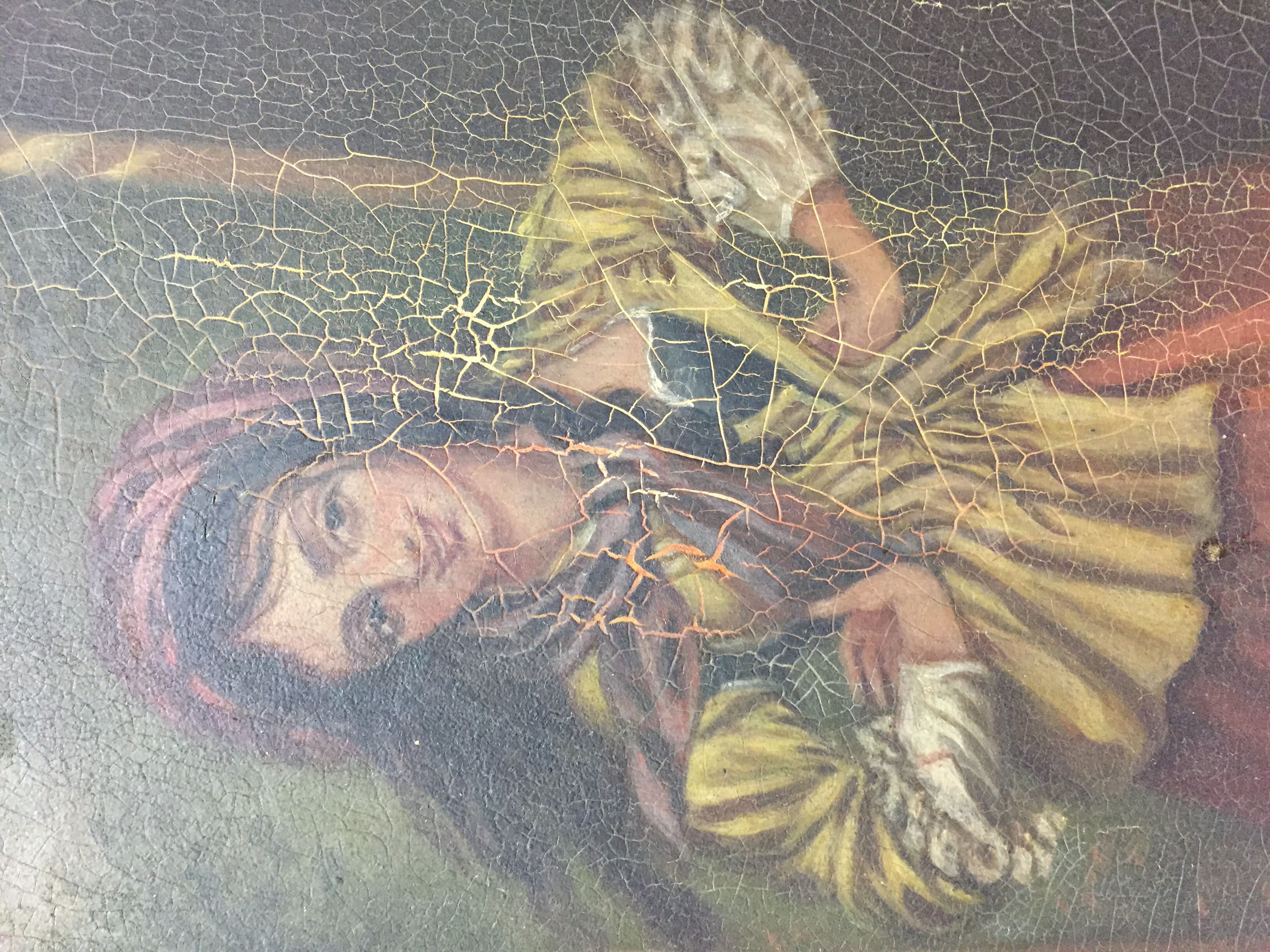 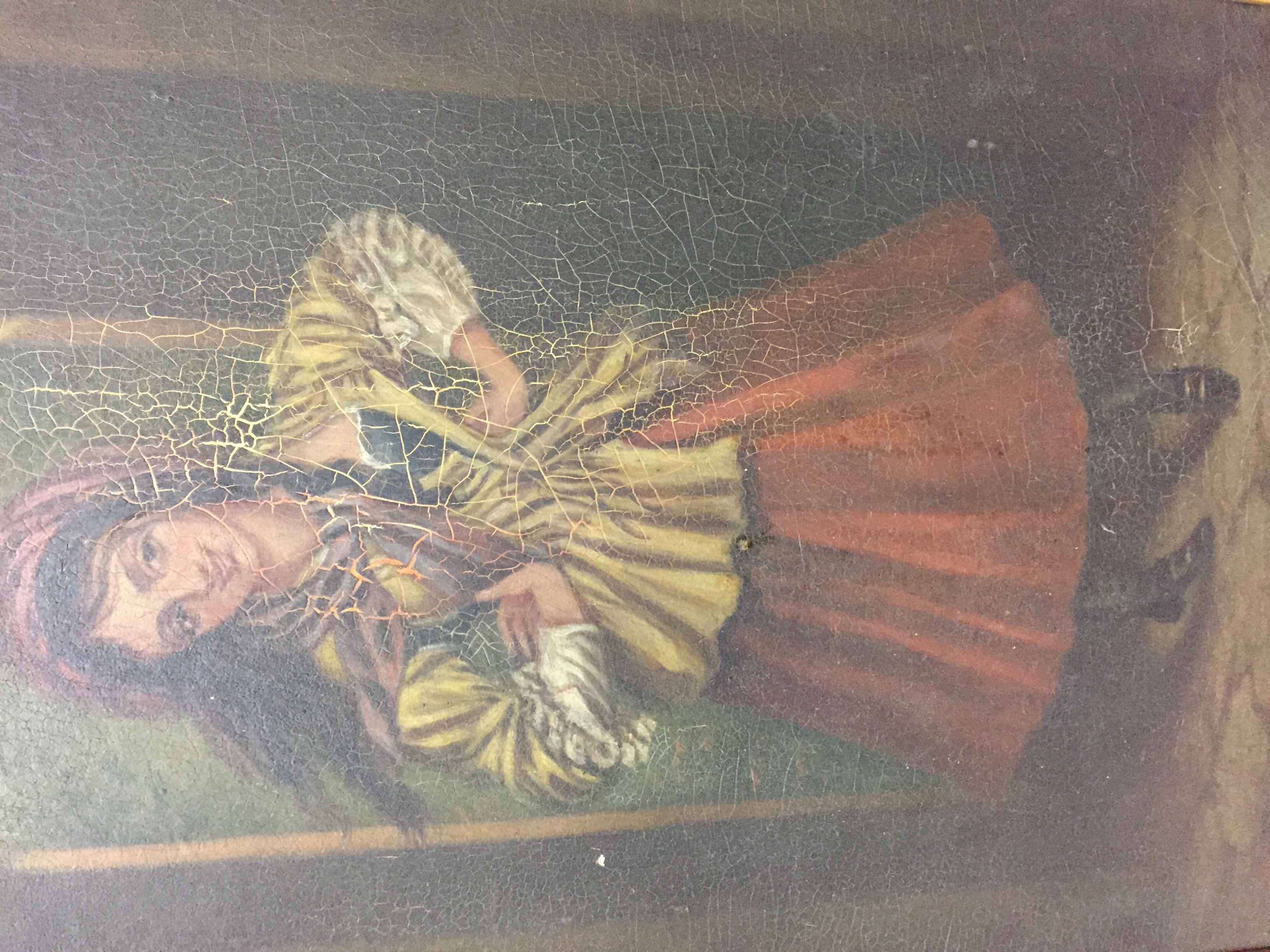 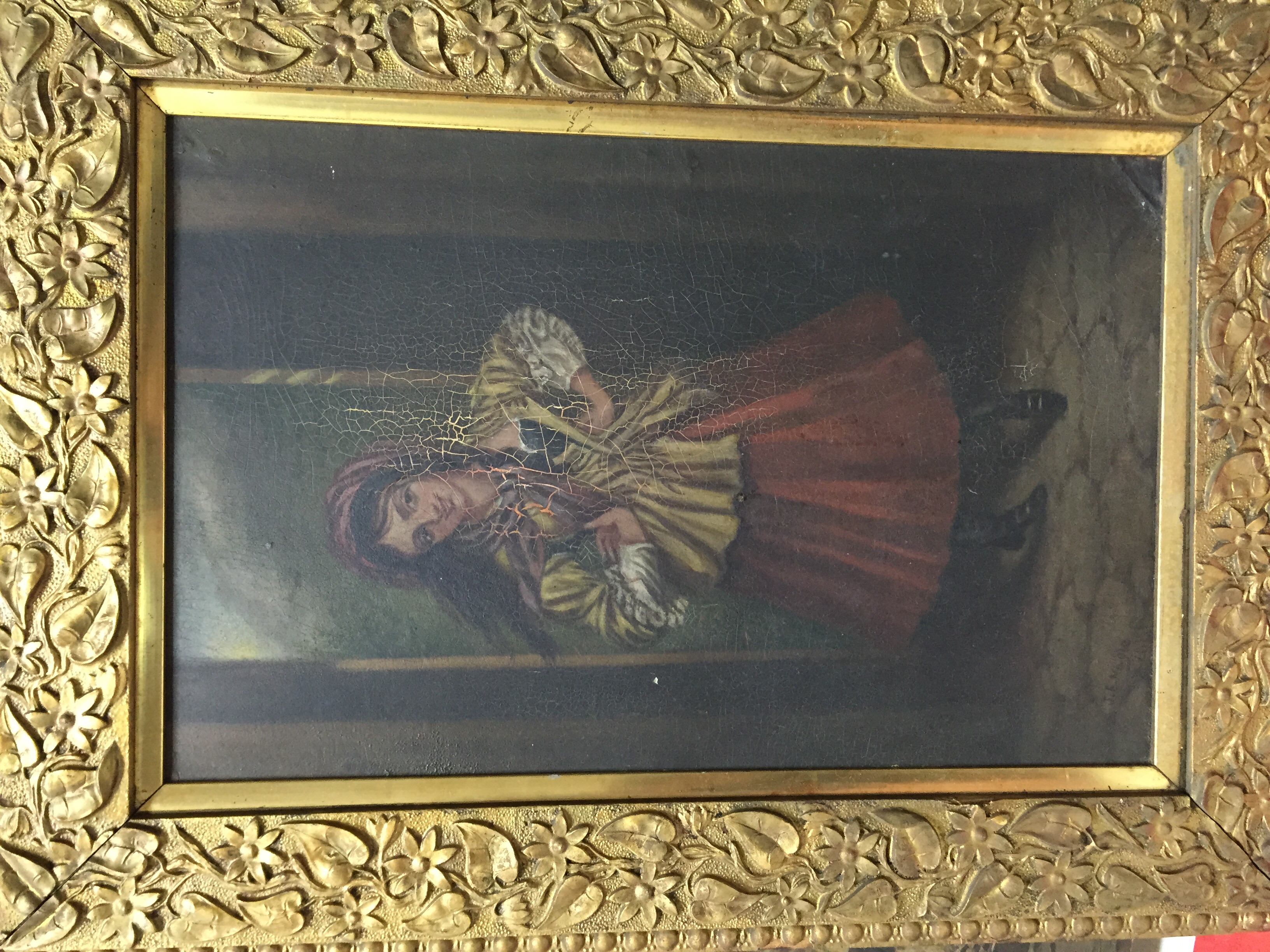 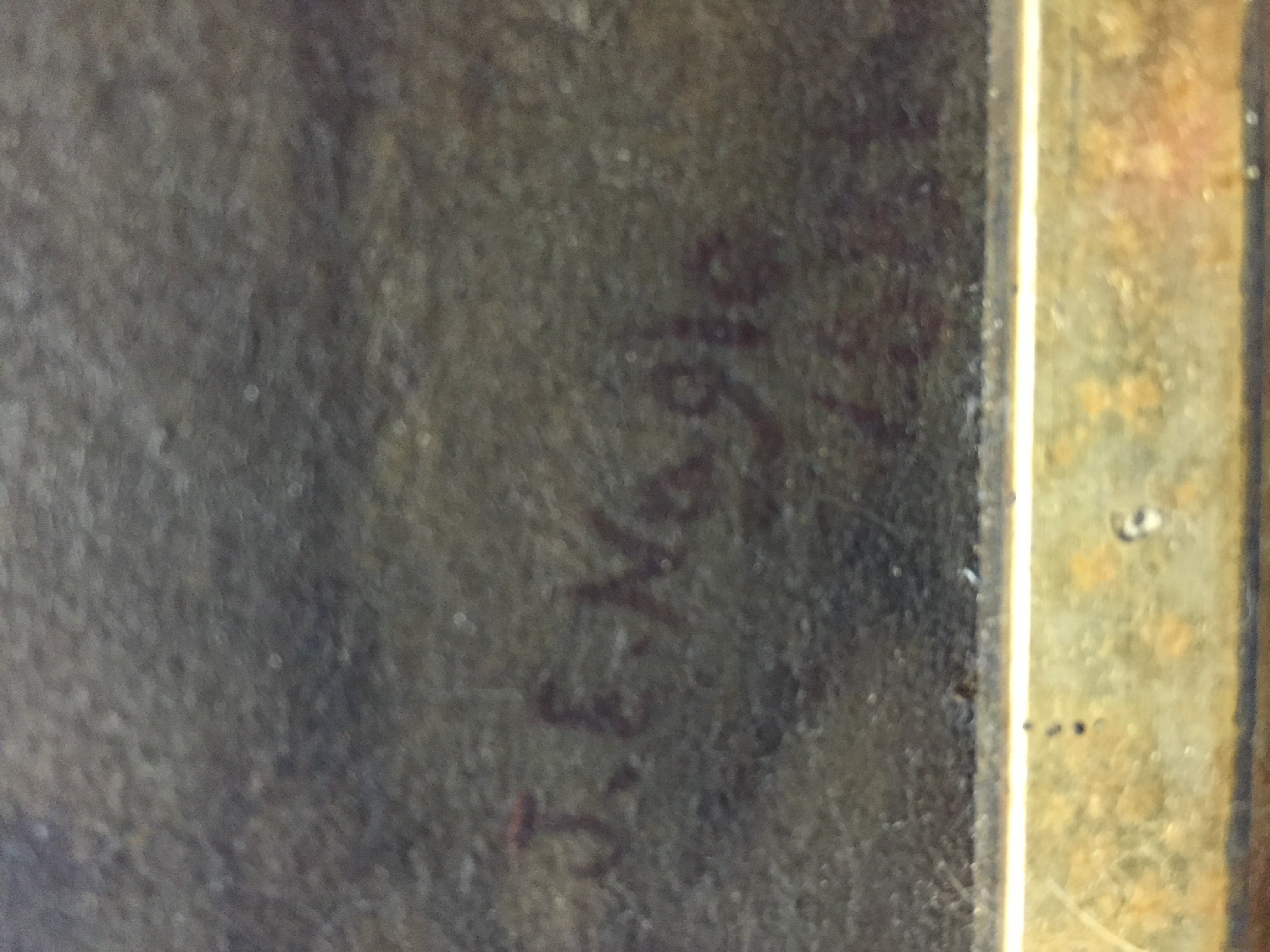 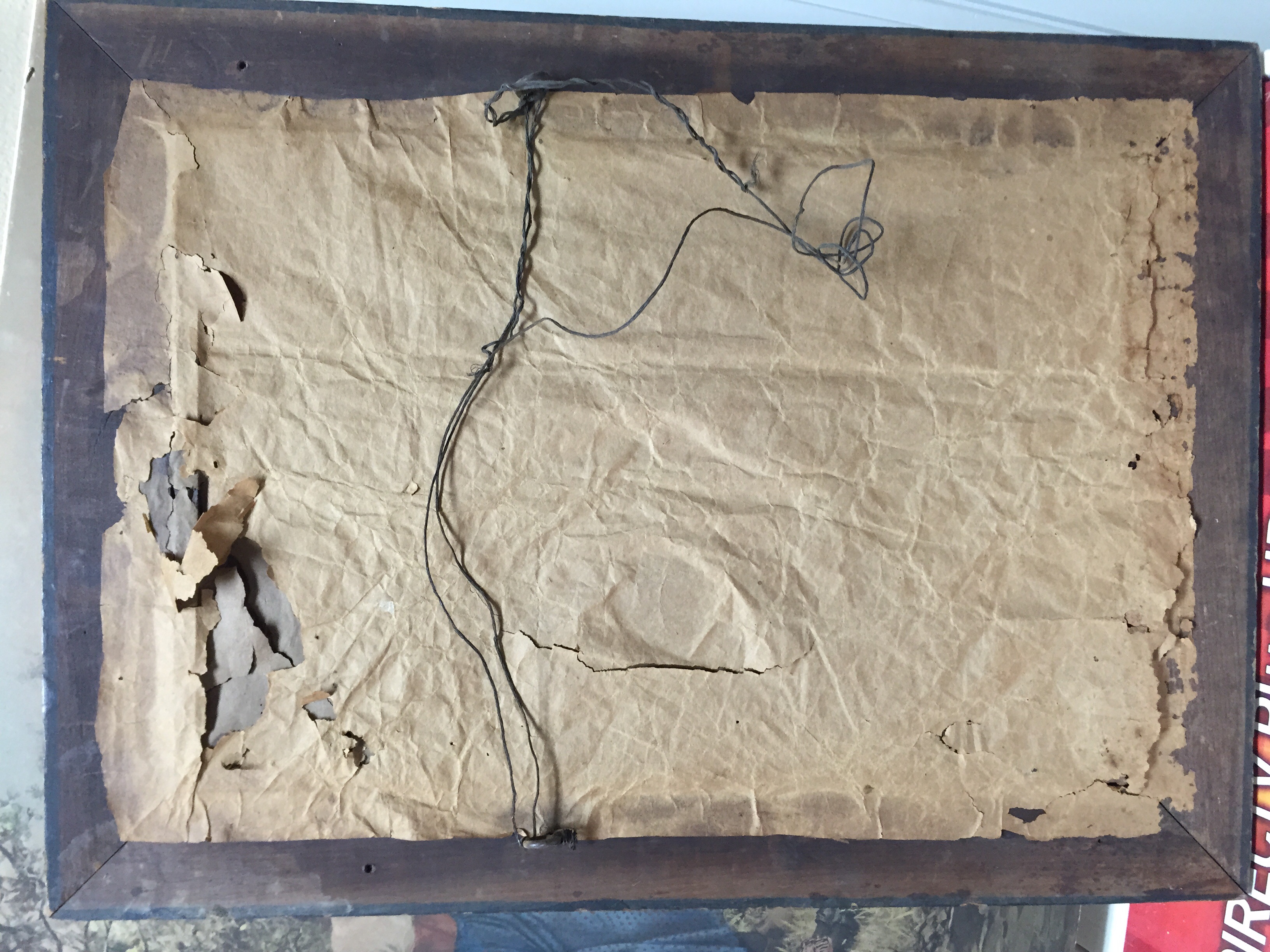 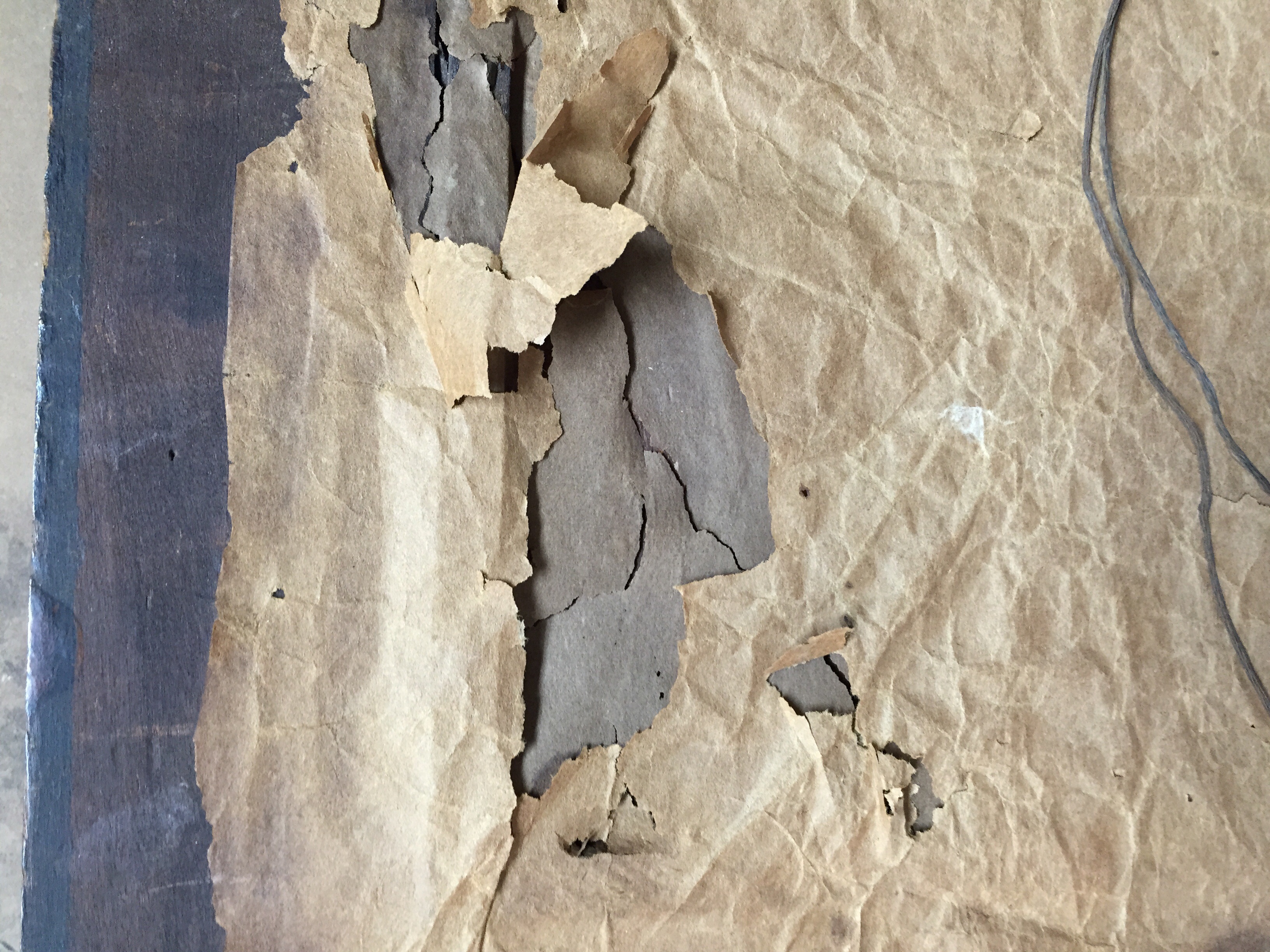 Thanks for the photo and dimensions, could you very kindly attach the other images you mentioned, only one came through.

Is this on a wood board? Or hardboard? Or some other material?

Customer reply replied 4 years ago
My phone is taking forever. I'm going to try sending the photos this way. It appear to be hardboard, it's not print stock. I'm going to send the pics individually. 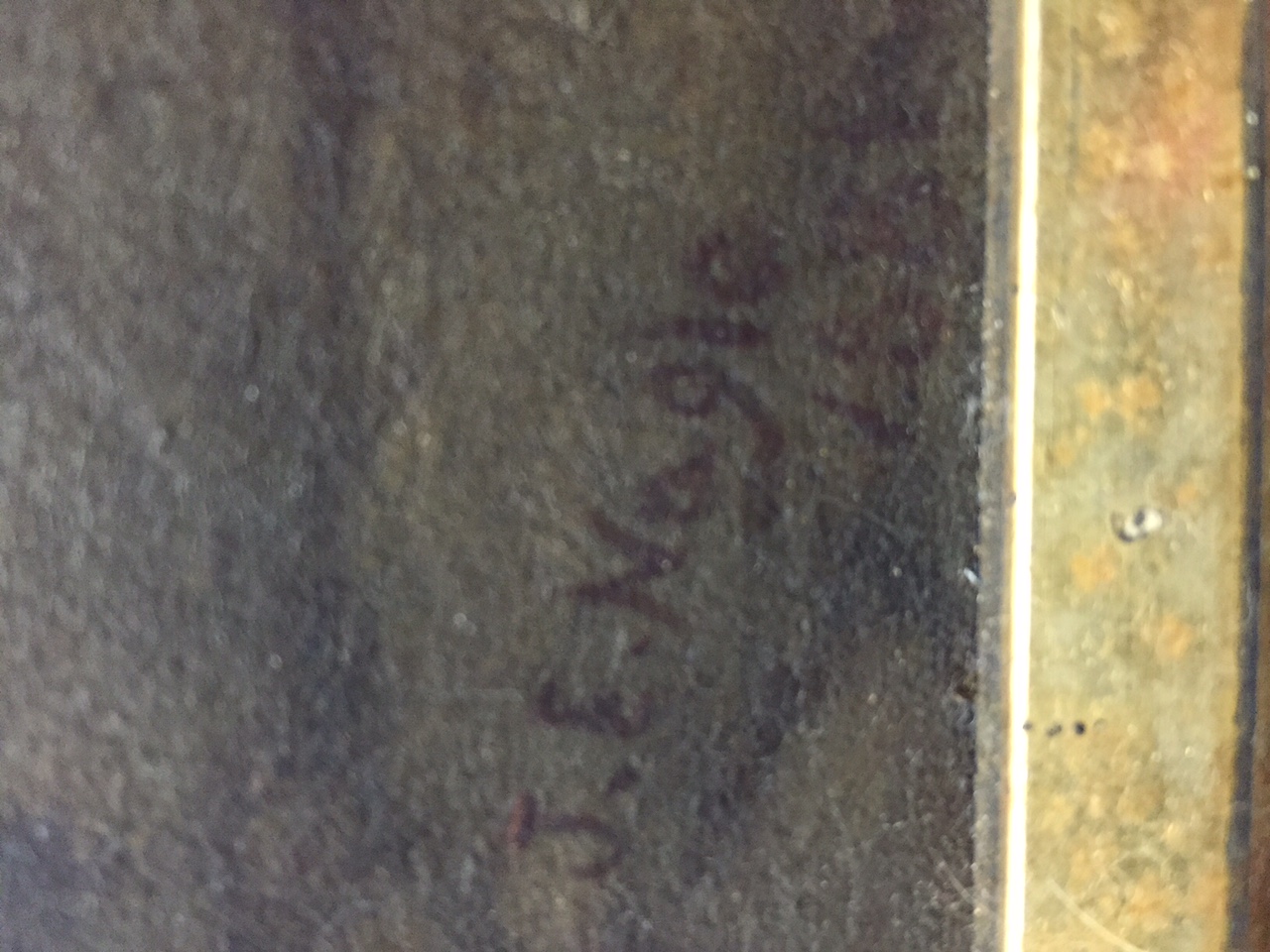 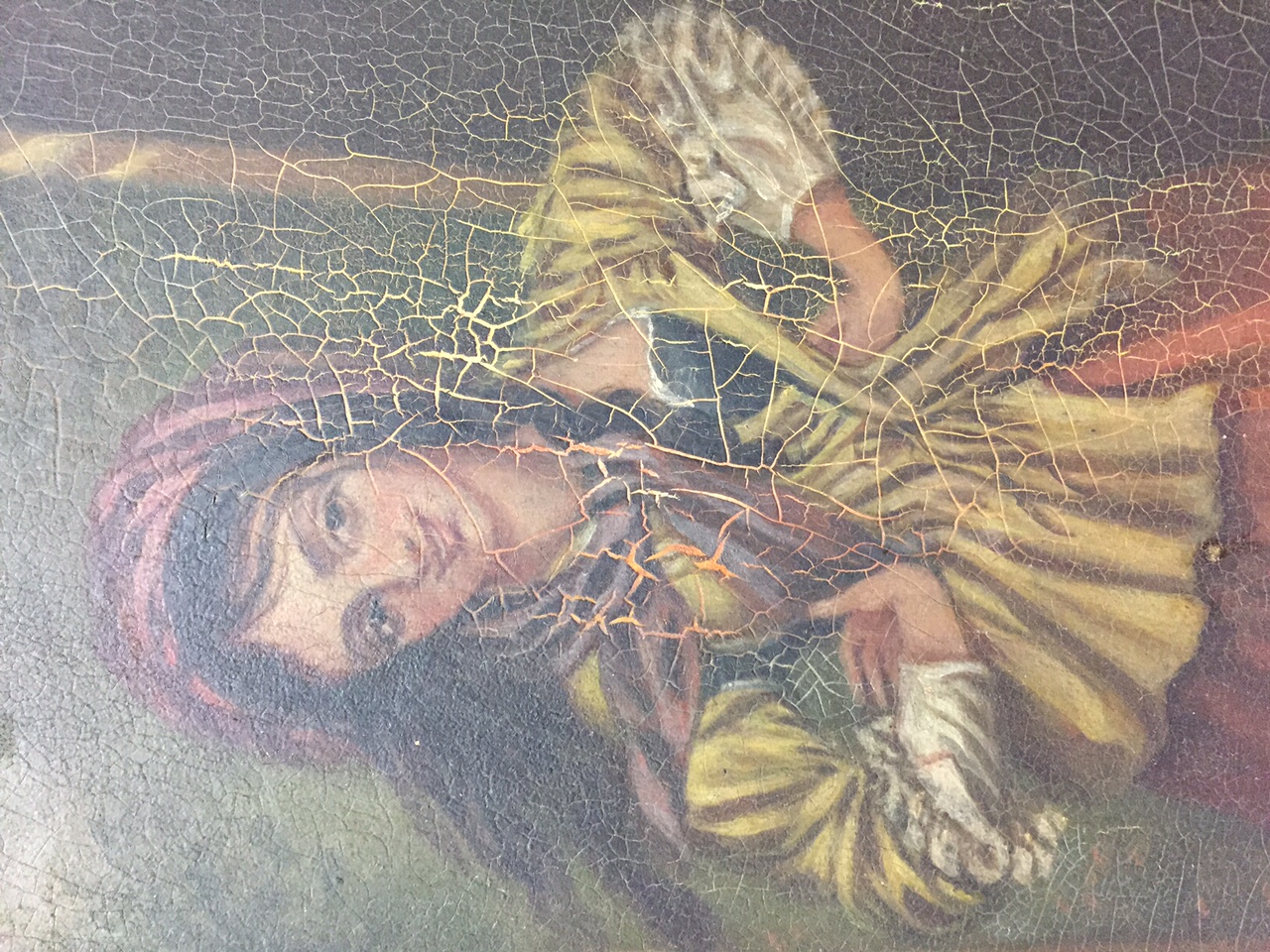 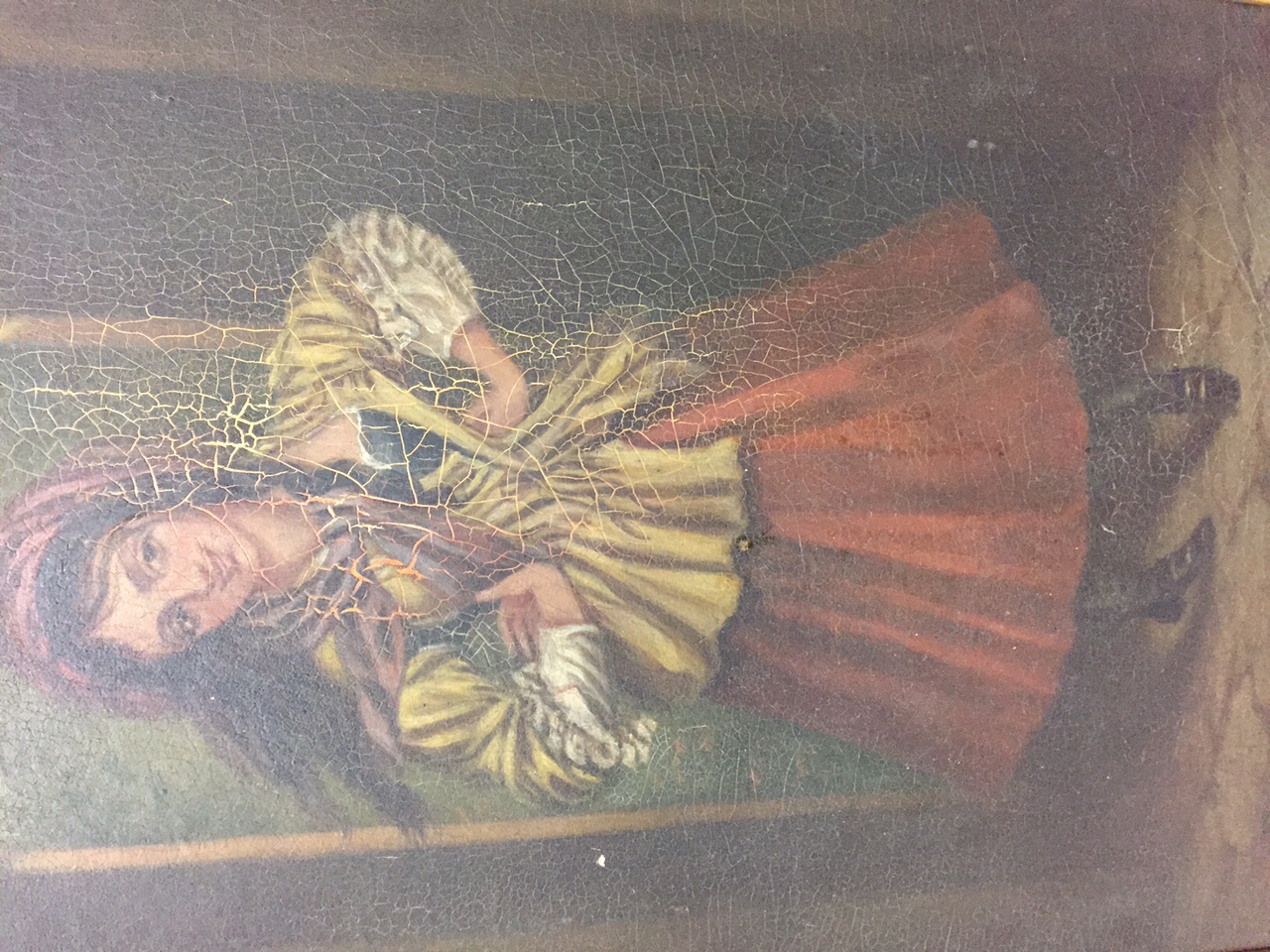 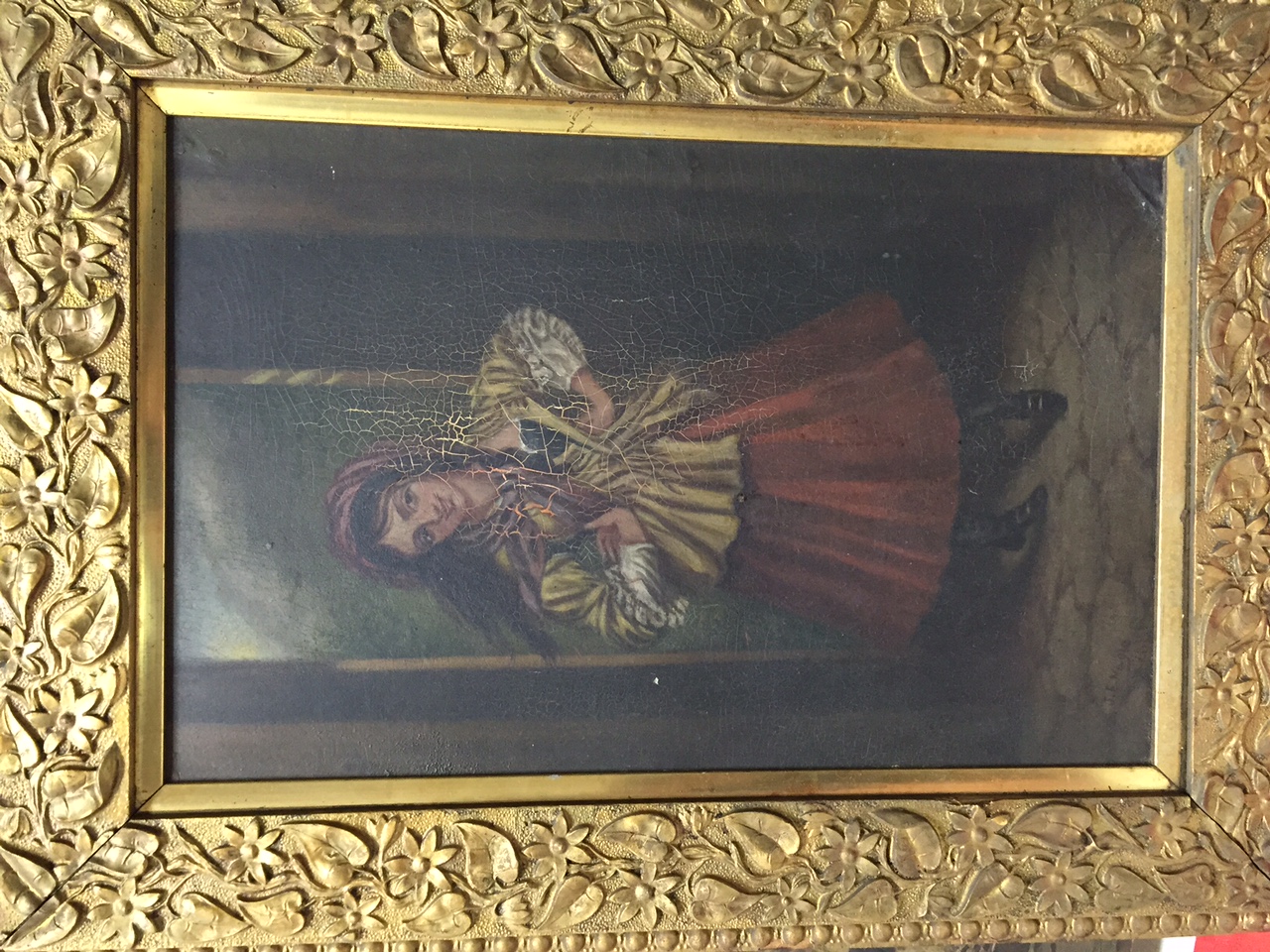 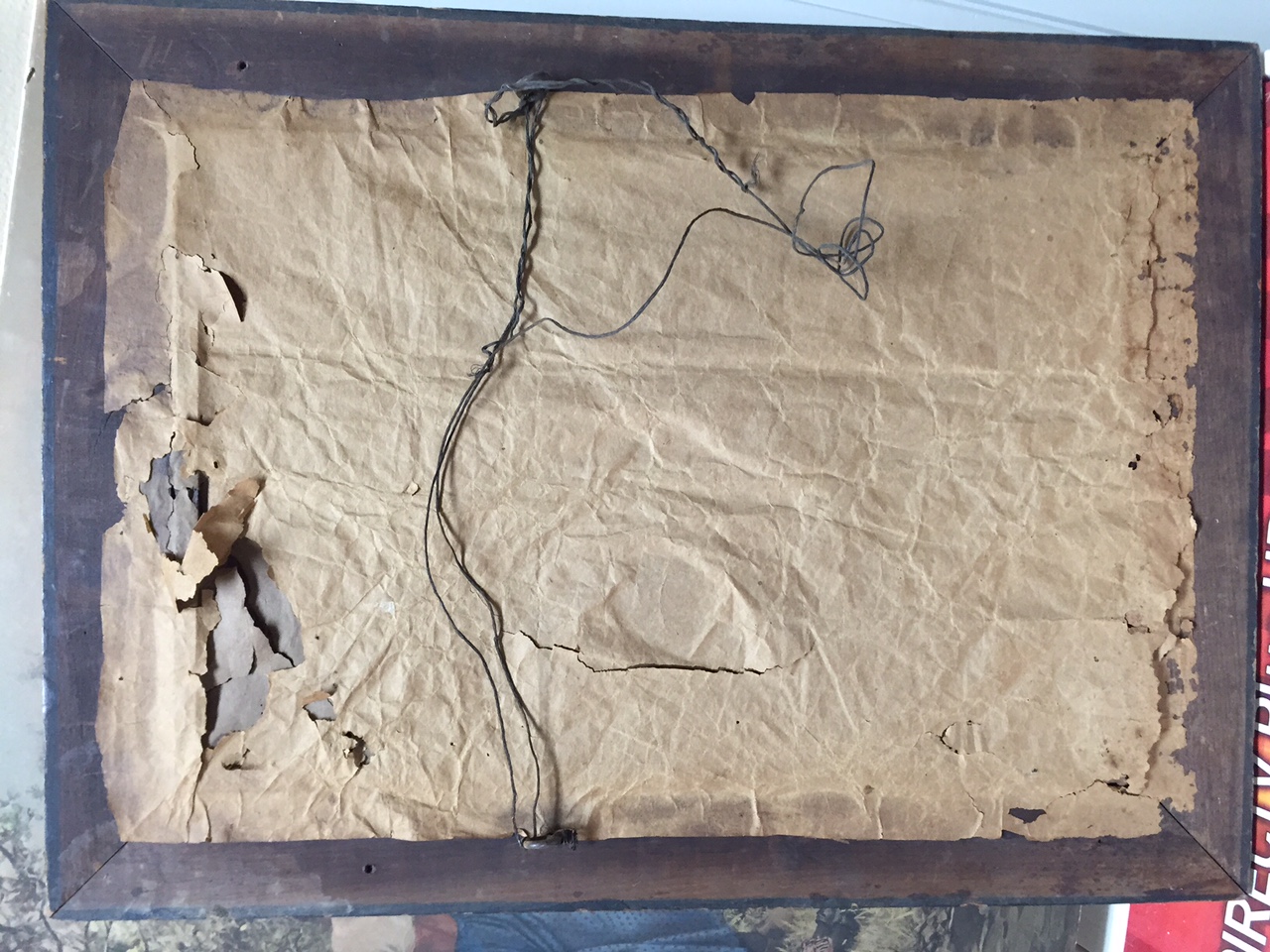 back.JPGback.JPG
Customer reply replied 4 years ago
6 That should do it. Hope it helps. 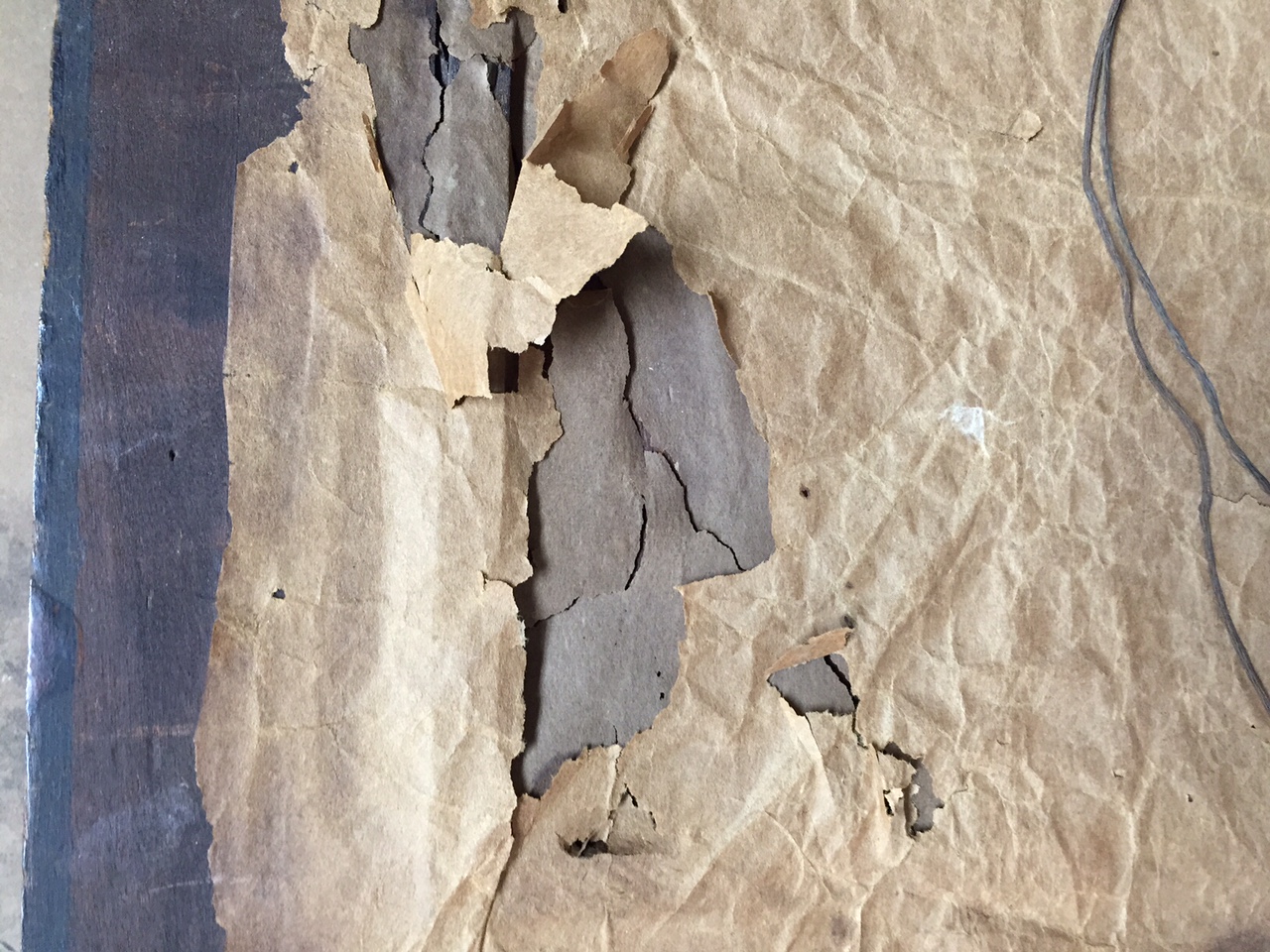 Thanks for all the great photos, that tells me a lot.

The more I look at this little girl the more I like her. She has an engagingly coquettish expression as she dances a jig in through the open door. Is she a little Irish girl with her 18th century buckle shoes? Perhaps. It's certainly a charming little folk art composition painted by a self-taught artist.

If this Nagle is listed as a New Orleans artist, I certainly can't find him. There is no-one as a listed artist with the name James F.Nagle (as you read it) that I can find in my references.

I do have a record of a J.E.Nagle (that F looks more like an E to me) who's listed as a print engraver in New York active in the 1830s, which could be the same person, but it is a little early for the date of 1881.

I think this could well be an original oil painting, painted in gouache onto paper lined cardstock instead of canvas. I find it difficult to believe it could be a print as why would a publisher go to the considerable expense (as color printing was in those days) of reproducing an unknown, commercially unproven artist, when there were so many other famous paintings to choose from.

Either way, I think it's intriguing and the frame, with its pretty vining flowers and leaves in raised relief, is also highly decorative, not to mention the New Orleans provenance which, taken all together, would generate quite a bit of interest at auction. I can see this picture being bid up to several hundred dollars, perhaps in the $300 - $500 range and it therefore would have a full retail or replacement value of $900 for insurance purposes.

PS. If there's anything more I can help you with on this please don't hesitate to ask. If not, could you very kindly rate my services (with the stars or "accept" button) as this is how I get paid by JustAnswer at no extra cost to you. We can still continue to communicate here on this thread after you do.