I have a set of...
I have a set of 12 of these plates. The are 9 1/4" in diameter. They are from the Hoover Vacuum Estate and are in beautiful condition.
Show More
Show Less
Ask Your Own Antiques Question 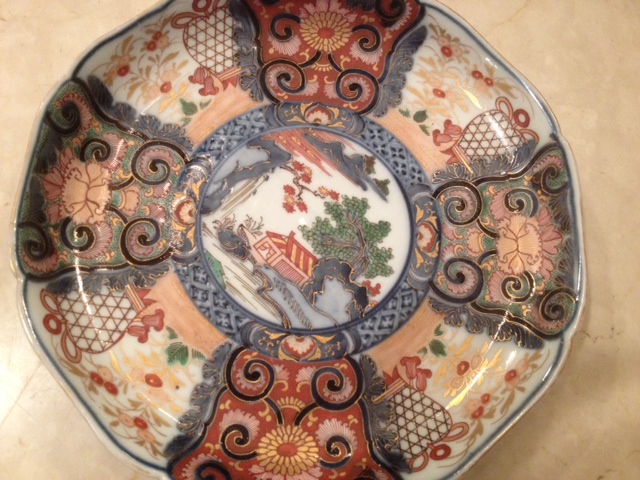 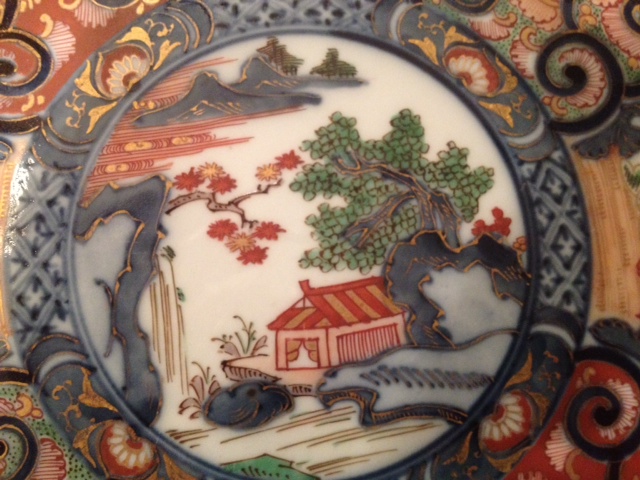 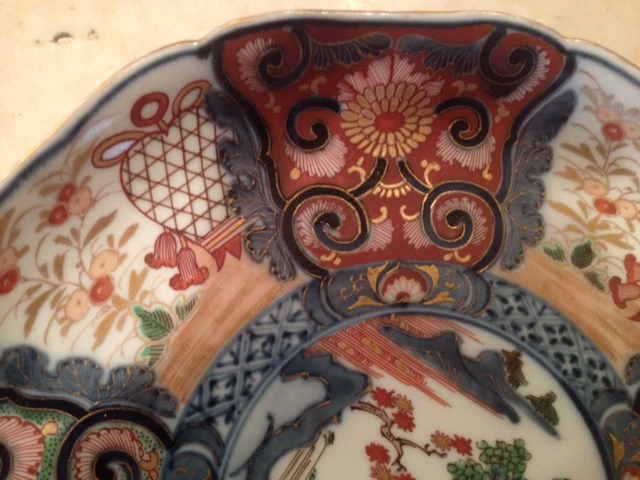 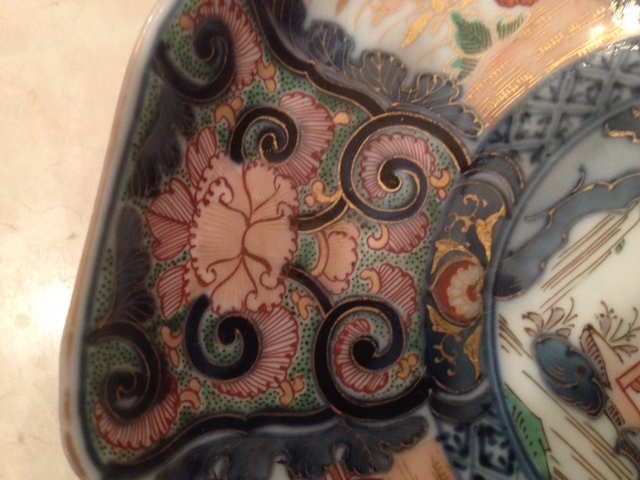 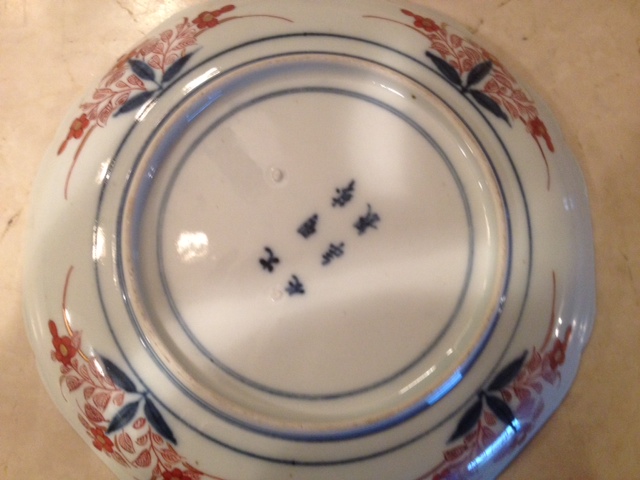 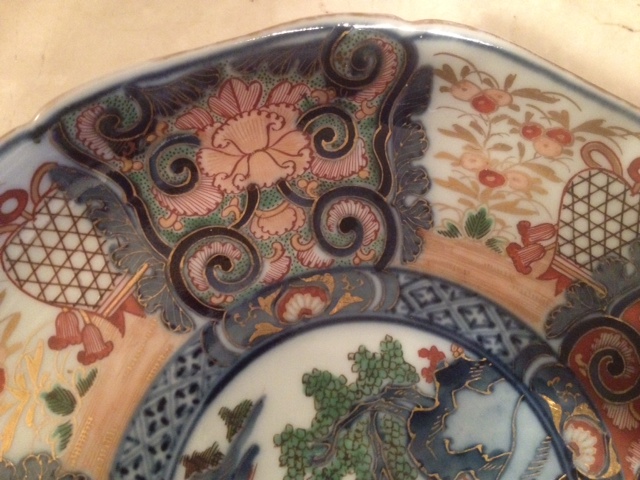 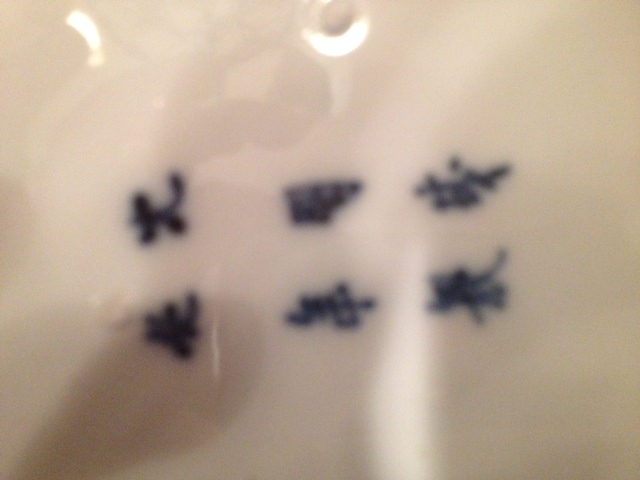 Can you very kindly do a couple more of the marks in better focus so I can read the inscriptions for you.

I find the best way to get them in focus is to pull back and take the whole of the back of the plate. Then I'll do the zooming and enlarging this end.

The secret is to take loads and delete as to go until you get a good one.

Hi! It's okay, I've figured out the inscription, so no need to add more photos.

This is a superb set of early 19th century, late Edo period, Japanese Imari plates, densely and expertly decorated in underglaze blue (sometsuke) and a palette of bright overglaze colors (known as aka-e) dominated by rust red and highlighted in gold enamel. The contrasting design of brocades, flowers, scenic panels and gold accents is known as some-nishiki which became all the rage in European markets from the late 1600s.

Japan took advantage of political turmoil at the end of Ming dynasty China that caused a dramatic drop in the production of Chinese export porcelain. The Dutch East India company arrived at the port of Imari in south-west Japan seeking an alternative source for their lucrative trade with Europe. The porcelain they found was every bit as well made and beautifully decorated as that which they were used to from the Chinese imperial kilns at Jingdezhen.

The Japanese porcelain was actually made a few miles away in and around Arita, an area owned and run by the feudal Nabeshima clan whose chief also owned the kilns and decorating shops. The manufacture of the porcelain and the painting of the porcelain were divided into two separate factories, deliberately to prevent any one person or persons knowing the full process so that no trade secrets could be taken elsewhere to create a rival operation. Their output came to be known as "Imari" simply because that was the name of the port where it was loaded onto Dutch ships for export to the west.

Part of the reason for telling you this history is that it helps to explain the marks on the back that might seem strange without the context.

or, reading in columns, right to left, 大明成化年製 which translates as:

The Chinese emperor Chenghua ruled from 1465-1487. It became frequent practice to add Chenghua marks during the 18th and 19th century. But why put fake Chinese marks on Japanese porcelain, you ask? You have to remember that Imari production was still a fledgling industry when they first started doing it. Imari came into being because it filled a gap when Chinese porcelain was in decline and the wares had to look like what they were replacing. The Chenghua marks added "Chinese-ness" reassuring the Europeans that it was authentic, and besides, the Chinese were also in the habit of putting old Ming marks on their own output during the 18th and 19th centuries. It was only later that Imari became distinctive enough to be a decorative institution in its own right, and had no need to pass itself off as "me-too" Chinese, that they could afford to drop the practice. Despite this, use of the Chenghua marks continued, simply out of tradition, so they are not a very reliable indicator of age as they started doing it in the 18th century and continued spottily well into the 20th century.

So we have to look at other ways of dating these. One is by way of the spur marks on the back. The center of each plate was supported on tiny clay 'stilts' or spurs that prevented the porcelain slumping and fusing with the saggar (a protective ceramic shell encasing each plate) in the kiln. The stilts were broken away after firing leaving the spur mark. Spur marks started appearing in the early to mid-1800s. The other indicator of age is the color of the blue which in this case is more of an indigo indicating a pre-1850 age. After that time industrial cobalt blue began arriving from the West and blues became more pure, with less black and often with a violet hue.

So coming to value, sadly Japanese porcelain has been in the doldrums for at least the past twenty years. There has been a slight rise lately caused by the unprecedented interest in all things Chinese, but values are still way below what they should be, except for the really good stuff. And this would qualify as such. If you were to sell these at a top antique auction house such as Bonhams, Christies, Skinners, etc, they would fetch in the range of $150 - $225 per plate. So a set of 12 would have a pre-auction estimate of $1800 - $2700.

They therefore have a full retail or replacement value of at least $5000 and is what you should insure them for.

I do hope this helps!
Best wishes,
Robert

PS. If there's anything more I can help you with on this please don't hesitate to ask. If not, could you very kindly rate my services (with the stars or "accept" button) as this is how I get paid by JustAnswer at no extra cost to you. We can still continue to communicate here on this thread after you do. Many thanks. R

Many thanks for the rating and kind bonus, much appreciated!

Diana F.
Appraiser
Bachelor's Degree
10,108 satisfied customers
Show more
Disclaimer: Information in questions answers, and Show More
Disclaimer: Information in questions, answers, and other posts on this site ("Posts") comes from individual users, not JustAnswer; JustAnswer is not responsible for Posts. Posts are for general information, are not intended to substitute for informed professional advice (medical, legal, veterinary, financial, etc.), or to establish a professional-client relationship. The site and services are provided "as is" with no warranty or representations by JustAnswer regarding the qualifications of Experts. To see what credentials have been verified by a third-party service, please click on the "Verified" symbol in some Experts' profiles. JustAnswer is not intended or designed for EMERGENCY questions which should be directed immediately by telephone or in-person to qualified professionals.