, I have recently acquired a Royal Doulton Burslem ewer/vase.

Hi, I have recently acquired...
Hi, I have recently acquired a Royal Doulton Burslem ewer/vase. The handle was cracked but I have had it professionally restored. The Doulton Mark is the four interlocking D's, with a crown atop them (no 'England' underneath) which I think dates it to around the 1880's. There is a 'C' number: C337. Then there are several other markings which I can't quite understand. There is a JB hndpainted artist's mark just near the Doulton Mark (which on research looks to be John Broad), but right inside the base are several other markings:
44
P.GW. 3636 (or 3b3b?)
I know ***** ***** was also around at the time, does the 'P' stand for "Painted'...please could you help me to decipher!
Many thanks.
T
Show More
Show Less
Ask Your Own Antiques Question
Share this conversation

Could you very kindly attach a photo of the vase itself and also a complete one of the base so I can see all the various marks you mention.

Also, how tall is it?

Thank you for your email re my Doulton ewer.jug. I have uploaded several images of it to Imgur...the link to the album is as follows:

I have taken one next to a tape measure, but the jug is approximately 12 inches tall.

I look forward to hearing from you.

Antique Expert: Robert S., Antiques and Collectibles Researcher replied 5 years ago
What a beauty! Thanks so much for the album of excellent photos, Trish. Most helpful!
At least two artists worked on this piece. Let me do a little research and I'll have a full answer for you as soon as I can.
Customer reply replied 5 years ago

Thank you for your reply - I thought it rather beautiful too. I would love to know how it came to be sitting in the window of a rather unremarkable antiques shop here in Cape Town (although South Africa does have strong English connections).

The owner told me no-one wanted it because it had a bro***** *****dle...he sold it to me for around GBP11/$20. It costs a little more than that to restore, but I would have done it for the sheer pleasure of seeing it restored to it's original glory. I am very new to collecting antiques and have discoved that I love the treasure hunt and research into the items...I would imagine that's why you do what you do. I have a particular interest in the Rococo Period, but my English heritage kicks in when it comes to Royal Doulton!

I thought two artists might have worked on it, too...that's why I wondered if the 'P' might stand for 'Painted by'.

I look forward to hearing anything further you may discover.

This is a wonderful vase, lavishly decorated in raised paste gold enamel, color enamel jeweling and beautiful hand painting. It's a mixture of styles and revivals, so popular with the Victorians, who liked to cherry pick from every decorative age and region. It has mainly Aesthetic Era influences, particularly in the superb frieze of carnations or pinks, painted in-the-round and, as was so typical of the Aesthetic Era, rendered with a precision bordering on botanical illustration. The ewer shape itself with its exaggerated flare to the rim hints of Art Nouveau and the wonderful gold bands of arcading are Renaissance revival.

In the upper and lower registers you can see both Japanese and Isnik (Iznik) decorative motifs. Isnik in Anatolia is where the acclaimed "Persian" pottery sprang from in the 15th century (though Isnik is actually in Turkey) where a happy merging of east and west took place with both Ottoman and Chinese elements in the designs. The result was the best of both worlds and it fascinated the avant garde of English decorative design in the third quarter of the 19th century, notably with the pre-Raphealite artists and designers such as ***** ***** -who in turn strongly influenced the great ceramic artist William de Morgan - who was working next door to Henry & James Doulton in Lambeth who, in the 1880s, were employing about 370 artists making salt glazed stoneware, the predecessor to the art pottery that yours is an example of. And so there's very traceable line of "monkey-see-monkey-do" to your vase.

It was made in the early years of the slow transfer of the Doulton operations from the smog and soot of Lambeth in London to the (relatively) clean countryside of Staffordshire. In 1878 James & Henry Doulton took over a factory in Burslem called the "Pinder Bourne Works" changing its name to Doulton Burslem in 1883 and the artistic merit of its output eventually surpassed that of Doulton Lambeth.

When I saw the first photo you sent I thought like you, there's the JB mono for John Broad. But he was a Doulton Lambeth artist, worked entirely in stoneware and his signature was normally inscribed into the clay. Here's what his JB looks like: 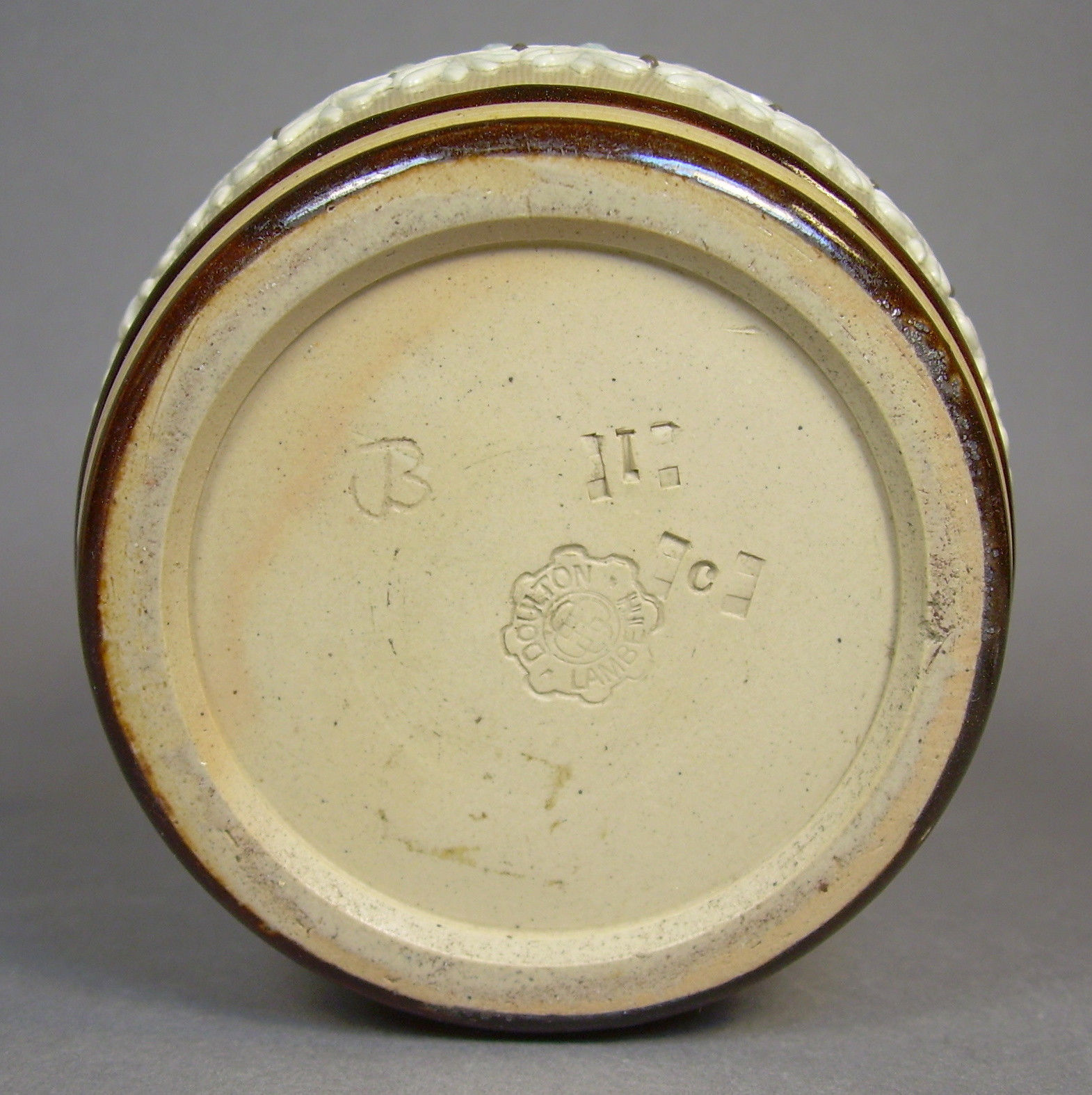 I believe your artist was James Boulton who worked for Doulton Burslem from 1880 - 1917 and specialized in floral painting.

The assistant decorator "P.G.W." is unattributed.

This era of Doulton Burslem when John Slater was art director is considered to be its heyday, so you have an example of the best of the best here.

Sadly the market for Doulton is seriously depressed at the moment and way off its peak before eBay came along and we all discovered that formerly 'unique' pieces were not so unique after all and prices suffered even for the good stuff such as this, which generally is unique and will remain so.

As with all "museum quality" Doulton it's tricky to value as there are no comparables in the sales records. The restoration of the handle must also be a factor, but a true collector will make allowances for that, knowing that condition is unimportant when the chances of finding an example in better condition are virtually zero.

If you were to sell this at one of the top auction houses such as Bonhams who specialize in Doulton, I would say it would fetch in the range of 6000 ZAR - 9000 ZAR.

What a great find!

Antique Expert: Robert S., Antiques and Collectibles Researcher replied 5 years ago
Many thanks for the rating and kind bonus. Much appreciated!
Was this answer helpful?
Yes
No