I have a blue & white china [Japan sticker on bottom] cream…

I have a blue &...
I have a blue & white china [Japan sticker on bottom] cream & sugar set that is square, each sits on corner feet. The decoration appears to be applied by transfer -- lid and upper exterior rims of sugar & creamer have continuous garlands of leaves and two 5-petalled flowers. The sides: river scene, man w/staff/pole standing in a boat; left foreground has a couple of folks, a cow w/horns and boxes on the bank; far side of river bank is lined with trees and shrubs; centered background: fortified long castle(?) w/ four lg watchtowers or turrets @ corners, and one smaller one on the left side, two dentated walls, one above the other (bldg. has tiny dashes--windows?). The handles swing up from the pieces about 1/2 "are squared at the tops, curving down to form handle. Came from a Pennsylvania estate. (1930'S-just a guess??) Please can you help me learn more about it? Thank you so much for your time
Show More
Show Less
Ask Your Own Antiques Question
Share this conversation

imgur beyond my capacity--can I possibly forward the email my son just sent to me after snapping photos on his phone?

Yes that's the bar in the top left of your Google screen. Click on the URL to highlight it. Right click and hit "copy" and then paste to here (click on the page, right click then hit 'paste' from the little menu that pops up) where you are typing to me.

Hope this makes sense. (Sounds like a whole lot more steps than it really is)

No rush on the photos, tomorrow is just fine, in fact it suits me better.

Sounds like your son is a busy talented person. Good for him!

Talk to you tomorrow.

Okay! Here I am back again! A little later than I had planned so apologies for that.

Your pretty little creamer and sugar set were made in Japan, possibly as early as the 1930s but more likely in the mid-1950s when those blue "Japan" stickers were also in use.

The exact manufacturer in Japan remains unknown as none of the china is factory marked, but it was imported by a company called "Trimont Ware" in business during the "Occupied Japan" era (1945 - 1953) and during the rest of the 1950s and early 1960s. One often sees foil stickers with "Trimont Ware" on them, and this name is ***** ***** you wish to search for other items in the same pattern.

This white earthenware china is all printed transferware (rather than hand painted) and very much in the style produced in Staffordshire throughout the 19th and early 20th century with fanciful exotic scenes, depicting great palaces and castles and sometimes ruins and invariably embellished with garlands of floral decoration.

Most of what they produced was blue and white, but it was also made in other colors too. Here's a mulberry or purple version of the pattern on a tureen: 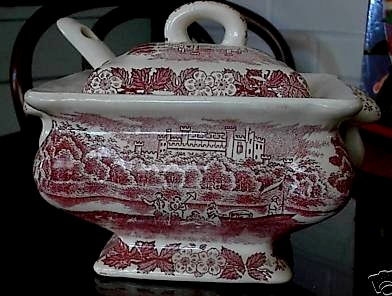 And here's the teapot to go with your creamer and sugar! 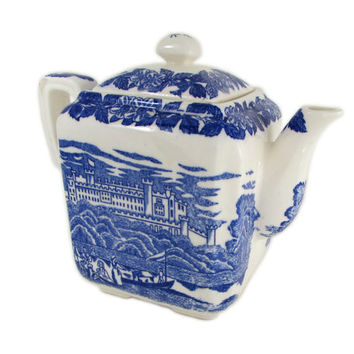 And a covered tureen with matching china spoon 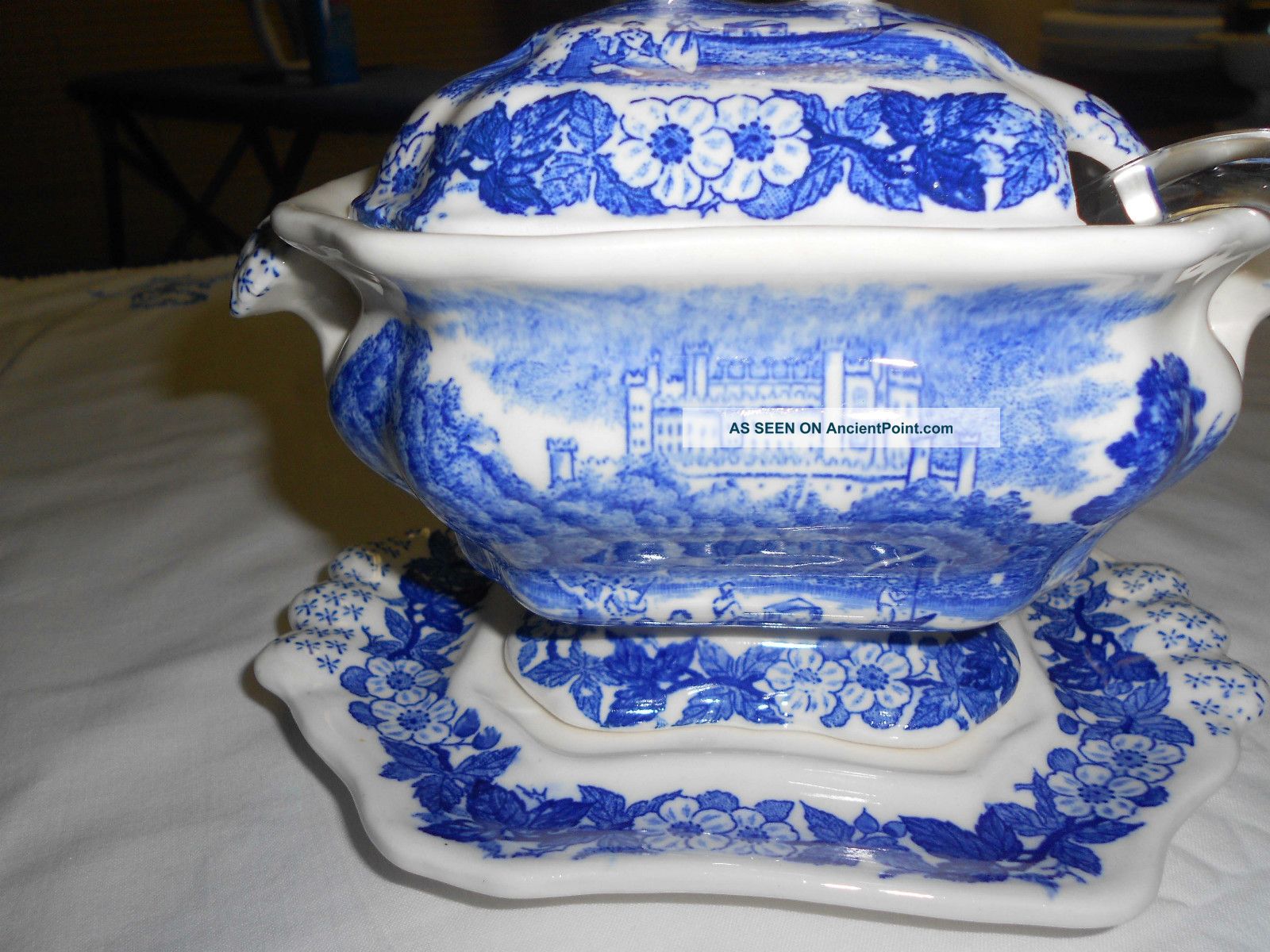 Your set would be classed as 'vintage reproduction' and as such does not have a huge collector following.

If you were to see an identical creamer & sugar set for sale in an antique store it would be priced at about $50 for the pair. This is also the "replacement value" for insurance purposes.

I do hope this helps and thanks for all your help and your son's help in getting the photos to me.

Please let me know if I can be of further assistance with any of this, I would be glad to.

LadyTanya65
Certified Antique Appraiser/ Speaker
2,500 satisfied customers
I have been collecting and selling museum displays from
I have been collecting and selling museum displays from items I've happened across since 1975, while mostly in the service. My shroud of turin was one of 15 made by the sturp team and I sold it along with Items collected in the Middle East as The last week of Jesus to the Holyland Experience in Orlando, Fl. I keep the others for my house in Dallas. Now i'm downsizing and still have most in specially built crates that I keep in Climate controlled environment. I have a a refurbished "Our Lady of Guadalupe" made by the Team allowed to photograph it during the restoration in 1963 in which the Church allowed the Tilman to be viewed with the protective glass removed. In addition I have a full sized "Copper Scroll" scribed inscribed in the various languages that Is mounted on a felt backed display, the only one that I know of from Amman Jordan where the original is located. The Gutenberg Bible is an exact replica of the UT Austin with special Plexiglas's Bobble top. The Bible is a facsimile of one in France that was a copper box type and circa 1959-60, placed in a NYC warehouse until I was able to acquire it in 2012. The final item is a metal set of window type frames in which I placed the most divervse and uninique set of one page examples that show the different materials the uses. The gray backing can be added or removed as the frames contain the Plexiglas documents from Israel and can be put on easels included, sat on a alter or hung. I have them as photos on my face book page. Do you or anyone you know appraise Museum Items such as these? … read more