I have two pieces of moorecroft pottery. One is a round bowl…

I have two pieces of...
I have two pieces of moorecroft pottery. One is a round bowl with lid. Under the lid is a round sticker it says. By Appointment. Under that is a crest signed W Moorcroft..under that. Potter to the late Queen Mary
Also indented on the underside of lid is...Moorcroft. X..also the number 19
Also a vase 19 1/2 cm high signed by William Moorcroft
What value would you put on these pieces...thank you
Show More
Show Less
Ask Your Own Antiques Question
Share this conversation

Thanks for the excellent picture of the vase. What a beauty! Could you very kindly attach photos of the bowl and the marks on both pieces and I'll tell you all about them and give you a value.

Customer reply replied 5 years ago
My upload failed..taking too long. Any other way to send them to you.

Sorry you are having difficulties with uploading the photos.

It may be that your picture size is too large, in which case there's another free public picture hosting site that is just as easy to use and which automatically reduces the picture size for you.

(it will then automatically pull up your picture files).

Select the image you want to send me and click open

Return to the tiny pic page and click Upload Now

and it brings you to a bunch of links.

Click on the one under URL for E-Mail & IM

Click on the link to make it turn black,

Then paste to where you are typing to me.

Thanks! You've so nearly got it.

You just need to click on the writing immediately underneath where it says "URL for E-Mail & IM" and copy and paste it here.

Or simply click on the tiny paper icon next to it and it copies it for you. Then all you have to do is paste.

Customer reply replied 5 years ago
Http://tinypic.com/r/2ykyqrp/8
Hope this gets it right!

Just one image came through, this one:

But for some reason it's only thumbnail size.

Any chance you could make it a little larger?

Tinypic.com offers you a menu of sizes before you upload. I would select a larger format at that point.

Thanks so much we are getting closer!

Of the two links only this one came through, which is all I need 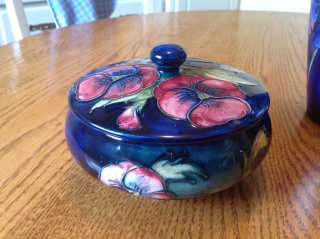 The other link brought me to a deleted image, I'm afraid.

All I need now is a clear photo of the mark on the base of the vase so I can date it.

Sorry to put you to such uploading torture. I do wish there was an easier way.

Customer reply replied 5 years ago
Http://tinypic.com/r/m9rdw5/8
Hope this does it
Thanks

This lidded bowl was marketed by William Moorcroft as a dressing table powder jar, but I have often seen it described as a candy jar, issued first in the 1930s and the pattern is "Pansy" (surprise surprise).

The Moorcroft Royal Warrant paper label "Potters to the late Queen Mary" was used from c1953 to 1978, so this is a post-war example of Moorcroft. Not quite so valuable as the earlier examples but certainly a desirable piece nonetheless.

If you were to see this candy jar for sale in an antique store it would have a full retail price of $900. This is also the replacement value for insurance purposes.

Expect to get in the range of 30% - 40% of this if you were to sell at a good antique auction house or on line on sites such as eBay/Etsy/Amazon, etc. 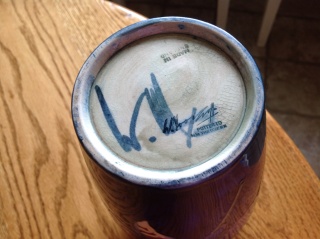 Thanks for the excellent picture of the marks, this dates the vase to the period 1947 - 1953 when Walter Moorcroft used this signature.

This pattern was first produced by William Moorcroft in the 1920s, on a graduated dark ground, officially called "Orchid & Spring Flowers" or simply "Orchid" but sometimes referred to as "Iris & Spring Flowers" which may have been the original name as the 'orchids' do look more like irises, especially the German hybrid irises, with their dramatic ruffled standards and falls. Either way it is one of the most dramatic and pleasing of Moorcroft's patterns and much sought after by collectors.

A vase of this size and date, and in this pattern, would have a replacement/insurance value of $1600.

And thanks so much for all your perseverance and patience with the photos.