Hi, I've a japanese vase I think made during the meiji period.

It's decorated like a Satsuma...
Hi, I've a japanese vase I think made during the meiji period. It's decorated like a Satsuma but porcelain is brilliant white and thin. It "sounds" like an european Dresden or Meissen antique porcelain. It seems more a high quality Kutani than a Satsuma. Marks under the vase are:
• 日本京都 - 島村製 - Shimamura sei - Kyoto Japan
Could be Shingo Shimamura, first active in Kyoto and then in the USA but I'm not shure. Do you know something more? How can I send you pics of this vase?
Show More
Show Less
Ask Your Own Antiques Question
Share this conversation

Hi! This is Robert, thanks for requesting me. I would be happy to help with your beautiful Japanese vase.

First of all, how tall is it?

Here's by far the easiest way to get additional photos to me:

Thanks for your reply. It's a small vase, 9 inches tall, very, very detailed.

Thanks for the dimensions, that helps a lot. It certainly is a beautifully decorated piece.

Will await photos, then give you a full answer and a value.

Thanks so much for the images, that helps a lot.

The artistry on this vase is completely pleasing. Two great scenic paintings, one side a prince shows his princess a pair of cranes, or tsuru, sacred symbols of peace, longevity and marital fidelity in the oriental tradition. Cranes were believed to live for a thousand years and mate for life. The second part of that is certainly true. On the other side of the vase, two arhats (Buddhist holy men) watch the heavenly dragon, ruler of thunder and rain, blow up a storm over the ocean.

Above them around the neck of the vase are detailed brocading and fan shaped reserves filled with tea ceremony objects on one side and scholar's objects on the other.

I would say this is almost certainly connected with the Shingo Shimamura you mentioned who came to the US as an importer/retailer of Japanese porcelain and other decorative goods. Not a lot is known about the Shimamura decorating shop in Kyoto [in fact there are virtually no surviving records for any of the ceramic decorating that was done for the export market]. It specialized in the mass production of export ware for which there was no domestic market in Japan, indeed most Japanese at the time were unaware of the style and extent of what was being manufactured for export. The studio was doubtless like the hundreds of others in Kyoto, little more than a sweat shop employing young paintresses with good eyesight and a steady hand, some of whom would have been no more than eight or nine years old. Here's a wonderful but telling old stereo photo taken in 1904 showing how these shops produced every conceivable type of Japanese ceramic decoration under one roof, from Kutani to Imari to Satsuma to moriage encrusted Nippon ware. 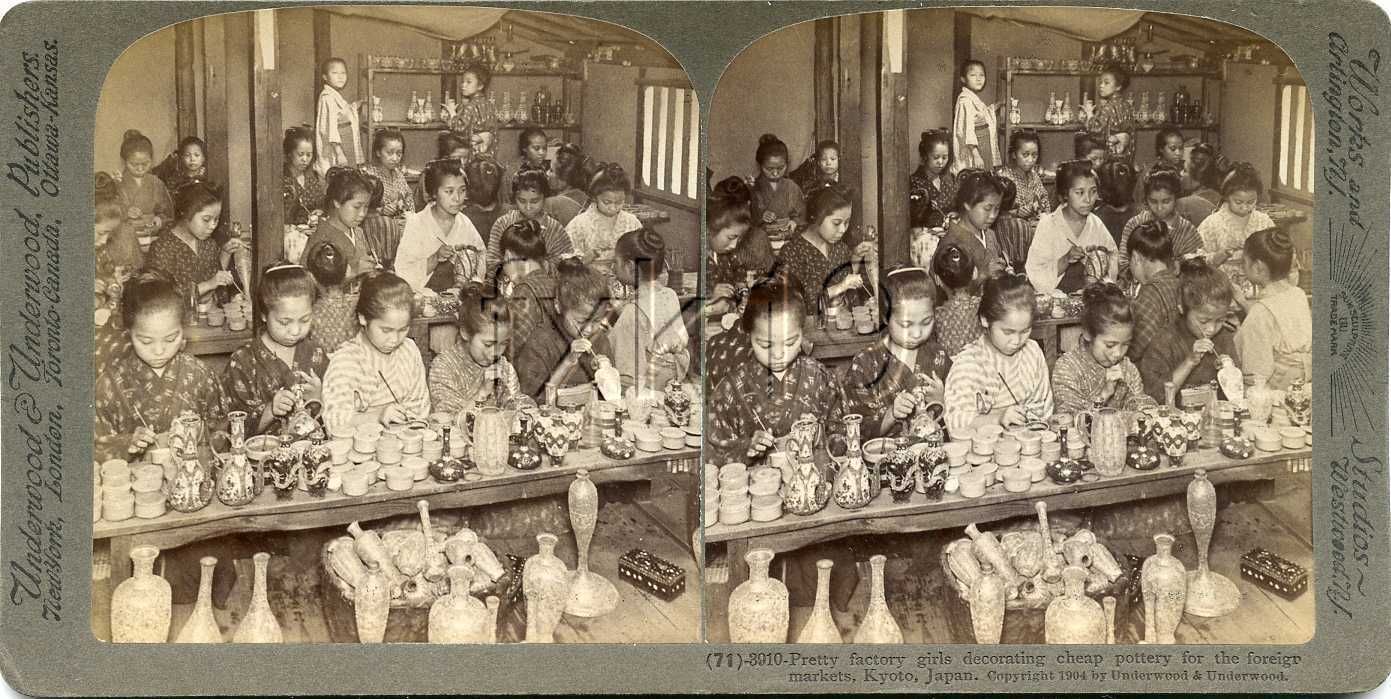 As you probably may know, Shingo Shimamura opened a store selling Japanese imports in Atlantic City, NJ in 1888. He was also an active participant at both the world trade fairs of Chicago in*****Louis in 1904 where he exhibited expertly made porcelain with lavish moriage slip decoration on eggshell porcelain that was particularly well received by the American public.

Looking at the hairstyle and the faces of the figures on your vase (quite a good way to date them as they were subject to the fashions of the day as much as anyone else) I would date this piece to the late Meiji, circa 1880 and no later than 1900.

As regards ***** ***** was obviously by an experienced and talented hand, but not being one of the top Satsuma 'names' it won't be worth big money, but it's a desirable piece nonetheless, and certainly a whole lot better than what was turned out in later years by those little paintress fingers. It would sell at a good antique auction house or on line in the range of $400 - $600. It therefore has a 'replacement' value of $1200 and is what you should insure it for.

Please let me know if you would like me to expand or explain further, I would be glad to.

Verified
Robert S. and 87 other Antiques Specialists are ready to help you
Ask your own question now
Customer reply replied 6 years ago

Thank you very much! I've really appreciated your detailed answer.

Thank you, Luciano, it was my pleasure. And thank you for the very kind bonus, much appreciated.

Hi, I'm an italian Satsuma collector and I'm really in trouble with some vases I bought. I've problems about some marks or in dating porcelains.

Please, suggest me the better way to submit you the questions about each vase. Thank you and so sorry for my bad english.

I would be happy to help you with your Satsuma.

The easiest way is to submit a new question and be sure to put my name, Robert S. in the subject line and it will be sure to get to me.

Also you can select my name from a list of Antiques Experts and it will come directly to me.

Hope this helps, and I look forward to seeing what you have.

Best wishes from Tennessee, USA and your English is just fine, by the way. No it's excellent!

Nora
Expert in Fine and Decorative Arts: Renaissance through Contemporary
Post-Graduate from Christies London
26,584 satisfied customers
Show more
Disclaimer: Information in questions answers, and Show More
Disclaimer: Information in questions, answers, and other posts on this site ("Posts") comes from individual users, not JustAnswer; JustAnswer is not responsible for Posts. Posts are for general information, are not intended to substitute for informed professional advice (medical, legal, veterinary, financial, etc.), or to establish a professional-client relationship. The site and services are provided "as is" with no warranty or representations by JustAnswer regarding the qualifications of Experts. To see what credentials have been verified by a third-party service, please click on the "Verified" symbol in some Experts' profiles. JustAnswer is not intended or designed for EMERGENCY questions which should be directed immediately by telephone or in-person to qualified professionals.