Chinese snuff bottle. How are you Robert ? I have a Chinese…

Answered in 12 hours by:
Antique Expert: Angela--Mod,  replied 7 years ago

Hello, I am a moderator for this topic. I sent your requested Expert a message to follow up with you here, when he is back online. If I can help further, please let me know, otherwise, no need to reply. Thank you for your patience.

Verified
Hi Addisu!
Doing great, thanks for asking. Hope you are enjoying some spring weather, we are about to have a record freeze tonight here in south Tennessee. I've had to bring practically my whole yard inside!

Just letting you know I got this Q too. Thanks so much.
Will have an answer for you as soon as I can.
Best wishes,
Robert
Customer reply replied 7 years ago
Thanks Robert for the response here in California start warming up I have not thought Tennessee get that cold I have brother and sisters in Minnesota I been there few times before summer and it was so nice and evergreen I believe where u live is the same too hope you guys get warm.

You have much nicer weather there in California than we have. I have family in Minneapolis, too, but I'm glad I don't have to live there during their winter! They have four seasons in MN: nearly winter, winter, still winter, and construction work.

This is a very pretty famille rose enamel on copper/brass "European subject" snuff bottle but I am almost certain it is not of the period. I would say it dates to the second quarter of the 20th century.

There are many little details the copiers never seem to get quite right, and one is the spoon. The originals usually had an ivory spoon and looked like this: 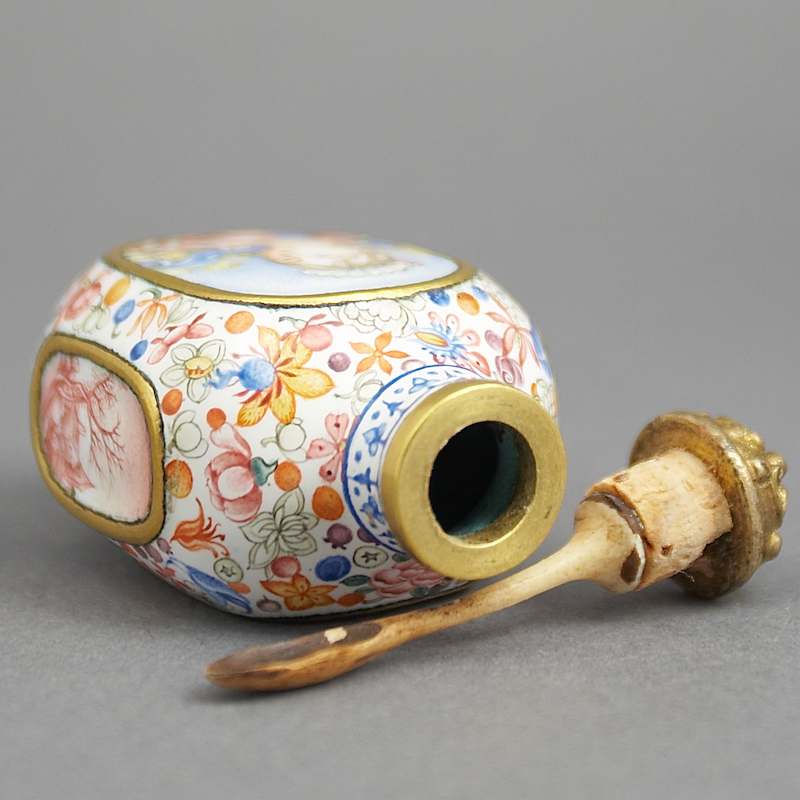 Not metal like yours. There are other differences too, particularly in the way the seal mark is written. It's a little too blue and thickly scripted. The originals were paler and finer.

The base on yours has an apocryphal Qianlong seal mark and the characters (reading top to bottom, left to right, starting top right) read:

As you may know, the Qianlong was 1736 -1795 and was a time when the Imperial Palace Workshops in Beijing produced these for export. In fact this type of decoration is often known as "Peking enamel" (after the old name for Beijing) and to distinguish it from cloisonne which is slightly differently fabricated.

So you did quite well!

Thanks Robert you are always helpful but I paid a lot of money here is the picture I will go get my money back tomorrow they have described it wrong the owner of the antique store want signed and apprised latter I am not sure if you can help with this they have to proof it is from 1711-1799 I found one sold last month for 300 on I M Chait I was doing the web search I think this snuff bottle is not even old it may be fake replica that start just hitting the market on the other hand the snuff bottle is well made this is just my opinion. Thanks again

It is certainly a good copy, but definitely 20th century.

The spoon is wrong, the mark is too blue and thickly scripted, the manganese panels on the side are the wrong color and not finely enough drawn and the copper/brass foot ring is too thick and protrudes too much. The painting in the panels is good quality, but the grey speckled shading in the sky is wrong (the Imperial Palace decorators never did that) and the bosom line is a 20th century fantasy.

I am sorry to bring you this news, but a reputable store will ALWAYS take returns from a customer if they are not satisfied. The customer is always right.

Thanks a lot for great response I will get back to you with more questions I think this is my biggest lesson for 2014.

Antique Expert: Robert S., Antiques and Collectibles Researcher replied 7 years ago
Thanks, Addisu, very glad to have helped, I just wish it was better news. I know how much these lessons hurt!
Best wishes,
Robert
Was this answer helpful?
Yes
No

100% satisfaction guaranteeGet all the answers you need
Share this conversation
Related Antiques Questions
For s only Let's revisit china....i have several small
for robert s only Good morning. Let's revisit china....i have several small items... will ask them separately. Item #1. Snuff bottle with cats. By the look & feel - it's not fake. But you'll let me kn… read more