Hi , Thanks for doing this ! I am origionally from Holland…

I am origionally from Holland where my late Mother acquired two Chinese or Japanese wall plates from an estate sale, what is unusual about these plates is that they are decorated on the back as well, does that mean anything ? Maria
PS. No marks at all on the back.
Show More
Show Less
Ask Your Own Antiques Question
Share this conversation

My name is XXXXX XXXXX I would be happy to help with your plates.

Could you very kindly give me the dimensions.

Also, your attachment link doesn't work, can you try again.

And then copy the link they give you. It will look similar to this http://www.imgur.com/xxxxxxx and it's located right under where it says Link (email & IM) and paste it here where you are typing to me.

(If you have uploaded multiple photos on one Imgur.com link, copy the URL in the browser bar at the top of your screen, otherwise I get just one photo)

Hi Maria,
Thanks for the photos, I have just had these two passed on to me. 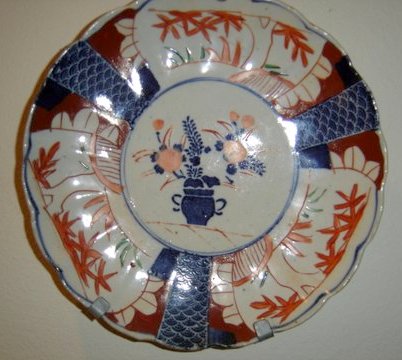 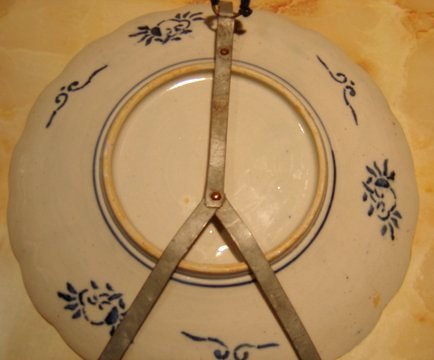 Is the other plate identical to this one? If not, can you send a picture of it too.

Also, can you very kindly tell me how big they are?

Hi Robert, They are 8 inches across. They are the same but not identical, some variation in the thickness of the (hand) painting and the flower on the right sight of the blue pot in the medallion, is placed a bit higher and you can see little variations between the two plates here and there.

ROBERT WE ARE HAVING A LOT OF TROUBLE UPLOADING THE NEXT 2 PICTURES, I CAN ONLY EMAIL THEM TO YOU, SO CAN YOU PLEASE GIVE ME YOUR EMAIL ADDRESS?

I am sorry, Maria

Okay, thanks for the extra information, that's most helpful.

No need to send photos of the second two, (unless you wish to) if they are almost the same.

They are a pair, and the fact that there are slight variations is a good sign, and it bears out what I initially thought, that these are entirely done by hand rather than painted onto a printed outline (as was a feature of newer ones). Some of the design looks like it was hand stenciled, a common practice at the time.

These plates are Japanese rather than Chinese, though it is often hard to tell, I agree, especially as the Japanese copied from the Chinese and then vice versa in the twentieth century.

They are an example of what's called Imari export porcelain, almost always with blue and red as the dominant colors, the blue applied under the glaze, the rest of the colors over the glaze (usually but not always).

The pattern is typical of the day, they date to the late Meiji period, circa 1880 - 1900, with three-segment radial symmetry around a central floral medallion, in this case a vase filled with flowers.

The design on the underside, and Imari ware was often embellished in this way, includes the auspicious fungus called linghzi in Chinese, or reishi as the Japanese call it. It has great supernatural significance in the Asian tradition and believed to bring longevity and health.

Value wise, Japanese export Imari is not as popular with collectors as it once was, unfortunately, and prices reflect this. This might change, but currently, if you were to see your plates in an antique store they would have a retail price of about $280 for the pair.

This is also the replacement value for insurance purposes.

Expect to get about 40% of this if you were to sell at auction or on line.

I do hope this helps! Please let me know if you would like me to explain or expand on any of the above, I would be glad to.

Thanks Robert, Yes I rated your service as excellent and I need no more info.

I was an Antique dealer myself ,but dealt mostly in primitives, especially Texas primitives, I thought that my plates were Japanese, but wasn't sure. Thank you very much, Maria

Antique Expert: Robert S., Antiques and Collectibles Researcher replied 7 years ago
Hi Maria,
Thanks so much for the kind rating.
Nice to hear you were in the antique trade yourself. I have a few primitives in my collection, but mostly Inuit rock sculptures. The other end of the spectrum from Texas, I guess.
Best wishes,
Robert

PS Please ignore the automatically generated messages to respond to this! R
Was this answer helpful?
Yes
No