I have a copper footed...
I have a copper footed bowl with silver inlay that has stamp of A DOUGLAS NASH CORP in the base. I am looking to see if there are other pieces he did in this medium and where I might take it to be authenticated? I purchased in London years ago, and now live in Arizona. Thank you.
Show More
Show Less
Ask Your Own Antiques Question
Share this conversation

Hi! My name is XXXXX XXXXX I would be happy to help with your Douglas Nash footed bowl.

Most of the output of this interesting but short-lived company was art glass. Pieces in other materials are rare.

Could you very kindly attach a photo of it.

Also, what size is it?

Here's a REALLY simple way to attach additional images (three clicks and a copy and paste and you are done).

And then copy the link they give you. It will look similar to this http://www.imgur.com/xxxx and it's located right under where it says Link (email & IM) and paste it here where you are typing to me.

(If you have uploaded multiple photos on one Imgur.com link, copy the URL in the browser bar at the top of your screen, otherwise I get just one photo)

Thank you for your response & easy directions to upload pics!

There are several smudges from handling it, but I am hesitant to clean.

It has been in my breakfront for several years!

I photographed it from several angles so there are 2 links.

Thanks so much for the excellent photos, I can now see exactly what you have.

What a beautiful bowl!

This elaborate silver fretwork pattern is typical of the American Arts & Crafts patterns and mixed metals of the day, the late 1920s -very Great Gatsby!

A. Douglas Nash Corporation was a short lived company that emerged as a result of Louis Comfort Tiffany discontinuing business in 1927. It was formed by Douglas Nash with help from his father Arthur J Nash, the Englishman superintendent of Tiffany Glass Works, as well as other associates. Unfortunately the company began operations right at the point of the Wall Street crash, so it did not fair well and was wound up in 1931.

This piece was almost certainly created by Leslie Hayden Nash (1886 - 1958), also a son of Arthur's, who was responsible for designing and making the bronze and copper mounts for much of the art glass pieces. He was also the chemist who invented the process for Tiffany's famous Favrile glass, and the green copper oxide that is such a feature of his lamps, though he never got any credit for either from Louis Tiffany for it. Leslie worked for the A Douglas Nash Corp and then formed his own company in the 1930s called L.H Nash Metal Arts, and used a greyhound logo on his works, mostly small Arts & Crafts items in copper with glass enameling.

As regards XXXXX XXXXX more of this pattern, I think you are going to have a hard time.

This is very rare stuff. You could have the only example left on the planet!

I can find almost no examples in the sales records of A.Douglas Nash Corp copper ware of any kind, let alone silver inlay work like this.

The only example that comes close is this A. Douglas Nash Corp marked box made by Leslie Nash 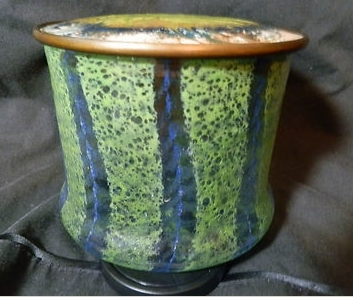 Given this information and its association with Tiffany your bowl would have an auction or on-line value in the range of $500 - $800.

It therefore has a replacement value of $1600 and is what you should insure it for.

Thank you for your help.

Is there an auction house you would recommend when I am ready to part with the piece??

Sure! If you are in Arizona, you are a little ways away from the right venue, but I highly recommend either of these two in Los Angeles:

Best of luck with it,

Thank you, XXXXX XXXXX your help!

You are most welcome. Thanks so much for asking me about it.