I have what I believe is a sack back Windsor chair. The thing…

I have what I believe...
I have what I believe is a sack back Windsor chair. The thing I have never seen before are support rods on the chair. I have pictures to send. I would like to know if it is truly a Windsor and a date made as well as a value.
Show More
Show Less
Ask Your Own Antiques Question
Share this conversation

Hi! This is Robert here (The Bishop King) thanks for asking me to appraise this nice chair for you, I would be happy to do so.

Could you very kindly attach the pictures you mention.

If you could include close-ups of the following, that would be great, and I can tell you all about it, how old it is and give you a value:

(2) The underside of the seat where the legs join.

Here's a REALLY simple way to attach additional images (three clicks and a copy and paste and you are done).

And then copy the link they give you (it will look similar to this http://www.imgur.com/xxxx) located just under where it says Link (email & IM) and copy & paste it here where you are typing to me.

Thanks for the photos, unfortunately only one came through on that link: 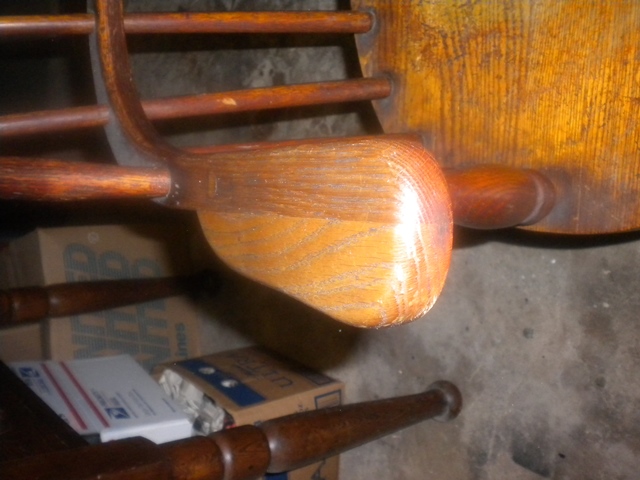 You may have to send them link by link, though there is a way of bundling the photos all on one link but I have never been able to figure out how to do it on Imgur.

Thanks so much for all the photos. Sorry to put you to all that trouble but I just wanted to be sure I wasn't missing anything and hopefully I'll be able to help walk you through the process of looking at a Windsor chair for various clues to age and origin. It's amazing how much one can tell without a label.

This is a nice example of an American made sack back Windsor chair, dating to circa 1920s. The seat looks like it could be chestnut wood, which would be appropriate for the time. It has the right color and grain. That, and the "bamboo node" detail on the lathe turned stretchers, are both indications of American manufacture, rather than English where the Windsor chair originated.

The bracing rods are certainly unusual and make this chair very interesting. They may be original to the chair, but I don't know of any manufacturer who did this, simply because if the joinery and construction are done properly in the first place, the legs and stretcher of a Windsor chair are surprisingly robust and will last for two centuries on just wood alone. So this may have been done as a very elaborate and well-conceived reinforcement at a later date.

Arriving at a date is fairly easy once you know a little about the evolution of their design and materials and not least from looking at hundreds and hundreds of them.

Starting with the seat. The really old ones, usually pre-1840, have the grain running front to back rather than side to side as in yours. They also have lots of old indentations in the front of the seat from hobnails. These were kitchen chairs and inevitably suffered from all sorts of abuse in their original setting including the age old practice of tying ones boots on them. Old hobnail marks are usually a great sign of 19th century chairs or older.

Although chestnut and oak are found in older chair seats, these were usually elm or pine wood. Not always, but mostly. But the old ones were made from a single plank. Yours is made up of a number of planks neatly butt joined and then shaped to look like a single plank.

The same has been done in the two plank arm rest. 19th century, or older, Windsor chairs had armrests of a single piece of wood, even if they were flared like this, which generally they were not.

The bottom of the leg (thanks for that great shot, by the way) tells a huge amount about a chair. Old ones are usually much more pitted and damaged than that, although yours does show quite a bit of 'broom knock' indicating the eighty or more years of its life.

There are other little clues, but that will give you the general idea. The chair has a lovely color and finish but it's not going to be especially valuable. If you saw it for sale in an antique store it would have retail price of about $200. This is also the replacement value for insurance purposes. Expect to get approximately 40% of this if you were to sell it at your local antique auction house.

Thank you for the lesson in how to date a chair, it will be very helpful in the future. This chair was handed down to us by a relative so it didn't cost me anything. The support rods do look like they were done at the making of the chair just because of the way the holes are covered with the exact same wood and same stain and grain is even. I am not sure why they were put in but maybe the chair was a special order for a very heavy person. Thanks again and if I find any other antiques I need looked at I will send them in on here.

Yes, those rods were certainly put in expertly and I noticed how carefully the drilled holes had been covered up. In fact it's impossible to detect the dowel covers in your photos. It could well have been a special order for a heavy individual, I like that suggestion. All these unanswerable speculations, to me anyway, only add to the enormous fun of collecting antiques.

Best of luck for now, and hopefully see you again in the near future with another question or two. And thanks so much for this one.