I have 2 Chinese horseshoe armchairs. They have 2 carvings… 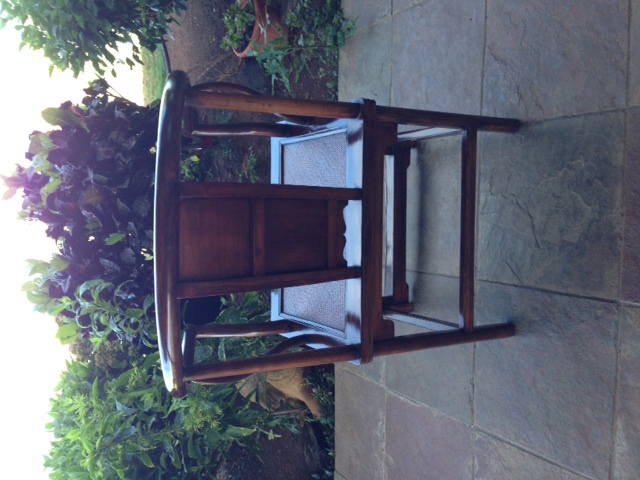 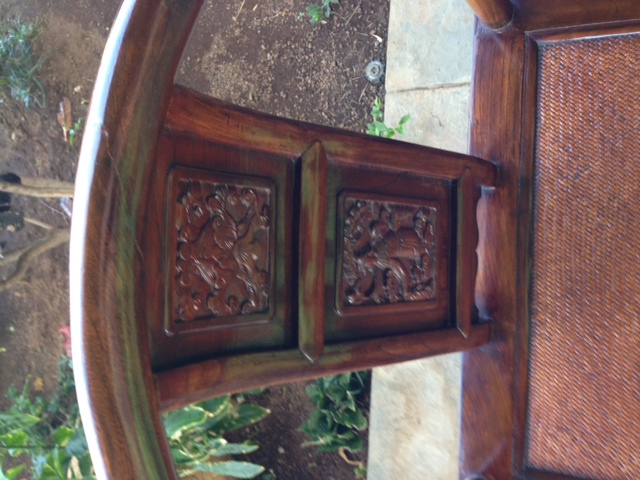 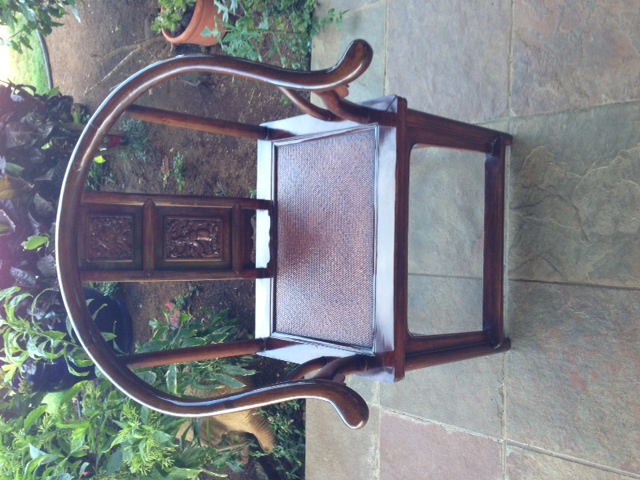 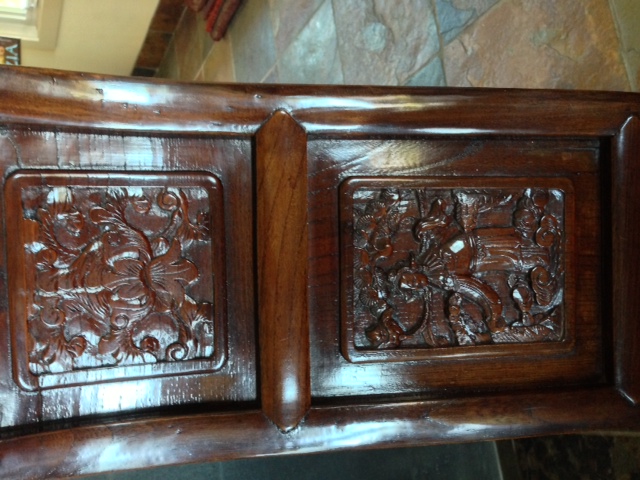 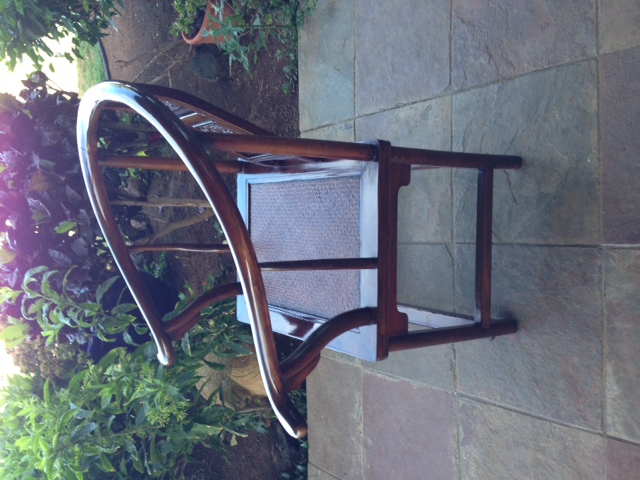 I have 2 Chinese horseshoe armchairs that I believe are 19c Huanghuali, from the Qianyi Qing Dynasty.   They have 2 carvings on the splat, and the seats are cane. The height is 36"and the width is 22.5". Seat height is 14". There are no other markings on the chairs. I would like to know if they are reproductions or authentic antiques, the type of wood, and an approximate value. I can attach more photos.  Thank you.

Hi! My name is XXXXX XXXXX I would be happy to help with your beautiful chairs.

Thanks for the excellent suite of photos, that's a great help. They certainly look like the real thing.

You should also see knocks and scuffing around the feet of a chair this age. If they are very neat and unblemished looking, it's a bit of a red flag.

Many thanks, XXXXX XXXXX to hear, 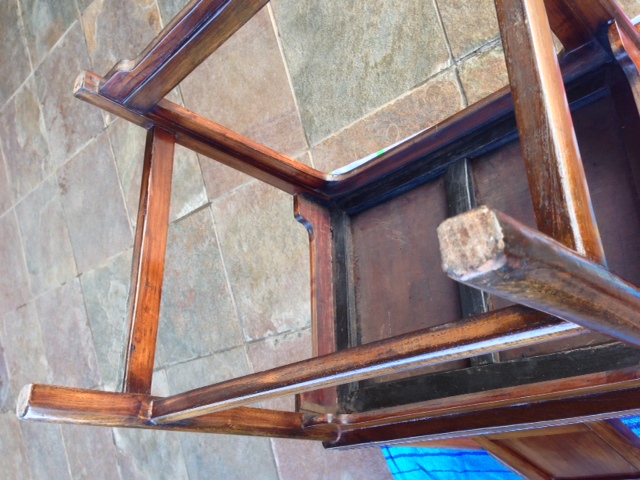 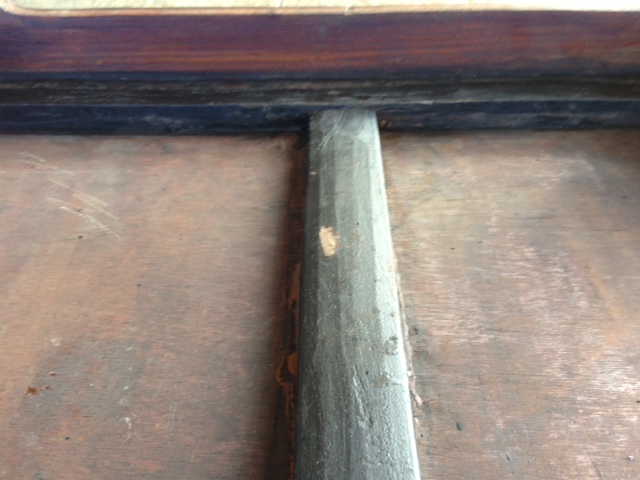 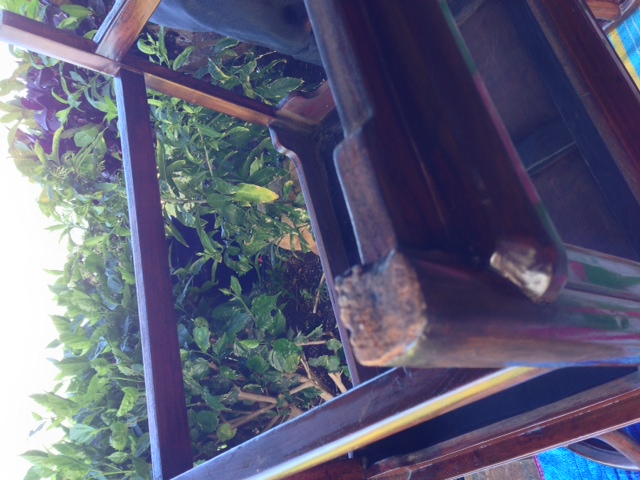 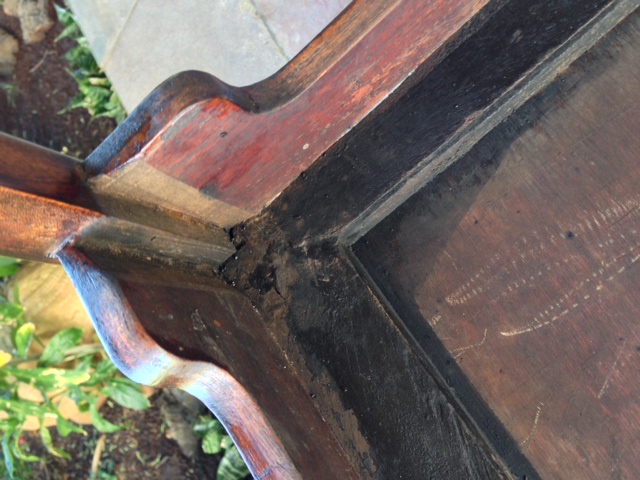 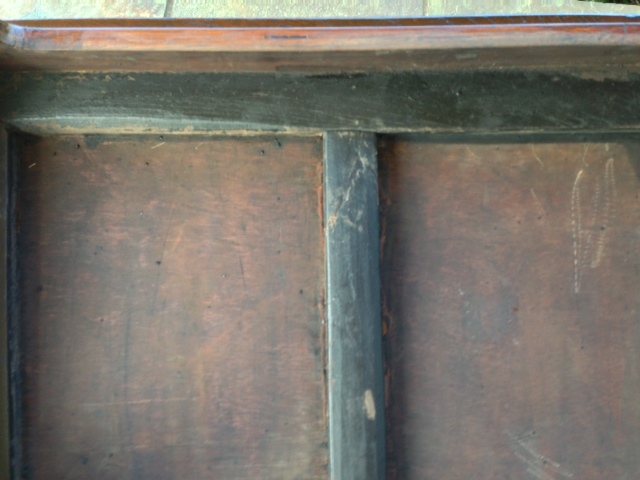 Here are the pic's you asked for. Not much scuffing on or around the legs. Can you tell the wood type? Value? Age?

Thanks for the incredibly helpful photographs, that is just what I needed.

These chairs look like the real thing, probably late Qing to early Chinese Republic, circa 1810 - 1920.

The seat rails are chamfered into the tops of the legs the way they should be and I like that the cross member under the seat has adz marks. Always a good sign.

That the top member of the continuous bracket on the front is straight and does not have a humpback profile, means these chairs are not any older than that. The 17th & 18th century examples, from which these are derived, the top member of the bracket has an ogee or other simple curve or bow. And the cross section is always humpbacked. 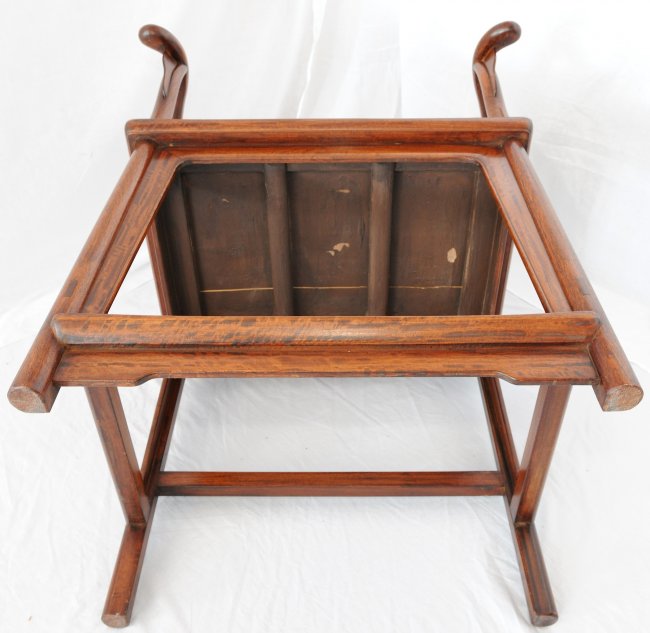 On the negative side, it's a shame they have been re-finished, which will detract from value a bit. And that's why you don't see much sign of scuffing, it's been varnished over, however it does show on the very bottom of one of the feet. That piece of wood looks like it has been pressing into tiny bits of grit and other floor debris for many many years and is what you would expect to see in a chair of this age.

The carving is lovely, especially the lower panel with the depiction of Guanyin, goddess of mercy and compassion on the ocean waves and (unusually) simultaneously under a pine tree. There's no accounting for the whim of the artist, I guess.

So as to value, I think these chairs are very good and could sell at auction for a thousand dollars apiece, maybe more. It is so hard to put a price on Chinese furniture at the moment because values are all over the place and so much depends on your connections in the antique furniture world and where you are located.

If you have access to IM Chait, Bonhams, Christie's etc (with huge international mailing lists of potential bidders who would know what these are) then they would probably be listed in their catalog in the range of $3000 - $5000 for the pair.

If you were selling them through your local antiques auction rooms, I would expect only a quarter of that.

Sorry to be so inconclusive, but I hope I have given you at least part of an answer.

They are lovely chairs, thanks for asking me about them.

Thanks for the information. You have been very helpful. One thing that you neglected to mention, was the type of wood. Can you tell from the photo's?

Also, what are adz markings? What should I be seeing that I am not?

The adz marks, perhaps spoke-shave marks is a better description, 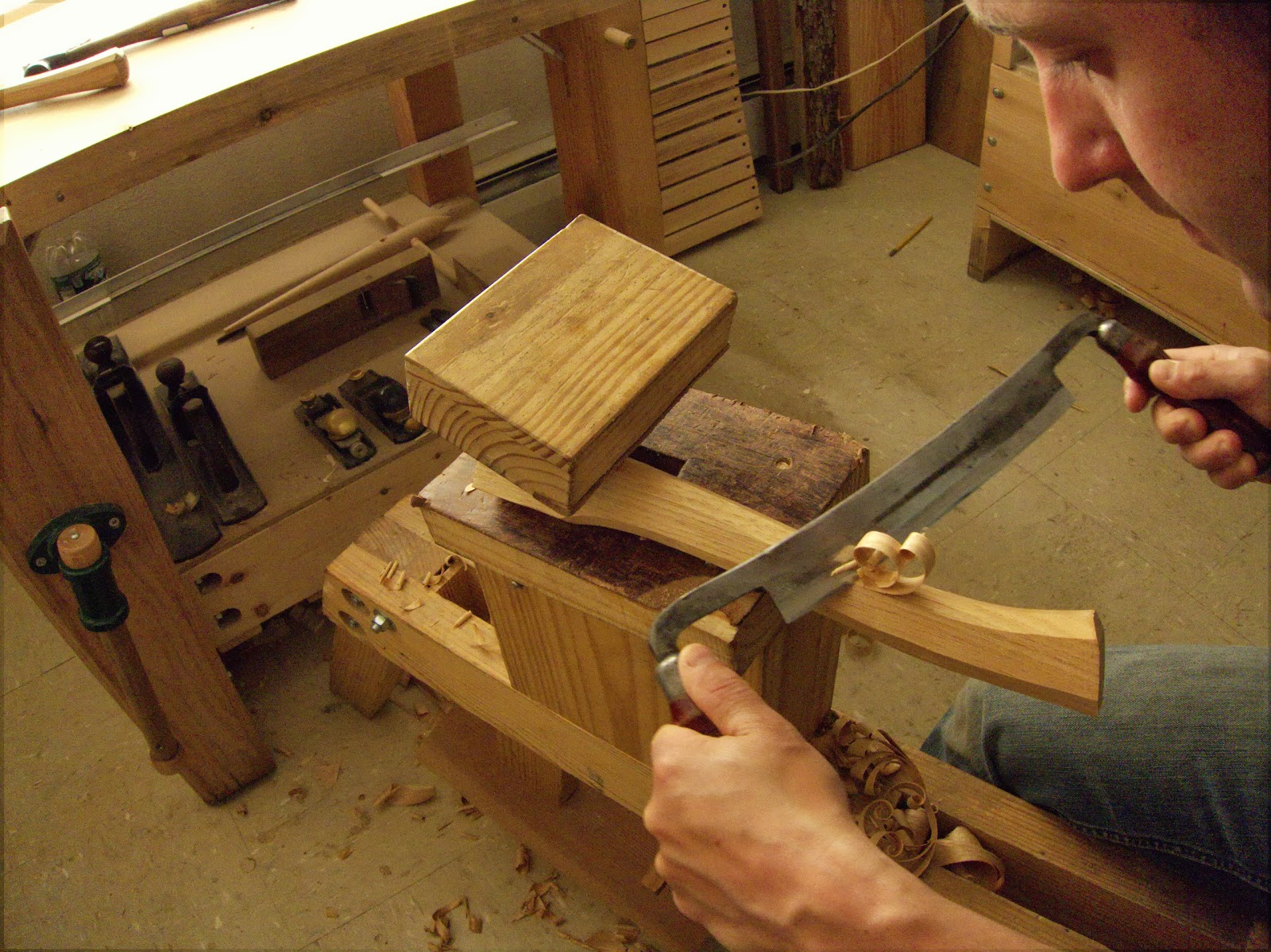 are the marks on a hand shaped piece of wood as opposed to one machine milled. It usually signifies age. The cross member under the seat still has the marks of a spoke-shave on it.

Determining the type of wood from photos is notoriously tricky. It's very easy to get distracted by the color.

The grain in yours is not quite right for huali, either huanghuali or the more recent xinhuali.

I think they are probably Chinese elmwood. 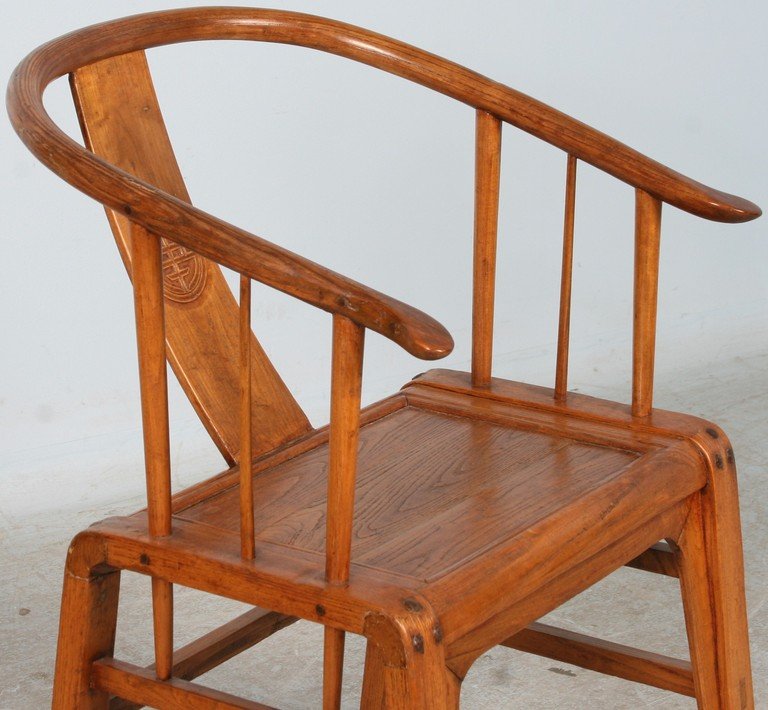 This chair is elmwood. Unstained, so a lot paler than yours, of course. Notice the wide pronounced grain.

Elmwood is considered one of the best hardwoods in Chinese furniture, but not quite as prized as huanghuali or zitan.

Many thanks...you have been very gracious with your answers. I almost sold these chairs on craigslist for $700(the pair). I got suspicious when the guy said he owned a store, and would gladly pay the shipping from The Big Island to Honolulu. He called me many times chomping at the bit for my beautiful chairs. I finally told him I decided to get an appraisal, and I would call him back. He even asked me for a better price, saying the wood wasn't good on these chairs!!! Ihave decided to keep my chairs thanks to you and your most helpful and interesting information. Mahalo!

Thanks so much! Glad to have been a help!

Especially in preventing you from letting them go for $700 !

Appraiser Alan AOA C
Certified & Licensed Adjuster/ Appraiser
All Organizational & Government Required Courses
9,398 satisfied customers
I have what has been called a chair/table. With the top in