I have a sterling silver samovar dated 1866. It has a sphinx…

I have a sterling silver...
I have a sterling silver samovar dated 1866. It has a sphinx on the top and a rearing lion on the back. On the from it has R.W.P. for XXXXX XXXXX Pickering from her father H.W.P XXXXX XXXXX Pickering. on the bottom of the samovar is 1866 Bigalow Bros. and Kennard Boston MASS. I have bee trying to find if there were any others made since samovars are mainly from Russia and the Middle East.
Show More
Show Less
Ask Your Own Antiques Question
Share this conversation

Hi! My name is XXXXX XXXXX I would be happy to help with your magnificent samovar.

Thanks for all the detailed information and the great photo, I can see exactly what you have and it's good! This is by one of the top makers at the very beginning of the remarkable era of splendor in American silvermaking.

If you would also like me to put a value on it as well as tell you all about it, could you very kindly give me the weight in ounces or grams (an ordinary kitchen or bathroom scale would be close enough)

Customer reply replied 7 years ago
Yes, is this a one of a kind or had others been made.? What is the symbolism of the sphinx and the rearing lion? Does it have anything to do with the Masons? It is sterling silver and weights five pounds. At the top of the sphinx' s headdress to the bottom it is 15inches. From tha handles it is 11 inches wide. Thank you for your response but you really did not tell me anything of the provenance or what I already know about the piece. The family are descendants of the third Secretary of the United States, Timothy Pickering. Is their a society or museum on Bigalow Bros and Kennard that I could write to? I would be interested in the value based on the Provence of the samovar. Was the samovar a common item in the 1800's for America since most samovars came from Russia and the Middle East?
Thank you,
Betsy Walker

Thanks for all the extra information, that helps a lot. And please don't think I have given you an answer yet, I haven't. I apologize I should have stated more clearly that I was waiting for more information and then I would give you a full answer.

So let me do some more research on the provenance (although you may have all that is already known) and I will tell you who made it and give you a value. I will also tell you about all the symbols and the connection between America and the samovar.

Back as soon as I can.

So first let's start with the maker.

The name on the base, Bigelow Bros & Kennard, were a high end jewelry store in Boston. Martin Parry Kennard, who was the principal of the business, was a prominent wealthy Bostonian and the store was taken over by his son Edward Kennard in 1876. Kennard senior was a keen supporter of local artisanal talent and employed a man by the name of Lewis Jenks to work for him and encouraged him to make the finest silver he was capable of to sell through his store.

It was Lewis Jenks who made your samovar.

His extraordinary talents were only just emerging at the time he made your piece, but they were sufficiently noteworthy as to attract the custom of all the good and the great of Boston, which was of course exactly what Martin Parry Kennard intended. No doubt this is how the piece came into the possession of the Pickering family.

Lewis Jenks left Bigelow Bros & Kennard in 1872 to make silver on his own and later with the patronage of Kennard junior in 1876 began creating some of the finest silver ever made in America. He drew the attention of the giant of the silver world, Gorham, who bought the firm out in 1880 and moved everything to their manufacturing plant in Providence RI, including Jenks himself.

This extraordinary silver napkin on a tray was made by Lewis Jenks for Gorham, circa 1878-1880. It was inspired by Russian silver making of the time that specialized in the verisimilitude of natural objects like cloth and straw. 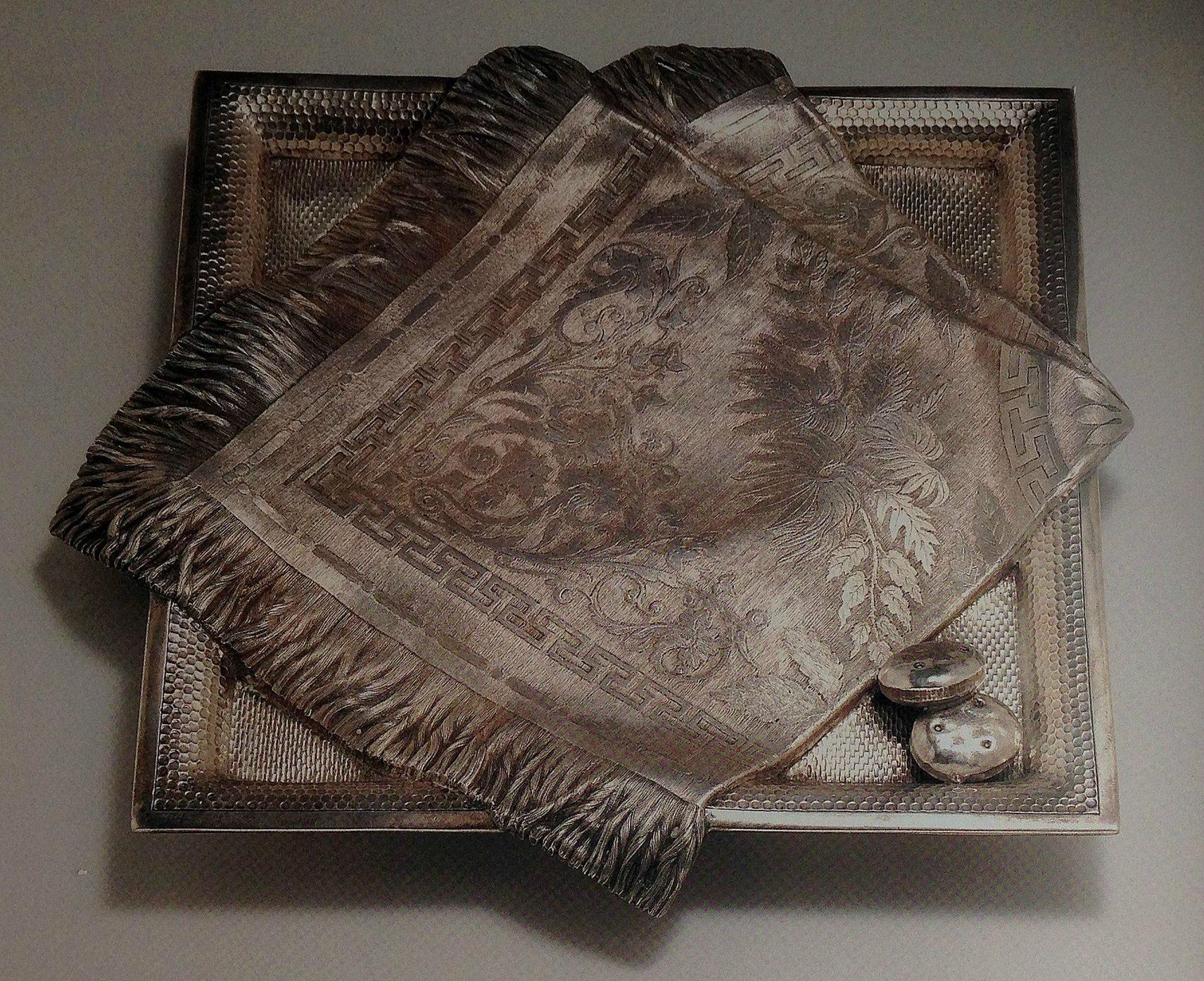 Jenks obviously had a particular liking for Russian design and ornament. In this samovar we see not only Russian influences, the samovar form itself, and the Ottoman-esque motifs such as the arcade border and lambrequins under the rim, but also the Egyptian influence of the Sphinx finial.

Also, during the 1860s, there was a minor fashion for including the samovar as part of the 'tea tackle' in all the best drawing rooms. It was simply used as a hot water urn for making the tea in a (usually matching) silver teapot, rather than for brewing Turkish or Russian coffee, hence the little receptacle for the burner to be placed underneath.

Here's a Tiffany example from the 1860s

As far as I can tell, there are no Masonic symbols on your piece.
However, the lion engraved on the side, actually a "demi-lion rampant" in heraldry-speak, is the device in the center of the shield of the Salem/Boston Pickering's coat-of-arms.

Henry Pickering adopted it and had it printed as his bookplate and had a signet ring engraved with it.

Here's a fascinating account of the Pickering genealogy and history -including information on XXXXX XXXXX Pickering- for you to continue your researches.

So what about value? Silver of this date would be "coin" silver (900/1000 purity and therefore, technically, a little less than sterling at 925) but with a piece of this weight, age, artistic merit, historic significance, provenance, etc., no-one would quibble about the difference.

Also, this is a rarity. I can find no record of another samovar by Lewis Jenks, or with Bigelow Bros & Kennard marks. There were obviously extremely few of them made. You may indeed have the only one.

If this piece were to come up for auction at one of the best auction houses such as Christie's, Bonhams, Skinners, etc it would sell in the range of $4000 - $6000.

It therefore has a full retail or 'replacement' value of $12,000 and is what you should insure it for.

Many thanks for asking me about this amazing treasure, it was a pleasure to see it.

Verified
Robert S. and 87 other Antiques Specialists are ready to help you
Ask your own question now
Customer reply replied 7 years ago
Robert you are amazing!!!!!
Thank you so much for the detailed information about the samovar, it has been very helpful not only with knowing the maker but information on my husband' s great great grandfather. Admiral John Grimes Walker, who was married to XXXXX XXXXX Pickering, also my husbands great grandfather lead the great white fleet around the world. I have several heirlooms that I will be checking information about and I hope I get the privilege to have your service again. Right now I have two family items that Christie's of New York is checking for me. Thank you again for your talented research skills.
Betsy

Antique Expert: Robert S., Antiques and Collectibles Researcher replied 7 years ago
You are very welcome, Betsy, it's a remarkable piece. And what a lot of fascinating history you have in your family.
I would be delighted to look at anything else you may have.
You can either add it here as a follow up question or start a new one. If so just put my name Robert, or The Bishop King in the subject line and I'll be sure to get it.
And many thanks for the rating and kind bonus. Much appreciated!
Have a wonderful day and talk to you soon I hope.
Robert
Was this answer helpful?
Yes
No

Judith-on-Antiques
Antiques and Collectibles Researcher
Bachelor's Degree/Graduate Chef's Diploma
6,624 satisfied customers
Show more
Disclaimer: Information in questions answers, and Show More
Disclaimer: Information in questions, answers, and other posts on this site ("Posts") comes from individual users, not JustAnswer; JustAnswer is not responsible for Posts. Posts are for general information, are not intended to substitute for informed professional advice (medical, legal, veterinary, financial, etc.), or to establish a professional-client relationship. The site and services are provided "as is" with no warranty or representations by JustAnswer regarding the qualifications of Experts. To see what credentials have been verified by a third-party service, please click on the "Verified" symbol in some Experts' profiles. JustAnswer is not intended or designed for EMERGENCY questions which should be directed immediately by telephone or in-person to qualified professionals.