We have a Chinese porcelain vase with the 5 claw imperial dragon.

Hi! My name is XXXXX XXXXX I would be happy to help with your dragon vase.

Could you very kindly attach the photos you mentioned.

Also how big is the vase?

Here's a REALLY simple way to get attach pictures, if they are already in your computer, (three clicks and a copy and paste and you are done).

And then copy the link they give you (it will look similar to this http://www.imgur.com/example ) and paste it here where you are typing to me.

Many thanks, XXXXX XXXXX to hear
Robert

Just wanted to let you know I got your great photos. Thank you.

What a wonderful vase this is!

I'll have a full answer and value for you shortly,

This is a most interesting vase and quite rare.

The decoration is an interesting mixture of traditional Chinese methods and forms with lots auspicious symbolism as well as one or two things one does not see that often and are extremely desirable.

The colored enamel decoration is fencai or famille rose. That is, thickish applications of opaque enamels built up within distinct dark outlines so that the effect resembles cloisonné enamel. The flying dragons are magnificent, amid the usual ruyi head clouds and so too is the blue ground which is a highly unusual and decorative pattern incised into the clay.

This is known as sgraffito ground famille rose one of the rarest and most desirable decorations on Chinese porcelain. Its manufacture in an incredibly laborious process typically needing at least eight separate steps including three firings.

The four Chinese symbols in circular reserves framed with florals are typical of the "fortune cookie" inscriptions that one sees on these pieces. The characters in this case are written in an odd stylized script that is hard to decipher but the symbol for "myriad" 萬 is obvious as is the one for "fulfilled" 意. So it most likely says: ten thousand (a myriad) blessings/treasures fulfilled.

The marks on the base tell one a lot too and are most intriguing.

which translates as "Hongxian Imperial made".

This mark is a reference to Yuan Shikai (1859-1916) aka Hongxian, who was one of the fathers of modern China. He was a general and statesman during the last years of the empire and during the turbulent years of the early Chinese Republic.

In 1913 he was elected president, assumed supreme dictatorial control, and in 1915 proclaimed himself emperor which did not endear him to his egalitarian supporters. Fortunately for them and the fledgling Republic he died a year later of natural causes.

One of the good things he did, however, was to re-instate the great imperial porcelain kilns of Jingdezhen.

In 1916 he earmarked a huge sum of money with which to do so and appointed his friend and antiquities scholar Guo Baochang to oversee his new production at Jingdezhen. The products were of exceptional quality but were produced for only 83 days as production stopped abruptly when Yuan Shikai died in June of that year.

The porcelain was also exceptionally thin and easily damaged so consequently very little of it survived. The little that has is now extremely valuable and the stuff of museums. For a period of time afterward it was carefully reproduced, most of it to an almost equivalent high standard, and your vase is an example of that period of reproduction in the period of the late 'teens to early 1920s. We know it is not from the 83 day period because all of that was signed in red, none in blue. Besides the mark was slightly different. It was marked Jurentang, which is the other name for this type of porcelain.

Jurentang, literally means the "Hall where Benevolence Resides", which was the name for Yuan Shikai's palace and office.

Your vase is rare and desirable to the rapidly growing Chinese antiques market. Now the Chinese are all so wealthy they are very keen to get their hands on pieces that were made particularly during this early period of the Chinese Republic and especially Jurentang reproductions.

If you were to sell this vase at one of the top auction houses, such as Sotheby's, Bonhams, or Christies, and with the information I've given you, it would fetch in the range of $7000 to $12,000 and that's being quite conservative. If it were offered for sale in one of the Chinese markets like Hong Kong, it could go for silly money. 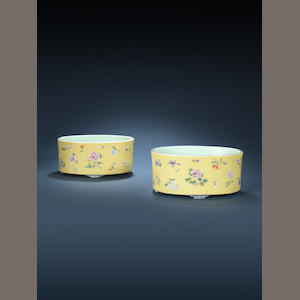 Your vase has a replacement value of at least $24,000 and is what you should insure it for.

What a lovely thing to have! Thank you so much for asking me about it.

Please let me know if I can be of further assistance, I would be glad to.

JeremiahS226
Art Gallery Buyer/Sales
Bachelor's Degree
3,816 satisfied customers
I have a large Asian moon flask dragon vase. It has dragon
it has a symbol on the bottom. It is in very good condition… read more