This question is for Robert the_bishop_king Here are some…

I'll take some more soon........this should keep us going a couple of days?

Thanks so much for the new thread and photos. This is just to let you know I have gotten in all. Had a problem accessing the site again, hence the lack of response, all is well now though!

Can I get some additional information, mostly dimensions:

(1) Buddha head. What material is this, do you know? Is it metal of some sort?


(2) "Oriental carving" How tall? And again, what material? Is it wood with little bits
of inlaid brass wire that look like cloisons?

(3) Cloisonné pot. How big? Can you very kindly provide a photo of the base.

Customer reply replied 7 years ago
Robert, the Buddha head is definitely metal........could not for sure tell you what kind..the patina on the outside looks bronze but inside looks rusty but with great detail still.

The Oriental carving' is about 24" tall.....the lady I got this from said that the spear had been cut off to make a candle stick(it does have a holder for a candle).

here is a photo of the bottom of the cloisonne pot.

Antique Expert: Robert S., Antiques and Collectibles Researcher replied 7 years ago
Thanks, that's very helpful, John, I'll go to work on these shortly.
Customer reply replied 7 years ago
I just realized that I did not tell you that the cloisonne piece is very dense black wood and the inlay is silver/not copper..........

That is interesting and quite unusual, thanks for letting me know.

Customer reply replied 7 years ago
Robert,
I hope you figured out I was talking about the carved
Oriental piece!!!!'

Antique Expert: Robert S., Antiques and Collectibles Researcher replied 7 years ago
Okay, you had me puzzled for a while!

This wonderfully serene creation is Thai in origin. It is a copy of those created during the Ayutthaya Period, a Siamese kingdom that existed from 1351 to 1767. Ayutthaya is a city and the former capital of Siam (Thailand) during that period.

He has the typical elongated earlobes, snail coil hair and domed "ushnisha" (top knot) topped with a flame finial, that characterize representations of Buddha at that time.

It's difficult to date yours exactly, but it is certainly 20th century. This is what an original eighteenth century one looks like 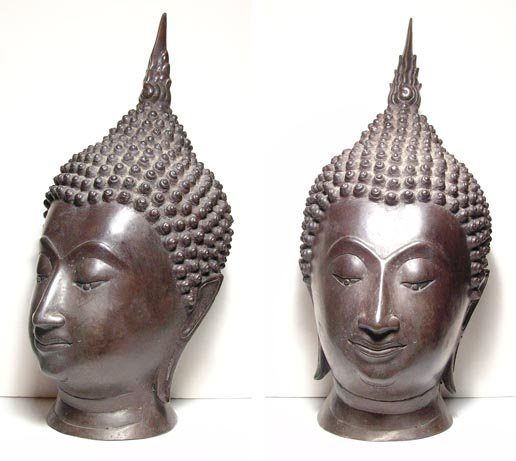 and you can tell how the modeling is a lot crisper and the neck properly finished.

You can see on yours the brushstrokes of the antiquing or patination needed to re-create the look of ancient bronze (like on the ones illustrated). The other telltale sign of a reproduction is the presence of rust on the inside. Bronze never produces a rust like that. Whatever metal it's made of (spelter may be) contains some iron in there. It would be interesting to see if a magnet sticks to it. If it does, it is not bronze.

Regardless of the material, It's a well done reproduction, though, and would certainly have some value.

This is a magnificent rosewood statue of Shou Lao, (or Shou Xing) one of the three Chinese "star gods" (Fu, Lu, Shou) that bring the triple blessings of happiness, wealth and longevity. Shou Lao brings longevity.

In Chinese legend he began as a star in the southern constellation of Argo, and is often called the Old Man of the South Pole. When the time came for him to be incarnated, Shou Lao was carried in his mother's womb for ten years before being born, and was already an old man when he was delivered.

He is nearly always depicted with a large swollen head like this (signifying wisdom) and a long beard (long life) and carrying a gnarly staff and the immortal peach. Yes, that odd thing in his right hand is a peach, said to bear fruit every 3000 years and take a further 6000 years for a fruit to be ready to eat. Anyone who eats one will have their life extended by 600 years. .

What is particularly splendid and unusual about this figure are the (silver!) cloisons inlaid into the wood to give a vague impression of cloisonné. The inlaid patterns also include longevity symbols all over his robe, too.

24 inches tall is quite a size and I'm sure he makes a big impression wherever he's displayed. Added to this, figures of Shou Lao are popular right now in the Chinese collector market and this chap would be much in demand.

Robert S.
Antiques and Collectibles Researcher
BA
7,063 satisfied customers
This question is for Robet/the_bishop_king Robert......I
This question is for Robet/the_bishop_king Robert......I am posting a question to see if it gets to you. These are things that do not belong together but just picked what was 1st in photo bucket. I do… read more