http://i1321.photobucket.com/albums/u546/Johnny4walker/Childsrocker_zps8995ed3c.png
This is a child's rocker

http://i1321.photobucket.com/albums/u546/Johnny4walker/Childsdollcarriage3_zps1b231118.png
These are pics of child's doll carriage

http://i1321.photobucket.com/albums/u546/Johnny4walker/Smallfliptieredtableclosed_zps0b9d8bf3.png
This is an interesting little stand/it folds up to become flat.

Put these items into whatever threads you want.........I just wanted to send them all at once.

Hope you have been well and having a wonderful Spring................John
Show More
Show Less
Ask Your Own Antiques Question
Share this conversation

Hi John and good to hear from you again. Welcome back. Sounds like you have been busy in the meantime. So have I, and luckily you missed my computer hard drive melt down. I am just getting back to normal again.

Lots more treasures, I see. That's good! I will group some of them, others that are higher value or that take a bit more research, I do singly.

Yours are an early to mid 20th century reproduction of a Ming style with a yoke back (crest rail) with scrolled ends that resembles the wings of an official's hat, hence the name. The backsplat is of typical form, too, the panels carved with a stylized happiness symbol 福 and the "Dear under plum tree" motif which is a symbol for job promotion.

The antique examples made from the much prized huanghuali wood with a shimmering wavy grain can sell for tens of thousands. Most of these early to mid 20th century copies sell in the mid to high hundreds.

You asked about the Caithness paperweight. I did not give you an answer on that yet but will do, if you can re-send the photos and close-ups.

I did give you an answer on your two jade trees, as follows:

These are wonderful creations, I have always had a soft spot for them, even though they were once considered borderline kitsch.


Although usually made in China, and date to the 1940s - 1950s, they are designed to look like Japanese bonsai (bonsai literally means "tree in a tray"). The materials and workmanship are superb. All the leaves and petals are hardstones -not jade in this case- but probably bowenite (the leaves) which is almost as hard. The flower petals are usually a stained quartz or marble of some kind, but in this case may be agate.

All meticulously wrapped in wire and convincingly 'growing' from a marble pot.

Verified
Robert S. and 87 other Antiques Specialists are ready to help you
Ask your own question now
Customer reply replied 7 years ago
Robert here is the photo of the Caithness glass vases.................

Hi John, thanks for the photo of the Caithness vase collection.

This was an unusual departure for Caithness. This Art Nouveau inspired design is called the "Ebony Collection". Quite thick gauge glass, very dark purple/blue, almost black, with an overlay of opaque sand color glass and attractive 'growths' of black drawn up from a speckled base like abstract plant forms. I don't think it is very old, produced circa 1999 - 2006.

This example sold on eBay 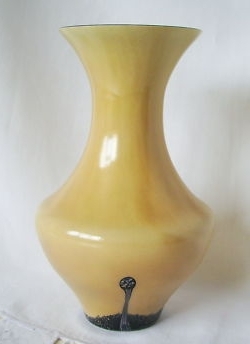 The wood is such a pretty color. I would say it's walnut but it could be beechwood.

Probably French (but could be American-made in the French rococo revival style) balloon back, with some very nice carving, nicely upholstered in a Japanese style silk print on cabriole legs.

This example (upholstery in poor condition) sold at auction 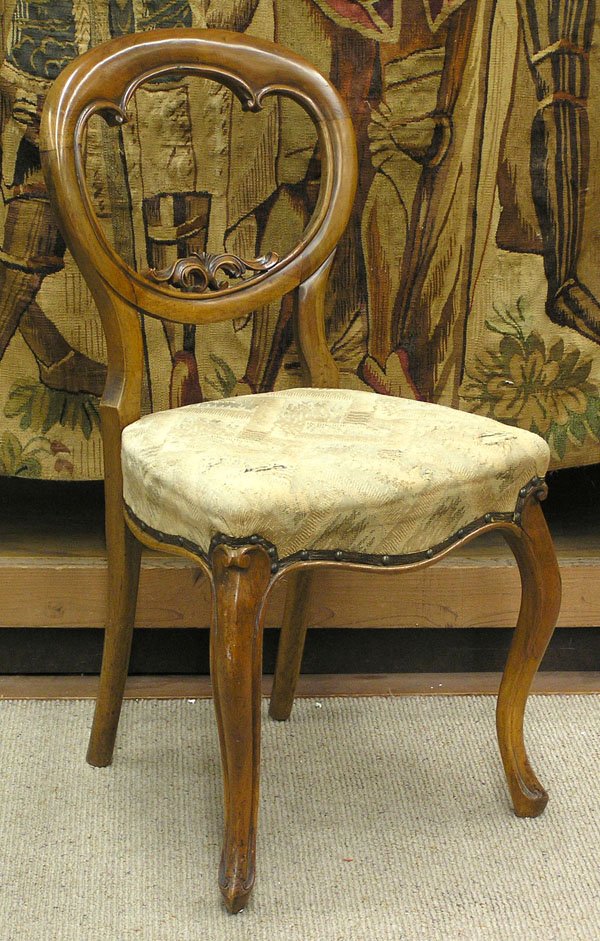 Yours is a very nice antique chair, with graceful lines, I would estimate it in the range of $200 - $300 at auction. Insurance value is therefore $600.

Hope this does the trick.

How are you today?
Thanks for the rating on the above, I'll do the child's rocker and the doll carriage for you together shortly.

Can you give me the approximate dimensions of the doll carriage.

Also, the main photo of it is showing up as "moved or deleted"

this is the link:

Could you very kindly re-attach,

What are the approximate dimensions of the bassinet part? Length and width.

Customer reply replied 7 years ago
Robert,
It is just over 17" long & just over 9" wide

This is a charming piece of miniature furniture. Looking at the color and finish, it's probably not that old, my guess would be 1920s - 1950s. It is very typical of the rustic style bent twig and fumed oak backsplat furniture produced in upstate New York at that time.

I don't think knowing the maker is important to value, there does not seem to be a "Chippendale" of twig furniture. The only ones that sell for big money are the ancient 19th century painted ones (with original paint). 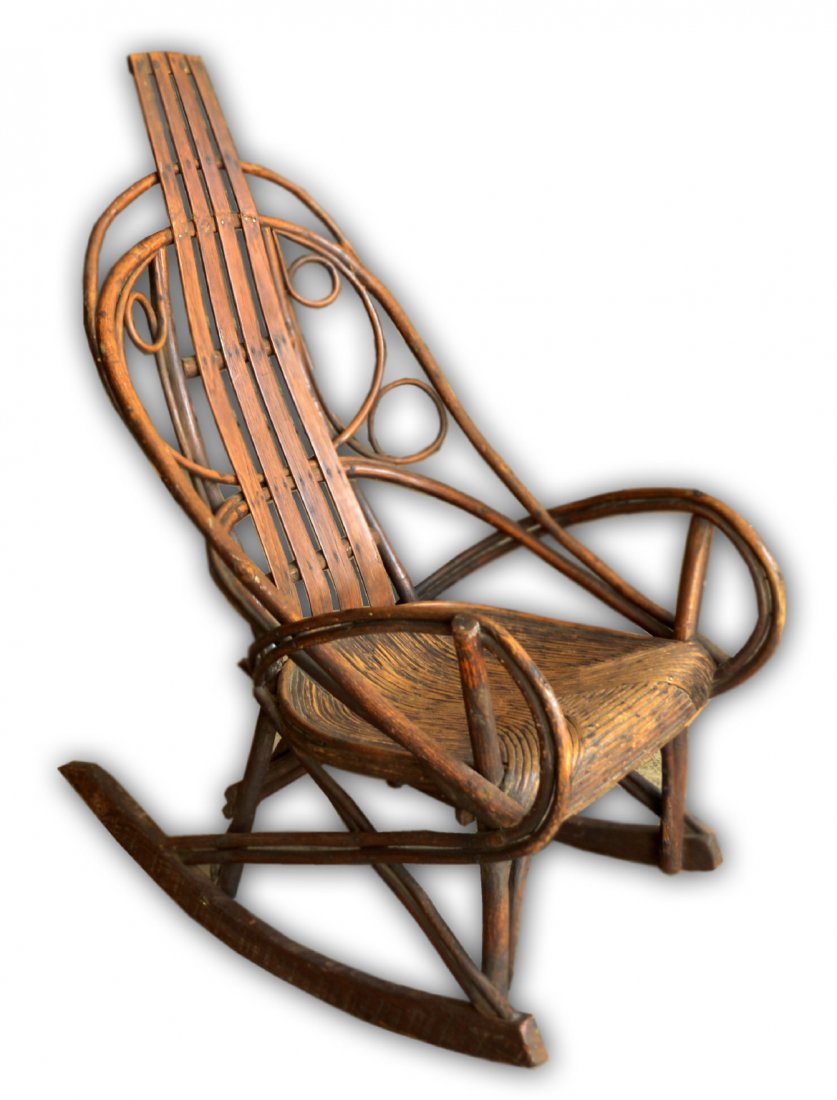 had an auction estimate of $150 - $250 which was a bargain considering its age and patina. 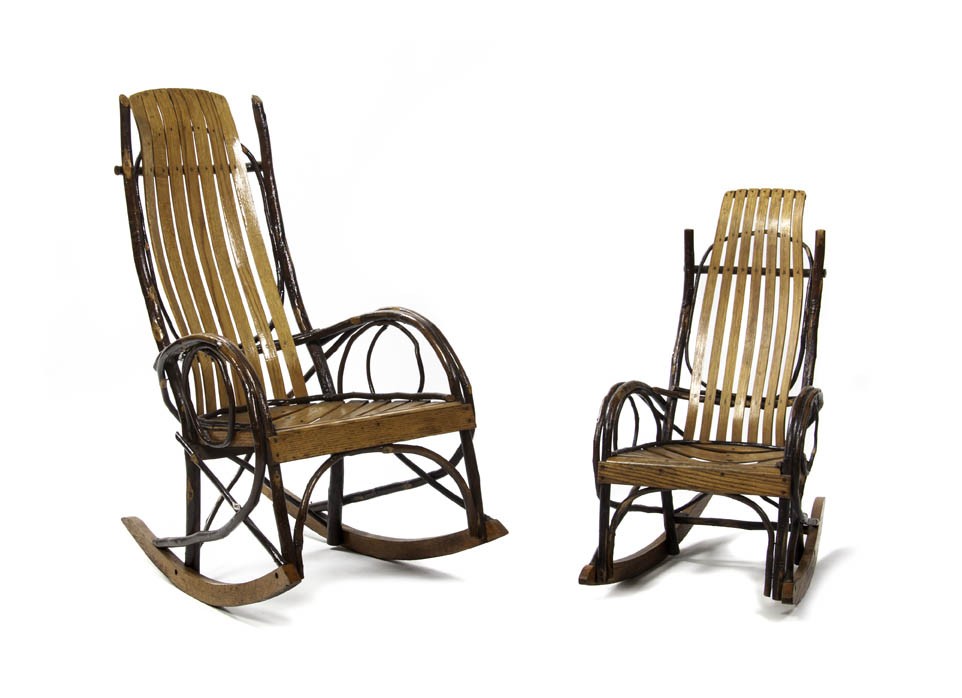 This a wonderful creation, and I love the butterfly motif, also in bentwood (but no relation to the rocker) on the sides. And even the ones on the ends look entomological too, dragonflies perhaps? Very whimsical. 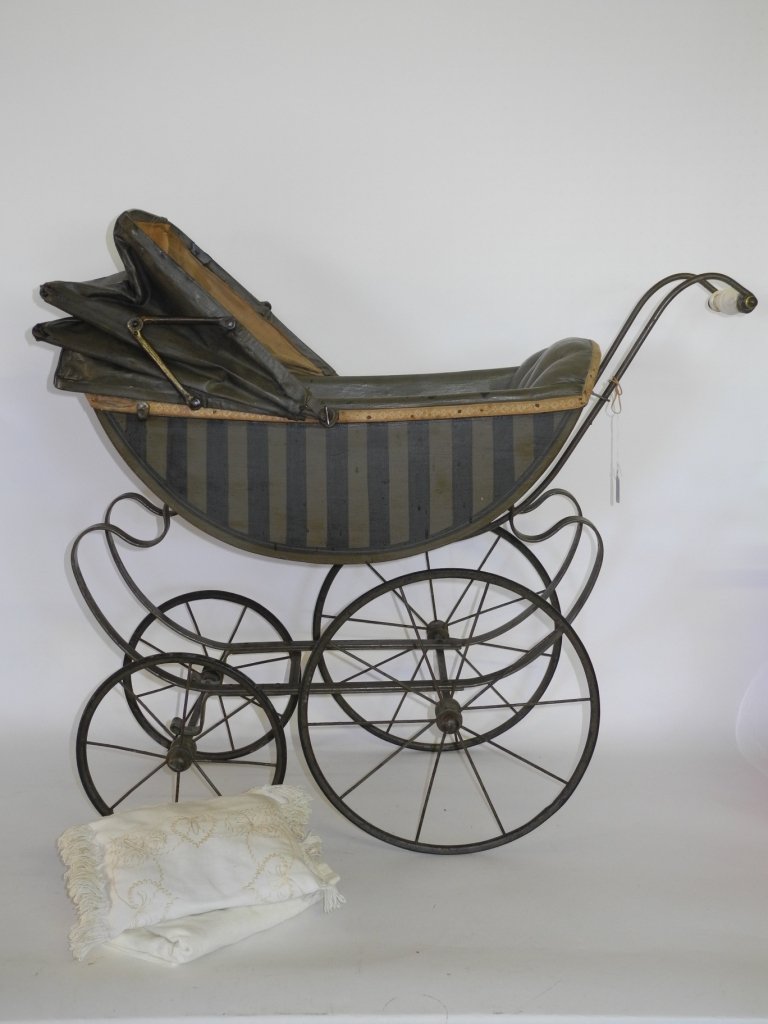 This is the genuine article (above) all ready for a miniature Mary Poppins to push along.

Something tells me yours might be Parisian. Again, not especially old, 1920s - 1930s. They are eternally popular with doll collectors, the painted ones particularly.

This one sold at auction 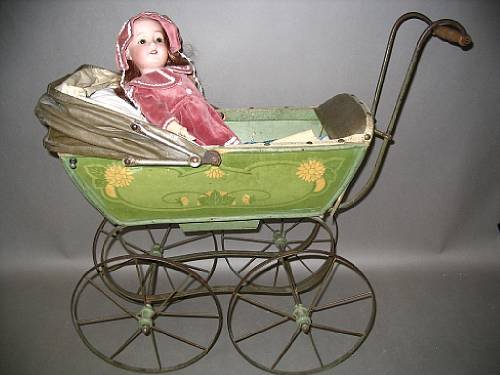 for $432 but it did include the porcelain headed doll (and it's a good deal older than yours).

Hope this helps!
As always, please feel free to ask questions on any or all of this.

Have not forgotten you! Was not able to be at the computer much today.

Will give you information on the remaining three items tomorrow.

Have a great night,
Robert

So let's go through these three:

This chair has some wonderful silk damask fabric and the wood is a pretty color. The cabriole legs and upholstery indicate a French origin or influence.

It is not old, as the bow-stretcher is laminated in a way that became typical of the 1920s & onwards.

It is a little hard to tell what the wood is because of the lighting, it looks like beechwood or walnut.

These English folding cake stands date to the first quarter of the 20th century.

Yours is most likely made of stained oak judging by the wood grain of the trays. Designed with a carrying handle at the top so that it can be brought easily to the table by the butler or footman, in order to serve cakes and desserts, and then folded for easy storage once the meal was over.

This fairly similar one sold at auction for $80 which is about typical.

I would say yours would sell at auction for between $60 - $90 and has a retail or replacement/insurance value of $180.

This is another great old period piece right out of the Great Gatsby era, circa 1920s - early 1930s with its strongly Art Deco influence stenciled geometric design on the door and Mission style hardware. The legs are decoratively turned and with a pot stand at the base for holding a spittoon.

The top would have held a large ashtray which was often permanently attached.

The diagonal handle was a clever way of providing a means to lift the smoke stand, as the custom was to carry it to those who wished to smoke. It would have contained all the paraphernalia for both cigar and pipe smoking.

This particular model was made by the Metal Stampings Corporation, Streator, Illinois whose tradename was "IDEAL".

The label (if there was one underneath) would look like this.

As always please ask if you want further clarification on any of this.