Hello Robert, Sending a picture of a trunk aquired by my gram.

What a beautiful piece of furniture!

Can you very kindly attach a picture of the top. And do the side panels have carving too?

Also, are there any script marks on the lock plate? If so, a photo of them would be a great help.

All panels are carved. Having some issues uploading images. I currently do not have a key to unlock the chest. It is cedar lined.

Sorry you are having uploading issues. Your picture size may be a bit large. Imgur works best at sizes lest than 1 megabyte. You could try www.tinypic.com another public picture hosting site that's easy to use and automatically reduces the pic size for you.

However, I do have enough to go on, so don't stress with extras. The photos you've already sent are excellent.

Leave this with me and I will come back to it later today. I have to be away from my computer for a while. Life intervenes!

Thinking we may be having communication issues, last email from you on the trunk was on the 28th. Just answer is asking for feedback on this via the auto messaging as if l had received a final answer. Or are you waiting for more info from me? Wayne

Hi Wayne, I do apologize, the communication issue was my fault. I am still having repercussions from losing my hard drive last week. I'll have a full answer for you shortly and no more information needed at this point.

This chest is splendid. The fact that it is cedar lined means it's referred to as a camphor chest. And is probably made entirely of camphor wood. Traditionally these were used to transport fragile porcelain, silk and other delights from the far east to the west and of course became indispensable for the storage of silks and other fabrics away from the ravages of clothes moths.

Camphor wood is a little different from our cedar wood in the west (which is a species of juniper). It comes from the camphor laurel, an evergreen tree, Cinnamomum camphora, native to China and Japan that has aromatic oils that are even more repellent to moths than cedar wood.

It's sometimes hard to tell Chinese from Japanese with these intricately carved pieces of furniture. The frieze of cherry blossom along the side of the lid suggests Meiji period Japan, the Japanese being marginally more obsessed than the Chinese with the symbolism of cherry blossom as a metaphor for the transience of life, but there are other details that place its origins in Canton or Shanghai, particularly the engraving on the lock and its circular shape. The small vignette of distant hills in the lid is also emphatically Chinese. And the scenes of the visiting dignitary and his wife are also quite typical.

As for value, despite the ornateness and detail in the carving, these camphor chests are not as appreciated by collectors as they should be, however their value is improving. Now that the Chinese are all becoming so wealthy the price of all things Chinese in the decorative arts has been increasing significantly worldwide and I know this chest will appreciate in value in the not too distant future.

Currently, this similarly carved example, and of similar date, but not in as good condition as yours 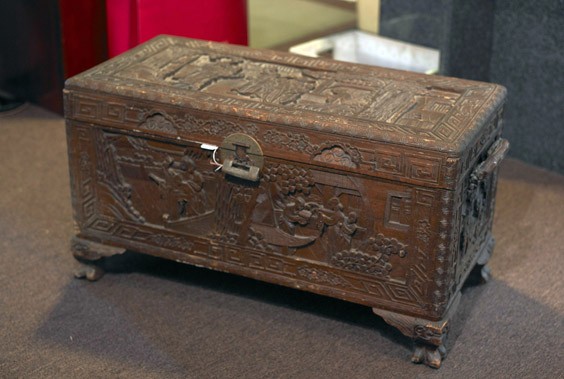 It therefore has a retail or replacement value of $1350 and is what you should insure it for.

As always, please let me know if I can be of further assistance with this, I would be glad to.

Hello Robert the history, and insigt you have provided on these pieces is fascinating. We have made copies of the great answers you have provided, and intend to keep them available, so future generations will have these great explanations available. l also am surprised that these trunks are not better appreciated, the detail and workmanship are fantastic. The amount of time to produce a work like this must have been significant. Thanks for your well thought answer Wayne

My great pleasure, you are welcome.

I'm delighted you are adding the description to the pieces, it does help greatly for future generations. I can't tell you how useful to me little scraps of notes attached to things have been.

Many thanks for the rating and the bonus, much appreciated!