Hello Robert, . m sending...
Hello Robert, . m sending photos of 1 portrait plates that were accquired in europe around 1900. Have no idea of their origin other than the name Dresden on the bottom. l own 6 of these, my sister has another6. The story is that these were the 12 most beautiful women of the era. Always found it amusing that one is obviously a maid. The maid plate is unnamed, all the rest were members of the aristocrac​y, one is of Marie Antionette​. Was told that this may be guild work
Show More
Show Less
Ask Your Own Antiques Question
Share this conversation

Hi Wayne and welcome back! I would be delighted to help you with these magnificent plates.

This is workmanship and painting of the first water. You don't see many like these. The raised gilding in the Sevres style around the border is as skillfully done as the portrait itself.

If you could very kindly attach photo(s) of the marks on the back of the plates, I'll see if I can track down the decorator. It's unusual (but not unheard of) for work of this quality not to be artist-signed on the portrait itself, as they normally are.

Thanks Wayne for all the excellent photos.

Now that I see the marks on the back, I realize these are not quite as old as I first thought (first quarter twentieth century) and they may be photolithographs heightened with hand painting and which would explain why they are not artist-signed.

Can you do me a favor and have a look at the pigment under the strongest magnifying glass you can find, and in really bright light, and tell me if you see dots or cross hatching (indicating a printed image).

Robert, l can't see either dots, or cross hatching with a quite strong magnifying glass with my untrained eye. Brush strokes are visible through the finish of the plates, l am uncertain if is painted or hilighted however. Hope this helps a bit Wayne

Thanks Wayne, that helps a lot. They are indeed hand painted. That's good news.

You would have seen dots if they were there, believe me.

These plates are superb.

These sets of six, or twelve, beauties were a specialty of the Dresden decorators. There were dozens of porcelain decorator studios in Dresden during the late 1800s and early 1900s, and two firms in particular, Wissmann and Lamm are considered the best. Yours are Wissmann decorated.

Here's a very similar set coming up for auction at Brunks shortly: 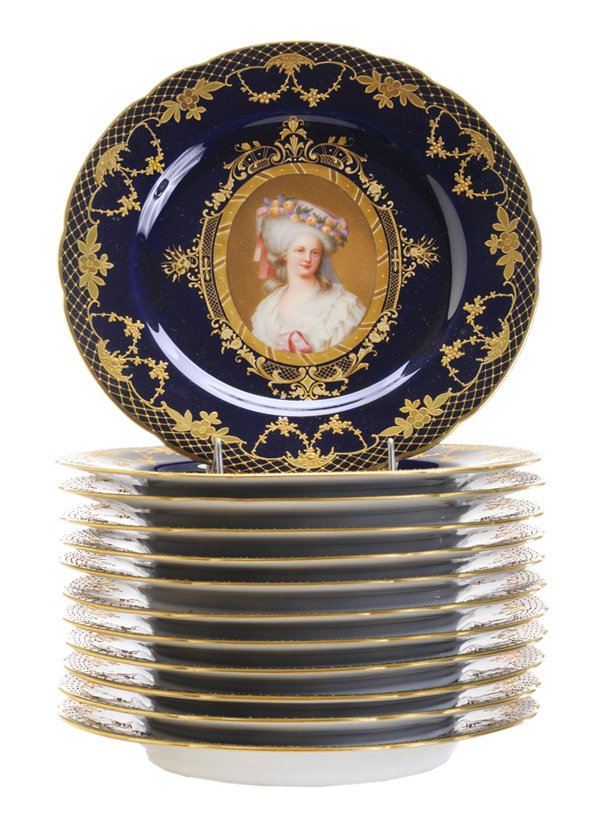 Each painting is an adaptation of a famous portrait of the beauty and sometimes the original artist after which it was adapted is mentioned along with that of the subject.

The time and expertise that went into making these plates is nothing short of phenomenal. The portrait enamels were painted in stages and each stage had to be fired in a muffle kiln to seal them to the porcelain. That was before the border was even begun by the gilder. This wonderful rinceau pattern is a combination of acid etching, jeweling and raised paste gold enameling, all highly skilled and time consuming work. Then the plate had to be returned to the kiln one last time to fire the gold enamel. Each visit to the kiln meant risking a blemish or worst of all, a catastrophic crack, and the destruction of weeks of work.

Let me explain the marks on the back. The first think to notice is the W in the shield in blue and over-the-glaze. This is the Wissmann decorator mark. The fact that it also says "Germany" means that they date to post-1891 when the McKinley Tariff Act of that year required that all export/importers indicate the country of origin on their wares. The fact that they are portrait beauties dates them to quite a short period when this subject matter was fashionable, circa 1895 - 1910.

The gold rose was applied by the gilder (also part of the Wissmann decorator studio) to cover up the underglaze maker's mark of the plate, the maker of the 'blank' porcelain. This was usually one of the better Bavarian porcelain manufacturers such as Hutschenreuther or Rosenthal, in fact you can almost make out the shadow of the word 'Bavaria' under the leaves of the rose. The reason it was covered was in case anyone was led to believe that the artwork was done by the maker of the blank (most of whom had their own factory decorators) rather than the expert craftsmen and painters at Wissmann.

As for value, each individual plate would sell at auction for at least $600 - $900. They might even go for more. This set of six portrait beauties plates by Lamm 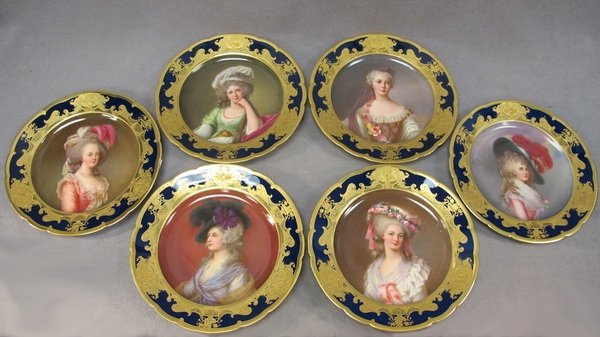 Your set of six has a replacement or insurance value of $10,800.

And your sister's set should be insured for the same amount, too.

Wow, Robert impressive research, and the history you have provided is very informative, helpful, and purely fascinating. We have enjoyed these plates, and many other items through three generations, and the purpose of these assesments is to place a relative value so they can be passed on to 4th, and 5th generations in an equitable way. Thanks for your expert assistance once more. Wayne

Delighted to have shed some light on these wonderful plates and very glad to hear they are going to continue as family treasures. And now you should have all the 'ammo' you need to intrigue the young 4th & 5th generation, and allow them to grow to appreciate them every bit as much as you do.

Have a great weekend and thank you so much for asking me about them.

Diana F.
Appraiser
Bachelor's Degree
9,697 satisfied customers
Show more
Disclaimer: Information in questions answers, and Show More
Disclaimer: Information in questions, answers, and other posts on this site ("Posts") comes from individual users, not JustAnswer; JustAnswer is not responsible for Posts. Posts are for general information, are not intended to substitute for informed professional advice (medical, legal, veterinary, financial, etc.), or to establish a professional-client relationship. The site and services are provided "as is" with no warranty or representations by JustAnswer regarding the qualifications of Experts. To see what credentials have been verified by a third-party service, please click on the "Verified" symbol in some Experts' profiles. JustAnswer is not intended or designed for EMERGENCY questions which should be directed immediately by telephone or in-person to qualified professionals.