This question is for Robert/the_bishop_king Robert, here…

Robert, here is I think the last oriental. This is a print of a hanging of The Lion Dance. Then we have another pair of candlelabra and as you can see very ornate (24" high). I am however missing 1 bobech as it was lost in one of the many moves this stuff has experienced. The next item is an ormolu mirror frame with places for rouge pots on each side. It is hindged and I was told it was so the ladies could check the top of their hair do.

Hi John, it looks like you saved the best till last!

This is another print by Katsukawa Shunshô (1726-1792) the same artist that did your bijin-ga, but a much more special one, and could easily be original. 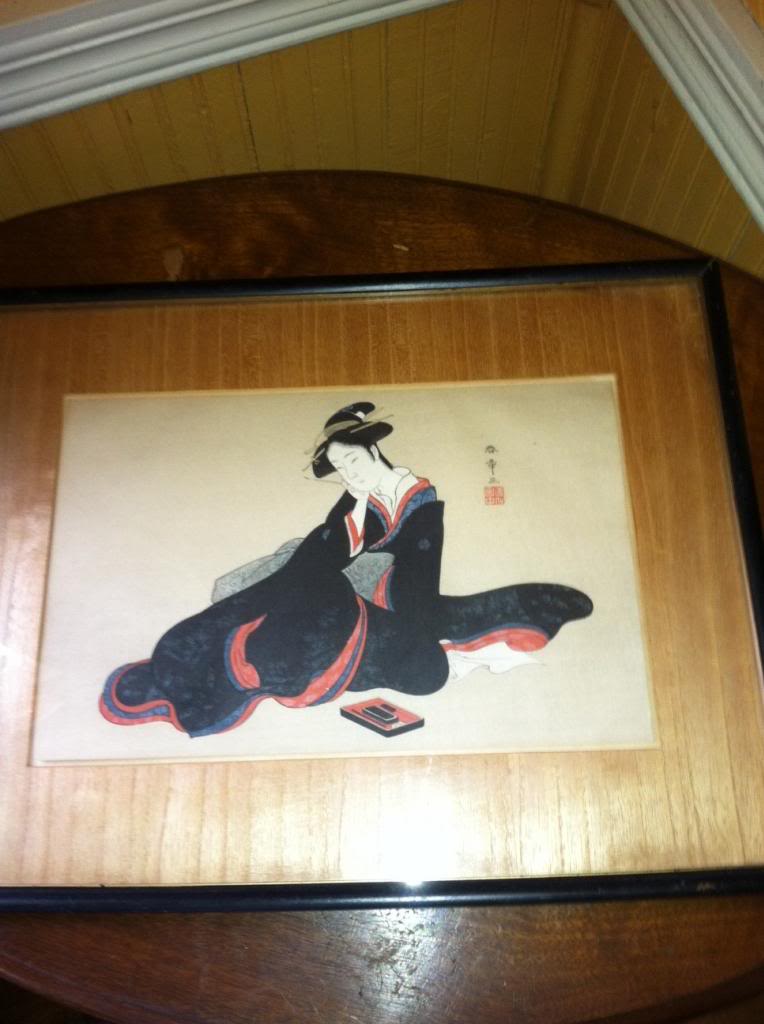 The signature inscription on "The Lion Dance" is slightly different, it says:

Which translates as: "Katsuharu screen section" and with a Kao seal. This indicates it is part of a diptych with this being the other half:

Assuming yours is an original woodblock print (nishiki-e) then it dates to the Edo period, around 1787-1788 and it illustrates the actor Onoe Matsusuke I (in drag) performing the shakkyo or lion dance with peony blossoms.

As I may have mentioned before, Katsukawa's speciality was yakusha-e -pictures of actors. He founded a school, the Katsukawa school and had many well known pupils - such as Hokusai, Shunko, Shuncho and Shunzan.

In the 1780s Shunsho turned his considerable talents to paintings of bijin-ga (beautiful women paintings) and produced many glorious examples. As was written at the time, 'A painting by Shunsho is worth one thousand pieces of gold'.

This is what the whole woodcut looks like. It was a long hanging scroll printed on silk

and you can see there's a poem above that's been cropped off yours (this was quite typical, but does affect value). There's an example of this full scroll in the Museum of Fine Arts in Boston.

I think you are quite right about the hinged top section. In the days of big hair (1770 France) this would have been the only way to see the whole coiffe. 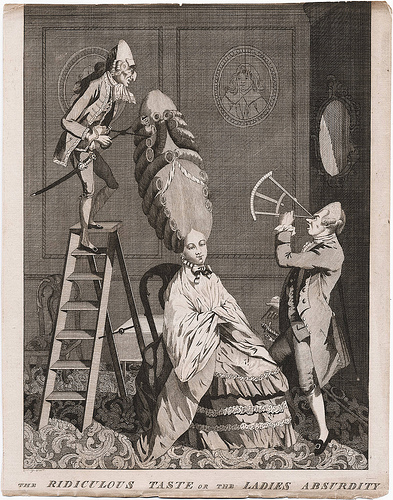 Yours was made in the days when this was called a "looking glass". The word "mirror" was considered very parvenu.

It is reminiscent of a trumeau mirror but is definitely designed for a dressing table. The rouge holders are a nice touch, but could also be sconces for chambersticks for illumination.

These are a great pair of French fin de siecle garniture candelabra. Or they could be American made in the Napoleon III taste, circa 1890. I do like the figural touches, the heron heads near the base and the tripod griffin footed bases and detailed neo-classical decoration.

This fairly similar pair, and the same size, sold at auction 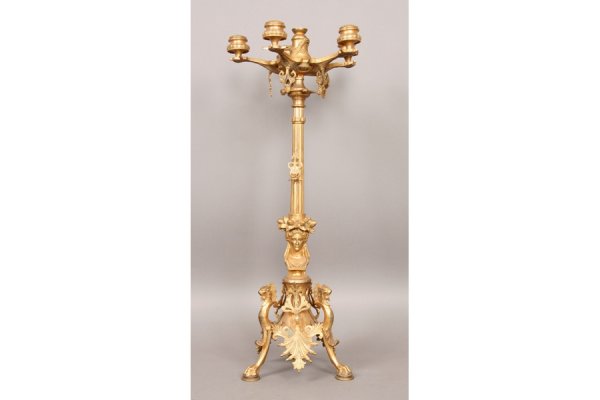 Hope this does the trick!

Verified
Robert S. and 87 other Antiques Specialists are ready to help you
Ask your own question now
Customer reply replied 7 years ago
Robert, I think I have discovered some sad news about my Lion Dance print..............I am sending a photo of my discovery(it is still a beautiful thing to look upon).............I am also sending you bigger photos for the other items(except the Caithness glass)and a little treasure you may have to put on another thread............

O what a pity, yes, it's a copy from the Boston Museum of Fine Arts shop.

Still, as you say, it's a beautiful thing to look at, and at least you can take comfort from the fact that Boston MFA prints are such good quality, they command a little premium of their own, so it's always going to have a reasonable re-sale value of $300 - $400.

I have to be away from my computer till this evening, but will gladly give you some info on the others this evening.

Okay back again, sorry about the pause.

So let's go through these four items:

(1) Pair of blackamoors with torcheres

In feathered headdresses and holding a torcheres, most likely bronze or possibly brass, and unpainted (most of these have the faces and limbs painted black).

They are always described at the auction catalogs as "Continental" but I have my doubts. I believe they are from one of the early 20th century New York foundries and are 1920s - 1930s in origin. Very much a Great Gatsby era item.

This particular style is usually 15" - 16" tall (if substantially more, let me know). There is a taller version.

These are wonderful creations, I have always had a soft spot for them, even though they were once considered borderline kitsch.

Although usually made in China, and date to the 1940s - 1950s, they are designed to look like Japanese bonsai (bonsai literally means "tree in a tray"). The materials and workmanship are superb. All the leaves and petals are hardstones -not jade in this case- but probably bowenite (the leaves) which is almost as hard. The flower petals are usually a stained quartz or marble of some kind, but in this case may be agate.

All meticulously wrapped in wire and convincingly 'growing' from a marble pot.

This is quite lovely. You have saved the best till last again.

Called a "tantalus" after the Greek mythological figure Tantalus who was forced to stand in perpetuity, in a pool of water, under a fruit tree with low hanging fruit ever eluding his grasp, and the water always receding before he could take a drink. From his torture came the word "tantalize" which is exactly what these locked liquor cabinets are supposed to do and did, especially those designed with clear glass panels (as most of them were) so one could see the drink within.

Yours is veneered with breathtakingly beautiful burr walnut (slightly different from 'burl' walnut, burr walnut is deliberately grown or coppiced to produce those 'eyes' or burrs). The case is of serpentine form, typical of Napoleon III era, circa 1890s, with panels of intricately scrolled rococo marquetry and feather edge banding.

This one, fairly similar but with less interesting and less intricate inlay, but with prettier glassware 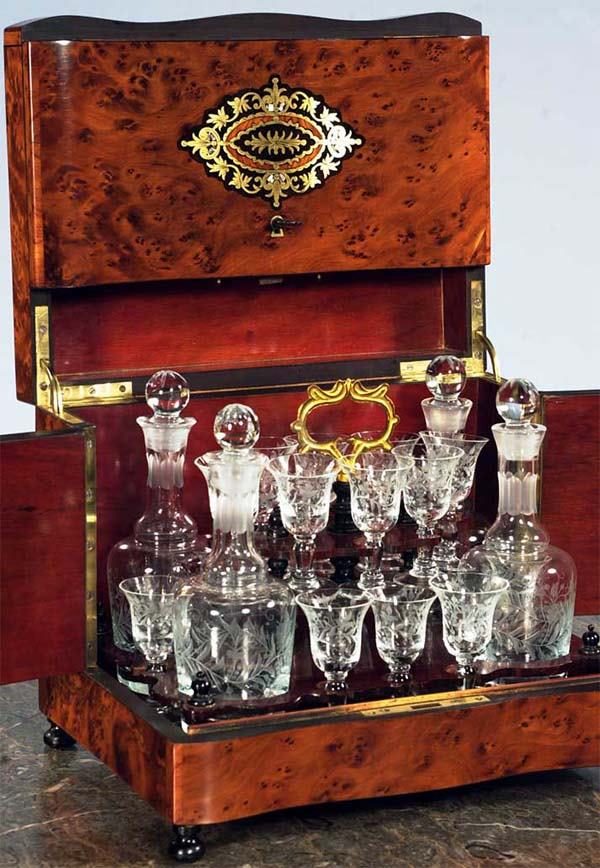 It has a replacement value of $9000 and is what you should insure it for.

Very nice to see one of those again.

Hope this does the trick,
Best wishes,
Robert

Robert S.
Antiques and Collectibles Researcher
BA
7,063 satisfied customers
This question is for Robet/the_bishop_king Robert......I
This question is for Robet/the_bishop_king Robert......I am posting a question to see if it gets to you. These are things that do not belong together but just picked what was 1st in photo bucket. I do… read more