This question is for Robert/the_bishop_king Robert I have…

Robert I have a bronze Foo Lion incense burner............the head is removable to put the incense in I suppose. Several oeioke have looked at it but cannot determine its age or value. I also have a 'one leg' bronze figure with a basket........it must rest on a rock or something to sit up. It has a place for a fishing pole in his right hand. Any information you could provide woule be great.

Answered in 2 hours by:
Antique Expert: Josie-ESA,  replied 7 years ago

Verified
Hi, I am a Moderator for this topic. I sent your requested Professional a message to follow up with you here, when he is back online. If I can help further, please let me know. Thank you for your continued patience.

Just to let you know I got this one too and will get you an answer asap.

Can you give me the heights on these two.

Robert, did you get the heights of these? I sent them on another thread. The little happy face finally did turn green today. I have no idea why they will not do it for me the first time around,...................

Okay thanks! John. Have tracked it down.

Just a couple of questions about your wonderful foo dog piece.....

Does he have these little rosettes of 'fur' engraved on him? 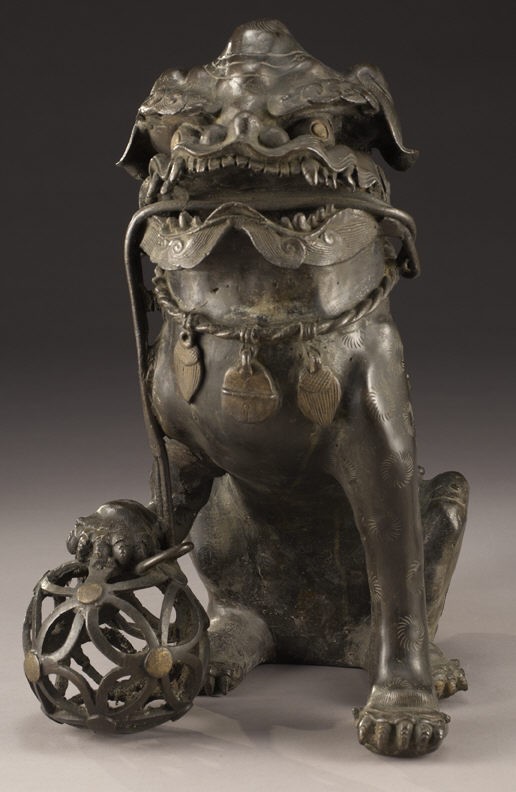 Also, is the tag/tassel around his neck part of the casting or a separately made piece?

Hope you are having a restful weekend.

The tassel is part of the casting but it breaks at neck when head is removed. I think he has what you would call fur but not sure so I'm sending photos. Hope these help.................John

Thanks for the extra photos, John, that helps a lot. I can see that this is definitely an old one but not as old as the one in the photo I sent, which is 16th century (Ming dynasty). The reason I asked about the 'fur' is that the Ming ones have engraved fur and detached dog-tags around their necks.

I would say yours is a late 19th century reproduction but a good one.

It is indeed a censer. These bronze foo censers with paw on ball are rare. The geometric pattern on the ball has come to be known in the west as the "flower of life" and one of a number of patterns that are the stuff of sacred geometry, known about by Chinese scholars thousands of years before new-agers 'discovered' them for their crop circles and other geomancy.

This one of the same age and size sold at auction 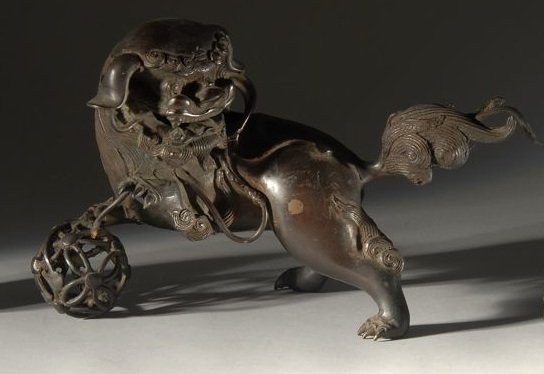 This is a statue of Urashima Tarō, but he's lost his turtle! He should be perched on the turtle's shell thus: 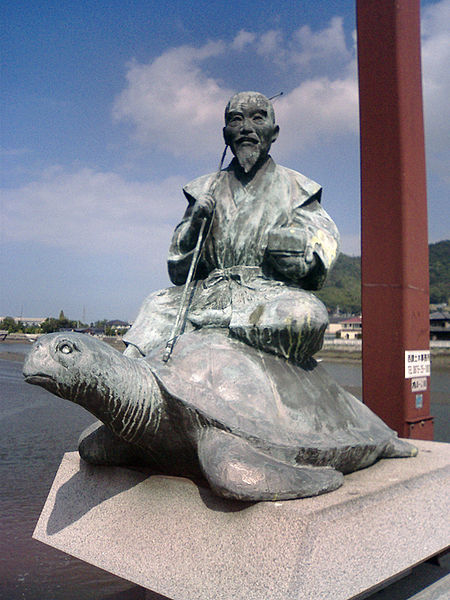 and holding a fishing rod.

Urashima Tarō is the fisherman hero of a Japanese legend who rescues a sea turtle from being tortured by a gang of boys. It turns out that the turtle is Otohime the daughter of the emperor of the sea, the dragon god, Ryujin.

Urashima Taro is rewarded for his kindness with a visit to the palace of the dragon god at the bottom of the ocean. He is taken there on the back of another turtle, where he meets Ryujin and Otohime, now changed from a turtle to a beautiful princess.

He stays there for three days but soon yearns to go home and asks Otohime to return him to his village. She agrees and gives him a magic box called the Tamatebako, with explicit instructions never to open it. Upon his safe return to his village, he finds that 300 years have gone by and nobody recognizes him. He grows depressed and absentmindedly opens the Tamatebako from which a cloud of white smoke emerges and engulfs him. When it clears he notices he has become an ancient 300 year old man with a bent back and a long white beard. From the sea comes the sweet plaintive voice of the princess: "I told you not to open the box, inside it was your old age".

It's hard to know what he's worth without his turtle, but if he's bronze and the early 20th century date he looks to be, I would say if you saw him for sale in an antique store he would be priced at about $375.00 (replacement/insurance value)

Verified
Robert S. and 87 other Antiques Specialists are ready to help you
Ask your own question now
Customer reply replied 7 years ago
Are we complete?? I am waiting for an answer to my inquiries about why my subscription account is not working and why I have to make deposits before I can send you a question?????

Hi John, I'm not sure how to answer this. It sounds like you are having subscription issues. Do you need me to help resolve this?

Happy to help sort this out if I can.

My fingers and toes are crossed!