Interested in value of japanese china set, marked "Japan" on…

Verified
Hello, and welcome! My name isXXXXX'm happy to help you.

Select the photo or photos that you want me to see from the box that will pop up.

Then copy the link they give you and paste that link into your next reply to me.

(it will look similar to this http://www.imgur.com/xxxx)

Can I have your name so we can chat on a first name basis? Thanks!
Customer reply replied 8 years ago

My name isXXXXX issues with imgur. Can you see this file as jpeg? 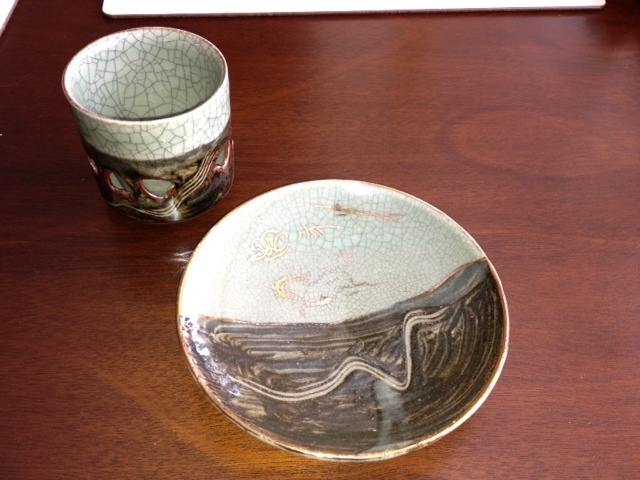 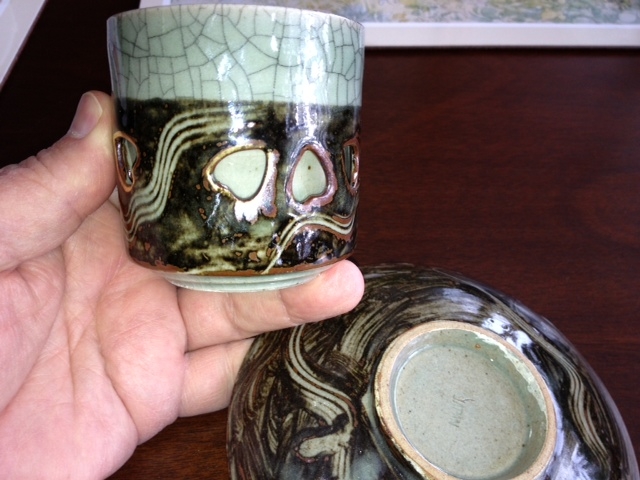 Antique Expert: Diane in PA, Appraiser replied 8 years ago
Hi Bernie. Yes, id say that does look like a Japanese set! Interesting, too. How many pieces in all? I know its a pain, but can you list them for me? (qty of each). It might take me a while to find a value, as I'll have to find a few com parables, so please bare with me, OK?
Customer reply replied 8 years ago 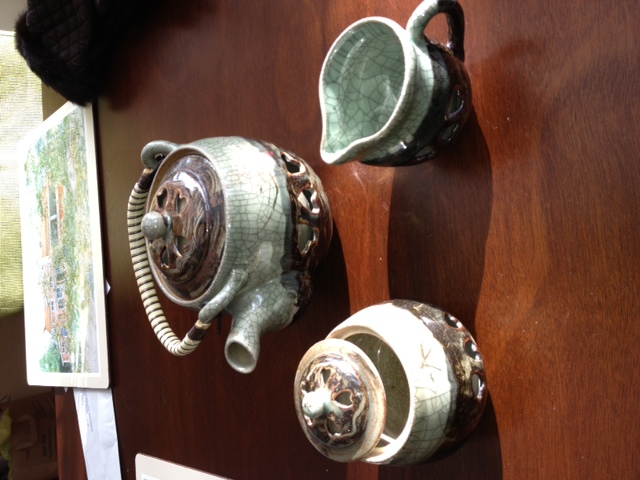 Just checking. Did you get the inventory list with pic of tea pot set?

Antique Expert: Diane in PA, Appraiser replied 8 years ago
Hi Bernie. Yes, I received the pic of the sake pot, but not the list, unless "I have many pcs. teapot, vases, saucers, plates, saki cups, etc." is the list ?
Customer reply replied 8 years ago

Antique Expert: Diane in PA, Appraiser replied 8 years ago
Awesome. Thanks, Bernie!
One more question. Where it reads "Japan" -- is that stamped "into" the pottery or is it stamped on with a rubber stamp/paint? Hard to tell by the photo.
Customer reply replied 8 years ago

it looks like it is stamped into the pottery, See better shot found on large plate. 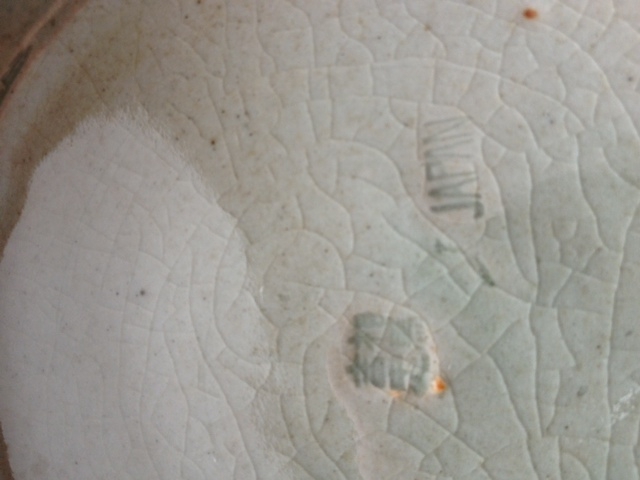 Antique Expert: Diane in PA, Appraiser replied 8 years ago
Bernie, what you own is a modern version (as opposed to 16 C.) of "Raku Ware". Raku means "enjoyment", "comfort" or "ease" and is derived from Jurakudai, which is the name of a palace, in Kyoto. Raku became popularized in America in the late 1950s with the help of Paul Soldner. Raku does not mean the same thing in Japan that it means here. We Westerners took the process and changed it to a decorative process leaving out the spiritual symbolism, since they were originally wares expressively for the Japanese tea ceremony.

You have what would be known as "Western raku" (not "real" raku). Western raku potters rarely use lead as a glaze ingredient, due to its serious level of toxicity (especially eating and drinking from it), but may use other metals as glaze ingredients. Although almost any low-fire glaze can be used, potters often use specially formulated glaze recipes that "crackle" or craze (present a cracked appearance), because the crazing lines take on a dark color from the carbon. The amount of oxygen that is allowed during the firing and cooling process affects the resulting color of the glaze and the amount of crackle. Western raku is also typically made from a stoneware clay body, bisque fired at 1,650 °F, and glaze fired (the final firing) between 1472–1832 °F.

The result is often like the pottery in this photo: 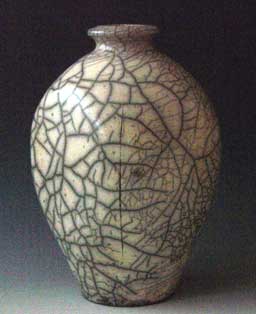 You can see and read more about it here:

Shino glazes are high in both alumina and silica and therefore tend to be rather stiff in the fire. That is, they do not flow when molten like most other glazes. Therefore, the glaze application is less forgiving. The mode of application, including drips and flaws, will be evident when the pot emerges from the kiln. Generally, shinos are applied by pouring or dipping. It appears yours were dipped. Simple brush strokes of wax-resist over the freshly glazed piece will show up as subtle marks on the fired glaze. Finger painting on the surface of the freshly applied, wet glaze gives it a fresh look and added character.

As far as putting an actual maker's name to these, that might take forever because the mark is more commercially oriented, being just "Japan". Vintage (and newer) Japanese pottery and porcelain pieces can indicate the name of the factory, the potter, the decorator, the pattern, the customer, the exporter, the importer or both or a part of them, or maybe just read "Made in Japan", "Japan", "Nippon", "Happiness" or "Good luck" in any number of ways. Increasing the confusion are the hundreds of porcelain decorating firms active in the early to mid 20th century simultaneously putting many different marks on the same wares seemingly at random but probably for some reason. To give just one example, the Noritake company (which has been active for about one hundred years), are thought to have used over 400 different marks!

[updated - I just found the maker!

] It is Somayaki. They say:

The galloping horse motif is painted on Somayaki following the tradition of the Kano School of Painting, one of the most prominent and respected schools of art in Japan. Another unique feature is the use of "double walls". The pieces are constructed with an inner wall which can be seen through cut-outs in the outer shell. As well as adding an interesting dimension, this feature also has the added advantage of keeping the tea warm while leaving the outer surface cool. "Aohibi" is the name given to the distinctive blue crackled glaze seen on most Somayaki ware. A combination of these three distinctive features combine to create warm, rustic pieces imbued with a sense of history and peculiar to the area in which they are produced.

If you scroll halfway down the following Web site, you will see what they charge for these wares today. Most of them are sold out though. (I wish I found this page 1-1/2 hours ago, lol)

So I see you have a 27-pc. set. That's quite a set, Bernie. If you are wanting a value for insurance purposes, you can total up the prices for the pieces on the site I just gave. Of course that final value would be for "replacement" purposes or very high retail.

A more reasonable "resale" value, meaning what you might get should you put them at a fixed price on eBay or a similar selling venue would be more in the $250 to $500 range, depending on various factors such as the condition of the wares, how good your photos are, keywords in title, timing, etc. And the economy, but of course!

There is a small set on eBay right now with an asking price of $999 (which I know they'll never get).

Actually, there is a whole bunch of it on eBay (wish I saw this earlier, but I didn't know the maker of the wares)

Still, you've got the largest, most complete set I could find. That alone ups the value when compared to the pieces on eBay.

I hope I provided you with excellent service today, Bernie.

If so, kindly rate me by clicking a smiley face.

Otherwise, if you still need help, just reply to this message again.

I wish you the best with this. I hope I didn't confuse you too much. Have a nice evening.

Great job in a very short time. Thanks again

Antique Expert: Diane in PA, Appraiser replied 8 years ago
You are welcome. You can request me anytime, Bernie. "Diane in PA"
Was this answer helpful?
Yes
No