Really gorgeous Worcester piece with charming faux Canton seal. Any condition problems apart from the hairline crack I can see? (extending from the rim at 10 o'clock)

The two urns are Capodimonte but look late 19th/early 20th century. Considering how rare your other pieces are, I would like to double check the marks, just to rule out an earlier date. Could you very kindly try another photo? Also is the crowned N mark over the glaze or under the glaze? If you can feel it with your fingernail it is over the glaze.

I will try another photo of that mark tomorrow for you. I am working on the Meissen pieces now and have found that I can do better on macro close up with backlight fill in. Also will check on if I can feel it or if it is under the glaze. I really don't think this looks like anything else they bought so I'm thnking it may have been a gift from someone.

The other plate appears to be perfect and I see nothing else with this plate. I think I have a teacup and saucer in the same pattern.

Yes, you are right, the Capodimonte is not their style at all. I would expect something from the eighteenth century Doccia factory which was Capodimonte's most artistic period. And this is definitely not that.

Good to hear the Worcester plate is in good shape. Will include a valuation for the teacup and saucer too.

Its not great but this is the mark. It is under the glaze.

Good lord! Good job you told me it was a crowned N, it looks like a foggy day in a petri dish! But not to worry, this is early twentieth century Capodimonte and there is no need to agonize over the details of it too much.

The underglaze N usually indicates an earlier origin, circa late 1800s to early 1900s than the overglaze mark.

The problem with this mark is that it is one of the most reproduced marks after the Meissen crossed swords, particularly following World War II when an epidemic of bad lamps in the 1950s & 1960s with the crowned N pretty much trashed the brand for good.

Neither the crowned N nor the Capodimonte name were registered trademarks and so could be used by anyone in Italy who wished to stamp their pottery with them.

Having said that the early 1900s examples like yours do still command good prices. 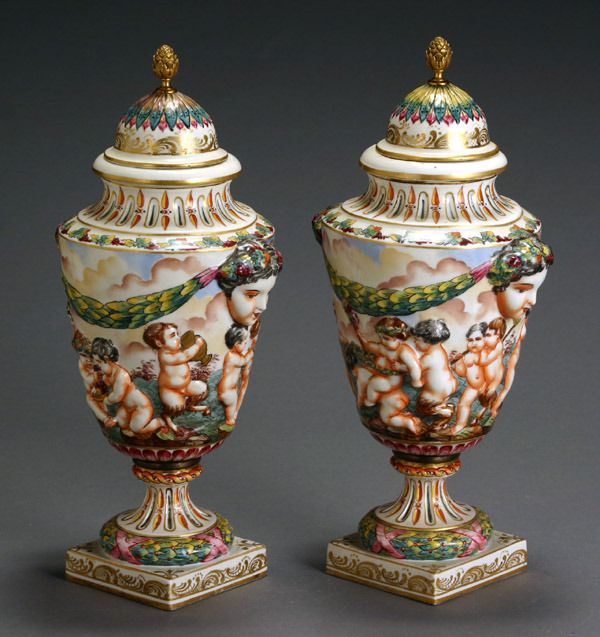 A junket dish was a particular form of shallow bowl fashionable in the middle of the 18th century for a popular dessert at that time called junket. It was a kind of forerunner of yogurt, a sweetened milk concoction curdled with rennet and to which fruit was often added.

The name of Dr John Wall is frequently attached to the early period of Worcester porcelain, from 1751 -XXXXXWall was one of the founders. Although he died in 1776 the "Dr Wall" period is generally extended to 1783 when XXXXX XXXXX died.

He was the first manager of Worcester and oversaw its earliest productions which were some of the finest porcelain that England has ever produced.

This early ware was a soft paste porcelain (not soft in the literal sense, but soft in appearance and artistically its decoration is more pleasing than true 'hard paste' porcelain). The decoration on this bowl is wonderfully Japanese in influence, copying the palette and conventionalized chrysanthemum and brocade designs of late 17th century ko-imari which became known as the "fan pattern".

Considering its age and rarity and artistic merit I am always astonished at how affordable Dr Wall Worcester remains: 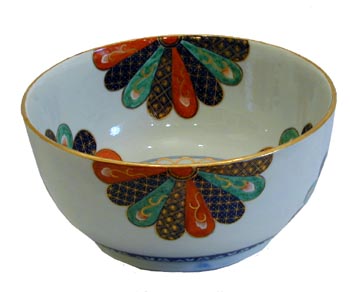 A fan pattern cup and saucer like this one: 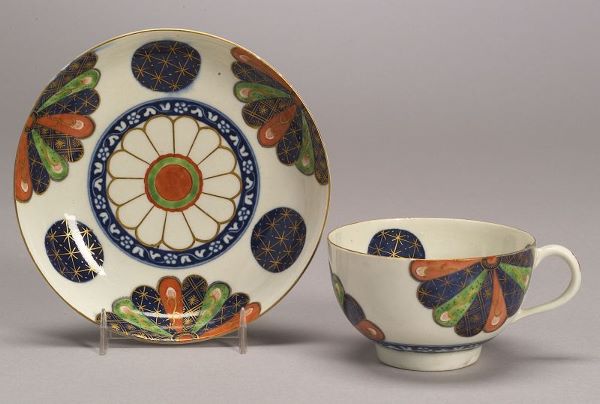 from the same period, circa 1770, would sell in the range of $400 - 600. Though you may want to doublecheck the mark because Worcester went on producing this pattern until about 1910.