Customer Question
I have a Rolex watch...
I have a Rolex watch that was my father's who recently passed away. I want to sell it but I'm not sure if it's more money for just the gold or from a jewelry store who wants the watch.
ON THE FRONT
Oyster perpetual motion
day date

My name is XXXXX XXXXX I am a Personal Property Appraiser specializing in household collectibles & antiques and I am here to help! A few questions: (1) Do you have an idea of the watch's age? (2) What is the condition? A photo of the watch would be extremely helpful in identifying it & giving you a value. I look forward to hearing from you. Thank you.
Customer reply replied 10 years ago
The watch is at least 30years old. He told me that it was a gift some a client is Arabia (?). 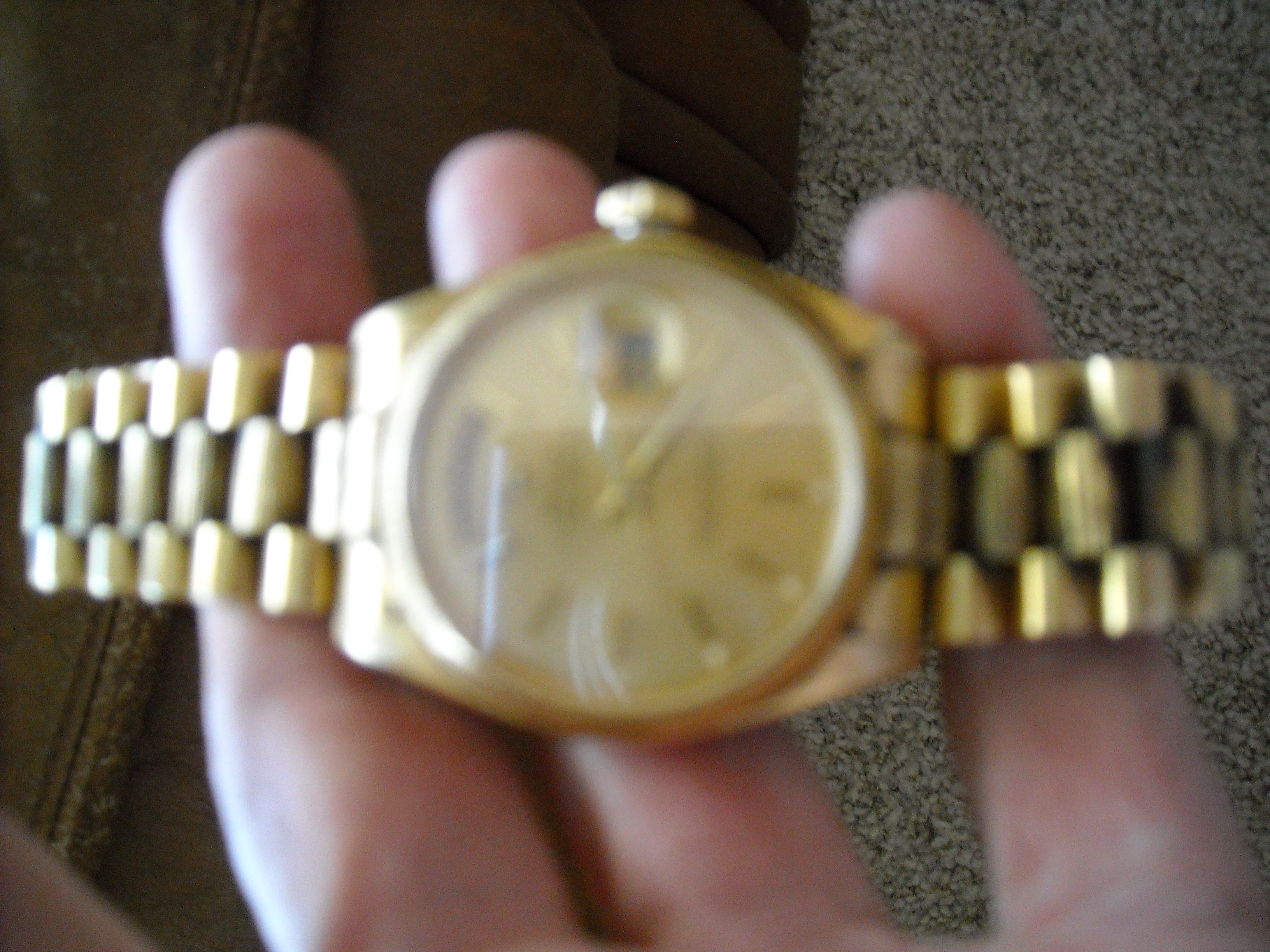 Antique Expert: habitatarn, CollectiblesResearch replied 10 years ago
Thank you for the photo. I'll be able to do the research tomorrow, May 8, in the late afternoon - early evening. I'll be back to you within the next 24 hours. Is that time frame acceptable?
Customer reply replied 10 years ago
Sounds good, thank you

Antique Expert: habitatarn, CollectiblesResearch replied 10 years ago
Thank you for sending the photo as it was helpful in identifying the correct Rolex model. The crystal appears to be rather cloudy in the photo. I'm not sure if it's your camera or if it's actually cloudy as it appears. This could affect the value should you decide to sell it. An 18K gold Rolex Oyster Perpetual men's watch with day/date display has sold for $4500 to $7650 depending on market conditions and actual overall watch condition. You may want to start on the high end so you have room to negoiate and get a fair price. With gold prices being high, you might take it to your local jeweler to weigh the gold to determine if that would yield better returns. I would check both options before making your final decision. Let me know if you have any further questions. If you're interested here is some information on Rolex:

In 1905 Hans Wilsdorf and his brother-in-law AlXXXXX XXXXX founded "Wilsdorf and Davis" in London.[8] Their main business at the time was importing Hermann Aegler's Swiss movements to England and placing them in quality watch cases made by Dennison and others. These early wristwatches were sold to jewellers, who then put their own names on the dial. The earliest watches from Wilsdorf and Davis were usually hallmarked "W&D" inside the caseback.

In 1908 Wilsdorf registered the trademark "Rolex" and opened an office in La Chaux-de-Fonds, Switzerland.[8] The company name "Rolex" was registered on 15 November 1915. The book The Best of Time: Rolex Wristwatches: An Unauthorized History by Jeffrey P. Hess and James Dowling says that the name was just made up.[9] One story, never confirmed by Wilsdorf, is that the name came from the French phrase horlogerie exquise, meaning "exquisite clockwork"[10] or as a contraction of "horological excellence". Wilsdorf was said to want his watch brand's name to be easily pronounceable in any language.[7] He also thought that the name "Rolex" was onomatopoeic, sounding like a watch being wound. It is easily pronounceable in many languages and, as all letters have the same size, allows to be written symmetrically. It was also short enough to fit on the face of a watch. [

In 1914 Kew Observatory awarded a Rolex watch a Class A precision certificate, a distinction which was normally awarded exclusively to marine chronometers.[7]

In 1919 Wilsdorf left England due to wartime taxes levied on luxury imports as well as export duties on the silver and gold used for the watch cases driving costs too high[10] and moved the company to Geneva, Switzerland where it was established as the Rolex Watch Company. Its name was later changed to Montres Rolex, SA and finally Rolex, SA.[8] Upon the death of his wife in 1944, Wilsdorf established the Hans Wilsdorf Foundation in which he left all of his Rolex shares, making sure that some of the company's income would go to charity. The company is still owned by a private trust and shares are not traded on any stock exchange.[10]

In December 2008 the abrupt departure of Chief Executive Patrick Heiniger, for “personal reasons”, was followed by a denial by the company that it had lost 1 billion Swiss francs (approx £574 million, $900 million) invested with Bernard Madoff, the American asset manager who pleaded guilty to an approximately £30 billion worldwide Ponzi scheme fraud.[11]

Customer reply replied 10 years ago
Thank you for the help. The crystal is clear, just a bad picture.
I do plan on selling it and will take your advice and take it to get an estimate of the price based on weight. How do you find where to sell it as a Rolex and not just for the weight of the gold?

Antique Expert: habitatarn, CollectiblesResearch replied 10 years ago
I believe the best way to sell is on e-Bay since you have a global audience & Rolex has worldwide admiration as a status symbol. List it for the high end of the range I gave you & don't put in a "Sell it Now" price since that may cause you to limit your final selling price. If you've never sold on e-Bay you should open a PayPal account for safe cash transfers when you sell it. There are lots of Rolex watches for sale on e-Bay so you'll want to list it for 7 days at a time. If it doesn't sell the first time, keep re-listing it. Last time I sold an item I re-listed it 4 times before it sold so don't get discouraged. One more important thing - take several good up close photos with good lighting in sharp focus. Very important that a buyer can see the watch in detail. Best of luck in selling it!

Verified
habitatarn and 87 other Antiques Specialists are ready to help you
Ask your own question now
Was this answer helpful?
Yes
No

Will
Executive Director
Bachelor's Degree
13,426 satisfied customers
Show more
Disclaimer: Information in questions answers, and Show Less
Disclaimer: Information in questions, answers, and other posts on this site ("Posts") comes from individual users, not JustAnswer; JustAnswer is not responsible for Posts. Posts are for general information, are not intended to substitute for informed professional advice (medical, legal, veterinary, financial, etc.), or to establish a professional-client relationship. The site and services are provided "as is" with no warranty or representations by JustAnswer regarding the qualifications of Experts. To see what credentials have been verified by a third-party service, please click on the "Verified" symbol in some Experts' profiles. JustAnswer is not intended or designed for EMERGENCY questions which should be directed immediately by telephone or in-person to qualified professionals.