Customer Question
We have an antique Japanes...
We have an antique Japanes vase with what appears to be a manufacturer's mark on the bottom made of 4 symbols. The vase is white with gold trim at the top and stand 10 1/4" high. It is largely a flowered vase but has a scene of 5 women in a garden. There is no country of origin on it so I am assuming the vase predates 1887. How can we determine whe the vase was made and its value?
Submitted: 10 years ago.Category: Antiques
Show More
Show Less
Ask Your Own Antiques Question
Share this conversation

Hello! My name is XXXXX XXXXX I would be happy to help you with your vase.

First, could you post a picture (click on the paperclip icon and follow the easy instructions) of both the vase and the marks on the base.

The sharper in focus the better.

My tip for taking close-ups is to put the camera on the table, set it to 'manual focus', no flash, focus right down as far as it goes then place the object (the vase base) on the table in strong angled light and just draw it slowly towards the camera lens until it looks sharp then take the photo! Works every time as everything is stock steady on the table!

Thanks and wait to hear, 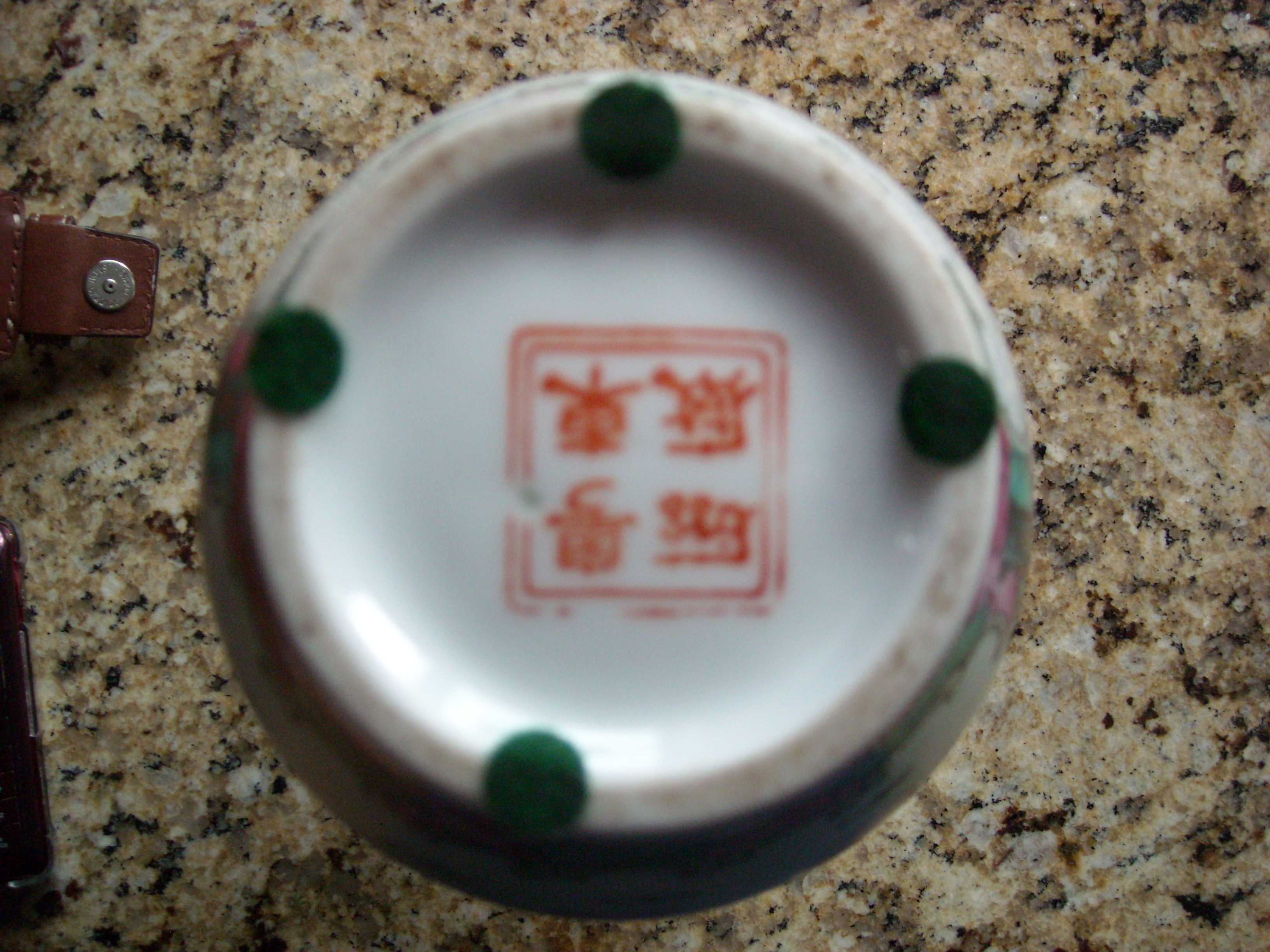 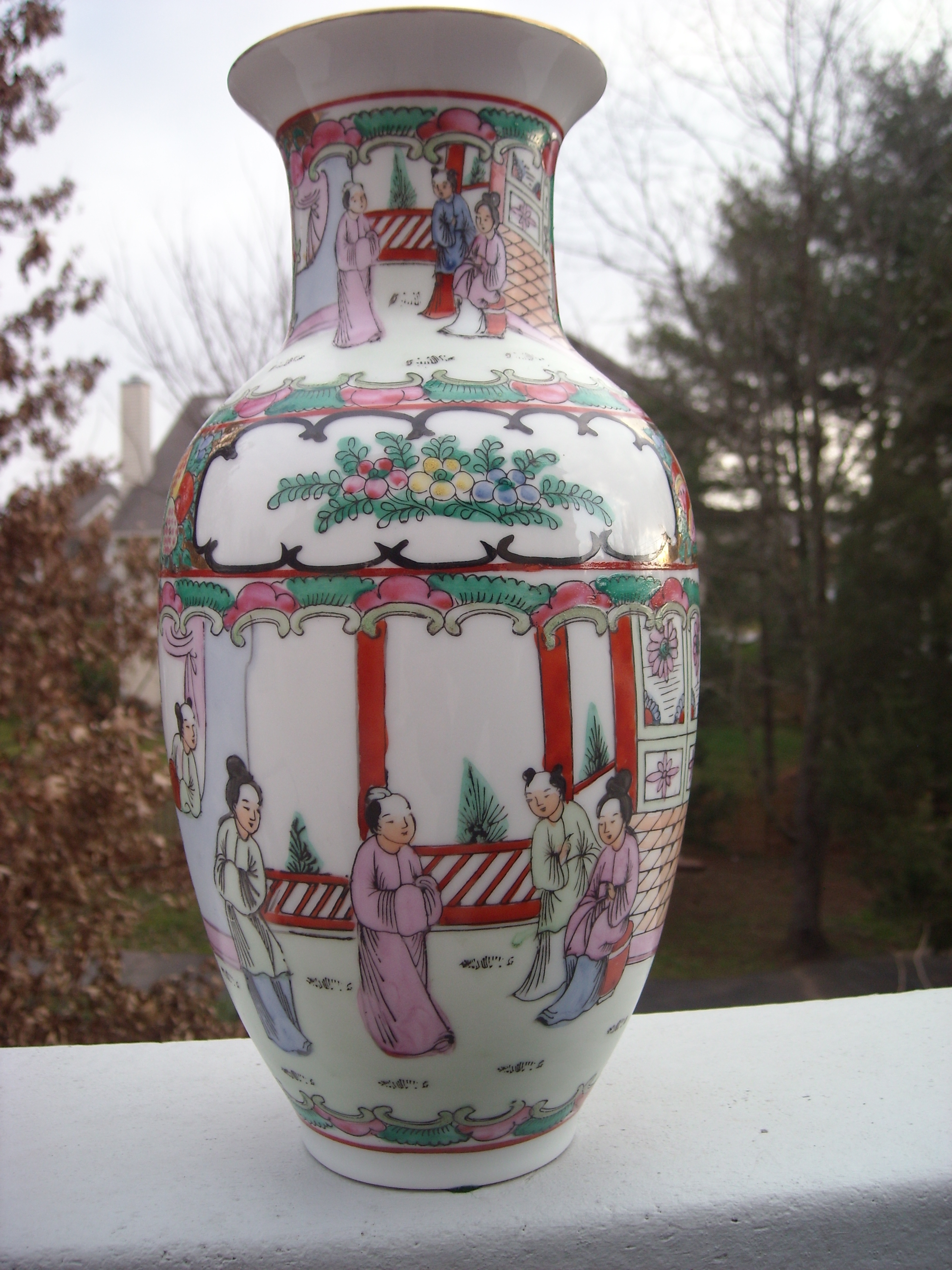 Not sure why these pictures took up the entire reply space as I followed the directions for attaching a file. Let me know if these suffice. If not I'll zip them and attach.

The photos are great and all I need. Thank you.

I have to go offline for a while but will be back with a full answer for you as soon as possible,

Your vase is Chinese not Japanese, but you would be forgiven for thinking it was as it is Chinese copying Japanese who were themselves copying old Chinese famille rose decoration. Very confusing!

It is actually a nicely decorated piece of Cantonese export china dating from the first quarter of the twentieth century. The red characters on the base read Yue-dong Qi Chang -or East Guangdong Porcelain Factory. Guangdong is a province in southeast China on the border with Hong Kong.

In the era of tea clippers and until the arrival of the Chinese Republic, both Guangdong and its capital Guangzhou were more commonly referred to on maps
and in spoken English as Canton. This usage continues today but to a
much lesser extent with the transliterated Chinese name being used instead.

The red seal mark, as well as the decoration on the vase itself, is typical of what became known after WWII as "Hong Kong decorated" porcelain, often with blanks made in Japan, shipped to Guangdong to be decorated and then shipped to Hong Kong to be sold.

My guess is, yours was bought in Hong Kong (or perhaps Canton) sometime in the 1920s and brought home as a cherished souvenir from a trip to the Orient.

Now that China is booming there is a growing interest (from the Chinese themselves!) in export china from this era (early Chinese Republic) and I expect to see values going in the right direction (ie up!).

At the moment, at auction here in the US, if listed with the details I have given you, I would expect it to fetch between $75 and 120. You would pay up to double that if you were to buy it from an antique store.

I do hope this helps!
Happy New Year

PS Please remember to hit the ACCEPT button (at no extra cost to you) if I have been of any help as I ONLY get paid
by JustAnswers for my time and services if you do. Thank you!

Carol Tollefson
Antiques Appraiser
50 Years Antiques/Fine & Decorative Arts
1,153 satisfied customers
For JeremiahS226 I have floor vase that is flasked-shape
ForCustomerI have floor vase that is flasked-shape standing 15 inches high and is 31 inches in diameter and a Meissen vegetable dish. The vase is flat on the front but round elsewhere. I got it from m… read more

CASSOC (Randi)
Certified Appraiser
Vocational, Technical or Trade Scho
1,522 satisfied customers
Show more
Disclaimer: Information in questions answers, and Show Less
Disclaimer: Information in questions, answers, and other posts on this site ("Posts") comes from individual users, not JustAnswer; JustAnswer is not responsible for Posts. Posts are for general information, are not intended to substitute for informed professional advice (medical, legal, veterinary, financial, etc.), or to establish a professional-client relationship. The site and services are provided "as is" with no warranty or representations by JustAnswer regarding the qualifications of Experts. To see what credentials have been verified by a third-party service, please click on the "Verified" symbol in some Experts' profiles. JustAnswer is not intended or designed for EMERGENCY questions which should be directed immediately by telephone or in-person to qualified professionals.